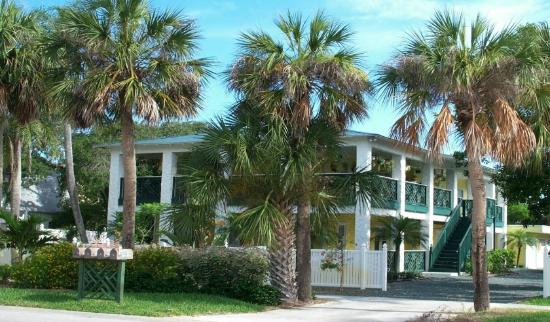 Did you know that parrots are the third most popular pet in the world? Trouble is they live a long time. Cockatoos and Amazonian parrots can reach the age of 75 or older, so there are a lot of bird castaways. In a cozy Dutch colonial house in Melbourne Beach, Fla., Luann Apple provides a home for the unwanted exotic birds often nursing them back to health. Birds like Woody, a glorious blue and gold Macaw that now flourishes in this healthy tropical setting. Apple’s ultimate goal is to ready the birds for adoption, finding them a good home which bestows a lot of love. 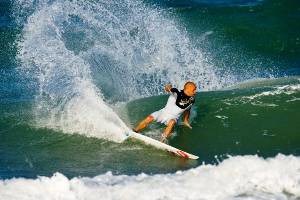 My wife Jane and I discovered the parrot sanctuary on a stroll down Ocean Avenue on a recent visit to the ocean-side community. Located on the barrier island between the Indian River and the Atlantic Ocean, Melbourne Beach (pop. 3.600) offers unspoiled beaches with sparkling blue-green waters with large dunes blanketed with sea oats and native wildflowers.

It’s truly a taste of Old Florida charm and ease.

Tucked at the southern end of Florida’s “Space Coast,” Melbourne Beach is Brevard County’s oldest beach community, and is named after the famed Australian coastal city. 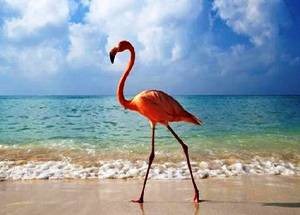 Travel two-lane A1A fifteen miles south and you come to Sebastian Inlet State Park, the crown jewel of Florida’s state parks. Sebastian’s jetty break is recognized as one of the surf world’s high-performance hot spots. The inlet has been home to at least three generations of world-class surfers, including six-time world champion Kelly Slater. Monthly events and big-name surf camps are staged here as is the Sebastian Inlet Pro– a five-star World Qualifying Series competition that draws some of the biggest names in the sport each January.

In 1994 a part time treasure hunter, diving in eight feet of water about 100 yards from the wave break “First Peak” found $1 million worth of jewels and gold coins from a Spanish galleon that sank more than 250 years earlier.

In town, Longboard House has been around since the early 1960’s and stocks more than 1,000 surfboards and paddle boards, shipping them everywhere. In the “Green Room,” you will find artistic boards, functional ones and eco-friendly boards. In addition, they can custom design boards to your specifications.  Longboard also offers a nice clothing selection, top name brand beachwear and quality accessories, though it can be a bit pricey.  Not a touristy spot, very local and very friendly. Worth a visit.

We chose Pineapple Manor as our home base, a hidden gem conveniently located in the heart of Melbourne Beach.  Dating back to 1905, it was one of the first homes to be built on Ocean Avenue.  It’s a mere two-block walk to the ocean and sits across the road from a picturesque riverside park and the Indian River. Lushly landscaped, the four-unit Manor is lovingly maintained by Mark and Kathy Emerson. Beach chairs and umbrellas are supplied and the kitchen is fully stocked– just add groceries– to prepare home cooked meals. A nice touch is the biscotti to kick off your day. We stayed in the two-bedroom unit that was pristine with newly refinished and positively gleaming wooden floors. You will find matching rockers outside your door to revel in the gorgeous tropical setting.

A gourmet market is a few blocks away. Melbourne Beach Market opened in 1999 when Charlie Zubi and his family moved here from Chicago. The market provides a relaxing, friendly environment where customers pick up everyday necessities and stop by to talk to the butcher about the large assortment of fresh butchered meats, all hand trimmed and wrapped and cut to your liking. You will also find a wealth of fresh seafood, including mahi mahi, salmon, sea scallops, lobster tail and crabs in season. The market’s Chef’s Corner is celebrated for its white and Greek pizza. They showcase 25 different olives, more than 40 international cheeses and an impressive selection of bakery goods. The wine selection is excellent featuring vintages from small wineries from around the globe. In addition, there is an impressive round-up of hand-crafted and international beers. 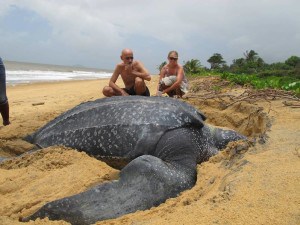 A1A is one of America’s magical roadways. Riding south from Melbourne Beach’s  compact business area brings you to a series of secluded and undeveloped natural beaches that border the turquoise waters. Built to help preserve the natural environment, Bonsteel Park’s two-acre beach provides an excellent vantage point to catch glimpses of passing dolphins and sea turtles in season. Coconut Point Park is home to great blue herons, roseate spoonbills and great egrets as well as an  impressive roster of shorebirds such as gannets, red-throated loons, red knots and black-bellied plovers.

Second most important loggerhead nesting beach in the world

The Archie Carr National Wildlife Refuge is considered the most important  nesting area for loggerhead turtles in the western hemisphere and the second most important loggerhead nesting beach in the world. As many as 1,000 nests per mile have been recorded. Turtle season starts on March 1; however, it really gets busy later in April and May. If you go during the day, you will often see the tracks where the females lay their eggs. If you go at night, avoid flashlights as the turtles spook easily. The refuge is also home to the gigantic leatherback sea turtles.

Located in the heart of Archie Carr, the Barrier Island Sanctuary Land Management and Education Center is a 34-acre sanctuary that provides hands-on educational experiences for visitors through interactive exhibits, nature films, special programs and a one mile long “dune-to-lagoon” nature trail.

Kayaks, canoes, fishing craft, pontoon boats and the occasional paddle board dot the spectacular palm-lined shoreline. A fair amount of those watercraft are headed to Sebastian Inlet State Park which connects  the Indian River Lagoon with the Atlantic Ocean, covers over 600 acres and spans both sides of the inlet.

The mile-long Hammock Trail winds through a coastal, subtropical, palm and oak hammock and along the fringe of the mangroves. Visitors have a chance to view over 180 species of birds such as jaegers, shearwaters and petrels during the course of the four seasons.

In the water surrounding the park, Atlantic bottlenose dolphins are commonly seen. Manatees inhabit the waters from March to October. The right whale, the most endangered whale species in the world (only 300), can sometimes be observed traveling close to the coast during January and February.

Sebastian’s premier surfing spot, First Peak is where many professional surfers have honed their skills. Another is Monster Hole, about a third of a mile off the beach on the south side. The contour of the ocean floor rises up when the surf is big here, giving long rides. The flat-topped Sebastian jetty makes an ideal vantage point for spectators, surf photographers and fishermen. The premier saltwater fishing spot on Florida’s east coast, snook, redfish, mackerel, flounder, sheepshead, drum and many other fish thrive in the inlet water’s jetties. 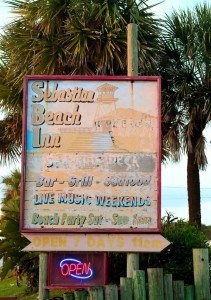 Five miles back north on A1A brings visitors to the legendary Sebastian Beach Inn. Housed in Brevard County’s last remaining Coastal Watch Station, the site was used as a “safe haven” for seafarers from 1903 to shortly after WWII,  as well as housing the men that guarded our shores. A movie producer named Bert Green took over in the 1950’s and invited many of his Hollywood friends to come and party overlooking the turquoise ocean. Today, SBI is a hot spot for high energy bands, pub grub with an island twist and chilled libations on weekend afternoons. Order up a Bahama Mamas, SBI’s original drink. Over the past four decades some of the greatest bluesmen have performed here, including Edgar Winter, Leon Russell, Greg Allman, Savoy Brown, Dr. Hook and Spirit. Boasting a sprawling timeworn mahogany bar inside, you’ll find their signed photographs hanging on the wall. On a dazzling Sunday afternoon we caught Hot Pink with an impressive repertoire that ranged from Stevie Wonder to Elton John, David Bowie to Mott the Hoople, The Doors, and the Stones.

Back in “downtown” Mel Beach you can enjoy those fresh catches at the Ocean 302 Bar & Grille. Opened in late December, it’s owned by Charlie Zubi and is next door to his market at the top of Melbourne Beach. There are cozy booths, large and small tables or you can sit at the bar overlooking the kitchen and watch the food being prepared.  The menu is quite imaginative, and offers a bevy of farm to table selections. The pig and fig pizza caught our eye– a combination of pork, cheese, figs, caramelized onion, pecans and aged balsamic vinegar, as well as the sloppy short rib sandwich with duck fat fries. Ocean 302 offers 20-plus beers on tap and, as you would expect from the Zubi family, a superb wine selection too.

Stroll west on Ocean Avenue a few blocks and you arrive at Djon’s, a local favorite that draws business folks and surfers alike. Start with a drink on the patio by the cozy fire pit surrounded by multiple sofas– a great place to meet new folks. On our visit we chatted with Brad Stein, Melbourne Beach’s world champion ballroom dancer and an antiques dealer. We ordered their house salad, snapper special, and a filet mignon that were all standouts. Head over to the piano bar in the lounge, it’s a great spot for an after dinner drink.

If you time your visit to Melbourne Beach correctly, you might even view a spectacular rocket launch. Private rocket companies such as SpaceX or Blue Origins are revolutionizing the business and technology behind space travel by reusing rockets, dramatically reducing the cost of space flights. Launch. Land. Repeat. There is nothing on earth like a rocket launch (especially at night), and Cape Canaveral is just 30 miles to the north. Blast-off! Another slice of this special destination on the Space Coast.