My wife Barbara and I were in Baltimore, Maryland, recently while I took care of some business there.  Fortunately, it was long enough, to enjoy some of what this great city has to offer. 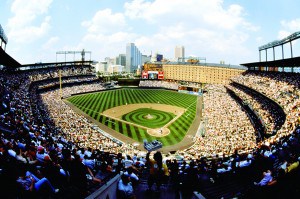 The Babe is remembered fondly in his hometown and the attraction is well worth a visit even if you’re not an “old-time” baseball fan.  We’ve stayed in a number of Hampton hotels over the years, but this was definitely one of the best.  Our room was large and comfortable and the service was exceptional.  The staff arranged for evening transportation with a limousine service (both to and from our restaurant and theater).We felt like celebrities being driven around town in a limo. 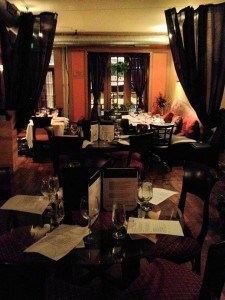 A Baltimore friend had recommended a little Greek restaurant called Waterstone.  We were welcomed at the door by the General Manager Lisa Markiewicz.  The dining room is cozy, the lights low, and the decorations romantic.  Definitely a place to take your sweetie.  The menu is large and comprehensive — 14 entrees including a “Fish of the Day” (which comes with the head and tail and lots of flavor), 18 tapas (small plates that are actually good size), and 13 salads.  They also offer a three course Prix Fix menu for just $26.99.  The Greek food is wonderfully seasoned and has all those marvelous flavors of the Mediterranean.  They also offer an excellent selection of wine. Barbara had the Grilled Salmon, while I had the Lamb Chops.  For dessert we had the best Baklava we’ve ever tasted.  We told our limo driver about our experience and he will pass it along to future riders. <waterstonebarandgrille.com>.

The following morning we visited the Baltimore Museum of Art.  It has just opened a new contemporary art wing we were anxious to see. If you’re an Andy Warhol fan you’ll love it.  But there are also plenty of other excellent artists represented as well in the collection.   We particularly enjoyed a colorful work by Walead Beshty titled “Four Magnet, Three Color Curl.” 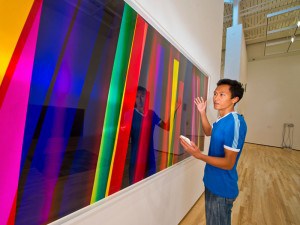 Walead Beshty’s colorful work at the Baltimore Museum of Art

Not to be missed is the Cone Collection of impressionist and postimpressionists works by Matisse, Picasso, Pissarro, Courbet, and Degas. The wealthy Cone sisters of Baltimore were personal friends of Henri Matisse and collected many of his paintings now a part of the Museum’s permanent collection.

While at the Museum we enjoyed a wonderful meal at Gertrude’s (the upscale house restaurant) which features the best of Chesapeake Bay cuisine.  Barbara had some tasty fried oysters and I had an excellent oyster stew. Afterwards, we shopped at the museum store for holiday gifts.

That evening we went to see the Tom Stoppard play “Hero’s.” Everyman Theatre is a professional theatre celebrating the actor, with a resident company of artists from the Baltimore/Washington, DC area. It is dedicated to engaging the audience through a shared experience between actor and audience seeking connection and emotional truth in performance.  In January, it will move to a large fully restored and state-of-the-art theater in the arts district downtown.  Everyman’s new home opened as The Empire in 1910 with vaudeville performances and later hosted Yiddish theatre, boxing, and bingo parties.  In 1947, the building was redesigned into a 1,550-seat movie house, The Town Theatre.  A glittering opening of the now-classic film “It’s a Wonderful Life, “ was held here attended by star Jimmy Stewart and director Frank Capra. By 1990, The Town was in disrepair, closing its doors and remaining vacant for 16 years until it was donated to Everyman Theatre in 2006.  Now, actors will again enliven the space and summon the original spirit of the building.

Baltimore is a great city and deserves much more time.  We hope to return again soon and encourage others to visit. See <Baltimore.org>.