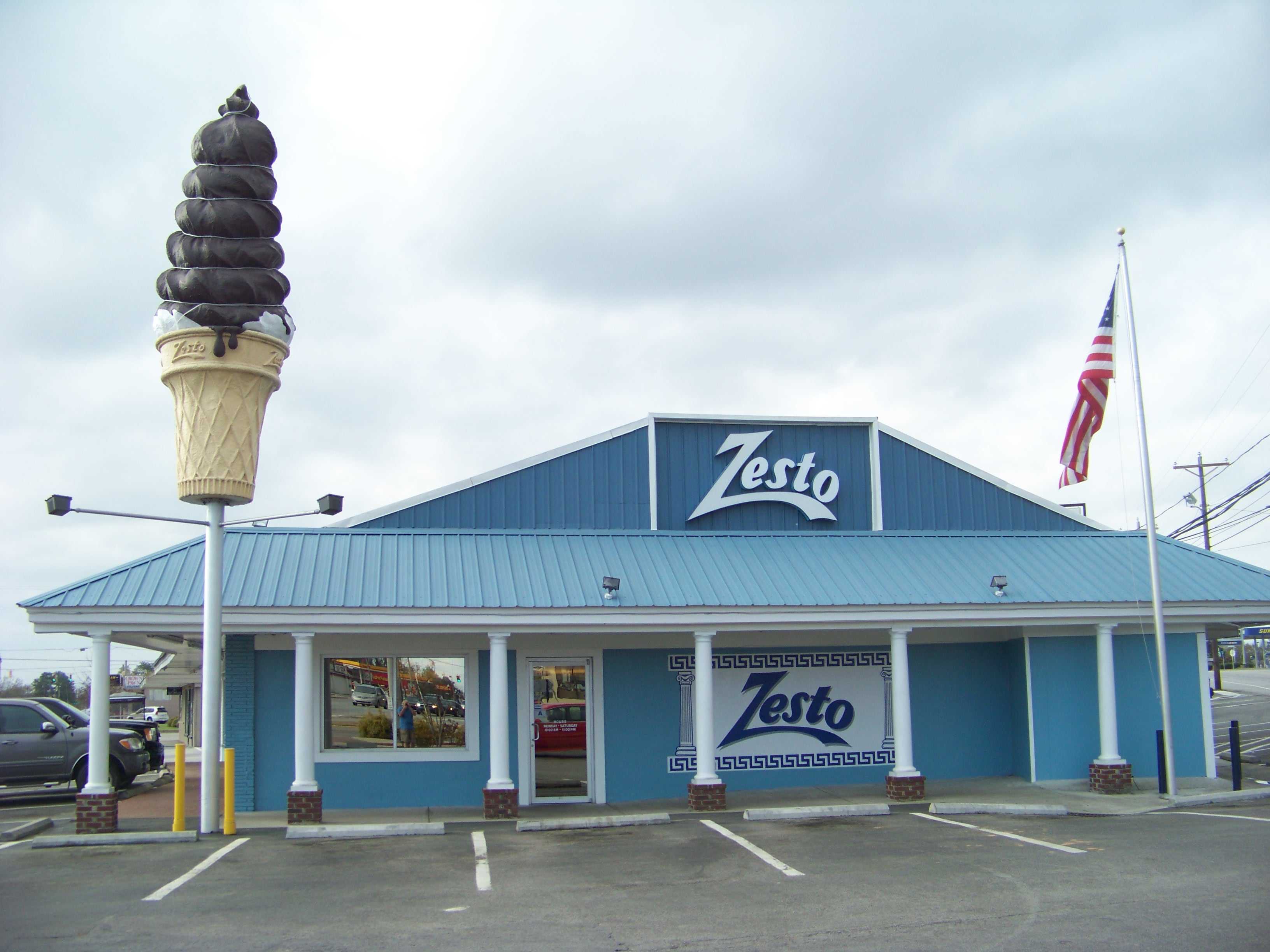 and Professional Ice Cream Taster Will A. Davis–

Zipping back and forth between our hotel in Cayce and the many attractions in and around downtown Columbia, we spotted glimpses of a giant swirl cone. Vanilla ice cream dipped in chocolate lighting up the sky. Following this beacon… we could have just as well followed the traffic and it wasn’t even summer! Bingo! A crazy number of cars dodging in and out of what seemed like a large number of parking spaces but not enough for this crowd. We had arrived at Zesto’s Ice Cream and Restaurant.

Never people to pass an ice cream opportunity, we pulled in to discover that Zesto was a lot more than ice cream. There seemed to be a string of dining rooms perhaps additions as the business grew and grew.  I’m still a little confused about the ordering system but the front counter seemed to be for ordering to-go food and ice cream varieties and inside you order food from the same menu to sit and eat or you could bring in your ice cream from the front and sit.

A local landmark for over 65 years, picking up our cones we decided to sit and absorb the atmosphere while consuming the soft serve.  Our “server” busy cleaning tables and filling salt shakers was very friendly and said she had been at this location for 34 years. I said you must love working here and she confirmed that these were wonderful employers!

Zesto is locally famous for their broasted chicken, hamburgers and ice cream all self-ordered to the plethora of counter people. If you choose to dine in you can sit at one of the many tables that punctuate that this is a family style restaurant. There is no tipping and the staff bring your meal or treat to you. It’s relaxing and fun, the food is really good and you can take out if you want to and many do. We saw huge platters of chicken, apparently the corn dogs are a weekly regular for some customers along with the dairy treats.

A little background to Zesto:

Zesto was a chain of restaurants featuring ice cream and frozen yogurt. Several Zesto restaurants continue to operate today, but they are independently owned and no longer part of an organized chain. Zesto was started by entrepreneur and inventor L.A.M. Phelan as a national franchise chain. Phelan was head of the Taylor Freezer Corporation, which in 1945 had developed the “Zest-O-Mat” frozen custard machine, and franchise agreements granted exclusive use of the Zest-O-Mat machines in a given territory under the Zesto name. The first known Zesto Drive-In opened in Jefferson City, Missouri and dozens more opened in the late 1940s and early 1950s, mostly in the U.S. South and Midwest.

If you happen to visit Columbia make Zesto one of your “must do” stops. It’s like a step back in time when food, service and price went hand in hand and made these types of businesses popular. It will bring back memories of before we became a fast food nation. Give it a shot and if you see us be sure to say Hi!