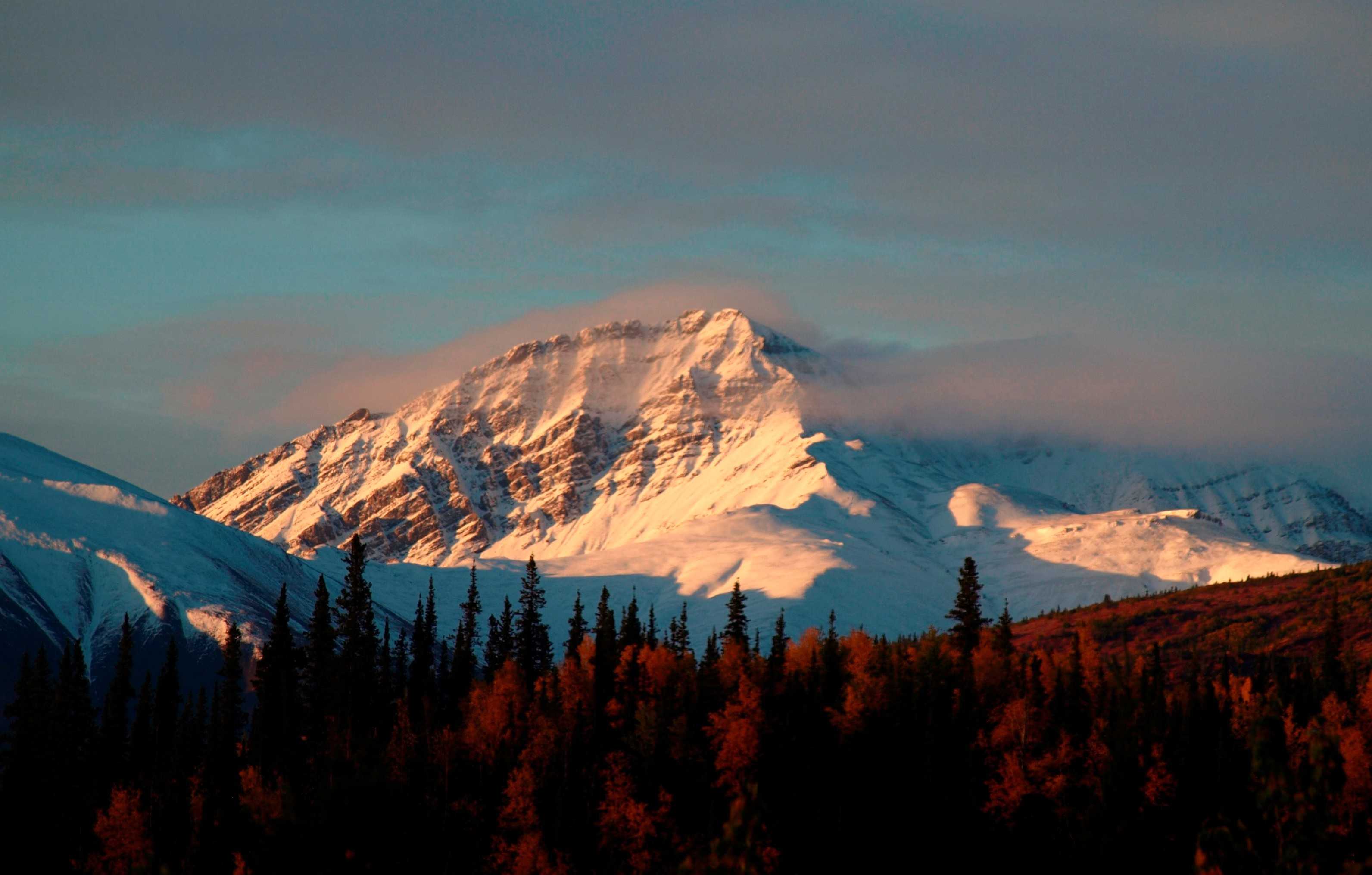 This is part two of a multi-story journal of 16 day trip that my wife, Bev, and I took to Alaska. Part one ended with a last minute call from Mary, the owner and manager of the Seward Hotel in Seward. We were about to board the Alaska Marine Highway Ferry from Whittier to Valdez when my cell phone rang. Mary had a cancellation for one of her hotel rooms, which included a guided fishing trip the next day on the Russian and Kenai Rivers. 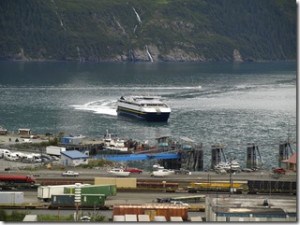 We quickly chose to turn in our ferry tickets and head to Seward. How could we turn down an offer that included a fishing guide? We headed to the Whittier Tunnel and caught the 11:00 a.m. opening through the mountain. The tunnel is a one lane tunnel that also includes the Alaska Railroad tracks. The tunnel is open in opposite directions on a half hour schedule and it is closed to vehicle traffic when the train is scheduled to pass through in either direction.

The weather turned from light rain to heavy downpours as we drove to Seward, but the scenery was spectacular despite the rain. Mountains rose from sea-level to heights of one to two thousand feet to our right and higher mountains towered over us to the left with patches of snow painting the landscape with touches of white. An occasional glimpse of a distant glacier filling a valley added to the enjoyment of the ride. The mountain tops were often shrouded in clouds adding to the photo opportunities. We stopped at Summit Lake Lodge for a late afternoon lunch. The waiter raised my excitement relating that the lake provided many species of fish for the lodge and cabin guests. 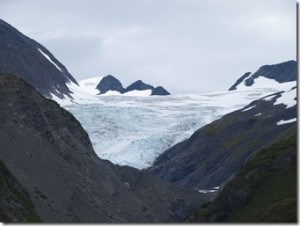 A glacier fills a valley between Whittier and Seward.

Intermittent rain continued during the rest of our trip. We arrived in Seward about 4:00 in the afternoon. Seward if located on the Kenai Peninsula. The population is about 3000. Seward is named for William H. Seward, Secretary of State under Abraham Lincoln and Andrew Jackson. Seward fought for the purchase of Alaska from Russia in 1867. Most of our country felt it was a foolish idea to buy a vast wilderness and Alaska’s purchase became known as “Seward’s Folly.”
It’s only our second day in Alaska, but we definitely have to agree with William Seward. The purchase of Alaska was a great idea with good forethought on Seward’s part and certainly not a folly. The city of Seward traces its beginnings to the establishment of a fur trading post on Resurrection Bay in 1793. We stayed in a refurbished trapper’s cabin on a cliff overlooking Resurrection Bay and the Seward harbor during our second night in Seward. Seward is also mile zero of the famous Iditarod sled dog race.
We met with our fishing guide, Wes, The Fish Slayer, after dinner. He described our fishing destination and outfitted us with hip boots. We were heading to the Russian River and Kenai Rivers for the possibility of catching silver salmon, sockeye salmon, Arctic char and Dolly Varden trout. We met fellow writer Gary Moore and his wife Linda, from Vermont, who would be joining us during the fishing trip.
Bev and I split a hardy fisherman’s omelet in the hotel dining room following a great night’s sleep in the comfortable and enchanting Seward Hotel. We met Wes, Gary and Linda in the Lobby at 8:00. Wes led our three car caravan from the Seward Hotel back toward Anchorage on Route 9 bearing left on Route 1 to Cooper Landing. We picked up sandwiches and one day Alaska fishing licenses at the Copper Landing Bait and Tackle Shop before heading to our fishing destination.
Our next stop was the Russian River Ferry parking lot. The plan was to take the manually operated ferry across the Russian River to the long narrow peninsula separating the merging of the Russian River into the Kenai River.
Our plans changed when a young playful brown bear (same as grizzly, but they are called brown bears near the coast where the bears eat mainly fish) was swimming near the platform where the ferry docks on the other side of the river. The bear estimated to be about three years old was dunking for salmon, floating about 50 yards down the river with the current and then walking back to the platform usually with a fish in its mouth.

A young brown bear blocks the manual ferry from traveling across the Russian River.

It was a great photo opportunity. I took about 30 photos of the bear during the time we spent at the ferry entrance. Several guided raft groups were treated to the same bear reality show. Of course, we had the luxury of being on safe solid ground on the opposite river bank. The current quickly carried the rafters on downstream without much time for photos. After about 20 minutes of watching the brown bear antics we went to another area of the Russian River to fish.
Wes called this part of our adventure “Walking with Fish,” as we waded across a small back water portion of the Russian River to fish from the shores of an island. Sockeye salmon were everywhere bumping against our hip boots as we carefully waded through the water. Our primary species of choice was silver salmon. They were still solid fish on their way upstream to spawn. We used 6X fly rods with a sinker and a streamer. 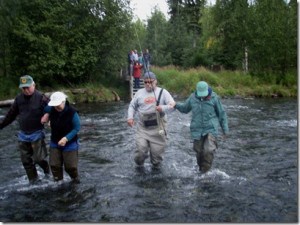 Walking with salmon; migrating coho salmon dart in every direction.

Gary caught the first fish. It was a Dolly Varden. We were taking turns with two fishing at a time in a deep hole below a tree trunk on the opposite side of the backwater stream. I soon had a hit, but the tug quickly changed to a slack line. I was throwing my line upstream from the hole and mending my fly line downstream to allow the streamer to bob along naturally with the current near the stream bottom. Wham, I had another strong hit, this time I brought in my first Arctic char. The coloration and the white tipped fins looked similar to our Pennsylvania State Fish, the brook trout. Our brook trout is a char. 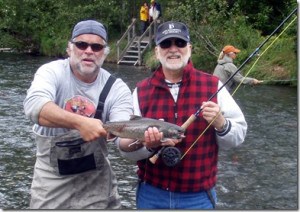 Guide, Wes, on the left holds my Arctic char for a photo opportunity.
Bev took a turn with me at the hole while Gary watched. After a few minutes and some hints from Wes, Bev latched onto a sockeye. Wes instructed Bev to slowly back up toward the island bank and to keep the rod tip up and keep a tight line. Soon a red sockeye was flapping its tail in the shallow water. Wes unhooked the sockeye and it returned to the hole. Gary and I caught a few more sockeyes before we left the Russian River to return to Seward for some silver salmon snagging in the Resurrection Bay inlets. The limit in the rivers was one silver salmon per day, but six silvers a day was the limit at the mouth of the inlet streams. Bev had visions of sending a cooler full of salmon home.
I called my Godson, Gene in Anchorage and he and his father, my lifelong friend Gene Zalutsky, drove to Seward to join us for some silver salmon snagging and to stay with Bev and me that night in the trappers cabin on the cliff. We were not that excited about snagging fish, but the thought of fresh silver salmon cooking on the cabin’s grill made the experience more enticing. The tide was going out as we all followed Wes to the inlet.
Check out Alaska, Part 3 to find out more about our fishing adventure and our days in Alaska.