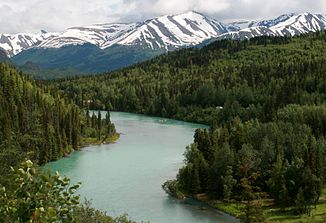 By Bud Cole
This is part 3 of a multi-story journal of a September trip to Alaska. In part 2 we fished on the Russian River about 25 miles northeast of Seward. The stream was full of sockeye salmon, but most of them were nearly exhausted and weakened from their migrations upstream to spawn. King salmon, silver salmon, Dolly Varden trout and Arctic char were also in the Russian River. We were planning to ferry across the Russian to fish the Kenai River, but an approximate three year-old brown bear playing on the far bank’s ferry platform quickly changed our plans. 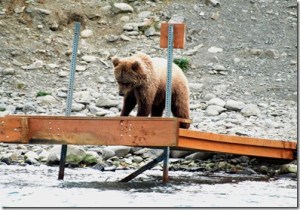 We left the Russian River about 3:00 p.m. and headed back to the Seward Hotel to change fishing equipment. Snagging silver salmon was legal at the mouth of the streams flowing into Resurrection Bay in Seward. We dropped off our fly rods and headed to the inlets with heavy duty spinning outfits. We were not too keen about snagging fish, but the possibilities of filling a cooler or two with fresh silver salmon changed our minds about this particular method of fishing.

The daily limit for silver salmon in the tributary streams is one while the daily limit at the inlet and mouths of the streams was six a day. Bev had visions of sending home a few coolers full of salmon. Unfortunately, only our guide, Wes, managed to snag a silver salmon. I had one on, but it tore lose at Wes’s feet as he tried to pull it to shore. Bev, my Godson Gene, and his father Gene, had no luck. Several other fishermen pulled in a few salmon, but everyone said you should have been here last night. It never fails; it seems we’re always a day or a week late!
So, we headed back to our vehicles. Young Gene and I worked the stream on the way back to the parking lot and we each caught several sockeyes, but they were not very healthy looking. Gene did catch a small silver salmon. One small salmon would not do much to appease the appetites of four hungry fisher people, so Gene returned it to the stream. Wes gave his salmon to one of the Native Alaskans that had been fishing in the same area. 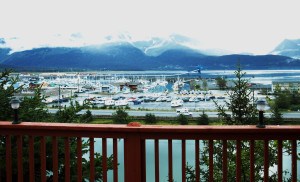 We stopped back at the Seward Hotel to return our rental equipment and to thank our hosts Mary Kulstad and her husband Mark. The hotel staff recommended a good place in town for pizza. I think the name of the restaurant/bar has slipped my mind because we paid $69.00 for one large and one medium pizza to go and two beers and one wine while we waited for our pizza order. We were starting to see why many Alaskans and tourists tell tales of Alaska being quite expensive. 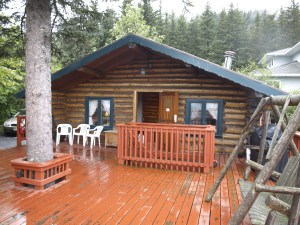 We took the pizzas back to the Cabin on the Cliff, the refurbished trappers’ cabin owned by the Hotel Seward proprietors. The slight rain that began as we headed to the cabin did not interfere with our Alaskan evening. The cabin deck looks out over the Seward Harbor and the six-person gazebo covered spa was very inviting soon after consuming most of our excellent, but expensive pizza dinner.

With spa refreshed bodies we all headed off to dreamland shortly after equally refreshing hot showers. Gene and Gene slept in the lower bedroom connected to our room by a spiral staircase. We were all tired from a long day of fishing and driving. The Weather Channel’s local forecast was not much better than we had experienced the previous evening.

Gene and Gene left the cabin for a day of fly fishing on the Russian and Kenai Rivers as Bev and I headed into town to register a the Resurrection Bay Wildlife Tour. We signed up for the four-hour tour, which included a salmon and ribs luncheon. The buffet and cruise proved to be a bargain when compared to the price of two pizzas the previous night. The cruise had a senior price, but to this point I’ve not found a senior price for pizzas. 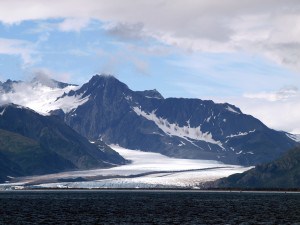 We boarded the tour ship and were soon heading away from Seward and the marina. A number of glaciers filled the valleys to our port (left side) as we cruised through Resurrection Bay. The National Park naturalist discussed the glaciers. Everyone, but one of the local glaciers, is receding and the one that is not receding is just holding its own with the recent warmer winters.

The first wildlife sightings were our very first look at sea otters. Several otters were floating on their backs as if they were in a backyard swimming pool adrift on air mattresses. That highlight was followed by our first sighting of puffins. There were two types of puffins flying around the ship; horned and tufted. Both species were also sitting on the jagged fjord cliffs. For some reason I always thought puffins were larger birds, but they are only about 15 inches long from tail to large orange beak. The puffins’ sighting was followed by a large rock covered with sea lions. A number of Dahl Sheep were observed sitting in the sun on the fjord outcrops shortly after passing the sea lions. 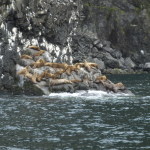 Everyone including the crew was looking for whales when all of a sudden I saw the tail and then the back of what was identified by the naturalist as a humpback whale. It was moving in my direction. I was sitting outside on the back lower deck. I quickly changed lenses and set my camera for a great wide-angle shot. Unfortunately, the whale never reappeared even though the Captain cut the engines and drifted hoping to see the whale surface for air. The Captain called that particular time period, “Waiting for Whales.” I was hoping to see my first killer whale or orca, but none were observed on our cruise.
The naturalist continued to explain various geological features of Kenai Fjords National Park including the glaciers, snowfields and the formation of the bay and fjords as we headed back toward Seward Harbor.
This ends part 3 of our adventure-packed Alaska experience and we’ve only been in Alaska for two and one half days. We headed back to Anchorage during another rainstorm, but the weather was not dampening our spirits. Tomorrow morning we catch the train from Anchorage to Fairbanks. I hope you join me again for part 4 as we travel 12 hours north at approximately 30 miles per hour to Fairbanks on the Alaska Railroad. Let’s hope the weather clears providing plenty of photo opportunities.