Alive and Shucking in Wellfleet 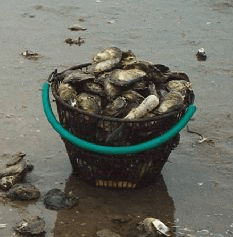 Does any food pack such a powerful sense of place as an oyster? Pemaquid! Apalachicola! Wellfleet!

A working harbor on Cape Cod, Mass., Wellfleet is a noble name in the lineage of oyster towns, home to roughly 100 oystermen and a handful of commercial draggers. It has long been an industry here, thanks to the area’s fertile ecosystem. Local shell-fishermen can be seen tending their extensive grants in the harbor at low tide.

Located on a spit of land 70 miles out into the Atlantic Ocean, Wellfleet is bounded on Cape Cod Bay sifting away to the west.  At the Cape’s narrowest point, Marconi Station, the ocean is scarcely a half-mile from the bay.  Despite its narrow width, Wellfleet is endowed with beautiful, clear spring-fed ponds, known as kettle holes, which were created by glaciers several thousand years ago.

A band of pilgrims landed here in 1763 tabbing the place as “Billingsgate,” after London’s great seafood market. Well-marked trails have transformed a vast area of the peninsula into a pedestrian and cyclist paradise, allowing for up-close looks at the stunning diverse topography of pine forests, marshes, cranberry bogs, and an abundance of exceptional beaches. The meandering tidal creeks and verdant marshes here are perfect for kayak exploration.

A nationally registered historic district, Wellfleet Center boasts buildings that date back to the late 1700s, well before the town’s conversion into first a thriving commercial port and then a bustling tourist destination. The Center tells the stories of Wellfleet’s past—shipwrecks and whaling artifacts as well as  tales of celebrities, including Lorenzo Dow Baker, the man who first brought bananas to America. 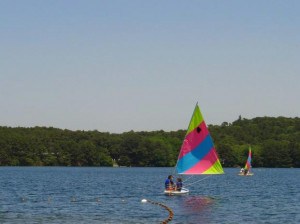 The Center’s shops and eateries are a 10-minute walk down Commercial Street from the Wellfleet Harbor, an actively changing panorama of fishing boats, trawlers, pleasure boats and at low tide, flats of shellfish.

A quintessential snapshot of Cape Cod: gray-shingled cottages set along winding streets that are lined with art galleries representing both local and national acclaimed artists and crafters.  Bookstores and boutiques dwell within its historic residences that are framed with quiet, little gardens of geraniums and impatiens.

The town’s shell-fishermen drive alongside visitors down Route 6, which bisects the town itself.  Nearby Guglielmo Marconi– the Italian physicist who invented wireless telegraphy– built the first radio station on 20 spindly towers on a Wellfleet bluff in 19o1.  Two years later he succeeded in transmitting the first transatlantic wireless message: a greeting from President Theodore Roosevelt to England’s King Edward VII.  At the station, one of the Titanic’s first distress signals was intercepted.

Wellfleet’s oysters, though, are the village’s legacy.  Its name is standard chalkboard fare in restaurants around the globe.

What makes the Wellfleet oyster’s quality so special? It’s the water. The waters that flush through Cape Cod Bay are provided courtesy of the Gulf of Maine. By the time the waters wash over the inner Cape they are relatively warm (by Gulf of Maine standards). The phytoplankton rich Gulf of Maine waters provide the Wellfleet oysters everything they need to grow quite rapidly and produce a plump oyster with a balance of sweetness and brine.  Visitors can judge the flavors themselves at the 12th annual Wellfleet Oyster Festival, Oct. 12-13. 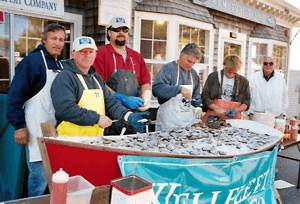 Biologists have documented some 400 species of oysters worldwide. But even within the same species– each oyster carries its provenance like a fingerprint– no two will have the exact same flavor.  That flavor is derived from water temperature, salinity levels, tidal patterns, mating cycles, the plankton they eat, and the mineral content of their habitat. Similar to wine vintages, oysters exhibit a discernible terroir— flavor tags such as “crisp,” “buttery,” and “flinty” are common. The delectable bi-valves criss-cross eateries all over the Cape. Stop by Mac’s Shack for the Wellfleet’s world-famous oysters from an expert shucker at its extensive raw bar. Standard clam-shack fare, such as lobster dinners and fried clams, is served.  There is also a sushi bar. The large picnic tables and paper plates make this an indestructible place to bring kids.

In a rambling, gray clapboard house just off U.S. 6 on the main road coming into Wellfleet village, the Wicked Oyster serves up the most innovative fare. Dawn brings the smell of freshly brewed bean-stock coffee from the coffee bar. Daylight streams through the windows of the enclosed porch where locals and newcomers alike savor their morning coffee and a deliciously fresh breakfast or a lunch of comfort food such as clam chowder, oyster stew and Harry’s open-face burgers (with caramelized onions, fresh mozzarella and Worcestershire mayonnaise) along with a house-crafted Bloody Mary from the laid-back bar.

The Inn at Duck Creeke– circa 1815– is set in a former sea captain’s house. The saltworks house and the main house are appointed in an old-fashioned style with antiques. Comfortable and cozy, the rooms have views of the nearby salt marsh or the duck pond. The inn is favored for its two restaurants– Sweet Seasons and the Tavern Room, the latter is popular for its jazz performances.

Another gem is the Wellfleet Harbor Actors’ Theatre that stages top-flight plays year-round at the funky, Harbor Stage and the new Julie Harris Stage out on Route 6. The town also hosts old fashioned public square dancing on the Town Pier. And where else could you find, right next door to the thriving drive-in movie theater, the stunning nature preserve of the Wellfleet Bay Wildlife Sanctuary? 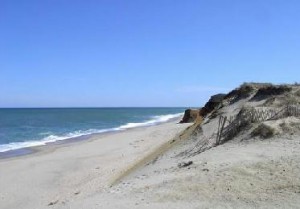 On the east side of the bay, the 1,000 acre Wellfleet Bay Wildlife Sanctuary showcases miles of sandy nature trails for viewing osprey and blue herons amid sprawling salt marshes. One of Massachusetts Audubon’s largest and most loveliest sanctuaries, the pathways traverse salt marsh, pine woods, freshwater ponds, coastal heathland, grassland, barrier beach, and tidal flats. The pristine tidal flats surrounding Lieutenant Island are home to one of the largest and northernmost populations of diamondback terrapins on the East Coast

Take time to watch the seals and seabirds offshore.  Just be sure to keep an eye on the tide– part of the trail goes underwater at high tide– or you may end up with a longer stay than you planned.