Years ago, a phrase like ”alternative Amsterdam” may have conjured up the expectations of more edgy and non-traditional attractions and entertainment, but excessive publicity about legalized sex and drugs diverts away from its other under appreciated, outstanding, water-centric and cultural interests in a city I can walk from one end to another in less than an hour. The alternative I refer to emphasizes a 400-year anniversary (as of 2013) of the famous canal system and no less than 39 outstanding, unique, and easily accessed museums covering every aspect of history, arts, and technology you probably didn’t know. A plethora of world famous attractions and art objectively include both the bad and the good in their colonial history going way back before English and French influences. 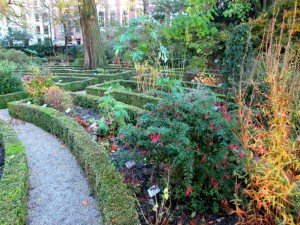 Start with something very different and visit the renown Anne Frank House which exceeded my expectations from extensive middle school study.  Other famous must-sees include the Amsterdam Museum, Rejlksmuseum, Science Museum, Van Gogh Museum, Zoo, Botanical Garden, Vondel Park, Jewish museum, and Maritime museum. The extensive displays highlighted Rembrandt’s and Van Gogh’s lives from a historical perspective, and for a real treat, visit Rembrandt’s restored house of 1639. Good places to get away from crowds while still in the city are the the Zoo, Vondel Park, and Botanical Garden. The last is not big but is surrealy quiet and secluded for those with a nerdy flair for botanical interests. 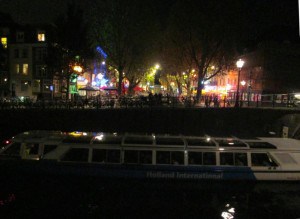 One of the most unique water-oriented attractions are canal houses. Once homes, many are now museums and hotels having the canal district added to the UNESCO World Heritage List. Cyclists and pedestrians will enjoy exploring the unique architecture, alleys, and gardens associated with those neighborhoods. Try to include the Canal House Museum (Grachtenmuseum) and the Museum van Loon. My favorite common element throughout was the strong theme of maritime and water heritage. The more industrial areas of the navigable city waterfront remind visitors Amsterdam grew as a port of call for much of the worlds sea traffic. If pressed for time, prioritize the Rejlksmuseum, Netherlands’ largest and most famous, and Vondel Park, a kind of an Amsterdam Central Park with safe biking and walking. 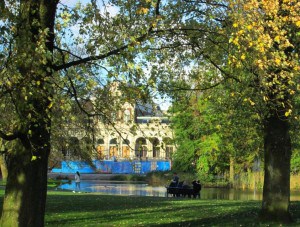 Embracing a progressive and green infrastructure, Amsterdam is easily navigated by foot, bicycle, trolleys, buses, and metros – just hop on. While not geographically vast, the city is productive, diverse, clean, and fun. Everyone speaks English in addition to Dutch and usually another language of their own origin.

I did not observe one rundown or unappealing part of the city, and crime is usually limited to theft and the occasional drunken brawl associated with voetbal (soccer) games. We can learn a lot from the Dutch in how to re-think transportation and public services. A car is simply not necessary and walking most anywhere is easy, but don’t leave home without good shoes, some time, and an umbrella. A huge bargain is to purchase an “I Amsterdam City Card” online or upon arrival at on of the tourist centers (identified by the Dutch acronym VVV). It offers unlimited use on almost all museums, public transportation, a canal cruise, and discounts in many restaurants.

Very much publicized, the primary means to get around the city is indeed bicycle. Amsterdam is flat and its famous and beautiful network of canals radiate throughout the city as wondrous giant blue tarantula legs on maps keeping riders geographically referenced while entertaining. Despite the latitude, the area has shorter and milder winters than other countries up that way due to ocean currents similar to the UK. Cycling is not just recreation but is taken seriously (see sidebar) as basic and affordable transportation attested by more cycles, cycle stands, and dedicated paths in one place ever. I took the taxi one time and remarked to the driver I did not see an overweight person. He joked back saying they are here but you don’t see them because they are in the cars. Riders went everywhere in rain and cold without much protective clothing – they are as hardy as we should be. If I do that here, people think I am weird. 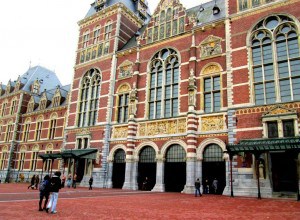 My favorite form of transportation is walking and is the best way to enjoy exploring the canals, unique historic downtown area, the districts, and the various mixed bag of streets and alleys scattered among historic and trendy neighborhoods with their own flair and culture. This might not be practical if I lived there or had to hurry, but walking was easy and fun allowing me to observe and better enjoy the feel of the neighborhoods and people. A good starting point is the city center, well marked by the famous and old downtown train station and plaza, and its tourist information office. The popular canal cruises on the long and narrow boats are actually better saved for exploring the downtown harbor waterfront including the edgy up and coming North (Noord) Amsterdam.

The area seems very much at peace with co-mingling its culture with prostitution and ”coffee houses” (euphemism for pot establishments). For better or worse, this is a huge tourism income source for a lot of the city, contributing to its efficient infrastructure and public services, and so a double edged sword. Something that is not clear to visitors, is that Amsterdam does not support, but rather allows, this which makes a big difference – and by its government regulation and licensing has almost removed all organized crime and trafficking influences.

Dining and entertainment opportunities may surprise the first time visitor as ethnic eateries seem more popular than the local cuisine of fish, meat, and potatoes. A product of its colonial histories and alliances, there are probably more Asian eateries than in most American cities. Common snack and on-the-go foods include their local version of french fries where mayo is substituted for ketchup and their pancake which is more like a thick crepe, and are popular for breakfast, or anytime actually. I like the fruit preserve filling, but meat versions are also popular, and a good alternative to the smoked cold cuts and herring if that is not your thing. 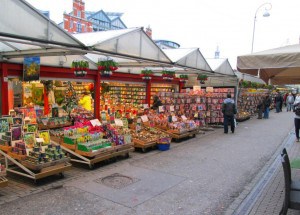 The famous Tulip Bulb Vendors. Will they grow?

For entertainment, there are many lively and unique music and night spots (open late) with Irish music bars being surprisingly popular. Street vendors are concentrated in a few but famous flea market type of areas and feature antiques, souvenirs, clothes, and tulip bulbs. Amsterdam is an easy city to feel at home in, and I know I succeeded when near the end of my stay, I was stopped on my way to the Zoo by foreign visitors who asked directions as if I appeared to live there. Here is the best part – I knew the answer.

Cycling in the city does have some caveats not readily evident prior to arrival and is serious business. Use caution for leisurely stop-and-go sightseeing or checking maps, and be alert to traffic. The goal is to go with the constant and uninterrupted flow of cycling traffic, and focus on safe merging with pedestrians and autos. I fortunately knew this but a first-time recreational cycler from here might be eaten alive. No one uses an expensive overly-priced alloy multi-gear cycle as they are meant to be worn and beat up, and there is also some theft.

I observed numerous cyclists who speed through against the red and have near misses with pedestrians that have the green crosswalk as well as autos that have the green, without slowing. Many cyclists drive with one hand while talking on a cell phone, smoking a cigarette, holding an umbrella, or even holding a small child in the other – but it is what it is. I am not making a judgement or implying this is unique to this location, but rather pragmatically preparing the visitor for safety.

However, don’t be discouraged from bicycling, and if done right, renting a bike is popular and fun when using the dedicated bike lanes. Many bicyclers are going to work or running errands and are highly skilled over the years of anticipating where cars, pedestrians, and other bikers will be in any given moment in front of them as second nature. Amsterdam is literally designed for bike riding and is appropriately regulated and protected to encourage just that. 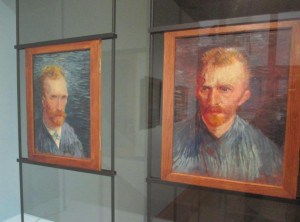 Amsterdam visitor information is so well organized and informative that the US Tourist Office www.holland.com and and the City of Amsterdam Tourism www.iamsterdam.com are more than ample one-stop-shops for all things regarding attractions, activities, transportation, accommodations, the I Amsterdam Card, and specific links to more information by topic.

Amsterdam is not only an easy city to experience, but is also easy to get to. Direct non-stop flights are available from most major cities or add a day or two stop over while flying to the continent.  Once there, popular ways to get to city destinations from the airport are the train and shuttle, and the information booths are super helpful. While the local train is the bargain method for getting into the city, if jet lagged or have a lot to carry, go for the slightly more expensive shuttle that makes the rounds to all the major hotels. No need to stay at one of them to utilize the conveniently placed stops. Avoid the taxi if possible to save money. Taxis are accessed at stands and not available to flag down to assure regulation. 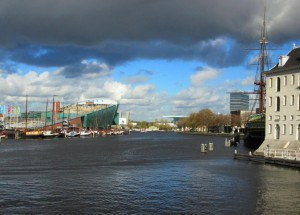 The best deals for accommodations are usually the local independent hotels (including canal houses) and rooms for rent in homes. Popular chain hotels abound but tend to be more expensive. They have a place though if familiarity and utilization of rewards points is desired. The most affordable and fun if you want to socialize and meet others, are the world-famous hostels with a dormitory type of approach. Summer will be the peak season and most crowded, but other times are not assured to be slow either so plan ahead.