Home » Blog » Amsterdam: A Municipal Case of the Munchies

Amsterdam: A Municipal Case of the Munchies Story and Photos by Reed Hellman…
In Amsterdam, snacking and snack foods are an element of gezelligheid, an untranslatable Dutch word for a general and abstract sense of well-being shared with others.  Some people consider gezelligheid the heart of Dutch culture. 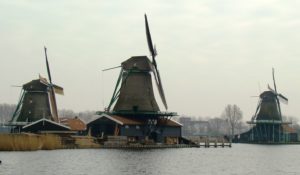 The famous Windmills of Holland found throughout the country.
Maybe their history as an international trading nation brought exotic finger foods to the country’s attention.  Or, perhaps the officially tolerated cannabis has spawned a municipally-sized case of the munchies.  Regardless, Amsterdam is a grazer’s pasture of plenty.  France may have the Cordon Bleu and Spain El Bulli, but Amsterdam has…poffertjes !
No food is better designed for snacking than these silver dollar-sized, puffed-up buckwheat pancakes.  Light, fluffy, dusted with powdered sugar, and wickedly addictive, cooks usually prepare poffertjes fresh for each customer and can top a boxful with molten chocolate, whipped cream, syrup, or strawberries.  Eaten with a small, two-tined plastic fork, each poffertje is a bite or two of deliciously warm, rich, airy pancake, anointed with a ridiculously sweet indulgence.
The Albert Cuyp street market.
As with much of Amsterdam’s street food, vendors at the Albert Cuyp street market ( http://albertcuyp-markt.amsterdam/)    offer poffertjes made to order. 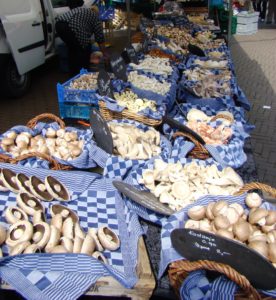 An array of street market treats an Amsterdam specialty.

With more than 300 street merchants selling everything from perfume and clothing to produce and fresh fish, Albert Cuyp is a nosher’s delight, an ideal venue for tasting Dutch snacks.

The Universal Fare
Stroopwafels are two paper-thin, round, baked waffles, about the size of a CD.  A caramel-like syrup made from brown sugar, butter, and cinnamon, pressed in the middle, glues the waffles together.  Find stroopwafels in every supermarket in The Netherlands, but buy them in the Albert Cuyp, freshly made and still warm.
For a savory snack, bitterballen and kroketten are truly universal fare.  Similar in ingredients, preparation, and flavor, the two are different in shape and presentation.  Bitterballen are deep-fried meatballs, usually
a mix of chopped beef or veal and a thick roux of broth, parsley, and spices, typically served
with mustard for dipping. Delicious Kroketten a favorite in Amsterdam
The larger kroketten, sometimes served on a bun, have a distinct oblong sausage shape, but with a diameter similar to the bitterballen.
Bitterballen and kroketten are easily available “from the “wall”.  FEBO, a chain of automat-style hot food “dispensaries” features walls of coin-operated slots, each holding a restaurant-type selection.  Updating such legendary automats as Manhattan’s legendary Horn and Hardart, the hot foods are hot, the prices are reasonable, and the dishes are generally tasty. 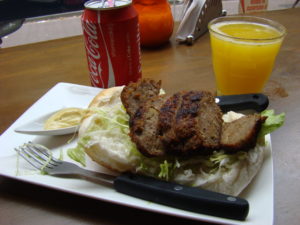 Amsterdam’s Bitterballen sliced and served with bread.
In the Red Light District, off of the Dam, a little kiosk holds a deep fryer and a single
gentleman laboring over a towering mound of sliced potatoes.  The Dutch frieten are double cooked and served in paper cones with the ubiquitous little plastic forks and your choice of an assortment of “sauces”.  Even though ketchup costs extra, the frieten rank among the world’s premier fries.  Try them with the satay sauce.
Sitting at the Rice Table In Amsterdam the famous Rice Table for two.
Satay is just one Eastern food that regularly appears in Amsterdam’s cuisine.  One of the city’s best restaurants, Puri Mas, serves Indonesian rijstaffel or “rice table”, a generous assortment of sweet and savory dishes presented “family style”, around a bowl of rice.  Rijstaffel is not just a meal; it is a gastronomic experience.
Stubbe’s Haring
For full force immersion in gezelligheid, stop at Stubbe’s Haring located on the bridge over the Singel Canal near Amsterdam Centraal station.  This venerable street stand serves herring–fresh, in a bun, with or without pickles and onions.  To enjoy the complete impact of this traditional Dutch munchie, grab the fish by the tail, tilt your head back, open your mouth, and gulp it down in one big gobble. 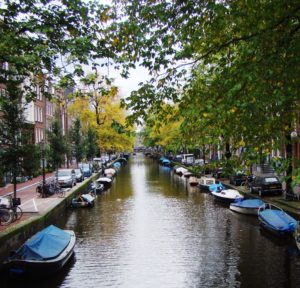 One of Amsterdam’s beautiful Canals.
After that delight, you may crave something sweet.  In the very heart of the Jordaan District, close to the Anne Frank Museum, the Old Dutch Candyshop, or Het Snoepwinkeltje, offers a gateway into Netherland’s history with licorice, sticky treats, caramels, and other unique and traditional sweets.  Dutch licorice is densely ebony, with a salty bite and a distinctive flavor that sets a standard difficult to equal.  Look for Zaans Gedaan licorice made in nearby Zaandam.  The company also offers a series of candy making workshops.
The Albert Hejn supermarket chain.
Undeniably one of the best resources for satisfying the munchies, the Albert Hejn supermarket chain is citywide, offers membership cards, and has enough variety to meet most gastronomic challenges.  In Amsterdam, perhaps the ideal strategy for combatting the munchies would begin at Albert Cuyp and end up at Albert Hejn.