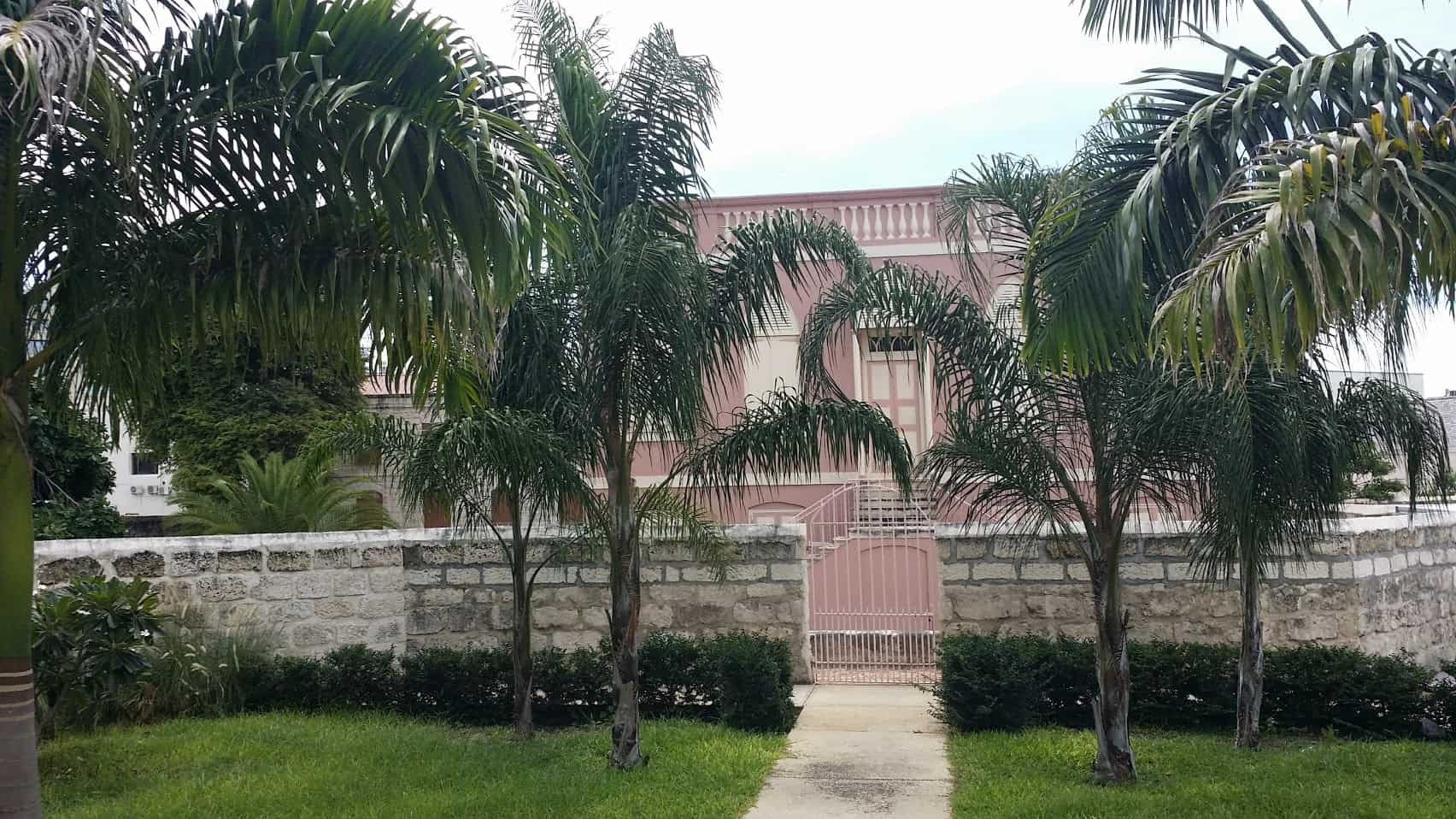 Barbados in the West Indies counts among its national treasures Bridgetown’s Nidhe Israel synagogue (the Scattered of Israel) and yes, pop singer Rihanna. A street named for Barbados-born Rihanna reflects her world-wide fame, but the capital city’s synagogue and museum represent cultural icons of a different sort–a centuries-old Jewish past. 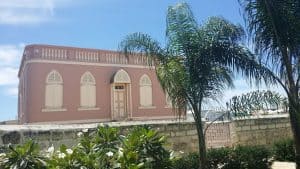 Mention Nidhe Israel to friends, however, and they think of the old synagogue in St. Thomas, U.S. Virgin Islands with its sand floor — a reminder of the Israelites’ exodus. Yet the St. Thomas synagogue is a relative newcomer, founded in 1833, compared to Nidhe Israel dating from 1654, less than three decades after the first Jews first arrived to Barbados in 1628, said Karl Watson PhD, a local historian and archeologist.

Today’s synagogue, its ancient mikveh (the ritual bath for observant Jewish women), the graveyards, and a state-of-the-art museum are the centerpiece in a restoration known as the Barbados Synagogue Historic District.

The trail of the first Sephardim to Barbados led from the Iberian peninsula to Amsterdam and then to a Dutch-controlled Recife in Northeast Brazil, where they honed their sugar-growing skills. When the Portuguese (with its Inquisition) took back the area, the Jewish population fled to Barbados, then an English colony; Europe’s Ashkenazi Jews didn’t arrive until centuries later.

Barbados, 14 miles wide and 21 miles long, gained its independence in 1966 after more than 340 years of British rule. Its Jewish heritage is almost as long. David Raphael de Mercado, an  early settler, is credited with redesigning the sugar mill for improved efficiency, according to Karl Watson who probably knows more about the island’s Jewish history than any one.

Today Barbados’ population is estimated at 280,000 of which 95 percent are of African descent, he said.

Shockingly, those early Jewish immigrants had slaves until the government abolished the system in 1834. From a book, Bygone Barbados, Watson showed me a photo of a former slave, Nancy Daniels, once owned by the Jewish Daniels family, then became their domestic servant and lived to 106. Did slavery conflict with the Jewish ideals of human dignity? I’ll leave that question to the philosophers to ponder. 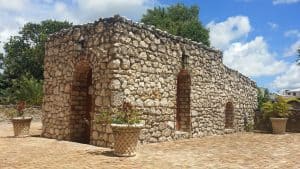 Around the synagogue’s grounds, mold-darkened ancient tombstones crowd three graveyards with inscriptions in Spanish, Portuguese and Hebrew with some going back to the 1700s. To cap a tour of this fascinating site, visit the synagogue museum nearby. 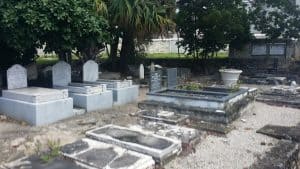 One of three graveyards on the Nidhe synagogue’s grounds.

The synagogue’s turbulent history is well-documented, A 1831 hurricane destroyed its roof; a new structure was built with a copper roof and dedicated in 1834 on “the footprint of the original synagogue,” said Watson. As the Jewish population eventually shrunk, however, the synagogue fell into disuse, then was sold in 1929 and utilized for commercial purposes.

Enter the government, which acquired the structure, and planned to demolish it to construct a Supreme Court building. But the Jewish community reclaimed it in the 1980s, and raised funds for renovation. It’s now Barbados National Trust-protected.

Back to Orthodox Roots.

As architecture goes, Nidhe Israel features simple lines, graceful arches above its windows and pink-colored plaster over limestone walls. It harks back to its Orthodox roots with separate entrances for men and women, Watson explained, but today it’s “more Reform than Orthodox.” Inside are a bima (the pulpit), the ark (which holds Judaism’s sacred writings), a framed Ten Commandments in Hebrew, benches for congregants, and a tray of yarmulkes (skull caps worn by males).

The synagogue is used for special occasions such as bar mitzvahs and weddings, and is open Monday to Friday from nine to 12 and from one to four. Friday night services are held elsewhere, said Scott Oran, the Barbados Jewish Community president during my visit.

During a tour of the Nidre Israel synagogue, caretaker Emerson McCollin was wearing a red baseball cap stitched with the words “I love Jesus.”  Yes, it struck me as odd, but I paid little attention, given the country’s tradition of religious tolerance– Roman Catholic, Methodist,  Anglican churches dot the island, and there is a Hindu temple and a mosque.

In my naivete, I thought any Jewish community could support a permanent resident rabbi. But not here with only 15 families identified as Jewish, Oran told me. 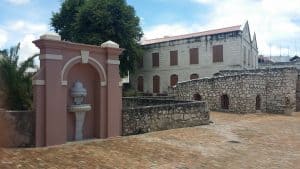 The synagogue’s courtyard and historic wash basin for observant Jews.

In addition to the restored mikveh and the new museum, the synagogue’s courtyard includes a historic wash basin used by observant Jews leaving the graveyards or before entering the synagogue, he explained.

The U.K.’s Tabor Foundation has donated $10 million to restore the historic district within the borders of a city block and its name is honored on a plaque inside the synagogue.

Some 18th Century maps refer to a Jew Street in Bridgetown because of its relatively large Jewish population, Watson said, but it was never a ghetto. Today it’s known as Swan Street and is lined with small shops. Surnames of original settlers included Massiah, which exists even today, plus De Piza,  Valverde, Pinheiro, Lindo, Baruch and Gomez, according to the historian.

The Jewish community compensates for its small size with the prominence of its families and their role in the  Barbados economy. Sir Paul Altman, who’s in his early 70s, is managing director of Altman Real Estate; he was knighted in 2016 by Prince Harry for his contribution to Barbados’ heritage and property development. Sir Paul is considered “the father of the Jewish community,” said Watson and among his other honors, he was past president of the Barbados National Trust. He’s second generation of a family who fled the Holocaust from Poland, said Watson. The Oran family’s business includes mall management and manufacturing doors and windows.

In winter, religious services are held in the main synagogue when the Jewish population swells to estimated 1,500 with vacationing visitors, Oran noted, adding that only 100 Jews are permanent residents. In the past Israeli relief workers on the hurricane-damaged island of Dominica made the half-hour flight to Barbados to attend services for the high holy days.

Oran, U.S.-born, said his family came to Barbados in 1961 for a visit with an aunt and stayed. Today the island’s 15 families also carry the names of Bernstein, Steinbok, and Levy, he told me, but “some Jewish residents aren’t a member of our community or don’t relate to being Jewish”. With such a small population and so few young children, the community could not support a Jewish school.

Being observant takes ingenuity and finding a rabbi is always a challenge, said Oran. For more than 22 years, he has invited outsiders including a Yale professor  (not ordained) to conduct Rosh Hashanah (New Year) and Yom Kippur (the Day of Atonement) services. When Oran found a recruiting site for rabbis, 200 applied. Once the community got a retired London rabbi who led the community from December through February.

The synagogue’s 2,500-square foot museum tells the story of the Jewish emigration to Barbados. It is exquisitely designed and informative with interactive exhibits. A stone floor is embedded with glass cases that display on a layer of sand such items as shards, metal keys, inscriptions on stone marble found while excavating the grounds and cleaning graveyards. 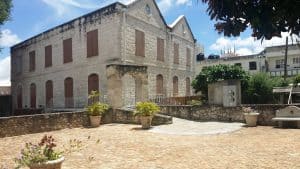 The jewish museum on Barbados.

A short film focuses on Spanish Jewry during the Golden Age, and a wall text discloses that some Jewish men with Christian names were married to black women.

Will the Barbados Jewish community survive one or two generations from now or will the  historic district’s synagogue, the mikveh and museum become the legacy of this fascinating community? Only time will tell.

The Nidhe Israel Museum is located within the UNESCO World Heritage Site – Historic Bridgetown and Its Garrison and is also a part of the Synagogue Historic District which you can explore at synagoguehistoricdistrict.com.