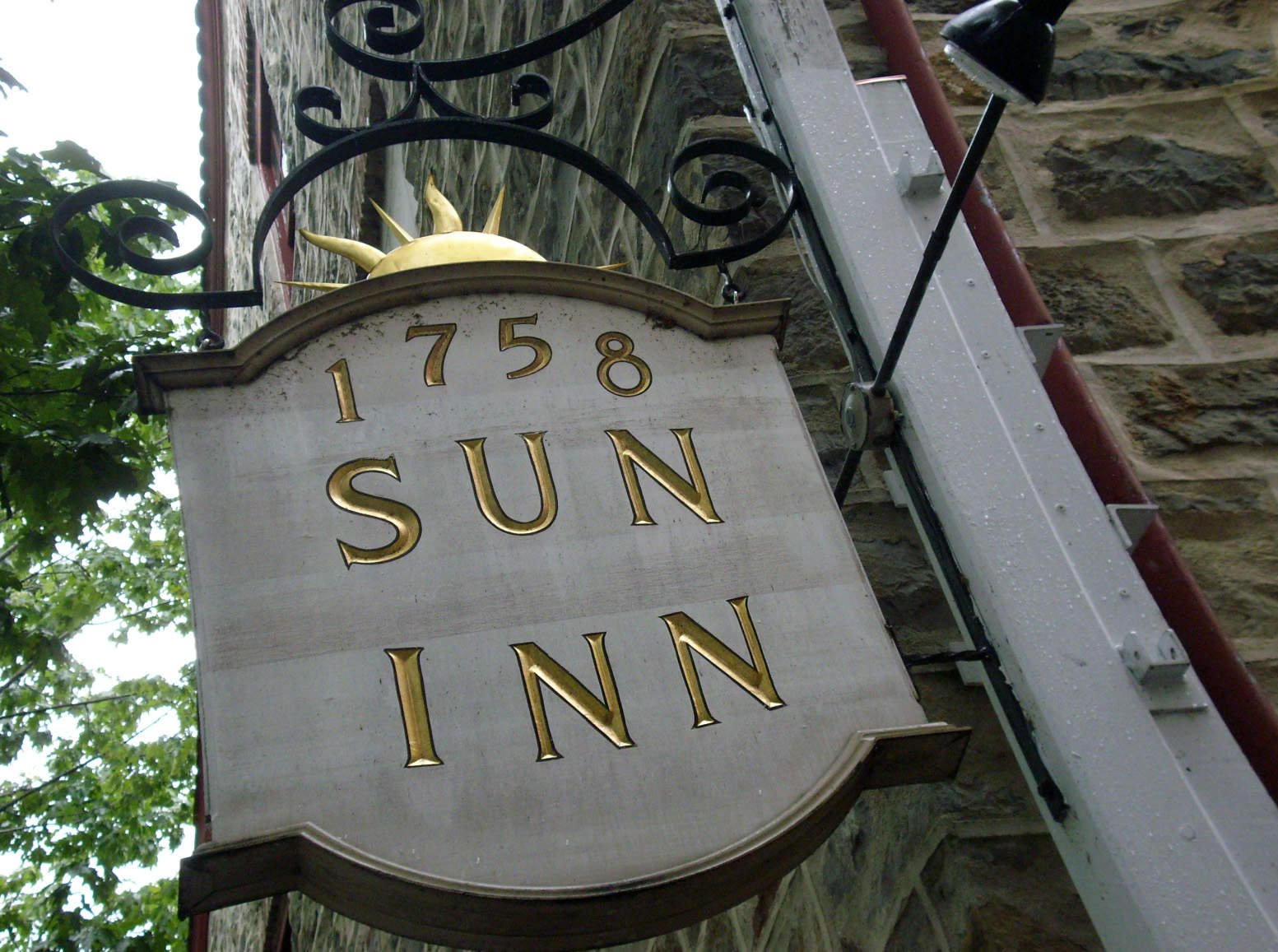 During the American Revolution, no place in Colonial America — with the exception of Philadelphia — played host to a greater number of founding fathers and patriot military leaders than the Sun Inn in Bethlehem, Pennsylvania.

With the British occupying Philadelphia and the defeat of the Continental Army at the Battle of Brandywine, patriot leaders, wounded soldiers, and military commanders found refuge in Bethlehem.

The Sun Inn built in 1758 was known throughout the colonies for its hospitality. It served visitors who came to Bethlehem to transact business with the Moravian community.

Gentlemen — as well as ladies — of the era found unequaled hospitality at the Sun Inn. Built by the Moravian community in 1758 to provide accommodations and service to travelers, the stately stone building with a red tile roof quickly became well-known throughout the colonies for its deluxe suites, clean environment, and superb foods and wines.

It’s likely that few founding fathers were eager to check out of the Sun Inn and return to tending to statesmanship with the British military presence in Philadelphia. Here at the Sun Inn, patriot commanders enjoyed the respite from camp life and the battlefields. 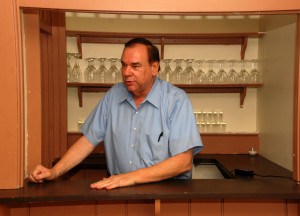 “Bethlehem was also twice the site of the Continental Army Hospital,” noted Richard “Bucky” Szulborski, member of the board and directors and honorary “inn keeper” at the Sun Inn. “The Brethren House at the end of the street was turned into a hospital. All of our generals were here, including a number other people like the Marquis de Lafayette who was here recuperating from the wounds he received at the Battle of Brandywine. 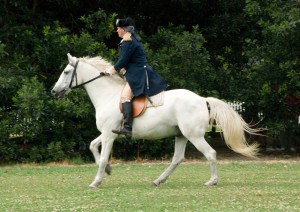 When General Washington stayed at the Sun Inn, he arrived on his horse Nelson, a gift from Virginia Governor Thomas Nelson, Jr. 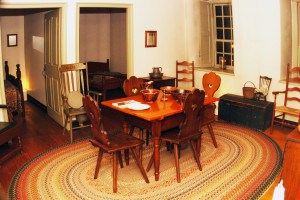 During her visit to bethlehem, Marsha Washington stayed in this spacious suite with a sitting area and two bedrooms. Guests in the suites were assigned a servant to see to their needs.

“They all were here, and they were standing in this room just as you are today,” said Szulborski. “It has been said that outside of Philadelphia there is no other place in the colonies that hosted more founding fathers than the Sun Inn in Bethlehem.”

After 236 years, most patriot generals and founding fathers are believed to have long since “checked out” of the venerable old inn. On the other hand, some believe that a few guests who checked into the Sun Inn ages ago have stubbornly refused to make a permanent exit. 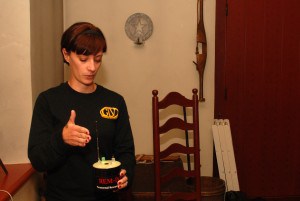 Paranormal investigator Gretchen Gross of Emmaus uses an electronic device called a Rem Pod to check for paranormal activity at the Sun Inn.

“We’re here at the Sun Inn tonight to take everybody through a ghost hunt just to see if there are spirits here within the inn, why they’re here, and if they need help,” said Gretchen Gross, a paranormal analyst with the Greater Lehigh Valley Paranormal Investigation Team. “We’ve also been here for previous investigations and what’s here seems to be very comfortable here,” noted the investigator from nearby Emmaus. “We have actually gotten a lot of EVP’s from here — electronic voice phenomena — that we’ve caught with a digital recorder.”

Whether the spirits — entities — that some believe to linger here have any connection with the American Revolution is currently uncertain, but paranormal investigators have been flocking to the Sun Inn with a matrix of electronic instruments to gather what they regard as intriguing evidence.

“Some nights — as I said — we feel like nothing happens here. This place is quite interesting. Last night it was very, very quiet here,” confided Gross. “Tonight was about 100% better than last night. Last night we had really nothing. There weren’t any personal experiences.”

“Up in the attic, we went into a back corner and did an EVP [electronic voice phenomena] session, and we caught a little girl’s voice,” said Gross. “We couldn’t make out what was being said, but the voice was definitely that of a small child.”

The Sun Inn Preservation Association, the entity that owns and operates the historic site on Main Street in Bethlehem, has encouraged the investigations and has cooperated with many organizations that conduct paranormal inquiries. Economically, it has proven to be phenomenally rewarding for the inn.

The Atlantic Paranormal Society [TAPS] featured on the television show Ghost Hunters has been the most notable team of investigators that has done an inquiry at the Sun Inn.

“They heard about our little ghost in the attic and wanted to do their Christmas show here at the historic inn,” recalled Szulborski. “They called us last September and asked us to put up our Christmas decorations. It was the earliest we have ever put up our decorations,” he said. “They were just fabulous. They found so much stuff here. They kept running out to do their little side bar filming things outside.”

Until Bucky Szulborski met the Ghost Hunters from TAPS, he was a skeptic regarding ghosts and paranormal activity. Recording EVPs and viewing photographs of ghostly images hadn’t convinced him. Szulborski had never felt anything unusual and ghosts seemed to leave him alone — which was fine with him.

“On the Ghost Hunter show they actually caught the little girl on their thermal imager,” said Szulborski. “That made me a believer,” he said with a smile. “It was exciting.”

After closing its doors in the late 1960’s, the Sun Inn was targeted for demolition to make room for a new bank building, local community activist Hughetta Bender decided the historic structure deserved to be preserved. She organized her associates and created the Sun Inn Preservation Association.

By 1975, the organization had purchased the historic landmark with contributions from local residents and grants from the city, state, and federal governments. Through a endowment from the Commonwealth of Pennsylvania, the Sun Inn was returned to its original configuration and appearance in 1982.

Hughetta Bender was instrumental in saving the Sun Inn from destruction. Although Mrs. Bender departed this life in 1995, some believe that she continues to watch over the historic site. When paranormal researchers caught an image — or reflection — of a white-haired woman wearing a white apron on camera, some people who shared Mrs. Bender’s passion for preserving the Sun Inn concluded that the image had to be Hughetta Bender.

“When a group of investigators came in and took a picture of Hughetta Bender, it started this paranormal thing,” offered Szulborski. “She saved the Sun Inn from the wrecking ball, and she’s now back and watches over the place.”

From what paranormal researchers, psychics, and ordinary visitors have experienced at the Sun Inn, Hughetta Bender’s spirit is not alone. It appears that she may have a good deal of other worldly company.

“Something touched me — poked me in the shoulder blade — up in the attic. it was pitch black and I was just sitting there. There was no warning,” said Jill Gleeson, a visitor from State College, Pennsylvania. “It was a very, very deliberate feeling. I screamed and made everyone around me scream,” she said. “I’m still kind of freaked out. It was a really strange experience.” 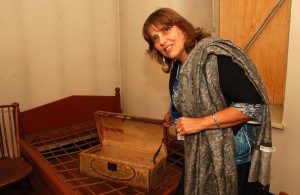 Janet Pollard examines an old chest in a suite of rooms that once served to accomodate Martha Washington. “I think there are things that we coexist with all the time that we don’t necessarily perceive as being there,” Pollard said.

Janet Pollard examines an old chest in a suite of rooms that once served to accomodate Martha Washington. “I think there are things that we coexist with all the time that we don’t necessarily perceive as being there,” Pollard said.

Janet Pollard found her ghost hunting experience at the Sun Inn to be interesting. “I think there are things that we coexist with all the time that we don’t necessarily perceive as being there,” said the visitor from Franklin County. “Sometimes — I think — it gets put a little more front and center. I think there is energy all around us,” she said. “I’m not quite sure that framing it as being a ghost is what it actually is or not, but I definitely think there’s energy.” 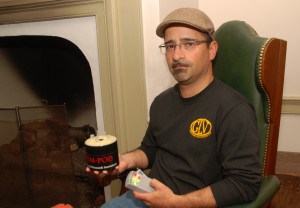 Paranormal investigator Andy Brinker holds a couple of electronic devices — a Rem Pod and K2 meter — that are used to detect paranormal activity. “Most of the evidence that we capture,” said Brinker, ” is through audio.”

Researcher Andy Brinker, also with the Greater Lehigh Valley Paranormal Investigation Team, has used a variety of electronic instruments to measure paranormal activity at the Sun Inn. “All you really need — the basics — a flashlight, a digital camera, and a recorder. That’s how you get started with it. The majority of your equipment is audio based,” said Brinker, a Bethlehem resident. “In photographs, you might get mists or orbs and things like that, but a lot of what you catch as live evidence is through audio,” he noted. “You may get a personal experience through walking and getting touches, but most of the evidence we capture is through audio.”

Among the first to advise Bucky Szulborski that there were ghosts in and around the Sun Inn was Vu Nguyen who resides in Bethlehem. Most of them, he recalled, were clothed in attire that people wore in Colonial times. One evening Nguyen stopped Szulborski while they were walking through the alley next to the inn and told the inn keeper that the place was haunted. Szulborski didn’t believe him — at the time.

“I’ve seen ghosts walking back and forth on Main Street,” said Vu Nguyen. “A few years back, I saw curtains opening and closing on the second floor. I’ve also seen dark shadows walking around it,” he added. “I see it a lot.”

Upcoming  Ghost hunting programs are planned for the general public on October 12, October 20, and October 26, 2012. An overnight event has been scheduled for October 26-27 from 11 PM until 5 am. The overnight session includes breakfast [October 27]. The ghost hunting programs are fund-raisers for the Sun Inn. The fee is $35 for the regular program and $100 for the overnighter. Interested persons are invited to check the Sun Inn’s web site for additional information at www.suninnbethlehem.org