Home » Blog » Blue Mind: This is Your Brain on Water

Blue Mind: This is Your Brain on Water 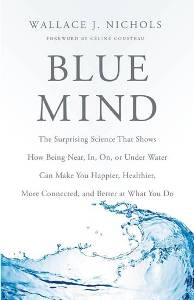 On an early morning in August I’m sitting on the beach in Stone Harbor, New Jersey. As I look up from the pages of my book, there is nothing between me and the horizon but the Atlantic Ocean. The only sound is the rhythm of the waves pounding against the shore while gulls and sandpipers wheel across a cerulean blue sky. Peaceful and calm, my mind is at ease.

That morning I was reading “Blue Mind,” a new book by Wallace J. Nichols about how an ocean can affect our minds, bodies, and overall health and sense of well-being. Through breakthrough neuroscience (explained in layman’s terms) and compelling personal stories, Nichols weaves a captivating tale on the rejuvenating power of water. It makes us healthier and happier, reduces stress and brings us peace.

Several years ago– Nichols, a marine biologist and conservationist– started an annual conference that brought together ocean and brain scientists, biologists, surfers and artists to explore the positive effects of water on our health. He called it “Blue Mind.”  Now Blue Mind is a book, one that has quickly climbed up the New York Times Best Seller List.   The forward to the book is by Celine Cousteau, Jacques’ granddaughter.

Nichols has spent much of his professional life studying sea turtles of the Pacific Ocean and working with fishermen in Baja, California to protect the turtles from poachers. Now he’s exploring the scientific reasons for why humans have such a deep connection with the deep blue. In its simplest terms, blue mind is about the mildly meditative state our brains enter when exposed to water.

“This is what you want if you’re in the midst of a stressful week, you just want to hit that big blue reset button and get out here,” says Nichols, 45, who grew up near the Jersey shore and today lives north of Santa Cruz near the central coast of California. 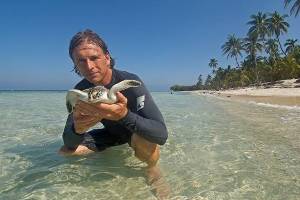 “There are all these cognitive and emotional benefits that we derive every time we spend time by water, in water or under water,” he continues. “Even the actual color blue of the ocean generates a feeling of peace in our mind.”

Water and the Brain

Water, the most omnipresent substance on earth, and with air comprise the primary ingredients for supporting life. Our bodies consist of about 60 percent water and our brains, a whopping 75 percent.

“So when you see water, when you hear water, it triggers a response in your brain that you’re in the right place,” Nichols suggests.

Positive reactions in the brain have been observed in subjects who are simply shown pleasant nature views but it is especially the coastal views that activate the brain’s reward system. Using insights derived from biology, evolutionary geology, medicine and brain science, Blue Mind is an exploration of the deep human attraction to water and how understanding it can lead to a greater insight into personal happiness.

Nichols writes that our brains are hardwired to react positively to water– oceans, bays, lakes, rivers, waterfalls. He combines water science and neuroscience to show exactly that “water provides the most profound shortcut to happiness out there.” 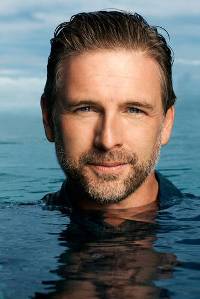 A research associate at the California Academy of Scientists, Nichols’ personal office is a 1954 Airstream trailer parked at a friend’s organic strawberry farm off California Highway 1. In Blue Mind he investigates our emotional ties to water. Explains the technology of brain study. Contemplates what happiness is and how it is evaluated. He looks at the effect of the color blue and why you will pay a premium for waterfront property (and what in your brain is telling you to do it). Nichols goes even further by exploring the recreational use of water and its health benefits, including drug addiction and autism and therapeutic use for wounded war veterans,

Nichols says neuroscientists have studied how everything from chocolate to red wine affects the brain, but they’ve somehow overlooked the single greatest feature on the planet. Experts at his annual conference have explored how being near the ocean can achieve the same stress-relieving effects of meditation and how the ocean ignites our emotional senses.

“This isn’t a novel idea by any means, but our ability to connect the dots on the science is revolutionary,” he explains.

Blue Mind does not come off as a dry science book. While Nichols is comfortable with complex neuroscience concepts, the book is not bogged down with the details of research. I thoroughly enjoyed the personal stories of the surfer, swimmer, sailor, diver, kayaker, paddle boarder, fisherman and those who sometimes risk their lives working on the water. Nichols points out that water therapy is increasingly being used to treat a variety of ailments, including drug addiction, autism and post traumatic stress disorder suffered by veterans.

“I work with a group of veterans who use surfing and kayaking to help with PSTD, and related illnesses,” Nichols says. “It’s not a silver bullet solution for them, rather a nice compliment to traditional therapies,” I talk about a disabled vet in the book who took up paddle boarding. It builds confidence, he’s saying ‘I’m capable and able. He sees himself as athletic, a cool guy. That’s a whole lot different than he used to view himself. They also now realize that healthy water is important to them. Access to the blue mind means access to a waterway that isn’t polluted.” 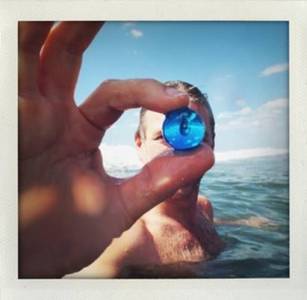 “Some 72 percent of Earth is covered in water,” Nichols says. “From a million or even a billion miles away, it looks like a glistening blue marble.”

Which brings us to his Blue Marble Project. It began on Jacques Cousteau’s 100th birthday in 2010 as a simple way to make his ocean message true and memorable. After a presentation in the New England Aquarium’s IMAX theater, Nichols gave everyone a blue marble to pass along with a positive ocean protection message. The marble represents the earth from one million miles away in the spirit of Carl Sagan, Stuart Brand and the Apollo astronauts. Today, Nichols estimates there are as many as a million blue marbles in circulation in celebration of our beautiful, but fragile, blue planet.

“The audience response was incredible, so I continued sharing blue marbles,” Nichols remembers. “The project has ‘gone viral’ as they say, and now there are a million blue marbles being passed person to person around the globe. It’s a simple reminder of the importance of gratitude, thanking each other for the small and large efforts to restore and protect our biosphere. It feels good to be given a blue marble, and to share it forward.”

Nichols peppers the neuroscience parts of the book with fresh angles and stories. Did you know that actor Michael J. Fox made the career-changing decision to leave the hit show “Spin City”– and go on to launch the Michael J. Fox Foundation for Parkinson’s Research– after a surprise swim with a sea turtle? The book is sprinkled throughout with quotations from novels and poetry, essays and famous speeches, all of which drive home the close bond we have always had with water. Here’s one: “Thousands have lived without love,” W.H. Auden wrote, “not one without water.”

Rich in diverse content, if “Blue Mind” has a simple message it’s what Jacques Yves Cousteau once spoke: “take care of what you love.”

”’Blue Mind: The Surprising Science That Shows How Being Near, In, On, or Under Water Can Make You Happier, Healthier, More Connected, and Better at What You Do” by Wallace J. Nichols (Little, Brown)