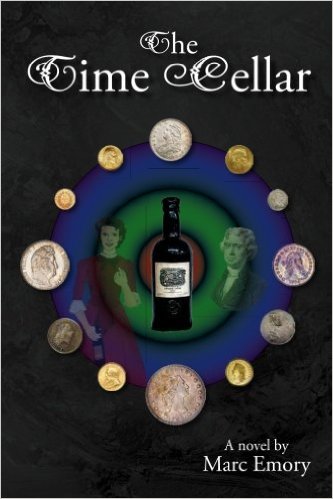 Robert, the main character, works for a law firm not as a lawyer but as a secretary of sorts, booking reservations, travel arrangements, along with being good with numbers. He was a great help to the firm. He had a degree in Physics from UCLA. It was never enough though for his greedy wife Caro. She always wanted a bigger house, better car but absolutely no children.

With his Physics background Robert had set up a lab in his basement trying to develop a Time Machine of sorts. After a freakish thunder and lightening storm he went down to the basement to discover two portals had opened up on opposite walls letting him have access to the past in two different eras.

One connection was to Thomas Jefferson and the other was to the Bordeaux region in France in the 1860’s. These connections provided Robert with an almost unlimited access to wines not only from Bordeaux but also Thomas Jefferson’s cellars. These later years in Jefferson’s life had made him almost penniless and therefore he was more than willing so sell off some of his cellar.

Unfortunately this book drags on and on and on. First about the main character Robert H. Packard’s wife. Then about Anne his love interest who happens to have been “found” while he was developing a Time Machine.

Anne was the daughter of a vineyard worker at Chateau Lafite, her father had access to many bottles of wine from the various vineyards and would pass them through the portal in exchange for ten francs in gold for each bottle. Robert in turn would sell them to a wine dealer for upwards of $45,000 per bottle.

The wine dealer calls in the Mafia to get Robert to hand over the information of where he’s getting the bottles of wine from.

You need to like time travel stories and wine to best appreciate this novel. The best part of the book for me, was at the very end.

Author Marc Emory is the VP of Heritage Auction of Dallas, Texas HA.com , and is also the European Director of Overseas Operations for Heritage Auctions in Germany, France, Holland and Switzerland. He speaks German, Russian, French, Spanish, Italian, Catalan, Swedish and Dutch. Heritage Auction is the third largest auction house in the world. Marc Emory lives in the Germany and has the enviable job of jetting around the globe coordinating consignments of auctions in the United States. Heritage is a major presence worldwide in most areas of collectibles, including the coins and wines mentioned in Emory’s novel.
.