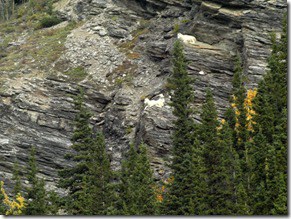 By Bud Cole This is part 7 and the final installment of a multi-part journal describing Bev and my September trip to Alaska. I described an all-day media photography trip into Denali National Park in part 6. We saw moose, Dahl sheep, grizzly bears, caribou and other smaller critters. The mountain views and vistas were spectacular as we wound along the only road in the park. Our destination was Wonder Lake not far from the terminus of the 91 mile dirt road. The weather changed constantly. We finally turned around due to a heavy snow squall about 11 miles short of our destination. Luckily, the snow stopped as we drove to a lower altitude where the photo opportunities resumed. 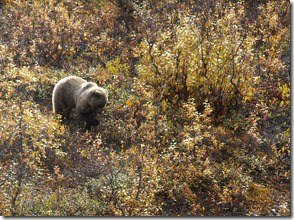 Sunday morning, September 9, was dreary drizzle covered day at our resort area. Our optimism for our scheduled air tour to Mount McKinley was dwindling. To our great surprise, the information from a call to the local airport indicated the area around Mount McKinley, formally called Denali, the native Athabascan name meaning, “High One,” was clear. The 20,320 feet high mountain towers above the other mountain peaks as it looks out over the 600 mile long Alaska Range. The various views of the mountain were spectacular. We flew around and above the summit several times allowing all passengers great photo opportunities. Flying at over 22,000 feet we needed to wear oxygen masks. We shuttled to the Denali Station about 11:00 a.m. on Monday morning, September 10 and boarded the train to Anchorage. The conductor and railroad announcer pointed out that it was the clearest day for viewing Mount McKinley’s summit since the month of May. 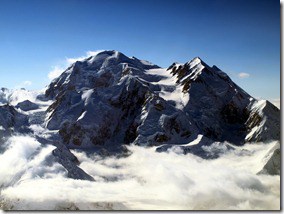 My godson, Gene Zalutsky, picked us at the Anchorage train station. That night Gene treated us to grilled moose burgers, baked potatoes and a tossed salad dinner. It did not take long to fall asleep. A leisurely breakfast and a brisk morning walking tour along the boardwalk of the Anchorage Coastal Wildlife Refuge filled our a.m. hours. After lunch we drove to several other hiking and outdoor areas.

Our final day in Alaska had arrived too quickly. We spent the morning visiting the Anchorage Museum at Rasmuson Center, a world class museum, which seeks to preserve, exhibit and interpret the art and history of Alaska. Unfortunately, we did not allow enough time to do justice to our museum visit. We were scheduled to meet Gene at the heliport at 1:00 to take a helicopter ride to the Knik Glacier located at the northern end of the Chugach Mountains. The glacier lies about 50 miles east of Anchorage. Its ice fields average 25 miles long and 5 miles across. It is one of the largest glaciers in south central Alaska. 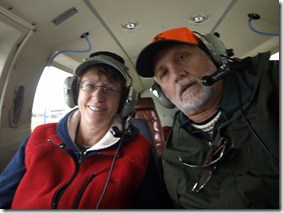 Bud and Bev on board!

Unfortunately, the Anchorage weather was not good for flying. This was our last chance to take advantage of Gene’s prowess piloting the Robinson R44 Raven II Helicopter and our last chance to land on and explore a glacier before heading home later that night.

To our great joy, the weather began clearing in the area where the helicopter was tethered and our afternoon tour was thumbs up! The helicopter was stationed at the meeting point where Gene flew guests to meet up with a dog sled team outfitter during the summer. The sled dog outpost had been disassembled and the equipment had all been flown out about a month before our trip. The snow cover from the previous winter had grown too thin. 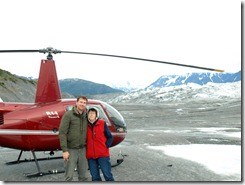 Gene uncovered the Raven II, did a preflight check and soon the helicopter was ready to go. Bev quickly jumped into the front seat next to Gene for the flight out to the glacier. I sat behind Bev. Soon we were flying above forests, snow fields and large pieces of ice floating in the Knik River below us. We saw five moose and three black bears on the forested hillsides and along the eroded shorelines. 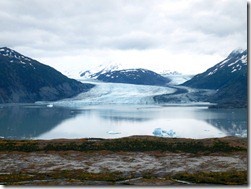 Shortly after spotting the third bear we landed on the Knik Glacier. The winter snows had melted revealing glacial ice pitted with stone and gravel. The fall season’s glacial surface resembled a vast chunk of ice; a large version of what one might chip off the end of a driveway after the cinders had melted into the ice. We hiked about a quarter mile out on the glacier from the helicopter. The surface was very uneven and rough. We could hear flowing water and mini-waterfalls thundering below us. Many areas were covered by dark blue ice. We wore special cleated boots. It was an exciting and certainly a very unique experience. We spent about forty-five minutes exploring the glacier. 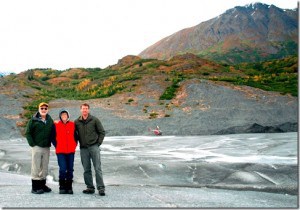 It was my turn to sit up front on the return trip.  Wow, what a remarkable difference between sitting upfront and sitting in the back. The glass windshield reached down to our shins providing a spectacular view of the scenery below. Unfortunately, the flight back to the heliport was only about one fourth of the time of the flight out, but it was still a fantastic ride.

It was about 5:00 p.m. when we landed back at the heliport. We had to be at the Anchorage Airport to check in for our flight home by 7:30 p.m. It was about a half hour trip back to Gene’s office and about 15 minutes more to the Anchorage Airport. We were cutting it close. Once we arrived we had to check our baggage, go through security and get to our departure gate on time. I dropped Bev with the luggage at the curbside check in while I took the borrowed mini-van to the parking lot. Somehow we met near the security check-in area.

When we sent our carry on bags through the security scanner the guards pulled us to the side. We had bought two souvenir laminated Ulu chopping bowls with Ulu knives. The knives’ cutting blades resemble the sharp end of a hatchet. The top of the blade is covered by a rounded wooden handle. I had passed through the scanner first. The security guard politely asked if we might have something not recommended for carry on. I had no idea that Bev had the Ulu bowl and knife sets in her carry on bag. She had forgotten, too. 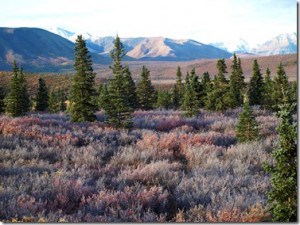 Bev had to take the knives back out to a mailing desk in the main lobby. I stayed with the carry on luggage nervously waiting for Bev’s return. Our flight was scheduled to board at 9:15 and to depart at 9:30. It was 8:40. I anxiously sat watching for Bev to return to the security check. Finally, she returned at 8:55 and as anyone who flies understands, the departure gates are always as far away from security as possible. Luckily, we caught the eye of the driver of a handicapped cart and since I was struggling with the luggage due to my shoulder sling he took us to our gate. The departure gate was not even in the same terminal building. We would have definitely missed our flight. The red eye flight left on time. We changed planes in Minneapolis and we arrived in Philadelphia about 10:40 a.m. including a four hour time change. 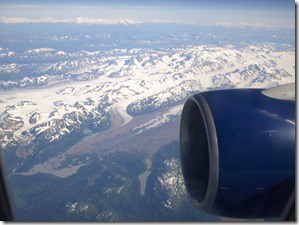 Our friend, Karen Giglio, picked us up at the airport. She usually drops us off and picks us up when we fly from Philly. She lives about 15 minutes away from the airport. After a great lunch at Karen’s house we headed east on the Blue Route and north on the Turnpike Extension and back home to reality.

We very highly recommend a land trip to Alaska!