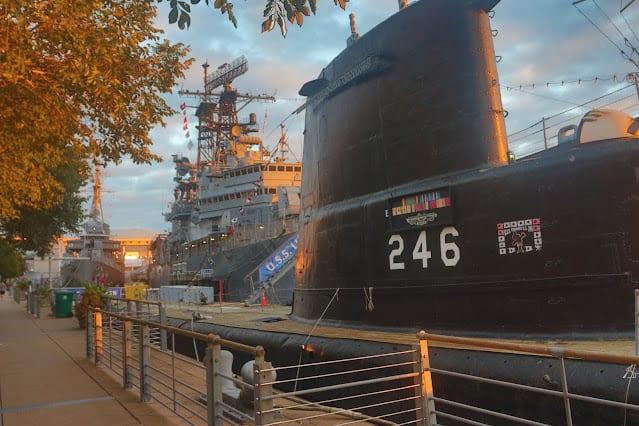 By Dave Zuchowski with photos by Bill Rockwell

Sitting along the eastern end of Lake Erie, Buffalo, N.Y. is in the perfect spot for doing some exciting things along its waterfront. Canalside, for instance, the western terminus of the historically important Erie Canal, has seen a large uptick in several construction projects.

Today Canalside is a popular area for both tourists and locals who drop by for some of the hundreds of events scheduled throughout the year. It is also the home of the Naval and Military Park, a site I visited years ago.

During my latest visit I was shocked to see how much the area has changed. The walk along the string of decommissioned ships in the park has been beautifully landscaped, and I was once more glad to see the USS Little Rock, the battleship the USS The Sullivans and the submarine Croaker still afloat and open for public touring.

Hovering in the distance, the Buffalo Lighthouse is an impressive site, also open to public touring, and I wondered if Canalside might be a good place to watch the sun set over the lake. That evening, I found out it was.

Something new to me is the Buffalo Heritage Carousel which underscores both the extensive history of carousel making in the Buffalo area and its legacy to the use of renewable energy, i.e,. hydroelectric power harnessed from nearby Niagara Falls.

Not just any carousel, this one is solar powered by a Tesla solar roofing system. Completely enclosed in a spacious octagonal pavilion, it features a restored and rare vintage park-style carousel, custom-designed and built in 1924 in nearby N. Tonawanda.

Executive Carmina El-Behairy said 80,000 people have ridden the carousel since its $5.1 million restoration and opening in 2021. Tickets for the 3-minute, 24-second ride are $1 each.

Close by, the Longshed is a replica of a 5,000 square-foot, timber-framed building that occupied the site in the 1820s. Currently, the public can watch craftsmen build a 73-foot packet boat similar to the Seneca Chief, the boat governor DeWitt Clinton took through the Erie Canal when it first opened in 1825. Clinton took the boat all the way to New York City where he poured water from Lake Eire into the Atlantic Ocean, effectively “wedding the waters,“ as he so cleverly put it.

Inside the longshed, not only can visitors walk the ground floor to see the construction process up close and ask the builders questions, they can also look at the interactive displays and read the signage about the canal on the mezzanine.

The building of the boat should be completed in time for the bicentennial of the Erie Canal in 2025. Once complete, the packet boat will be relocated and function as a destination stop for tourists interested in learning about the history and importance of the canal.

In 1817, the first ground for the canal was broken near Rome, N.Y.  For the next eight years, workers would dig the 363-mile waterway from Albany to Buffalo with walls 40-feet wide and four feet deep. To enable boats to ascend the 500-foot elevation along its path, designers included 83 stone locks.

Considered THE definitive construction project of the 19th century, the canal cost $6 million to build and was financed entirely by state funds. This was the equivalent of three-fourths of the entire federal budget at that time.

When asked to help fund the canal, President Thomas Jefferson thought the effort too ambitious. He was proved wrong. In nine years after it opened, canal tolls recovered the entire cost of construction, and New York City went on to become the economic powerhouse in the United States and the world‘s greatest port.

Today, visitors can take canal boat tours as well as dinner cruises and multiple day cruises. For a more hands-on experience, they can explore the waterway by kayak, canoe or stand-up paddle board, and take advantage of over 125 launch sites and several boater-biker-hiker facilities that allow overnight camping at canal parks.

For more information on Buffalo, phone 716-852-0511 or visitbuffaloniagara.com.

For a Place to Stay, Courtyard By Marriott, 125 Main Street, is just steps from Canalside and the Buffalo Metro Line, a convenient way to get to many other Buffalo sites of interest to tourists.

The hotel features sophisticated rooms with soothing natural colors and feature the latest in intuitive features and entertainment including favorite streaming apps on the Smart TV, free Wi-Fi, a mini fridge, microwave and coffeemaker. Phone 716-840-9566 or https://www.marriott.com/en-us/hotels/bufdt-courtyard-buffalo-downtown-canalside/overview.

For a place to dine, Public Espresso at the Hotel Lafayette (321 Washington Street) has an art moderne décor from the 1920s with murals and art work by local artists on the wall. The restaurant roasts its own coffee, and its baked goods are made on site from scratch.

Unassuming but fun and cozy, Ballyhoo at 21 S. Park Ave. Ballyhoo is more than a bar. It serves some of the best in-house sausages and sides around, including its popular in-house made Nancy’s Ice Cream Sandwich.

Served on a bun, the TJ Dawg sausage, for instance, is made with chorizo and bacon with Pico, crema, cotija and avocado. To go with it, try one of the many draft and canned beers on the menu or a craft cocktail or wine. Phone 716-240-9901 or https://www.buffaloballyhoo.com.