Story by Jeff and Stephanie Sylva – 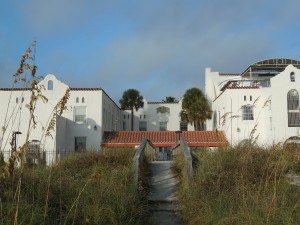 Once known as “The World’s Finest Beach,” Jacksonville Beach on Florida’s northern-most Atlantic coastline basked in the glory of the 1920’s excitement, welcoming a host of celebrities, dignitaries, and even a fair share of gangster-types. At the center of this “playground for the rich and famous,” was a hotel considered “a classic” even from the day it first opened its doors in June of 1925 – the Casa Marina Hotel and Restaurant.

It was the introduction of the railroad in the early 1900’s that initiated the Florida land boom, 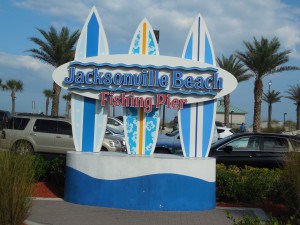 and Jacksonville Beach (known as Pablo Beach prior to 1925) soon became a tourist hot spot known for its boardwalk, dance casinos, beach dining, amusements rides, and wide beaches. And one of the hottest spots on the beach was the grand “salon” of the Spanish-Mediterranean designed Casa Marina, where guests dined and danced (and quite possibly rubbed elbows with the likes of Jean Harlow, Charlie Chaplin, Laurel & Hardy, and maybe even Al Capone) in a romantic setting.

The grand days for the Casa Marina were interrupted by the war years of WWII when the hotel was appropriated for military housing, followed by a period of restoration into private residences, and finally by the closing of this “grand lady.” But this special resort wasn’t going to simply follow many of the other beach resorts of the area into oblivion; and, following a major overhaul, the Casa Marina opened in 1991.

Today the hotel boasts 23 cozy rooms and suites, most with a calming ocean view. We found our ocean-front suite comfortable and reminiscent of the distinctive elegance of the hotel’s glamorous history. We enjoyed perusing the rich history of the hotel and Jacksonville Beach in the numerous black-and-white photographs that adorn the hotel’s hallways. Especially interesting were the old photos showing hundreds of Model T’s lining the beach and others depicting one of the beach’s most popular attractions – motorcycle racing. 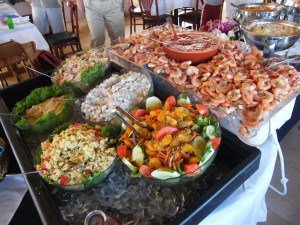 A third-floor penthouse and veranda have been refashioned into the airy, wood-paneled Penthouse Lounge and Martini Bar with outdoor seating offering stunning views of the Atlantic Ocean and the Jacksonville Beach Pier. Executive Chef Aaron Webb, who describes his cuisine as “New Beach” (a mix of local and Southern tastes) has generated a lot of buzz with his lunch and tapas-style dinner menus served in the Penthouse Lounge and al fresco on the rooftop veranda.

But it is Webb’s award-winning, sumptuous Sunday Brunch, served in the hotel’s historic Grand Salon, that attracts crowds of diners eager to feast on his signature dishes of Eggs Benedict on Fried Green Tomatoes with Sweet Chile Hollandaise or his stunning Whole Roasted Snapper seasoned with herbs, rubbed with olive oil, and slow-roasted until crispy on the outside and succulently moist on the inside. Brunch-goers are warmly greeted by the maitre d’hotel, Sterling Joyce, who also serves as the hotel’s historian because of his wealth of knowledge about the beach area, its people, and its treasured landmarks.

The Casa Marina Hotel, a member of the prestigious Historic Hotels of America and listed with 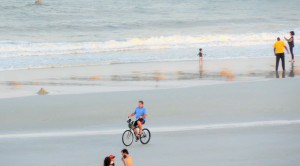 the National Trust for Historic Places, serves as a cornerstone for the resurging spirit of Jacksonville Beach. Jax Beach is experiencing a bit of a rebirth, as a number of hip new restaurants and night spots have appeared. We had the pleasure of eating at Zeta Brewing Company, which offers a great brewpub menu of specialty and flat bread pizzas, ½-pound burgers, great sandwiches (like their Fresh Mahi Sandwich) and brats, and some tempting specialty dishes (like Seafood Bouillabaisse or Shrimp & Grits) – and all perfectly accompanied by fresh, craft brews such as Zeta American Garage, a zesty, refreshing American IPA or their coffee-chocolate porter, Power to the Porter.

A great choice for breakfast or lunch is the Metro Diner, which was featured on Guy Fieri’s “Diners, Drive-ins, and Dives.” Their motto is “Where the Locals Eat,” and they proudly serve “comfort food with flair.” After enjoying Metro’s signature meatloaf plate (priced under $10) and the Pittsburgh steak salad (made with a healthy portion of rib eye steak), we would definitely agree with this description. 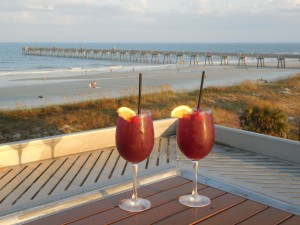 Jacksonville Beach is one of three beach towns that comprise the Beaches of Jacksonville, the others being Atlantic Beach and Neptune Beach. The 22 miles of wide, un-crowded beaches are great for surfing, fishing, kite surfing, paddle boarding, and biking riding. That’s right – the hard-packed sand at low tide is perfect for peddling a beach cruiser.

We rented bikes from Beach Life Rentals, who also rent surf boards, stand-up paddle boards, body boards, kayaks, and beach chairs and umbrellas. Renting is easy; just call 904-584-7368 and they will deliver any of these items right to you. Say you are having lunch at a restaurant in Neptune Beach, and you want to do a bike ride after eating. Beach Life will deliver the bikes to you at the restaurant and come back later and pick them up.

We loved cruising the beach on bikes, riding as far south as Ponte Vedra. We then rode our beach cruisers north and checked out the Beaches Town Center, a trendy but relaxed shopping, dining, and nightlife hub located right where Neptune Beach and Atlantic Beach meet.

During the warmer months Beach Life Rentals has a rental stand on the beach in front of the Casa Marina. The guys at Beach Life go out of their way to accommodate their customers. Although they can’t sell food or drinks, they will provide you with menus of surrounding restaurants. Then they will pick up your food and drinks and deliver them to you on the beach. All this is included in the cost of their rentals.

Some history of the First Coast

To get more insight on the Jacksonville Beaches, we visited the Beaches Museum & History Park. Here we found a wealth of history about Florida’s First Coast beach communities, viewed 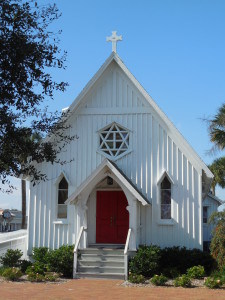 many vintage photographs (much like those in the hallways of the Casa Marina), and examined the History Park’s preserved historic buildings: Jacksonville Beach’s first chapel, the old Mayport Train Depot, the train foreman’s house, the original Pablo Beach Post Office, and a vintage steam locomotive.

Whether you’re looking for a little Old Florida charm like the Casa Marina, some hip restaurants or bars like Zeta Brewing Co. and the Metro Diner, or just lots of fun on the beach, consider the Jacksonville Beaches.