Home » Blog » In Case You’re Ever Navigating on the Lehigh Canal!

In Case You’re Ever Navigating on the Lehigh Canal! 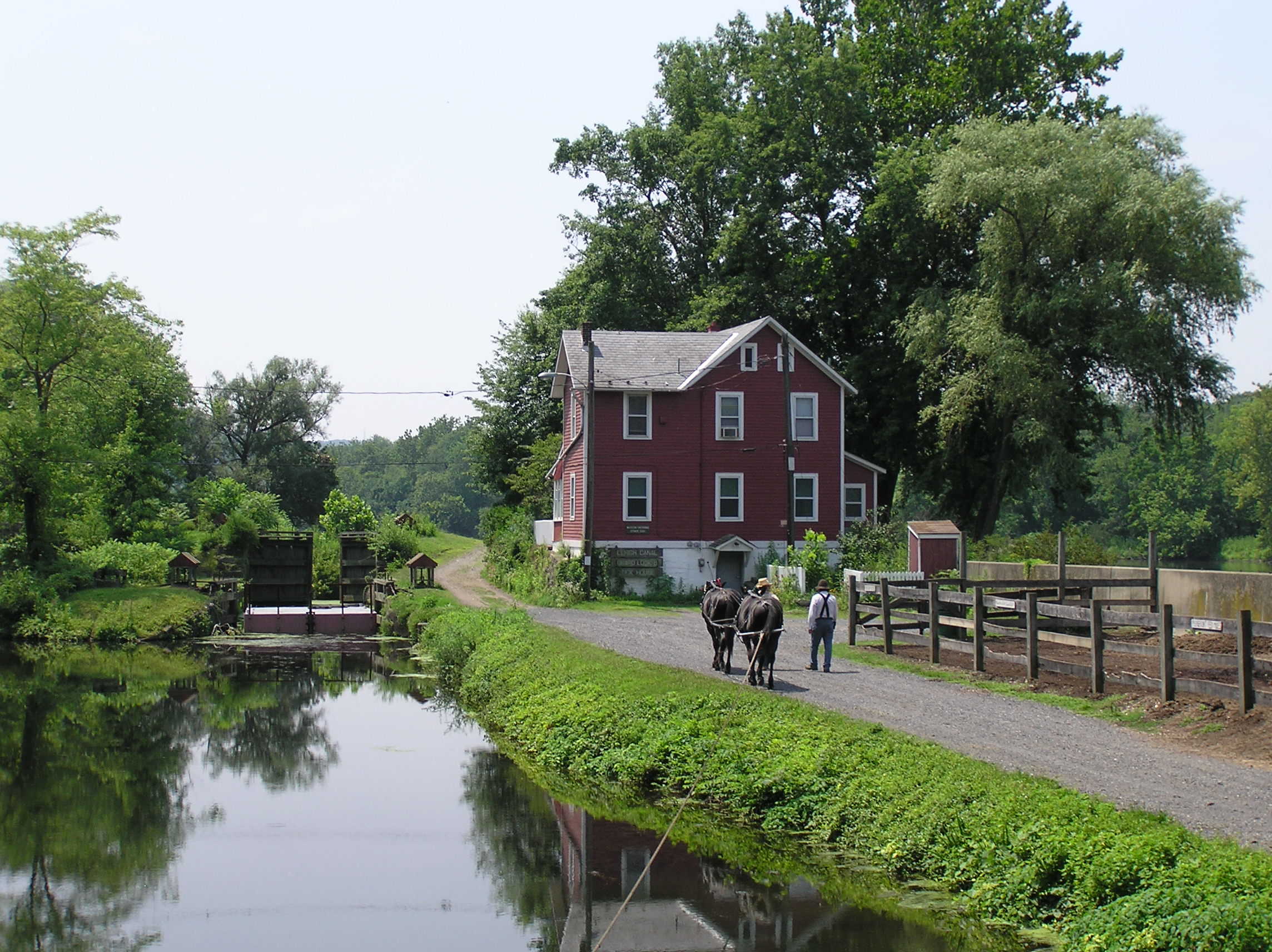 The National Canal Museum located in Easton, Pennsylvania along the Lehigh Canal features the only active mule-drawn canal boat rides in the Keystone State and one of only a few still operating in the entire country. The NCM is also the only museum in the United States specifically devoted to telling the story of America’s towpath canals.

Mule teams were the power ahead, not behind, the canal boats. Hank and George, are used to pull the canal boat Josiah White II along the towpath of section 8 of the Lehigh Canal in Easton’s Hugh Moore Park. Authentically-dressed crew members take visitors back in time as they tell stories about the people who worked and lived along the canal. 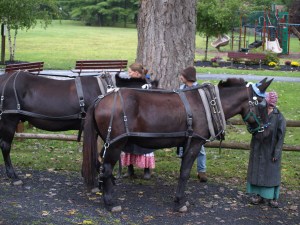 Transporting anthracite coal to markets was the motivating force behind the construction of the Lehigh Canal. Much of the state’s hard anthracite coal was mined in Carbon County where it was hauled by a gravity railroad system to Mauch Chunk (present day Jim Thorpe). Once the canal was built the coal was loaded on canal boats and towed by mule power to Easton. In Easton the canal boats either continued on the Delaware Canal to Bristol, PA or were ferried across the Delaware River to Phillipsburg, New Jersey where they followed the Morris Canal to Jersey City.

Today, visitors can take a 45 minute mule-powered canal boat tour on the Lehigh Canal. Tours are offered during the summer months from June to September. These tours operate Wednesday through Sunday. The first tour departs at noon. Call 610-923-3549 extension 221 for more information. 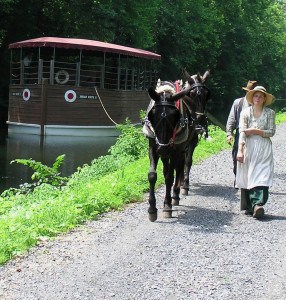 Three historically themed evening dinner canal boat cruises were scheduled in 2014. Each one of the two and one half hour cruises sold out quickly. “Our goal was to have people enjoy history, music and good food all at the same time,” explained Dennis Scholl, Outreach Coordinator for the Delaware and Lehigh National Heritage Corridor.

The first dinner cruise was held on July 26 with the theme; Conversations on the Canal: Life on the Old Lehigh Navigation. Rich Pawling, one of the country’s well-known canal history interpreters and owner of History Alive, entertained the group with his 19th century canal stories and music.

The first dinner menu, designed to fit the era, included shepherd’s pie with ground beef and carrots, a green bean casserole with mushrooms and onions and a vinegar-based cucumber salad. These foods were all readily available along the canal when the canal was a busy transportation route.

My wife, Bev, and I attended the second cruise on August 23. It focused on the waning days of the canal and the Industrial Revolution, which happened to have its roots in the surrounding Lehigh Valley. The August theme was Conversations on the Canal: Big Industry and Big Bands.

We boarded the Josiah White II at 4:50 p.m. An isolated thunderstorm was subsiding as the mule drivers harnessed mules, George and Hank, to the towrope. Before long we were on our way traveling down the canal toward Lock #47 (the only lift lock still working on the Lehigh Canal). We were moving along at the standard canal boat speed of two miles per hour.

Martha Capwell-Fox, the National Canal Museum’s archivist, talked about the general history of the Lehigh Canal and the rise of Lehigh Valley’s industries between 1900 and 1940. She discussed how the industries and transportation changes affected the local canals. Steve Capwell, a local DJ, spun music and discussed its origins during the early to mid-19th century.

About a half hour into the cruise Scholl took over the mic and made the announcement we were all waiting for, “The hors d’ oeuvres are ready. Please head down to the lower deck to be served.”  The menu of hors d’ oeuvres were prepared and served by the Culinary Experience of Hellertown, voted as the Lehigh Valley’s best caterer of 2014 by Lehigh Valley Magazine.

A variety of delicious hors d’ oeuvres filled our cruise menu; hors d’ oeuvres that likely were popular menu offerings during the Roaring 20’s.  Our evening menu included caprese skewers (tomatoes and mozzarella cheese), Waldorf salad with chicken satay, hot dog puffs, crab Imperial, olive tapenade and mushrooms stuffed with sausage. Second helpings were offered to anyone who was still hungry. The catering staff came up to the main deck and completed the menu with a chocolate truffle surprise. 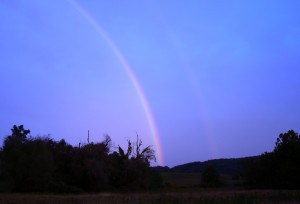 A rainbow arched above the eastern sky as we approached and entered Lock #47. A volunteer lock attendant quickly closed the upper lock doors behind us while another volunteer used a hand crank to slowly open the lower doors. Water from the lock flowed out into the lower canal. Our vessel dropped much like a toy boat moves to a lower level when a bathtub plug is removed. Once we reached the same level as the lower canal the lower doors were closed and the lock filled with water from the upper end of the canal. The Josiah White II moved up and down in the lock in the same way cargo laden canal boats changed levels during the heyday of canal transportation.

The mule tenders turned Hank and George around to begin our journey back up the canal. When the towrope slowly tightened between the boat and the mules we were on our way to the lock tender’s house at guard lock #8. Guard lock #8 is located about an eighth of a mile above the boarding dock and it is inoperable. It is the maximum distance the modern boat cruises can travel up the canal. Capwell-Fox discussed how the guard lock worked and described a typical day in the life of the lock tender’s family while the canal boat captain deftly turned the boat around in the direction of our departure point. We returned to the dock and disembarked at 7:30 p.m. It was a delightful evening and I highly recommend visiting the canal and the National Canal Museum. And be sure to take the canal boat ride. 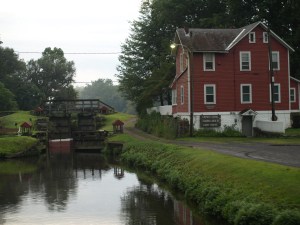 Navigation and transportation of goods on the Lehigh River began about 1790 when rafts called arks were used to float coal, grain and other farm products down the Lehigh River and the Delaware River to major cities like Philadelphia. These arks could only travel downstream and often tore apart when they hit obstacles in the river. The lumber and cargo from the broken arks was sold to area residents wherever and whenever an ark broke apart on the rocky, rapids stricken river.

A better means of transportation was definitely needed when anthracite coal became a popular industrial fuel in the early 1800’s.  Work on the Lehigh Canal began during the summer of 1827.  It was dug by hand using picks, shovels, wheelbarrows and mule pulled scoops. The 60-feet wide at the top, 45 feet wide at the bottom, five-foot deep canal was finished in 1829. . The canal was completed in slightly less than two years for a total cost of $781,303. It’s difficult to believe that a canal covering 46 miles took less than two years of manual labor to complete.

The completed system covered a distance of 46 miles, with 36 miles of canal and 10 miles of slack water navigation where the canal boats floated on areas of the river where dams were built to make the river deep enough for the canal boats to navigate to the next section of canal. The towpath paralleled the entire system with mules pulling the boats through the slack water areas.

There were 48 lift locks and 8 guard locks. All but the four locks near Mauch Chunk were 22 x 100 feet long with the lift varying from six to nine feet. The drop in elevation between Mauch Chunk and Easton is 354.7 feet. There were also nine river dams, four aqueducts and 22 culverts. The very last mule-drawn canal boat in the USA plied along the Lehigh Canal in 1942. It carried coal dust dredged from the Lehigh River north of Treichlers to Walnutport.

Two stone lockhouses are still standing; Walnutport and Freemansburg. Walnutport’s lockhouse has been restored to its original construction plans and operates as canal museum staffed by volunteers. Bev and I are volunteer docents in Walnutport lockhouse. The Freemansburg lockhouse is in the process of being restored. 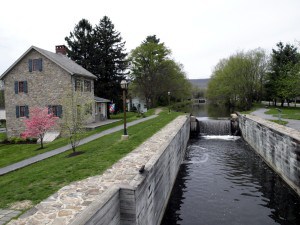 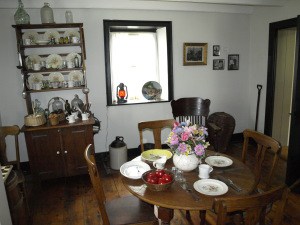