Home » Blog » Castle in the Sky

Castle in the Sky 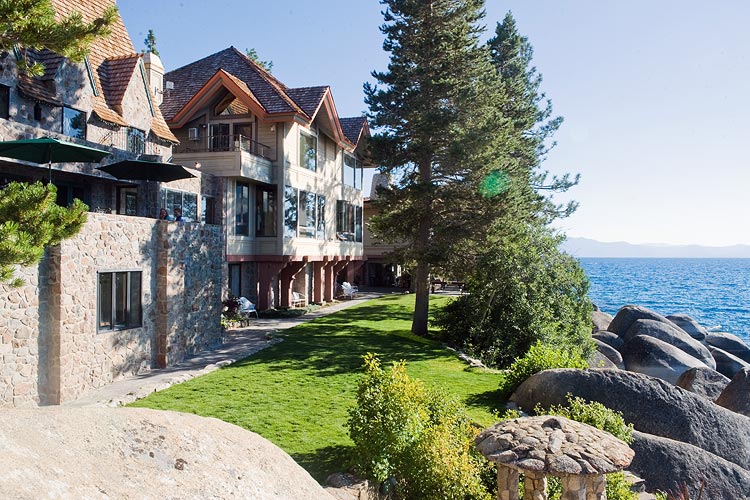 There was a pet lion named Bill.  Mingo, a two-ton Indian elephant, lumbered around the grounds. Both were residents at George Whittell Jr.’s  magnificent Tudor Revival summer estate built between 1936 and 1939.  It is one of the best examples of a great vintage waterfront estate on the eastern shore of Lake Tahoe from the era when prominent San Francisco families built palatial vacation homes. 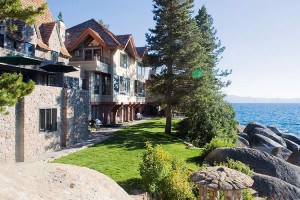 The historic site consists of a main lodge surrounded by three cottages, a card house, a boathouse, an elephant house, a lighthouse, three garages, and a gatehouse all nestled in a high desert pine forest. Camouflaged into the granite and aquamarine shoreline, highlights of the lodge range from fish tanks embedded in the walls to multiple secret passageways.

Simply put, the lodge is outlandish–  elk heads, animal skins, movie projectors, radios, African carvings  and photos everywhere. One that catches your eye is of Whittell kissing Bill. The story goes that the lion seemed happiest when he was tooling around the lake in Whittell’s Murphy convertible roadster.

His immigrant grandparents struck it rich during the California gold rush of the 1850s, not by mining but through shrewd investments in real estate and railroads. Whittell’s father eventually took over the financial empire and expected young George to attain a proper education, marry the right woman and succeed him in the banking business.

George failed miserably on all accounts. Rebelling against high society, as a teenager he ran off and joined the Barnum & Bailey Circus in Europe. When World War I began, he volunteered as an ambulance driver. His parents purchased for him the rank of captain, and for the rest of his life he preferred to be addressed as Capt. Whittell.

Inheriting a fortune in the 1920’s worth the modern day equivalent of $49 billion, the highly eccentric  Whittell vowed to never work a day in a life. It’s a goal he lustily achieved upon his death at the age of 87 in 1969. 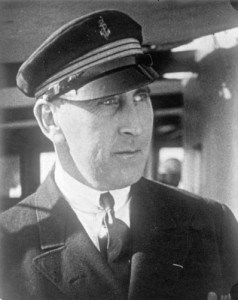 Thunderbird Lodge was his escape from the world.A notorious bon vivant, Whittell acquired elegant automobiles and fast boats, hosted wild parties and squired casino showgirls around the lake in his speedy, 55-foot mahogany yacht, Thunderbird. At one point Whittell owned over 100,000 acres on the Nevada side of Tahoe that included 27 miles of shoreline. After the 1929 stock market crash the Carson & Tahoe Lumber and Fluming Company and other landholders needed cash. Whittell scooped up much of the land, paying six cents an acre.

Last summer my wife and I received a fascinating tour of his summer lakeside estate. Located near Incline Village, it’s a 20 minute drive north from downtown Lake Tahoe  to the lodge. Whittell might have been the richest American nobody has ever heard of.

“He never became famous,” said Susan Grove of the estate’s  preservation foundation society and our tour guide, “because he never really did anything.

“But he was a fantastic land steward. That’s why, today, the east side of Lake Tahoe is so lightly developed. George Whittell owned it all.”

Thunderbird Lodge sits in isolation on a section of the lake that is rugged and pristine, in contrast to much of the rest of the lake’s shoreline. Most of the eastern, or Nevada, side of Lake Tahoe is undeveloped, while much of the western, or California, side is populated by a patchwork of endless homes and commercial property. 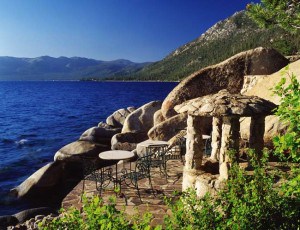 View of Lake Tahoe from the Lodge

At the height of the Great Depression, Whittell commanded a legion of local workers to construct his “Castle in the Sky.”  Somewhat modest in size for a man of his wealth, “the castle,” with its steep-pitched roofs, remains an architectural marvel. Masons from the local Washoe and Paiute tribes did the granite stonework, Norwegians did the woodwork and a Venetian ironworker, Anthony Soletti, created the decorative images of birds, squirrels and deer on the exterior. The design was the work of Frederic J. DeLongchamps, who served as Nevada’s State Architect and was the most prominent architect of his era.

Five small cottages are situated nearby, each a miniature version of the main house.Upstairs, at either end of the house, are two modest bedrooms – one for Whittell and the other for his French-born wife, Elia. She rarely visited, spending much of the year in France, and Whittell openly shared his manor with a succession of mistresses and showgirls. Whittell’s desire for privacy is evidenced by nearly a twisting 600-f00t subterranean tunnel blasted out of solid granite by Cornish miners. Halfway down the tunnel, we paused to peer into “the dungeon” – a cell-like enclosure with bars on the door. 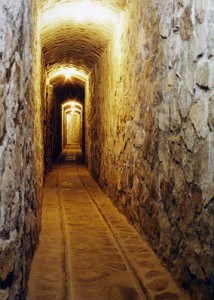 “George told a lot of stories, and many guests who came here left in a highly intoxicated state, so we don’t know which stories we can believe,” Grove said. “But according to one, people who passed out drunk at George’s parties sometimes woke up the next morning in the dungeon, sometimes with Bill the lion licking their face.”

A small, dark room in the tunnel is not on the plans for the house. Samples of the soot from the ceiling revealed this was where opium was smoked. Outside, a walkway crosses a bridge to the “card room,” in a cottage where Whittell hosted high-stakes, all-night poker games with the likes of baseball legend Ty Cobb and, according to drunken legend, Howard Hughes, with showgirls from the Cal-Neva Lodge dancing on the tables. When a discreet exit was required, Whittell could excuse himself, duck into the bathroom and slip out a hidden door in the shower that led into his tunnel.

At the far end of the tunnel is a 100-foot boathouse, the largest on Lake Tahoe, built to house Whittell’s favorite toy, a 55-foot, torpedo-shaped, 70 mph, triple-planked Honduran mahogany speedboat, the Thunderbird. The vessel resembled his personal DC-2 aircraft and his many Duesenbergs automobiles. Delivered to Whittell in 1940, it had twin V-12, 550 hp Kermath engines installed on her. The engines were later replaced with two V-12 Allison aircraft engines, each with 1,100 hp, by casino magnate Bill Harrah, when he purchased the boat from Whittell in 1962. 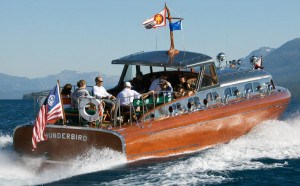 When first built the Thunderbird cost $87,000. That is about $1.4 million in today’s dollars. To charter the boat it costs $5,000 an hour. Jet fuel is available at the Tahoe City Marina.  It gets one-quarter mile per gallon.Today, the regal Thunderbird can be seen in her cavernous boathouse carved out of a solid granite hillside. Chartering Tahoe’s grand dame helps save this iconic vessel for generations to come. Charitable contributions for private cocktail cruises start at $5,000.

Thanks to the Thunderbird Lodge Preservation Society the lakeside estate is open to the public for tours.  While the stone manse and mahogany speedboat are the visible monuments to George Whittell, his real gift remains the wide open spaces we all enjoy on the east shore of Lake Tahoe