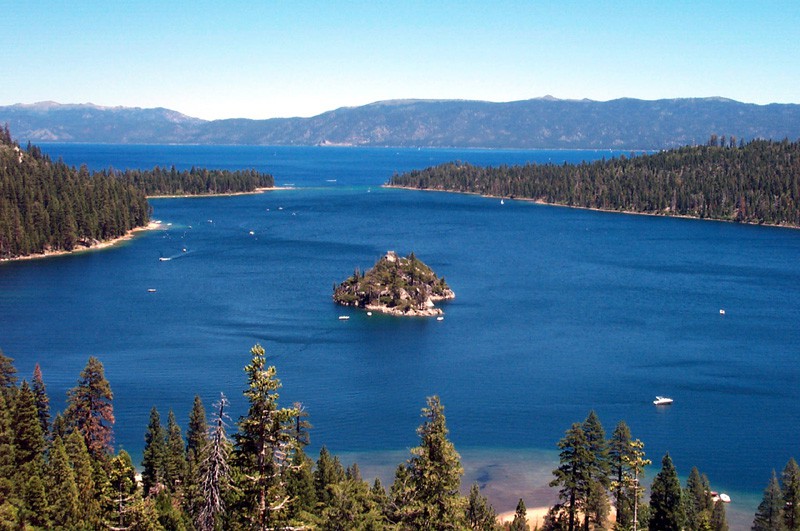 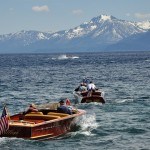 Woodies cruising under the Sierra Nevadas

The beautifully and lovingly preserved antique and classic wooden boats will bring back a flood of memories for those attending the Concours d’Elegance on the shores of north Lake Tahoe, Calif.

The “woodie” speedboats helped usher in a new era of boating on Lake Tahoe in the Roaring Twenties. Wealthy capitalists including Henry J. Kaiser, Leland Stanford Scott and R. Stanley Dollar were piloting speedsters with names such as Baby Skipalong, Short Snorter and Mercury.

In the summer of 1940, real-estate tycoon George Whittell introduced the largest and most elegant of all mahogany hulled woodies to Tahoe, the “Thunderbird.” The eccentric Whittell commissioned the 55-foot Thunderbird specifically for his East Tahoe Shore estate. Built of Honduran mahogany and stainless steel and lavishly appointed, it has its own star power: it’s where Frank Sinatra partied, Tony Bennett met his second wife, and Sammy Davis Jr. frolicked on deck with his kids.

Whittell had twin V-12, 550 hp Kermath engines installed on her. The engines were later replaced with two V-12 Allison aircraft engines, each with 1,100 hp, by casino magnate Bill Harrah when he purchased the boat from Whittell. 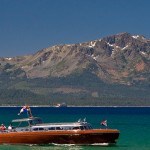 Back in 1972 a group of Tahoe Yacht Club members and friends got together to share their passion for wooden boats. From this modest beginning, the Lake Tahoe Concours d’Elegance has grown to play a major role in the wooden boat community. Hosted by the Yacht Club’s Foundation since 1994, it is both an entertaining and learning experience while helping to preserve the rich history of wooden boating. This summer it will be held on August 9-10 at the Sierra Boat Company in Carnelian Bay.

The Concours d’Elegance is one of the most prestigious wooden boat shows in North America, drawing more than 100 antique and classic boat entries and 5000 spectators. Known for the quality of boats and the highest of judging standards, spectators can mingle with the owners who share their unique experiences. There is music, food, beer and wine to go with the spectacular vintage boats. 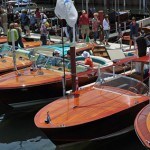 Sporting shimmering mahogany and sparkling chrome the entries include historic lakers and launches, some dating back to 1915,pre and post-WWII racers and runabouts, utility boats and flashy Rivas.

Riva opened its first U.S. showroom in 1964. The runabout caught on with well-to-do West Coast residents who summered at Lake Tahoe.

These “precious mahogany sculptures” became the rage, with powerful V8 engines, leather upholstery and sunbathing space over the engine compartment—as glamorous as an Italian sports car. Tahoe is now home to the largest concentration of Rivas in North America, with names such as Ciao Tahoe, Alcazar II and Mia Basillissa.

“Saga” is one of 100 woodies with a story to tell. Lee Chase spent 11 years restoring the boat, including reworking the Lycoming V-12 engine. There are only two of these engines on the West Coast, and only four in the United States.

“I lost my garage so Lee could have a boathouse,” says Sandy Chase with a bright smile.

It’s a mix of locals, second homeowners and those who love the water who will transport their classic boats to Lake Tahoe for the public to view. Rich Christopher of Morgan Hill is bringing “Clinker Toy.” She is a 1959 22-foot Chris Craft Sea Skiff with a 353 Chevy engine.

“I have had her for eight years and last year was the first year she was in the water,” Christopher relates.”I can’t even count the hours it took to fully restore the boat, including the engine.”

The boat entries are painstakingly restored to the pristine condition they are in today. And all are attempting to win the top honors including People’s Choice and Most Elegant Boat of Show. 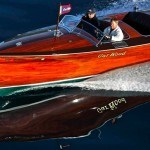 The goal of the Foundation is to maintain the heritage of the classic wooden boats. With proceeds from the Concours, the charitable foundation has awarded more than $250,000 in grants to non-profit organizations in the Tahoe Basin to advance maritime education.

The grand dame of Lake Tahoe celebrates her 73rd birthday at this year’s Concours d’Elegance.