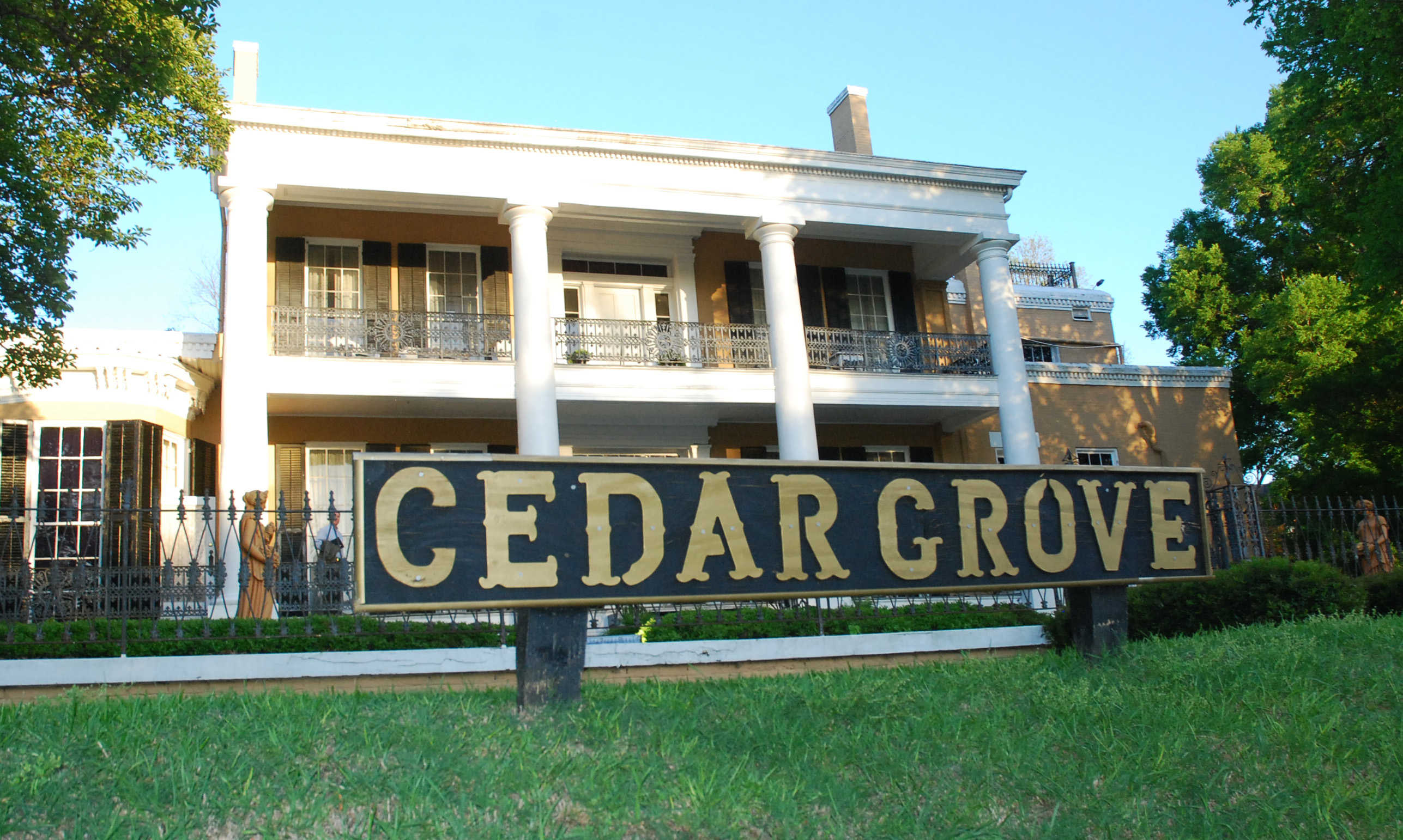 Story and Photos by Bob Ruegsegger-

High above the mighty Mississippi River on a prominent bluff in Vicksburg, Mississippi, John Alexander Klein built Cedar Grove as a wedding gift for his bride Elizabeth Bartley Day. For a century and a half, the stately mansion, its outbuildings, and gardens have provided places of sanctuary and respite for its residents and guests — except during the siege of Vicksburg in 1863.

John Klein, originally from Waterford, Virginia, moved to Vicksburg in 1838 at the age of twenty-four. He began building the Greek Revival manor in 1840. The mansion was completed in 1842.
Following their marriage, the newlyweds toured Europe for a year. While they were traveling in Europe, they purchased many of the furnishings that are still in the house today. The gaseliers, the Bohemian glass above the doors, the Italian marble fireplaces, and elegant Parisian window cornices were among the original embellishments. Many the ancient paintings, huge mirrors, and vintage clocks that still adorn the walls of the house were objects de art personally selected by the Kleins. 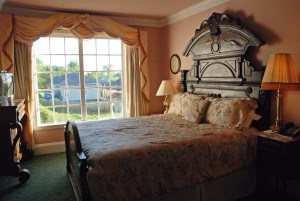 Elizabeth’s Suite is one the Cedar Grove’s thirty-four guest rooms. It is located upstairs in the mansion’s former carriage house.

“On their way home from their honeymoon they stopped off in New Orleans where they commissioned Prudence Mallard to make several pieces of furniture for the home,”  noted Kathy Hall, desk manager at Cedar Grove Mansion Inn. “The best two examples are in the master bedroom which we call the Grant Room. There’s an armoire and a king-size bed.”

During the Civil War years — and after — there was a degree of friction between a lot of the citizens of Vicksburg and Elizabeth Klein because she was originally from Mansfield, Ohio. The fact that General William T. Sherman was her uncle by marriage did nothing to endear her to southerners.
“She eventually won their hearts. That’s why you still see the cannon ball in the hole in the wall,” explained Kathy Hall. “She left that to show Vicksburg that, yes, she was from the North, but her loyalty laid here in the South with her husband.” 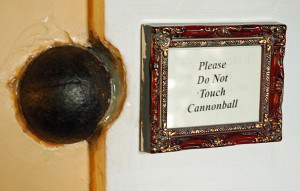 Cannonball Federal gunboats shelled Cedar Grove from the river. The mansion still proudly bears several scars from the 1863 siege. This cannonball — to this day — is still lodged in the door frame of the mansion’s parlor.

The Kleins had ten children, but only six lived to adulthood. Two died of childhood disease. One died of yellow fever, and the other was killed in a hunting accident. The children were buried on the property, and their graves were enclosed within a gated wrought-iron fence. When the estate sold outside the Klein family, the remains of the children were removed to the city cemetery.
For each child that reached adulthood and married, the Kleins built a home on the estate as a wedding present. Two of the homes built for the Klein offspring still exist as independent bed and breakfasts. 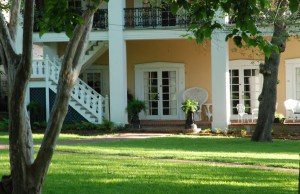 The Corners on Klein Street was built as a wedding gift for the Klein’s eldest daughter Susan and her spouse Isaac Bonham who — at age sixteen — served as a courier for Stonewall Jackson at the Battle of Manassas. Annabelle on Speed Street was the home of their son Madison Conrad Klein. It was constructed in 1868.

At the time of the Siege of Vicksburg, the Mississippi River was within 2500 yards of the Klein property — called Kleinston Landing. Cedar Grove was struck by assorted ordinance — according to history — approximately 41 times.

“One of the cannonballs came through the front door. It grazed the door frame and landed in the wall,” Hall noted. “There’s another hole in parlor area where a cannonball came through the window and went into the flooring underneath,” she added. “That hole is just shows you the thickness of the joist that it went through.”

When Phyllis Small, her husband, and daughter [Colleen] came to Vicksburg to purchase Cedar Grove, they were completely oblivious — unaware — of a few interesting coincidences that they would soon discover existed between the Kleins and the Smalls.

“Colleen asked us to come up here from Natchez to see Cedar Grove. We just fell in love with it,” smiled Phyllis Small. “I think it is actually magical especially in the evening with the lights on, the music playing, and people talking and the glasses clinking. It has a beautiful feel to it.”

Running the Cedar Grove Mansion Inn seemed to be the ideal career path for daughter Colleen who ran the bed and breakfast for five years. Colleen Small’s career path changed — she decided to marry. “She found a wonderful man and got married. She has two lovely daughters,” explained Phyllis Small. “Her career path had changed [laugh] so Momma came up here to run Cedar Grove,” she said. “That was in October 2009.”

While the “management” has changed, the hospitality has not. Caring for the visitors at Cedar Grove customers has remained the primary mission. Phyllis Small wants her guests to enjoy Cedar Grove as she enjoyed it on her very first visit. “When I walked on the property, I just fell in love with it. It’s just one of those things — it’s beautiful,” confided Small. “People who come to enjoy our restaurant and bar are able to step back in time. They do what we did when we first came up here — sit on the porches with the fans stirring the air, drinking wine and kind of relaxing,” she recalled. 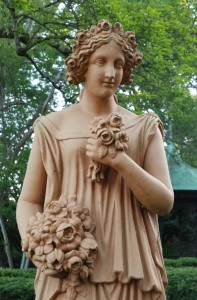 Statue Classic statues flank the front entrance to the mansion.

With thirty-four rooms, Cedar Grove is much larger than most bed and breakfasts. The owners consider the mansion and its environs to be an inn but call it a bed and breakfast. “We’re a place where people sleep and come to have breakfast in the morning and take a tour of the house. One of our staff lives downstairs over in the cottages across the street,” noted Smalls. “When you come on this property, everything else seems so far away. All your problems seem to kind of drift away. You’re here in another time — another moment.”

One thing that — sometimes — doesn’t seem so far away from Cedar Grove is the spirit of John Alexander Klein. Odd things seem to happen from time to time. Phyllis Small attributes some of the unexplained occurrences to John Klein’s spirit. “I feel Mr. Klein’s presence here all the time. I do,” offered Small. “Everything is done to keep him happy. We want to make him proud of everything we’re doing here,” she explained. “I like the whole spirit-ghost stuff. I like that side of it. I’ve had feelings. My daughter has heard voices here in the house,” she noted. “She would come in in the morning — early, early, early — and go to open up the door. People would say ‘hello.’ She would go around and nobody was there. We do have a little bit of that here.”

Phyllis Small finds such aberrant things interesting — even if inexplicable. Her staff has received complaints from guests about the lighting in the rooms and the televisions going off. “The lights do dim and the tv’s go off and on — and nobody’s there doing it. Those things just seem to be part of the house.” said Small smiling. “All of that — I’m told — is related to Mr. Klein.”

The Smalls signed the papers on Cedar Grove at about one o’clock in the afternoon. Later that afternoon, Phylllis Small, her husband, and daughter met with previous owners Ted and Estelle Mackey at the mansion. It was Estelle Mackey — Miss Estelle — that pointed out a very interesting coincidence to Phyllis Small. Klein means “small” in German. Phyllis Small’s father was German. Coincidentally, he and John Klein happened to be bankers. Was it simply chance — or fate — that made the Smalls the owners of Cedar Grove?

“At three o’clock in the afternoon, the lights in the main house went out — just totally went out. We lit candles. The restaurant couldn’t open,” recalled Smalls. “Miss Estelle and I were sitting in the bar drinking Coppola Merlot,” she laughed. “I made the comment to her that Mr. Klein was letting us know who was in charge. ‘You switched owners, but I’m still here.’ I think that’s what he was telling me.” 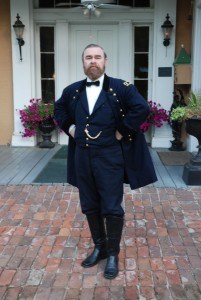 During the Civil War, Cedar Grove was visited by some very prominent men. General Grant was among them. Historic interpreter Larry Clowers as General Grant

As Cedar Grove looks forward to the commemoration of the 150th anniversary of the Siege of Vicksburg in 1863, visitors from across the nation will indubitably experience the elegance of this charming estate on the banks of the Mississippi River.

“I love it. I will stay at Cedar Grove again. I found it to be comfortable and the epitome of southern hospitality. The history was fascinating, and the inn was gorgeous ” offered Sheree Bykofsky, a guest from Atlantic City, New Jersey. “There was a cannon ball embedded in the wall. I was impressed with that. I could also see the trajectory through the door and door frame and the cannon ball lodged in the wall.”

Sheree Bykofsky feels certain that she’ll return to Vicksburg for the sesquicentennial in 2013. “This was a place that changed me. I was a person who was interested in architecture, and I always loved the charm of small cities,” she noted, “but this was the first time I took real active interest war history.”