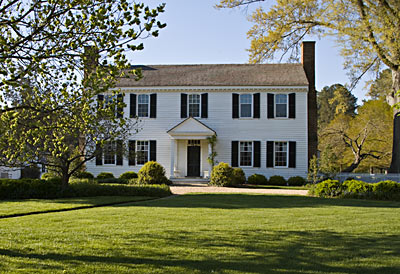 Historic Area visitors will be afforded a special opportunity to visit Bassett Hall as it might have appeared with John D. Rockefeller, Jr. and Abby Aldrich Rockefeller in residence during the Christmas season in the 1940’s.

Bassett Hall is a bit removed from Duke of Gloucester Street where the buildings are decked out for the holidays in Williamsburg-style Colonial Revival decorations featuring fruit laden wreaths enhanced with an array of natural materials.

Christmas decorations characteristic of the mid-twentieth century have been added to the furnishings that belonged to John and Abby Rockefeller to offer visitors a nostalgic look at Christmas in the 1940’s.

“This year we’re going all out. We’re putting wreaths and candles in all the windows, and we’ll be putting up four Christmas trees throughout the house.” said Amanda Keller, CW’s assistant curator of historic interiors and household accessories.

In an effort to encourage visitors to call on the Bassett Hall site during the holidays, Amanda Keller and Cynthya Nothstine, the site manager, have “amped up” the seasonal changes at the former Rockefeller abode. 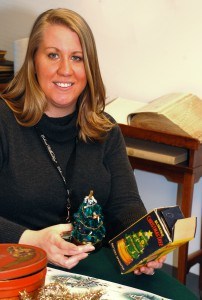 Amanda Keller is CW’s assistant curator of historic interiors and household accessories. Keller teamed up with Cynthya Nothstine, manager of the Bassett Hall site, and other CW staff members and volunteers to decorate Bassett Hall in the style of the 1940’s.

“Christmas is so much about lights and Christmas trees. The lighted Christmas trees show up so beautifully at night,” said Nothstine. “Some folks from one of the local churches will be singing Christmas carols, and then we’re going to have cookies and hot cider in the cottage.”

When John D. Rockefeller, Jr. decided to take on the project of restoring Colonial Williamsburg, he bought Bassett Hall to serve as his Williamsburg residence so that he could continue to come back to oversee the restoration. John and Abby lived at Bassett Hall from 1936 until Abby’s death in 1948.

“The Rockefellers bought the house and lived here. They would come twice a year  in the fall and in the spring. They seemed to know almost everybody in town,” said Keller. “A lot of people don’t realize that they were very much a part of community here in Williamsburg.” 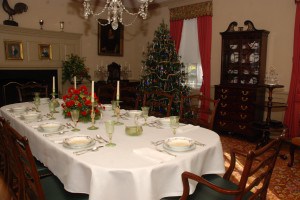 Dining Room The dining room at Bassett Hall has been decked out in Christmas style with a lighted 1940’s style Christmas tree and decorative arrangements by Clark Taggart, floral designer at the Williamsburg Inn.

The Christmas trees at Bassett Hall are decorated with tinsel and lights that evoke the 1940’s. Fireplace mantel decorations also reflect the style of those times.

“Typically in the 40’s, they did a lot with ribbons.  They did mostly very plain wreaths,” said Keller. “Lights, ribbons, garlands, and little touches like the music and the floral arrangements,” she said. “We want to go ‘over the top’ but not so much so that it becomes like Christmas on steroids. We’re trying to avoid that.”

Keller had to locate Christmas lights that would stay cool to the touch because they were going into the historic building and were going to be on all day. All the lights had to be LED and URL listed for safety. 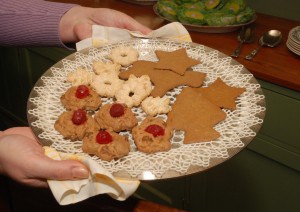 “We had a baking party.  We took 1940’s recipes and made pepparkakor cookies.  It’s a Swedish Christmas cookie recipe. They’re spice ginger cookies,” explained Keller.  “They are real thin though, and they are hard to make. It took us all day.  We used 40’s cookie cutters,” she said. “We also made jewel drop cookies. They have a cherry in the center.”

All the Christmas trees will be artificial.  Fresh trees would very likely introduce pests into the building.  “Objects in the collection have to be kept safe at all times,” said Keller. “Everything has to be faux which makes my life slightly more difficult because everything also has to look realistic.” 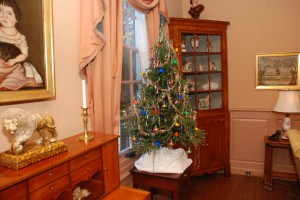 Morning Room This tabletop Christmas was added to the existing decor in the Morning Room. It was Abby Rockefeller’s favorite room at Bassett Hall.. It was here, surrounded by her theorems that she felt the most comfortable.

Throughout Bassett Hall objects that convey the holiday spirit were added to the regularly exhibited furnishings in the house.  In the morning room, a table top tree with tinsel and decorations reflects the season. A vintage Fada radio in a Bakelite case broadcasts Christmas carols and popular tunes of the period.

“We’re going to show the house as if  Abby and John were having guests upstairs. We’ll have suitcases out and packages everywhere,” said Keller. “In Abby’s room, we’re going to put out her dress as if she were here. We’ve never shown the dress. It was made in Paris by Lanvin.” 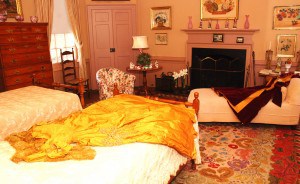 Abby’s Dress & Cape Abby Rockefeller’s dress and cape designed by Lanvin in Paris are among the artifacts that have never previously been exhibited. Curator Keller decided to add the vintage designer clothing to Bassett Hall’s Christmas exhibit.

Bassett Hall was — and is — a reflection of Abby Aldrich Rockefeller and her tastes and interests. It is furnished with all of the things she loved and collected.  Bassett Hall was Abby’s favorite house. It is  very feminine inside. The morning room has pink colors and the master bedroom is also done in pink. Abby’s theorems cover the walls.

“Abby always talked about loving to come to Bassett Hall and that she always felt very at home there,” said Keller.  “She loved to sit and write letters in the dining room all day. She definitely felt very comfortable there.”

While the Rockefellers never really celebrated Christmas at Bassett Hall, Keller and her associates want to bring Christmas to Bassett Hall in a way that’s interesting and helps visitors connect with the Rockefellers whose vision — and generosity — have restored the Historic Area in Williamsburg to its Colonial glory.

If Abby Rockefeller — in spirit — still embraces Bassett Hall, Amanda Keller hopes that the Yuletide programs and Christmas decorations meet with her approval. “We’re decorating in the 40’s style so we’re bringing home what we think they might have done in their own home,” said Keller.  “I think Abby would have loved it.”