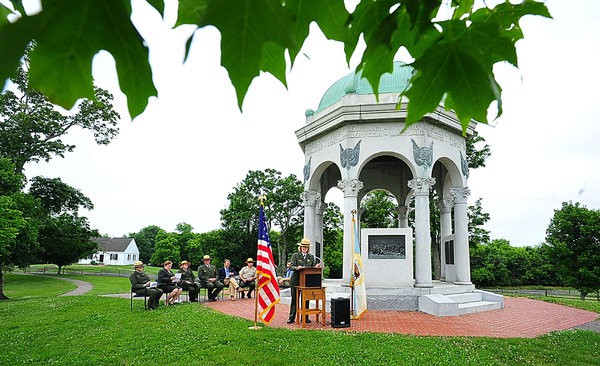 This is a fabulous area to visit anytime but all the special events connected to the Civil War anniversary make it even more enticing through the year.

First Call Weekend, planned for June 16-17, 2012 at the City Park, Hagerstown, Maryland, commemorates the 150th Anniversary of the Maryland Campaign and previews the many Civil War events that are planned throughout the commemorative period in Maryland’s Heart of the Civil War Heritage Area.

During the First Call Weekend, visitors will get a preview of upcoming 2012 Sesquicentennial commemorations and battle anniversary weekends, while enjoying activities such as living history interpretations, artillery demonstrations, hands-on youth activities, Civil War era music and entertainment, exhibits, a Civil War period baseball game, encampment tours, and evening tours by torchlight. The event is free and open to the public Saturday 10 a.m. to 6 p.m. and 8 p.m. to 10 p.m.and Sunday 10 a.m. to 3 p.m. The First Call Weekend in 2012 is the first in a series of three annual expos. First Call Weekend for 2013 will be held in Carroll County with a focus on the Gettysburg Campaign and then Frederick County for 2014 with a focus on the Battle of Monocacy, also known as “The Battle that Saved Washington.”

2012 marks the 150th anniversary of Gen. Robert E. Lee’s 1862 Maryland Campaign, and commemorations explore the impact of Lee’s first advance of the Confederate army into the north, beginning with crossing the Potomac River into Maryland, the Battles of South Mountain and Antietam, and concluding with Abraham Lincoln issuing the Emancipation Proclamation.  Reenactments, living history demonstrations, lectures, concerts, special exhibits, memorial church services and more will take place from June through October 2012, with key battle anniversaries falling in September.

First Call weekend will also be the launch of the new “Civil War Comes to Maryland” Junior Civil War Historian Activity Book which includes fun tasks for school children to complete at thirteen historic sites throughout the Heart of the Civil War Heritage Area. Youngsters will learn about the importance of the Maryland Campaign and what it was like at home when troops moved through the countryside and towns of Carroll, Frederick and Washington Counties. Activities explore various subthemes, including the Underground Railroad, General Lee’s Lost Orders, local encampments, and care of the wounded. Activities will also introduce famous and lesser known historical figures. Participants in this free program may earn a “Maryland Campaign 150th” pin and Junior Civil War Historian Certificate. The book will be available at the First Call event, participating organizations, and downloadable from http://www.heartofthecivilwar.org.

In addition to First Call Weekend, milestone Maryland Campaign commemorative events, activities, and exhibits within Maryland’s Heart of the Civil War Heritage Area include these highlights:

For a listing of Maryland Campaign activities in Maryland’s Heart of the Civil War Heritage Area, visit  www.heartofthecivilwar.org (check frequently as the event listings are updated as information is made available).

Heart of the Civil War Heritage Area – Comprised of portions of Carroll, Frederick, and Washington Counties in Maryland, the Heart of the Civil War Heritage Area (HCWHA) is a certified heritage area in the Maryland Heritage Areas program and is a partner in the Journey Through Hallowed Ground National Heritage Area. It is managed under the auspices of the Tourism Council of Frederick County and guided by a three-county advisory board.  The HCWHA promotes the stewardship of our historic, cultural, and natural Civil War resources, encourages superior visitor experiences, and stimulates tourism, economic prosperity, and educational development, thereby improving the quality of life of our community for the benefit of both residents and visitors. For more information, visit www.heartofthecivilwar.org or call (800) 999-3613.