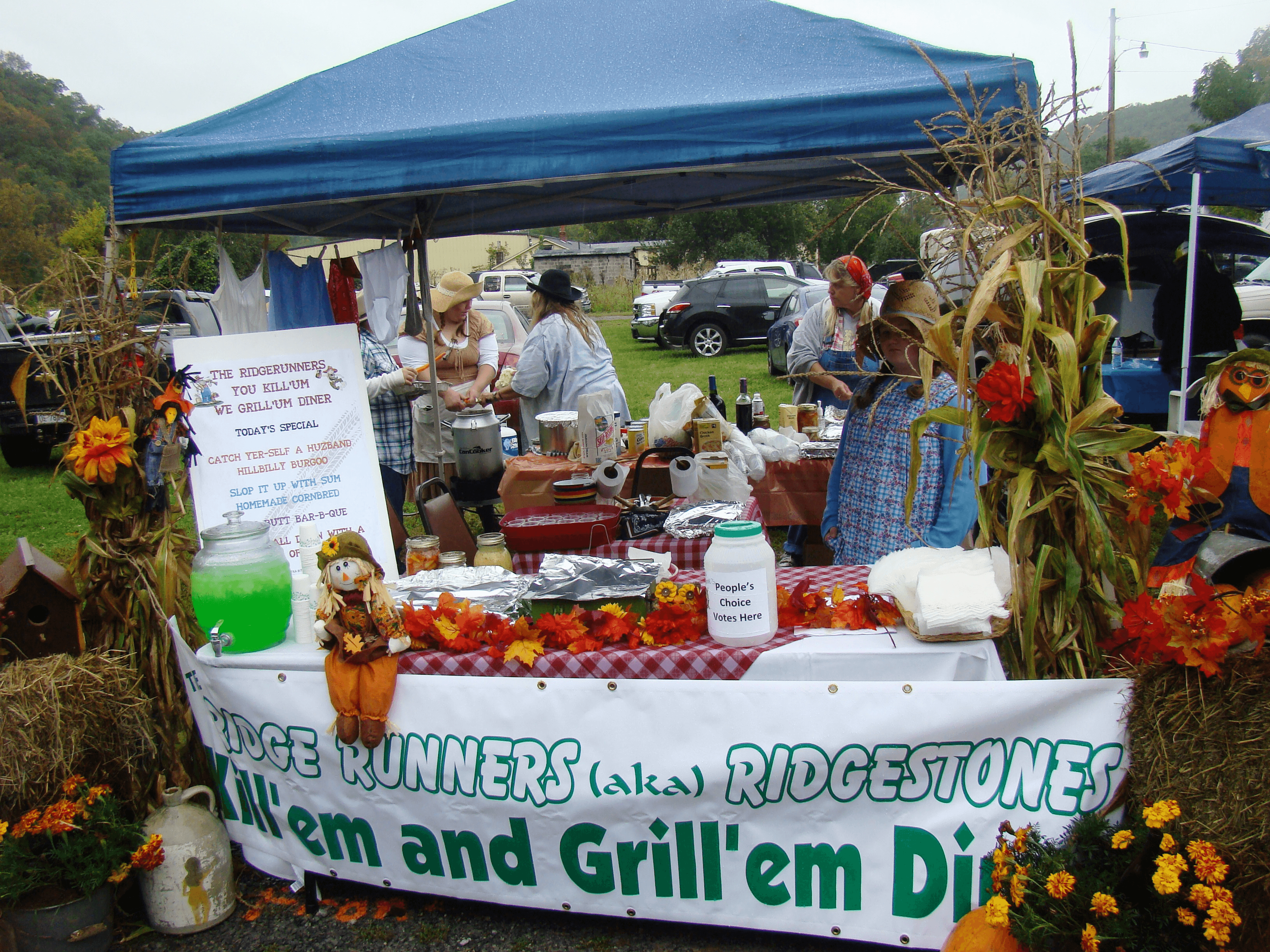 Story and Photos by Reed Hellman-

I was a judge at the West Virginia RoadKill Cook-off. 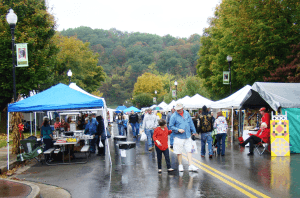 If you are laughing, please realize that those of us who attended are laughing even louder. It was just too much fun! 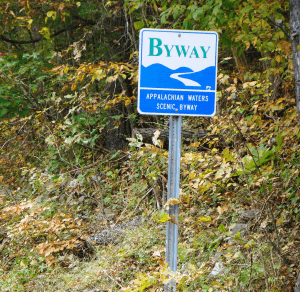 Appalachian Waters Scenic Byway: One of America’s most spectacular roadways.

A highlight of the annual Autumn Harvest Festival in Marlinton, WV, the RoadKill Cook-off mixes culinary skill and creativity with a dash of self-deprecation and a large serving of antic good humor. (Imagine Granny Clampett and Bizarre Foods’ Andrew Zimmern working together in the same kitchen! The Cook-off is a good-natured feature of the Festival’s celebration of Allegheny mountain culture. If you are still skeptical, consider that good weather can find 20-some thousand happy people strolling Main Street’s vendors’ row, listening to regional music, and enjoying the local gastronomy.

Marlinton is about halfway along the 136-mile Appalachian Waters Scenic Byway—Route 39–winding from Lexington, VA, west over the Allegheny Mountains, to Summersville, WV. Encompassed by hundreds of thousands of acres of public wildlands, the Byway climbs into the heart of one of the world’s signature ecosystems. 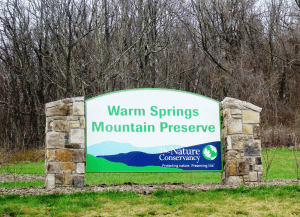 Nature and Conservation go hand and hand in West Virginia.

“This is one of the most globally significant forest biomes in the world,” said Marek Smith, executive director of The Nature Conservancy’s Allegheny Highlands Program that manages 9,000 acres on Warms Springs Mountain. “It’s only rivaled in diversity by similar forests in China.”

In these mountains, a distinctive culture took root, and the Cook-off celebrates that culture. Many festival goers paid $5 each, and queued-up for 2-ounce servings of the eight entries. From kids in carriers to seniors looking for a taste of nostalgia; Carhartt and ball capped locals and overly-outfitted visitors, the crowds explored “Bear Butt Savory Stew”, “Wild Fowl Menagerie”, and “Drunken Deer Chili with Ramped Up Rice”. 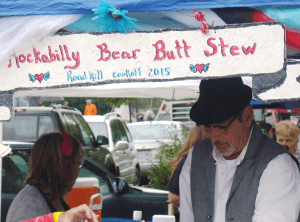 Judging the Best
As one of “a select board of highly-qualified judges”, I rated each team’s entry on taste, originality, presentation, and showmanship. The first place team took away $1,200, second place received $600, third place $300, and the best showmanship received $150. The tasting public chose the recipient of a $150 People’s Choice Award. Stews and chilis led the list of dishes, and venison, bear, and fowl were the meats most frequently used.

Each entrant literally set a table for the judges, with themed place settings, napery, cutlery, beverages, and side dishes. We had maybe 10 minutes to sample a team’s presentation, and despite mentally prepping for “speed dining”, I quickly found myself lingering over the food, enjoying it, savoring the flavors and textures, indulging in the side dishes, and too frequently forgetting to make notes on the judging forms. 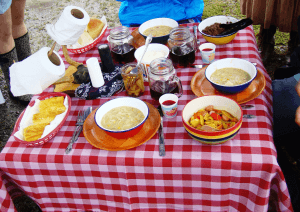 Creativity in menu creations and “napkin” holders too !

Along with the food, humor formed a strong element in many presentations. Togged in over-the-top, stereotypical hillbilly outfits, the first place prize winners, the Ridge Runners, skewered rolls of toilet paper on a set of deer antlers for napkins and prepared a “burgoo”—a wild game stew–designed to attract husbands for their eligible daughters. The burgoo was excellent, but their “pulled” bear barbecue, was the show-stopper for me.

Along with the comedy, the Ridge Runners’ foods were an homage to traditional Appalachian mountain cuisine. “…What we are trying to do is pass down to our children and grandchildren how the woman of Appalachia cooked,” said Rachel Dickenson, one of the team members. “Our mothers and grandmothers passed this down to us…We love to let the public taste the things that we grew up with, and we love that everyone enjoys the foods we cook.” 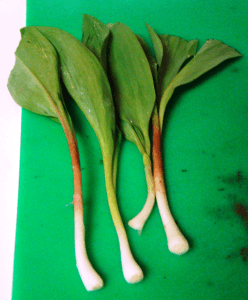 A Tradition, Tonic, and Acquired Taste
A “ramp feed” last spring had been my introduction to that cooking. Throughout the Allegany Mountains, ramps are one of the earliest wild edible greens to push up through the forest’s winter-bare ground. Elongate 6-inch, lance-shaped leaves emerge atop a stem that rises from a bulb growing below the ground. The word ramp comes from “rams,” or “ramson,” an Elizabethan term for wild garlic. The greens range from South Carolina to Canada, and the pungent taste and belligerent odor helped to launch this traditional wildfood into its current gastronomic celebrity.

Traditionally a source of Vitamin C—a much-needed tonic after a winter diet heavy on preserved foods–eating ramps has become the focus of numerous smalltown celebrations. Also keeping with West Virginia mountaineer tradition, these ramp feeds serve as reunions and a chance for neighbors to catch up with each other after a long winter’s isolation. 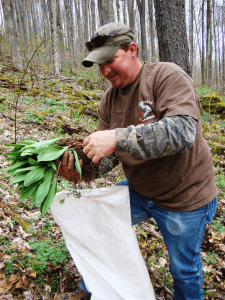 Trampas Hammons selecting the freshest ramps for his and his wife’s recipe’s.

At the Marlinton Motor Inn’s restaurant, Teresa Hammons prepared a traditional ramp dinner for a crowd largely of locals. Earlier in the day, her husband, Trampas, had pulled his pickup off the side of the Forest Service road, deep in West Virginia’s Monongahela Highlands. From the truck’s bed, he picked up an empty grain sack and a pair of short-handled hoes.

“This is my own design ramp digger,” he said, hefting one of the tools. “And there’s the ramps.” He pointed to clumps of lance head-shaped green leaves, growing low, speckling the steep, forested slope. Trampas Hammons and I were hunting ramps for a feed. 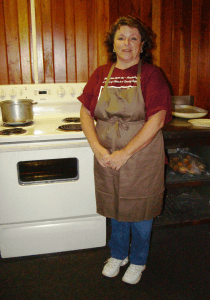 Teresa Hammons ready to go “ramp it up” !

I chopped into the soil just above a clump of ramps. Prying with the handle, I loosened the soil enough to dig my hand in and pull free the ramp’s peanut-sized bulb. In a short while, we had several pounds of ramps filling the grain sack.

Feast and Reunion
Based on recipes handed down through her family, Teresa’s menu included ramps and fried potato wedges; boiled ramps served with vinegar; ramps fried in bacon grease; scrambled eggs with ramps and potatoes; brown beans; and cornmeal biscuits baked with diced ramps. Ham and sausage accompanied the meal, and Teresa presented a new addition that she called “Tramp”—fresh-caught trout cooked with ramps.

Aside from the ramps, the recipes used foods that the mountain people could have preserved through the winter, such as potatoes, bacon, ham, and sausage. The eggs came from family chickens and the trout season had just started.

A quartet of local kids playing traditional mountain music enhanced the mood. As people entered the dining room, they invariably saw familiar faces, resulting in lots of back-slapping, hand-shaking, hugging, and air-kissing. The general conversation seemed to focus on family milestones, recent community occurrences, and how everyone had passed the winter. 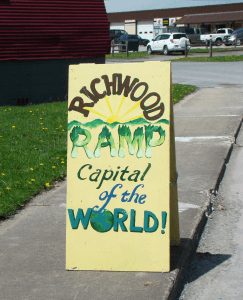 The oldest and largest ramp feed, the Feast of the Ramson in Richwood West Virginia, dishes out nearly a ton of ramps plus traditional fried potato wedges, ham or sausage, cornbread, brown beans, and gallons of fresh-brewed sassafras tea. In the nearby parking lot, it’s easy to spot licenses from eight states and Ontario. Entering Richwood High School, home of the Feast, the earthy, penetrating tang of cooking ramps is a clout to the olfactory.

As much as ramps are steeped in tradition, they have also started appearing on the menu at more upscale venues. At Heston Farm, a “destination restaurant” in Fairmont, West Virginia, ramps receive a different gastronomic treatment. Mickey Heston’s Foxfire Restaurant serves farm-to-table, French country style food. Taking full advantage of the short ramp season, the Foxfire offered a ramp and artichoke salad in a very fresh and clean vinaigrette. The mild artichokes and tang of the vinegar neatly offset the ramps pungency. The chef’s creamy potato-based ramp soup, rich with bacon, could have been a very satisfying meal in itself. 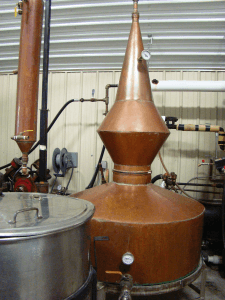 However, Heston’s most notable contribution to ramp culture might be his “ramp shine”, a traditionally made moonshine, flavored with ramps. Heston’s Pinchgut Hollow Distillery uses a classical copper pot still and recipes handed down through generations to create novelty and moonshine-style whiskeys in a wide variety of flavors. The corn whiskey infused with spring ramps has a sweetish flavor and a powerful finish. 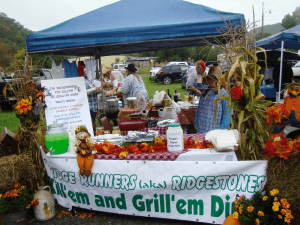 Place the stewing hen, rabbit, and venison and bear loin into 2 gallons of water. Add chicken stock, 2 quarts potatoes, the carrots, onions, tomatoes, wine, salt, pepper, minced garlic, rosemary, and a bay leaf. Bring to a boil and simmer for 2 hours. Remove the chicken and rabbit, let cool, and debone. Remove 3 cups of the broth, add flour to make a thickening. Return thickening to the pot and gently stir. Add the creamed corn, beef stock, and cabbage. Add the rabbit and chicken meat and egg noodles. Cook on low heat for 10 minutes more. Add butter and pepper to taste; garnish with bay leaves. Serve with cornbread or rolls.

Kitchen Guy Allegheny Vichyssoise
1 tablespoons unsalted butter
2 dozen ramps with leaves, cleaned, trimmed, and chopped
1 large baking potato, peeled and thinly sliced
1 1/2 cups chicken stock
1/2 cup half and half
Salt and ground white pepper to taste
Melt the butter in a soup pot over low heat. Add the chopped ramps and cook until tender but not browned. Stir in the potatoes and stock, bring to a boil, reduce the heat, and simmer until the potatoes are soft. Add the half and half. Using a blender or immersion blender, puree the mix to a creamy consistency. You can thin the mix if necessary with chicken stock. Add the salt and white pepper to taste.