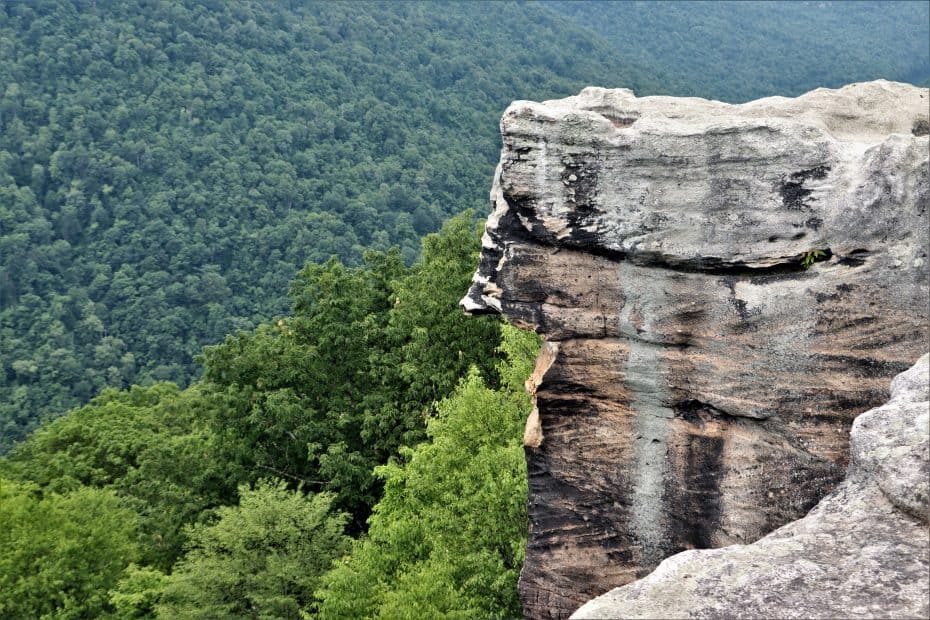 What is it about overlooks that draws people looking for spectacular vistas? Whether it’s Iceland’s Landmannalaugar, South Africa’s Lion’s Head or the Tiger’s Nest in Bhutan, people really get a thrill out of being high up and surrounded by stupendous natural beauty. 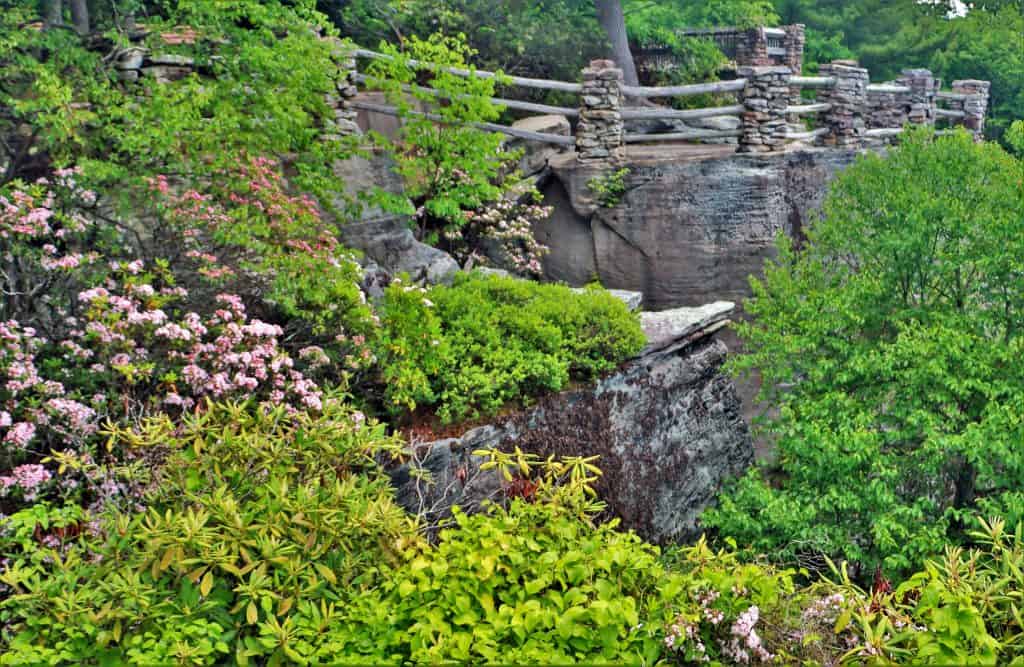 Fortunately, there’s a magical spot much closer to home that should give the hairs on the back of your neck a lift. Located in Monongalia and Preston Counties of West Virginia near the Pennsylvania and Maryland border, Coopers Rock juts out over the Cheat River Valley with the same in-your face majesty as Uluru (Ayres Rock) in the Australian Outback.

I bonded with the massive sandstone outcrop at an early age which became a frequent and favorite family outing. As a boy of seven, I was fascinated by the solid rock hovering precipitously over the steep valley below with only a sturdy wooden railing to keep me from tumbling over. I liked to peer down to the river’s edge, then up the other side of the mountain. The binocular apparatus mounted at the edge of the rock gave me a closer look. Drop a quarter in the slot and enjoy a three-state vista.

Later, we made additional visits to astonish an aunt visiting from Brooklyn as well as even later outings to amaze a younger generation of visiting nephews. At no time, however, did I realize my goal of hiking to the bottom, although I once took the short and easy trail that wraps around the face of the rock. 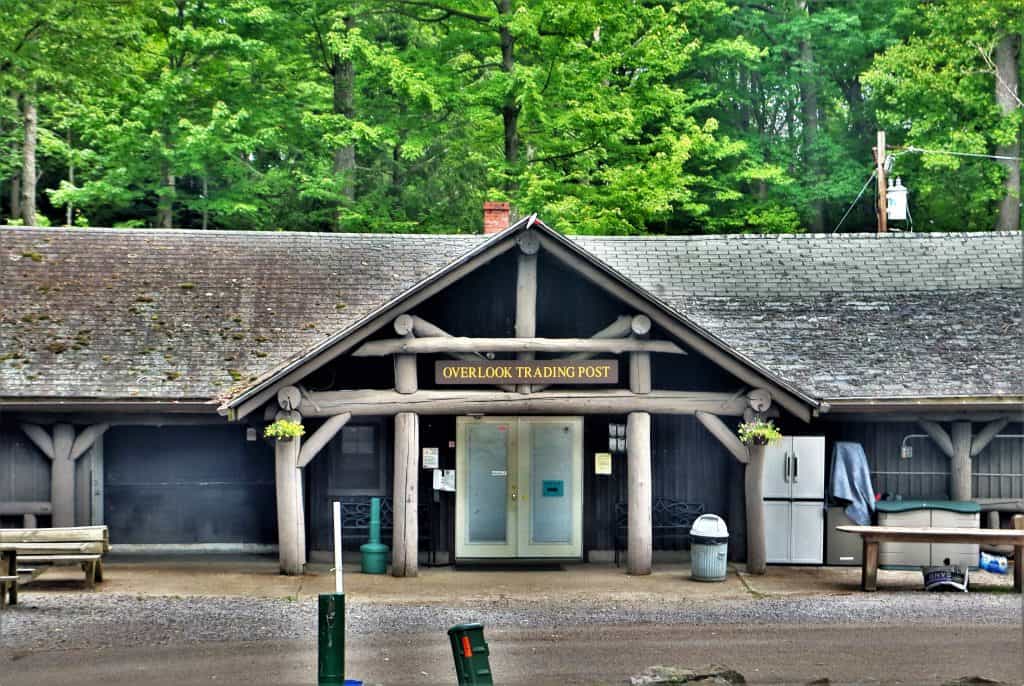 Early in June, I made my latest return vowing to explore what had been for me uncharted territory, namely Raven Rock. Of course, my pilgrimage started at the main overlook, followed by a stop at the nearby Overlook Trading Post to pick up a hiking trail map and some bottled water. A short drive away, I stopped at what I thought was the entrance to Raven Rock Trail, but I ended up at a popular rock-climbing wall instead where I met an instructor from Seneca Rocks geared up and trying to teach a novice the ropes, so to speak. After a quick inquiry, I got directions to my goal, which was a little more than quarter mile down the road. 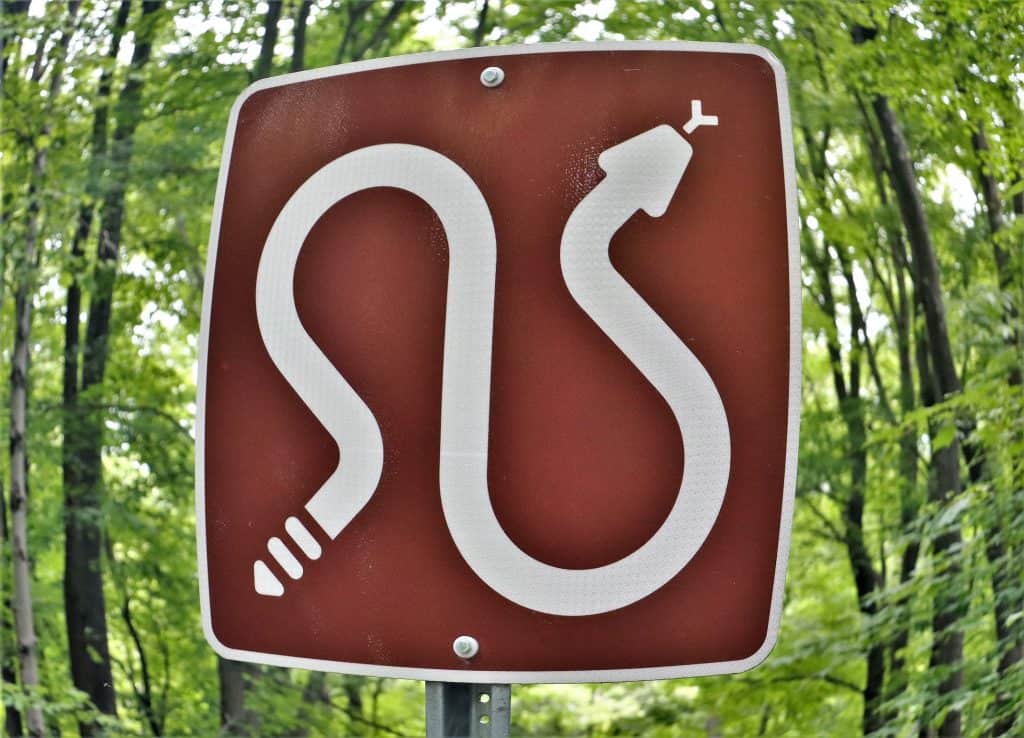 Snake Warning sign along the road.  I had been a little leery about my hike when I saw the unusual rattlesnake warning signs along the road. Thinking ahead I brought along my walking stick intending to pound it on the ground to give any sunning snakes a head’s up. After all, they’re more afraid of you than you are of them.

Decked out in my tennis shoes, I started out with my photographer in tow. The path was largely downhill and rocky with dirt in between. The rocks were small and embedded in the soil and made me wish I’d worn hiking boots instead . I tried to avoid stepping on the stones for fear of turning an ankle, and I looked on in envy as a number of joggers wearing similar tennis shoes went whizzing by without a care in the world. 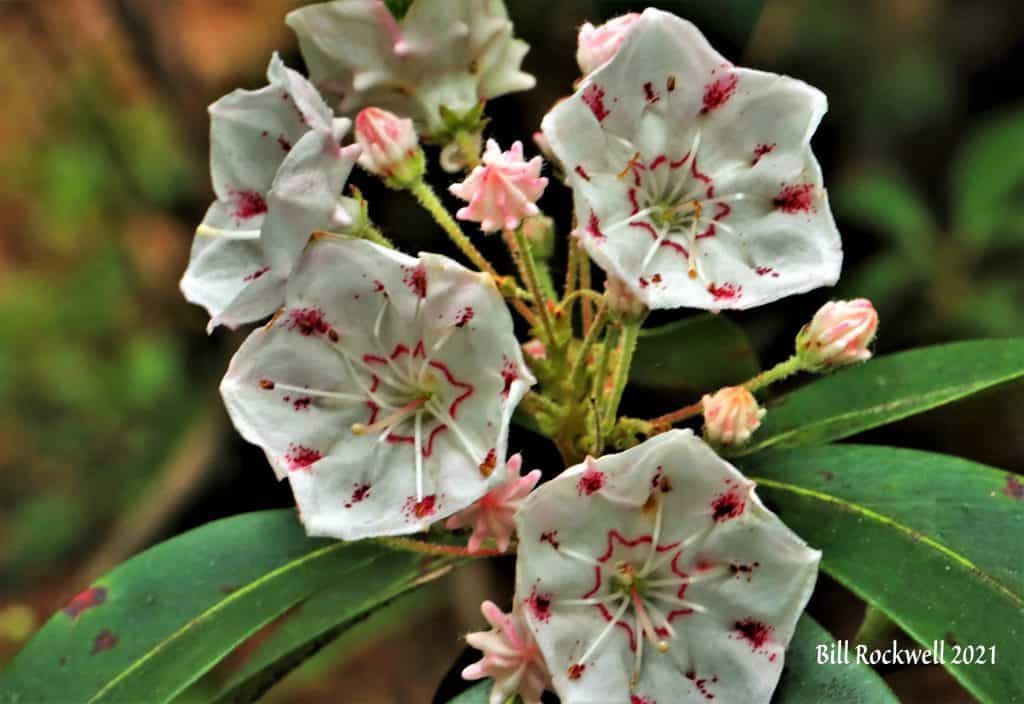 The scenery along the way was captivating. Here and there late blooming mountain laurel added floral interest, but mosquitoes buzzed me here and there, making me wish I’d brought along my insect spray. When I reached the sound of a small waterfall, a fellow hiker told to make a turn to the right, then uphill to Raven Rock overlook, just a few hundred yards away.

Bill, my photographer, beat me to the site by a minute or so. When I arrived he said he‘d just seen a big hawk perched on a nearby rock that flew off as soon as it saw him. I was thrilled to catch a pair of turkey buzzards making their wavering soars through the air below. Standing as close to the edge as I dared, I gazed at the majesty of the green carpet of trees that ran up and down both sides of the valley and vowed I‘d return again some sunny autumn day for some dazzling leaf peeping grandeur.

Ironically, the nearly 1.75-mile hike back to the car seemed to go faster and easier than the trip down. Again, those darned joggers seemed to mock my attention to the stones in the trail as they raced by in their shorts and sneakers.

The entire round trip took maybe an hour and a half at most with stops to take in the view. Back at the car, there was still time for a stop at the Henry Clay Iron Furnace, which dates back to c. 1834 and is now on the National Register of Historic Place. History buffs take note. The 30-foot-tall pyramidal stone structure was the first steam powered blast furnace in Western Virginia.

If you’re wondering about how Coopers Rock gets its name, the unverified account says it derives from a fugitive cooper, who hid from the law among the rocks and made barrels for local residents. Others say it takes its name from the cliffs capping the gorge. Inveterate romantic that I am, I go for the fugitive story. 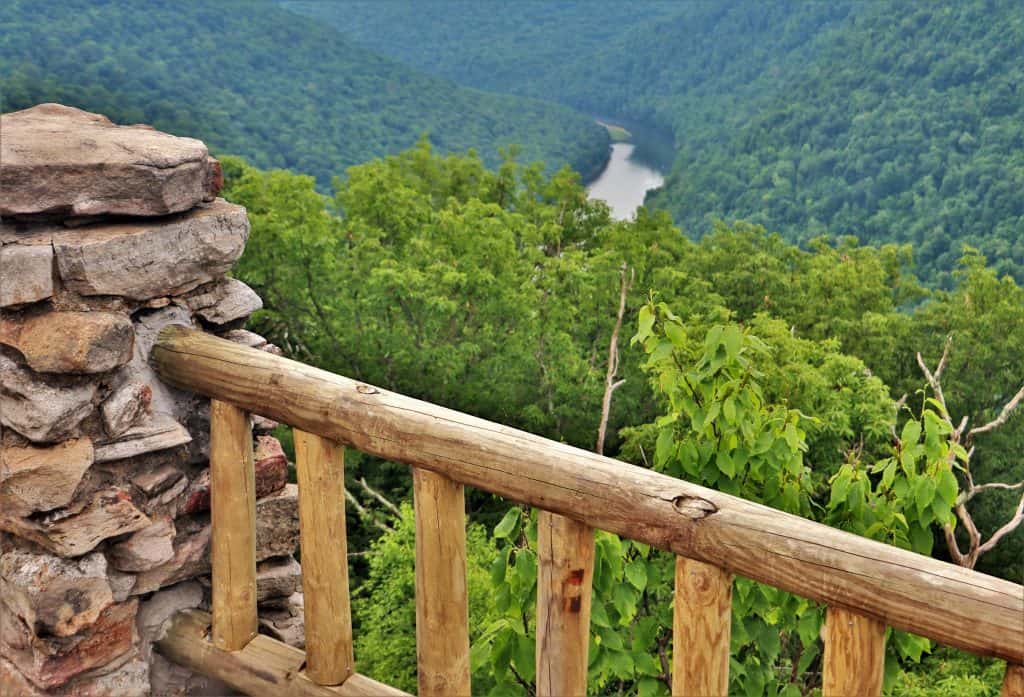 Looking into the Gorge from the Overlook.

The entire area is part of the 12,747-acre Coopers Rock State Forest. Besides hiking along a choice of 21 trails rated easy to moderate to steep, the area offers biking, cross country skiing, fishing, bird watching and the aforesaid rock climbing. The forest offers two campgrounds. McCollum has 25 sites open to both tents and RVs; heated bath house and WiFi. Rhododendron has sites for tents only, and both campgrounds are open April 1 to December 15.

For cabin lovers, Mountain Creek has 8 of them with fully equipped kitchens, hot tubs, porches and fireplaces.

For more adventures, head over to the Adventure West Virginia Outdoors Education Center for some zip-line fun. It’s just a quick drive across the bridge from Coopers Rock.

For more information on the greater area, phone 800-458-7373 or go to www.visitmopuntaineercountry.com. For a handy discount booklet for lodging, dining, activities and shopping, log on to www.MountaineerDeals.com.

For a cozy overnight stay, the Morgantown Marriott at 2 Waterfront Place overlooks the Monongahela River. Not only does the hotel have an impressive décor and amenities like from WiFi and parking, an indoor pool and fitness center, it also skirts the Mon River Rail Trail. Phone 304-296-1700.

A short ten-minute walk from the Marriott along the trail took me to Oliverio’s Restaurant, 52 Clay Street, with indoor and outdoor seating on a deck overlooking the Mon River. The restaurant focuses on Italian fare but includes other selections such as steaks and seafood with pizza and hoagies for lighter diners. 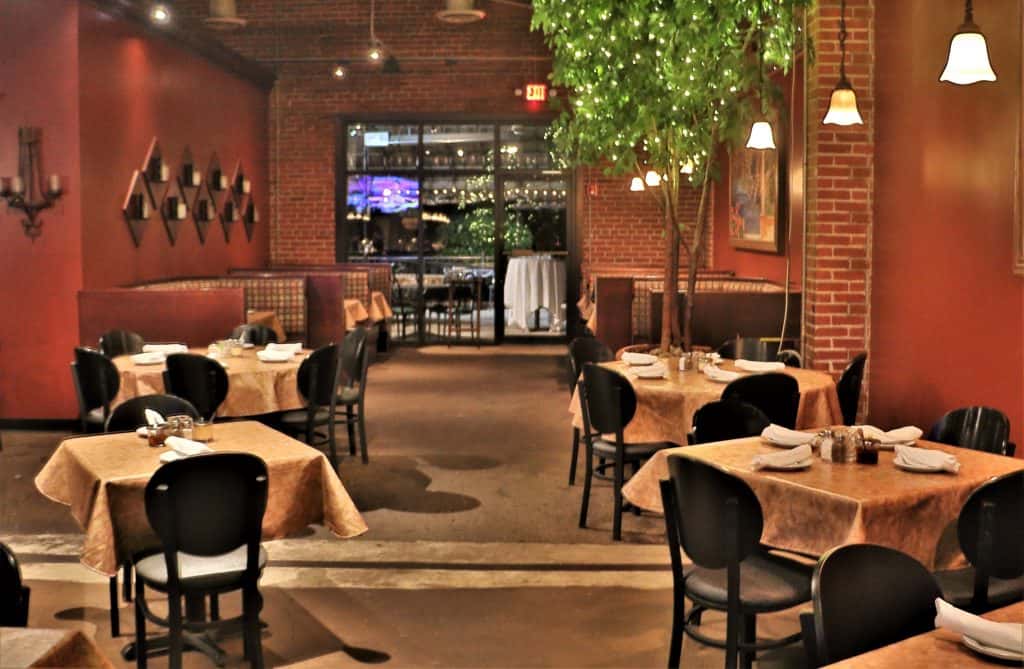 Portions are large and tasty and favorites include the stuffed banana pepper appetizer, the veal Marsala and baked stuffed flounder. Wine and cocktails are available.

Note: If you walk the trail, which is shaded by large trees, be sure to include a look at the Ruby Amphitheater and the large art installation titled “The Singing Tree of Diversity.” The glass and mirror mosaic was made by over300 participants led by artist Deborah Palmer who intends to show that the strength of the town lies in the diversity of its residents.