Home » Blog » The Crisis of Classical Music in America: Lessons from a Life in the Education of Musicians

The Crisis of Classical Music in America: Lessons from a Life in the Education of Musicians 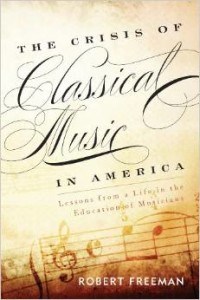 Dr. Robert Freeman’s book may interest you if you’re an aficionado of classical music. If you’re not a lover of orchestral instrumentals, operatic choral productions, symphonies, and the like, then this may not be the best choice for filling your spare time while traveling. If you like reading books with source citations and a fairly academic style, you’ll be fine reading Freeman’s book. If reading of, for example, young children’s use of “simple sequential structures, ostinatos, and miniature rondos” (chapter 4) just doesn’t do it for you or seems too rarefied, then this book may not suit you. Audience matters in virtually all writing, and Freeman has evidently chosen to write for an audience largely comprised of people who have failed pretty miserably for decades in developing sustained audience support for classical music.

Let me explain. As Freeman notes, appreciation and demand for classical music have steadily waned in the USA for decades, and this is partly attributable to professional musicians’ failure to develop enthusiastic audiences. Freeman touches on many issues related to this, including the music’s relevancy and delivery format, musicians’ insufficient communication and analysis skills, trends in artistic tastes and national values, overspecialization in music education, artists’ ignorance of key stakeholders, and so on. As others have written of before him, Freeman repeatedly, if not originally, drives home the point that America has a big problem of supply and demand when it comes to the enterprises of learning and performing formal, professional, classical music. The reasons for this are manifold and complex, so you have to admire Freeman’s attempt at least to touch on the factors that have created our nation’s sorry situation of too little demand for classical music that translates into career-worthy, paying jobs (there’s that audience issue coming into play) relative to too great a supply of formally trained instrumentalists, singers, composers, conductors, and music teachers, most of whom cannot find paid, professional musician’s work.

I say that Freeman touches on the factors and issues, rather than analyzes. Freeman’s book is reasonably cogent, but is not especially deep in analysis, perhaps because of the sheer breadth and depth of the issues involved. His most detailed treatment appears in his chapter advising deans and directors of collegiate music schools. This is natural since the bulk of Freeman’s distinguished career has been as a dean. Much of Freeman’s book is anecdotal and some of it is thickly autobiographical, so some readers encountering anecdotes instead of analysis and history instead of evaluation may be left wanting more (but they can readily turn to sources Freeman cites and at times quotes verbatim at great length).

Readers who are politically, socially, or religiously conservative may be at best amused and at worst offended by some of Freeman’s material, particularly where his metaphors and examples seem inapt or gratuitously negative or sycophantic, depending on whether he’s lauding President Obama or backhanding the Tea Party. Readers who share Freeman’s worldview will be duly entertained. Whether alienating prospective members of the very kind of enlarged audience Freeman desires for classical music is prudent will depend on just how many of them are wealthy (such as many travelers served by this web site) and capable of directing funds toward or away from musical beneficiaries. On the other hand, interested readers will appreciate Freeman’s advice to parents of college-bound kids on simply getting real about their children’s professional music prospects; to music students about the efficacy of double-majoring (music degree plus engineering degree is very good; music degree only is risky); to musicians on the merits of music as avocation versus vocation; to music educators on finding ways to make classical music more enjoyable and interesting to non-musicians; and so forth. Again, little of what Freeman recommends is original or new, but it is refreshing to see someone who is so patently an insider of the classical music scene dishing out fair criticism for a state of affairs that he arguably had a large hand in creating during his career as a music dean, his desires and occasional efforts to the contrary notwithstanding.