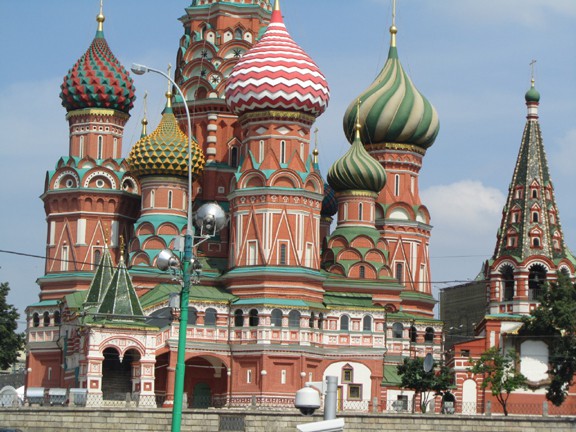 I sailed along the imperial waterways of Russia, traversing the path of Peter the Great from Moscow to St. Petersburg and along the way I was introduced to new friends and delicious local cuisine. I experienced a grand tour of the country from picturesque villages to golden domed churches, grand cathedrals and palaces.

The ship I chose for my journey was the Uniworld River Victoria, a Russian vessel which underwent a complete refurbishment in 2011. The long and narrow ship easily navigated under low bridges along Russian waterways and fit through narrow ship locks. The new ship décor, under the direction of Red Carnation Hotels designers, was bright and airy with shades of red, white and grey dominating the public areas. 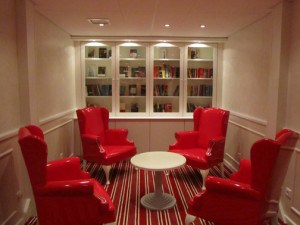 Public Area on Board

The ship has four-decks and a passenger capacity of 206. My stateroom had all the creature comforts. It was beautifully decorated in shades of blue and grey, had a sliding glass door and a roomy balcony with patio furniture and was equipped with a private bathroom, glass enclosed shower, hair dryer, safe, dual electric plugs for my appliances, flat screen television, desk and chairs. The ship also has an Internet café and library.  The Chagall Lounge andKatrina Bar offer expansive views of the countryside. Servers are pleasant and do not push drinks, but let passengers take in the surroundings.

What I especially liked about the Uniworld Cruise is that the line caters to English speaking people. The announcements were made only in English and the staff while mostly Russian, spoke English to the passengers.

My journey began inMoscow with three full days to explore the city and the world famous sights such as Red Square, the Kremlin and the onion-domed St. Basil’s Cathedral. The city was impressive with its broad boulevards, bridges, fountains, art museums and hundreds of gilded domes. 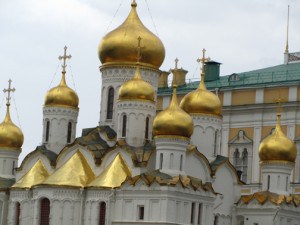 Golden domed church inside of Kremlin.

Included in the price of the cruise were excellent daily excursions by an English speaking local guide. We were divided into groups of 30 to 40 passengers and were given portable audio headsets, making sure we didn’t miss any of the commentary by the well-informed tour guides.

I took an optional tour of theMoscow subways and was impressed with its crystal chandeliers, life-size marble sculptures, mosaics, stained-glass and bronze works of art. I also walked through the magnificent GUM Department store and its numerous gourmet food departments. The GUM complex is actually a shopping mall with three tiers of all the world’s brand name stores as well as some uniquely Russian boutiques. Restaurants dot the complex and you can enjoy a cup of coffee and a snack at one of the eateries facingRed Square. 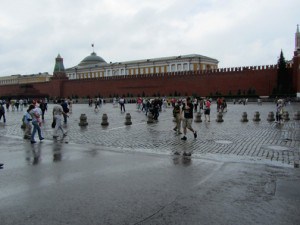 During the evening inMoscow, the entertainment on board the River Victoria included an orchestra of local musicians playing Russian folk instruments. 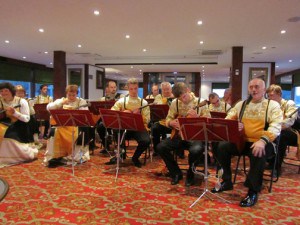 Following our stay in Moscow, the ship sailed the picturesque Moscow canal andVolga River to the cities of of Uglich,Yaroslavland Goritsy. The scenery was spectacular and I also enjoyed the opportunity to pass through a total of 18 locks on our route fromMoscow to St. Petersburg. Standing on the deck of the ship while we were in a lock was fascinating. The process takes about 20 minutes and once the ship is inside the lock, the gates are lifted from beneath the surface by powerful electric winches, enclosing the ship within the lock.

We were also entertained enroute with a Russian blini making demonstration, lectures on Russian history and vodka seminars. The ship also has an elegant spa and a workout room, but I never had the time to exercise because there were so many other once-in-a-lifetime activities to enjoy.

We sailed toKizhi Island, the UNESCO World Site containing the Church of the Transfiguration, which was constructed entirely out of wood without using a single nail. We were given a walking tour of the Kizhi Open Air Museum of Wooden Architecture and visited the Intercession Churchand peasants house presenting the nineteenth century lifestyle. 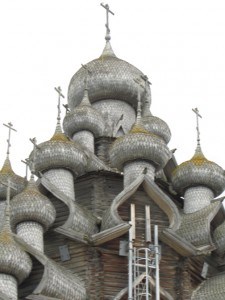 Church of the Transfiguration,Kizhi Island

Cruising the Svir River, we stopped at the 18th century village of Mandrogi, where we watched the locals making many well-crafted pieces of Russian folk art from beads and lace, to clay pots, wooden toys, glass artifacts and many other souvenirs that were sold throughout the country, including the Russian nesting dolls. We also feasted at a picnic on shore in Mandrogi. 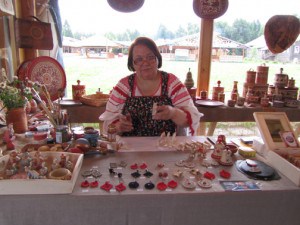 During the last three days of the cruise we explored St. Petersburg, where we were given a panoramic tour of the city with visits to the historic heart of the city and St. Isaacs Cathedral, Admirality Tower, palaces and churches  surrounded by waterways and canals. In the evening, all the ship’s passengers were taken to the historic Alexandrinsky Theatre, where we were treated to a spectacular Russian ballet accompanied by a orchestra of seasoned musicians. 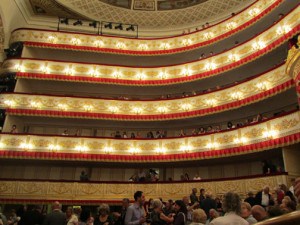 No visit toSt. Petersburgwould not be complete without a visit to the Hermitage Museum. Always crowded with tourists, the ship arranged for early admittance to the Museum, so passengers could enjoy the works of art by the masters from Monet and Michelangelo to Renoir and Rembrandt. The collection contains more than three million pieces of artwork from ancient to contemporary and includes Western European art, prehistoric art, Russian culture and Oriental art in five buildings located along the riverside. From west to east, the Hermitage was the Winter Palace commissioned by Empress Elizabeth and later remodeled in a classical style by Catherine the Great.

Other featured excursions inSt. Petersburg included a visit to the Catherine Summer Palace in Pushkin, a masterpiece of Russian Rococo architecture, with its many rooms decorated in gold. 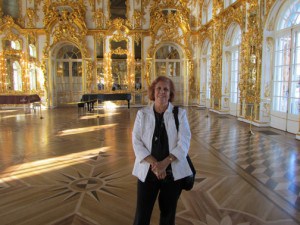 The river cruise provided a stress-free way to visit Russia. I especially enjoyed the well-planned ship tours throughout the voyage that included some of the world’s finest art and architecture as well as visits to small villages with Old World charm.

The international and Russian cuisine served on board was excellent. Breakfast and lunch were served buffet style and dinner was served by an attentive wait staff. Beer, wine and soft drinks were included with dinner. I took pleasure in the open dining seating policy on board and had the opportunity to meet most of the 200 passengers and dine with people from Great Britain, New Zealand, Australia, Belgium and from the United States.

While inSt. Petersburg, I took an excellent Jewish heritage tour with Milk and Honey Tours. Inna Alexeeva was my guide and she was well informed with the Jewish community. She escorted me to the YESOD Jewish Community and Cultural Center in St. Petersburg. The approximately $14 millionYESOD Centerwas built in 2005.  World ORT and Hillel have offices in the building as well as many other Jewish agencies.  Alexeeva said the Jewish community is not officially counted but it ranges from 75,000 to 150,000 in St. Petersburg.

A Jewish presence is thriving inSt. Petersburg and includes the majestic Grand Choral Synagogue with its gold, blue and white ornate wood carvings surrounding its ark. A modern mikvah was constructed in the synagogue in 2005 and there is also a kosher market, gift shop and kosher restaurant in the synagogue.

A Holocaust Memorial, erected in 1991, is located in Pushkin, just outside the city near Catherine’sSummerPalace.