Adieu to Summer at Deep Creek’s Wisp All Season Resort 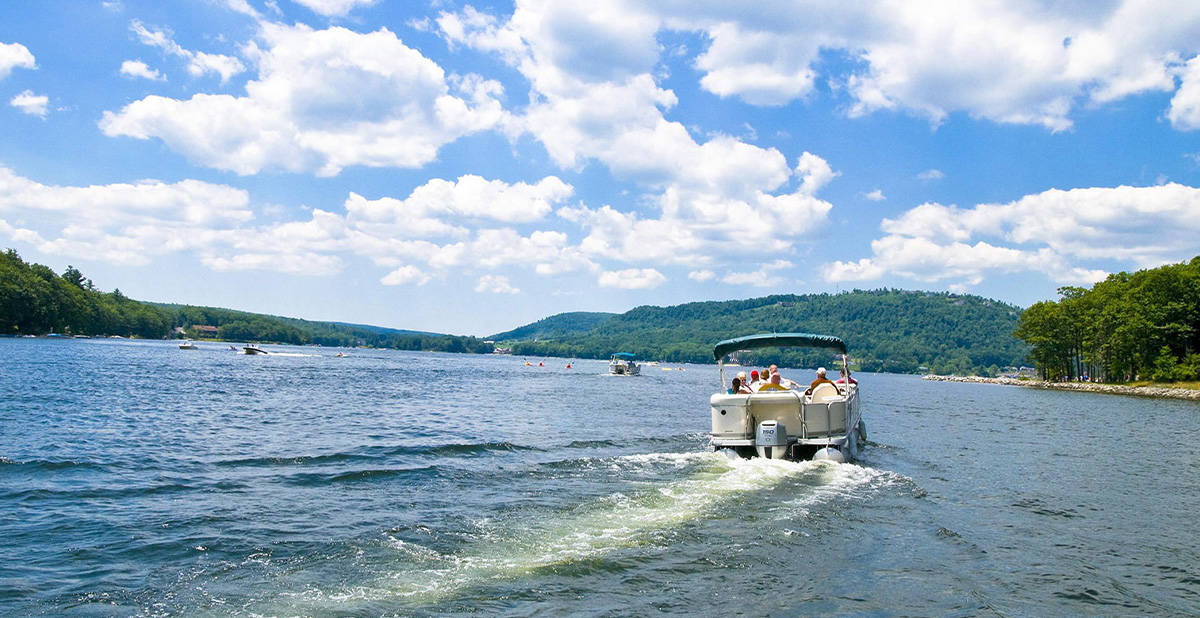 When I boarded the pontoon boat at Deep Creek Lake State Park I expected a relaxing ride along the shores of Maryland’s largest inland body of water. While I got what I expected, the engrossing narrative of skipper Bob Salvucci added much to the experience.

“You want to explore the north or south ends of the lake?” Salvucci asked as we set off from the dock. “The north takes in the town of McHenry, the ski area and the dam. The south includes a look at the house Einstein vacationed in back in 1946, the beautiful shoreline with some incredible mega-mansions and the sailboat section of the lake, home of the Turkey Neck Yacht Club.” 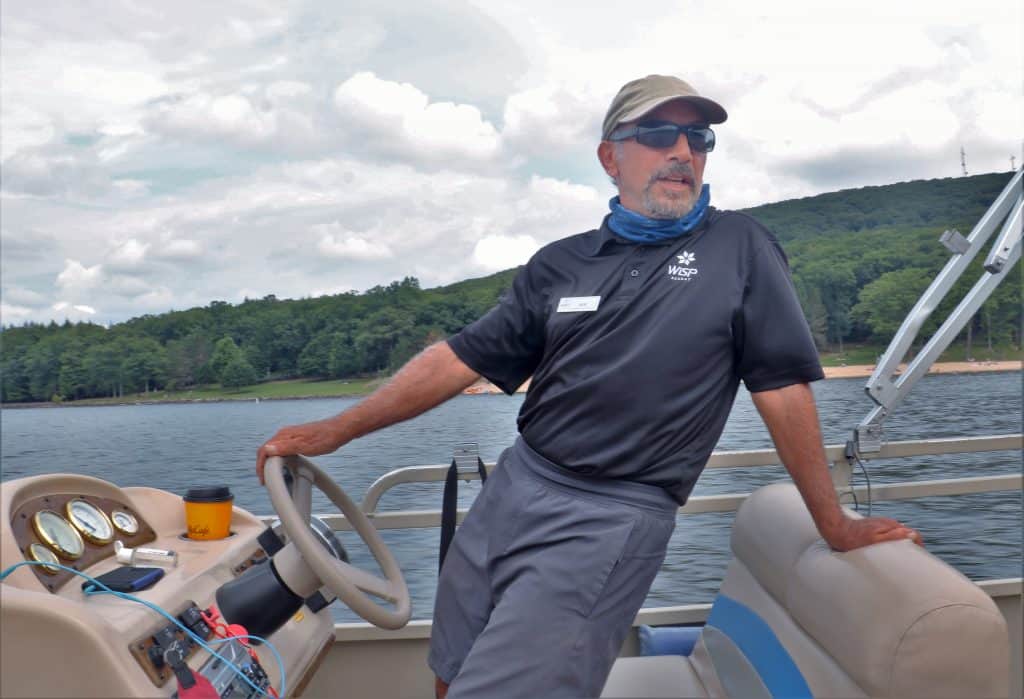 Our party of seven picked south, and off we went as Salvucci began telling us a bit of local history with amazing panache and verve.

“This area was once the summer vacation spot for folks from Baltimore who wanted to escape the humid urban temperatures,” he said. “To accommodate travelers to the area, B & O president John Garrett built the rail lines to the villages of Deer Lake, Oakland, Swanton and McHenry in the mid-1800s. The construction of grand resort hotels followed as up to 1,000 visitors arrived by train daily at the height of the season.” 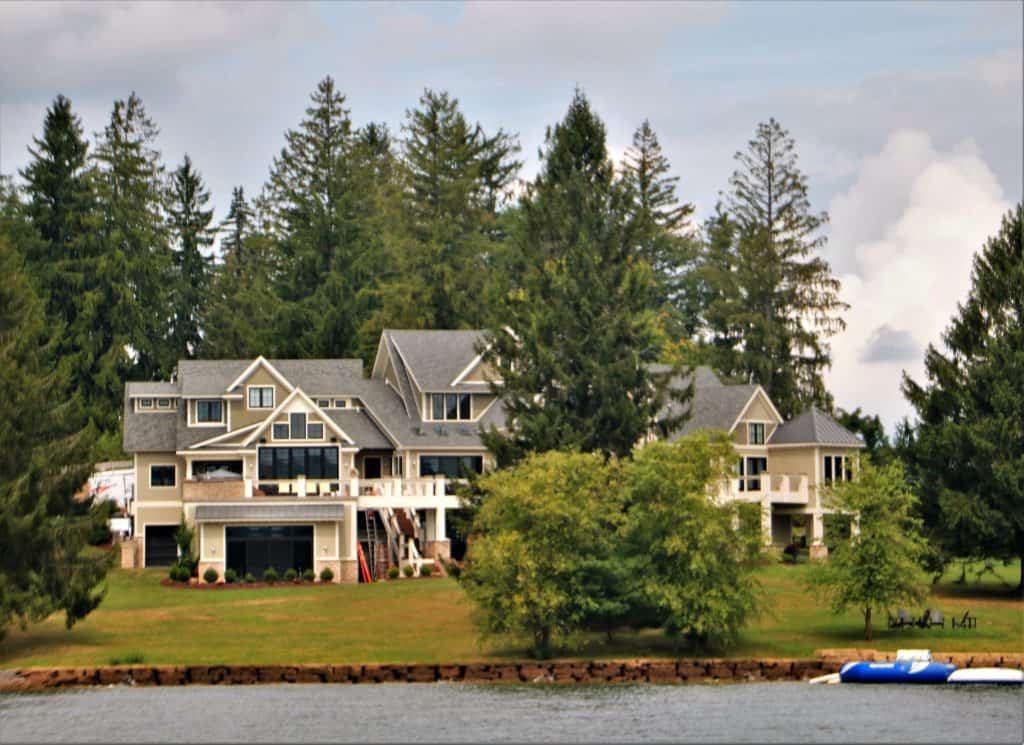 One of many mansions along the lake

THE LAKE was born in 1925 when the Youghiogheny Hydroelectric Company built an earth and rock dam wall 8 miles north of Oakland. As a result, the lake, with its 67 miles of shoreline, became a recreational playground for the residents of Pittsburgh.

Phase Two of the area’s growth came with the completion of I-68, when people in the Baltimore-Washington areas discovered the roughly 3,900 acre lake. Another surge occurred after 9/11 when people sought an escape from city life. Recently, the latest influx of people came with the onset of the coronavirus and the practice of working at home, which enabled people to live away from their place of employment. 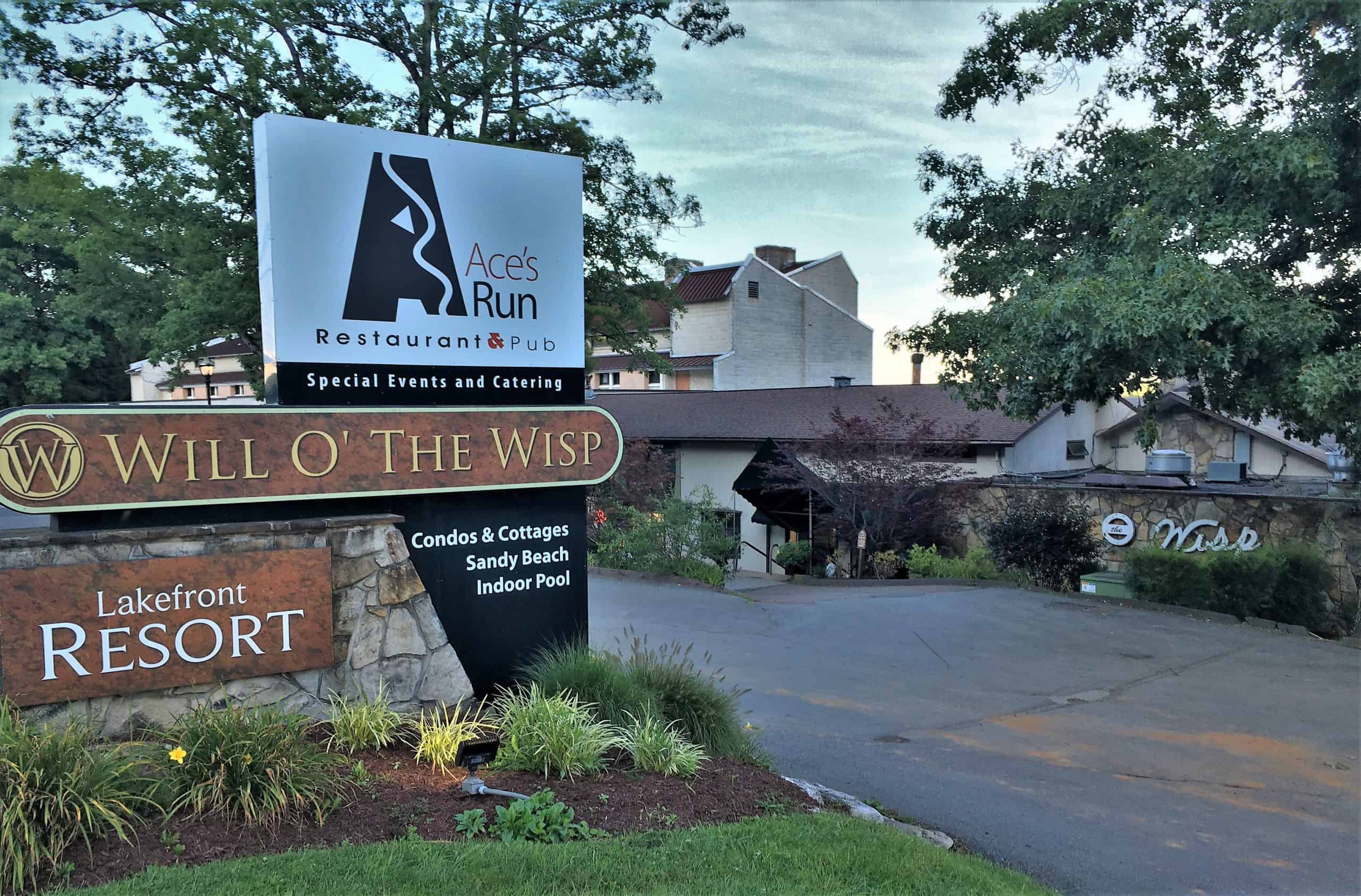 Besides giving us a rundown on some of the best places to dine (Dutch’s, Ace’s Run, El Canelo for Mexican, Brenda’s for pizza), Salvucci was big on stats.

“The average depth of the lake is 25-feet although the deepest part is 75-feet at the dam,” he said. “Eight presidents vacationed here and Grover Cleveland, the only president to enter the White House single, honeymooned here during his presidency.”

Interested in how the nearby town of Accident got its unusual name, I asked our loquacious guide. Salvucci answered by explaining that George Washington once sent out two scouts, in separate expeditions, to find the most suitable area in the region for settlement and both claimed the area around present day Accident. I guess the town could also be called Coincidence but accident makes a more interesting impact. 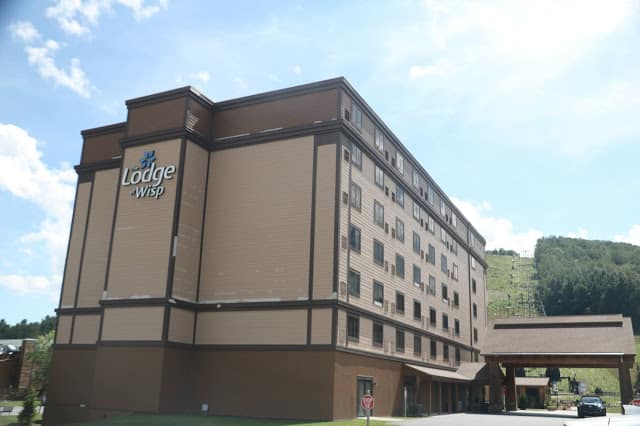 Outside the Wisp All Seasons Resort.

Salvucci also pointed out the Will O’ the Wisp resort and the adjacent Ace’s Run Restaurant, where I dined the evening before. “The Will O’ the Wisp began as a series of summer cottages along the lake in 1927 shortly after the dam was created,” he said. “An enterprising couple, Gustav and Alice Heise, eventually bought the place. Their son Ace later purchased the property from his parents and added a modern motel in 1954.”

As a way of drawing more visitors to the area, the Heises opened a modest ski enterprise nearby that eventually grew to become today’s Wisp All Season Resort. A brochure outlining the resort’s history states that the Heises started with a one room hut with a pot-bellied stove the served as the first lodge and the bed of a pick-up truck that operated as the first ski rental shop.

Today, Wisp has become Maryland’s only all-season ski resort. Not bad for an operation that began in 1965 with a single ski slope serviced by a tow rope.

My own visit took place at the tail end of August when I got to experience some of the resort’s recreational activities. (They include the aforesaid pontoon boat ride, which is available to the public as are all the recreational amenities).  I passed on a golf outing on the resort’s course, designed by 3-time U.S. Open Champion Hale Irwin and named the #2 ranked course in the state by Golf Week magazine four years running, in favor of two alternate activities. 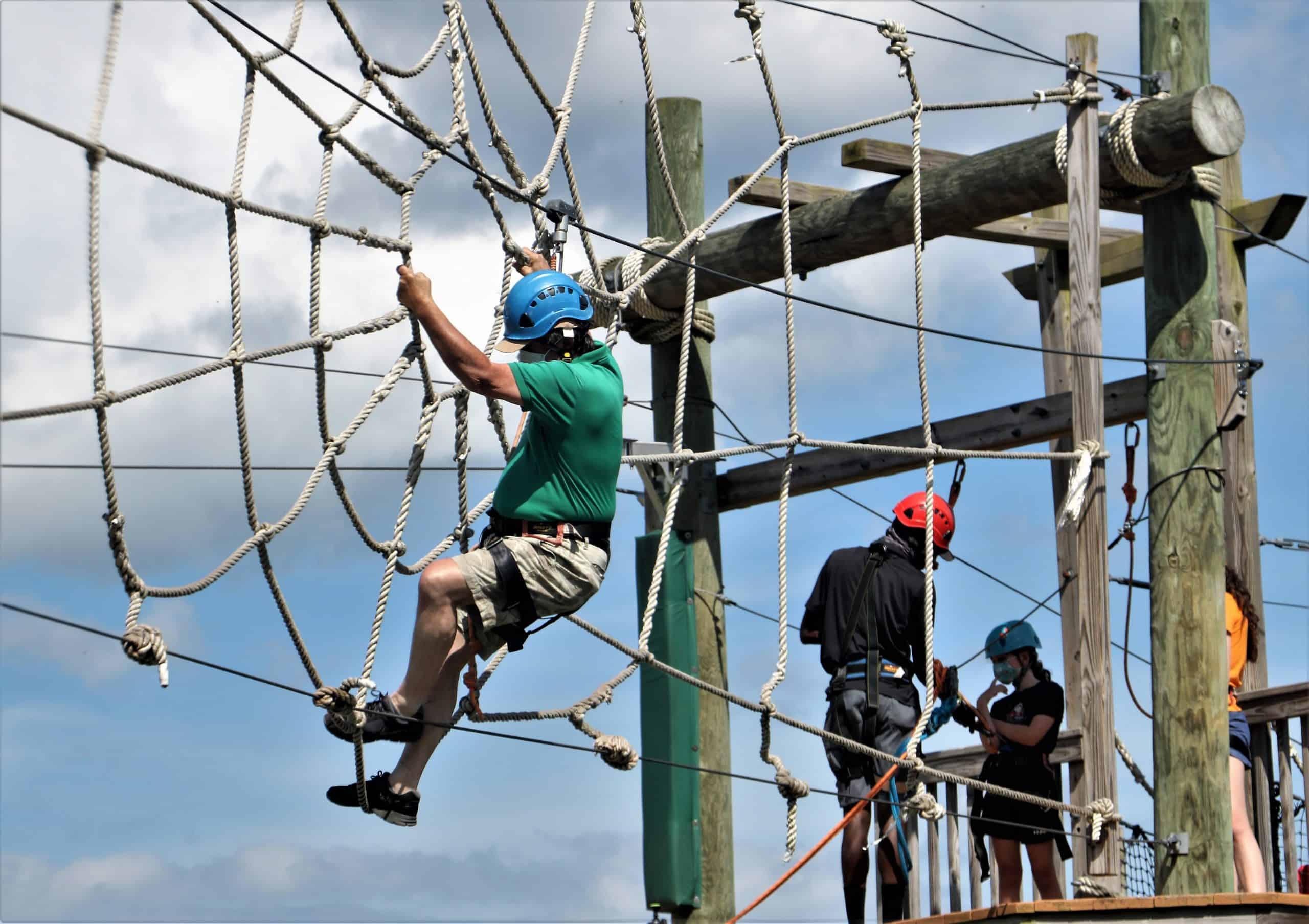 First obstacle on the Spider Monkey.

The first, Wisp’s Spider Monkey Adventure is something I always wanted to try. Suited up in a harness and helmet zip-line style, I mounted the platform with a nonchalant assurance and headed off on the 40-foot spider web, the most difficult of the 6 obstacle/experiences. I soon learned that the rope web was so loose I kept leaning over backward over my center of gravity and had to use every bit of upper torso strength to get me across. Obviously, I underestimated the skill it requires to complete the course.

The second section is a series of slats on a rope mounted 20-feet above the ground. That one was easier than it sounds. Next came the “Tilt & Hop,” a series of see-saw slats you have to walk over, followed by the “Silver Surfer,” a skateboard that glides over ropes. Here I misjudged my footing and ended up dangling from my safety cable until I managed to retrieve the board and remount it after mustering up my energy reserves. 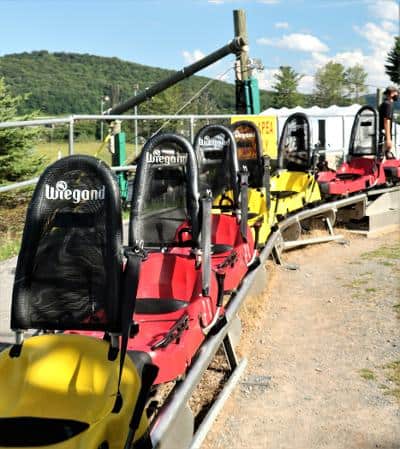 Cars line up waiting for the Mountain Coaster.

Exhilarated by the sheer physicality of the Spider Monkey, I headed for the Mountain Coaster, a single small car that you get to sit in and relax. After the car is pulled to the 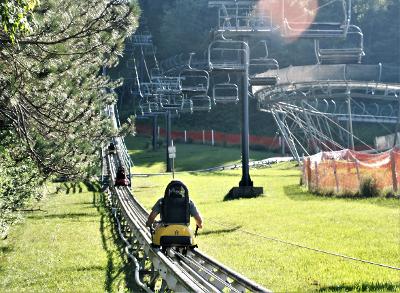 Anticipating the steep climb of the mountain coaster.

top of the mountain by cable, it’s released and begins a downward ride that can get pretty speedy, depending on how hard you pull back on the brake lever. Those riding with children can tailor their speed accordingly as the cars are released at a safe distance from one another to keep them from bumping into one another.

I ended my day at Wisp with a glass of wine sitting around the outdoor fire pit, talking to some of the other guests and telling them about the day’s adventures.

I spent the night at the Lodge at Wisp, a 160-room hotel with 6 different room types. In the winter, the all-season resort offers 33 ski slopes, snow tubing, cross country skiing and snowshoeing. I’d also recommend an October visit, when the leaves turn their most brilliant color. Salvucci says it’s one of the best times for a pontoon boat ride.

For a place to dine, Deep Creek Seafood, 200 Quarry Road in Oakland, Md. is located on a slope with a nice view of Deep Creek Lake. 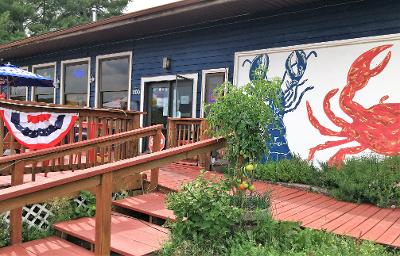 Outside at Deep Creek Seafood.

Originally from Pittsburgh’s South Hills, Beachler said he’ always worked in food service, including a stint at N & L Seafood in Mt. Lebanon’s Galleria. He vacationed in the Deep Creek area often because his Dad had a home here.

As you might expect from the name, DCS serves a lot of fresh seafood items and the portions are big. So big our appetizers could have stood in for entrees. On a calamari kick lately, I tried Beachler’s version, interestingly served over a bed of warm Asian slaw enhanced with a spicy Thai ginger sauce. It was one of the best preparations I’ve ever had.

.In addition to offering  several sandwiches, the entrees are the meat of the menu. I’d recommend the Florida grouper, grilled or blackened, and the Canadian Snow Crab Clusters. At the moment, owner Nate Beachler is offering patio seating and curbside pickup only.    Phone 240-488-1042 or deepcreekseafood.com.

Right on the lake (try to get a patio seat), Ace’s Run Restaurant & Pub, 20160 Garrett Highway in Oakland, has been around since November 1961. Currently, Brenda McDonnell, owner of Brenda’s Pizzeria and Traders Coffee House, is carrying on the family tradition of her parents-in-law, serving some of the best food in the area.

If you go for dinner in the evening, the place glows with a magical charm. During the daylight hours, the view of the lake is one of the best around. The lunch menu is eclectic  and covers a lot of culinary turf,; the dinner menu is creatively prepared with a dash of panache. 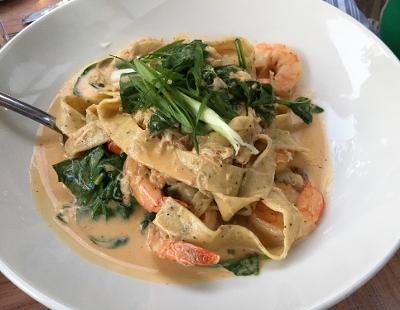 Recommendations include the modestly titled Seafood Sauté (richly made with shrimp, scallops, and lump crab in a creamed Old Bay sauce), served with grape tomatoes, wilted spinach and pappardelle pasta. Save room for the warm banana Nutella bread pudding with rum sauce adorned with an edible white chocolate lattice.