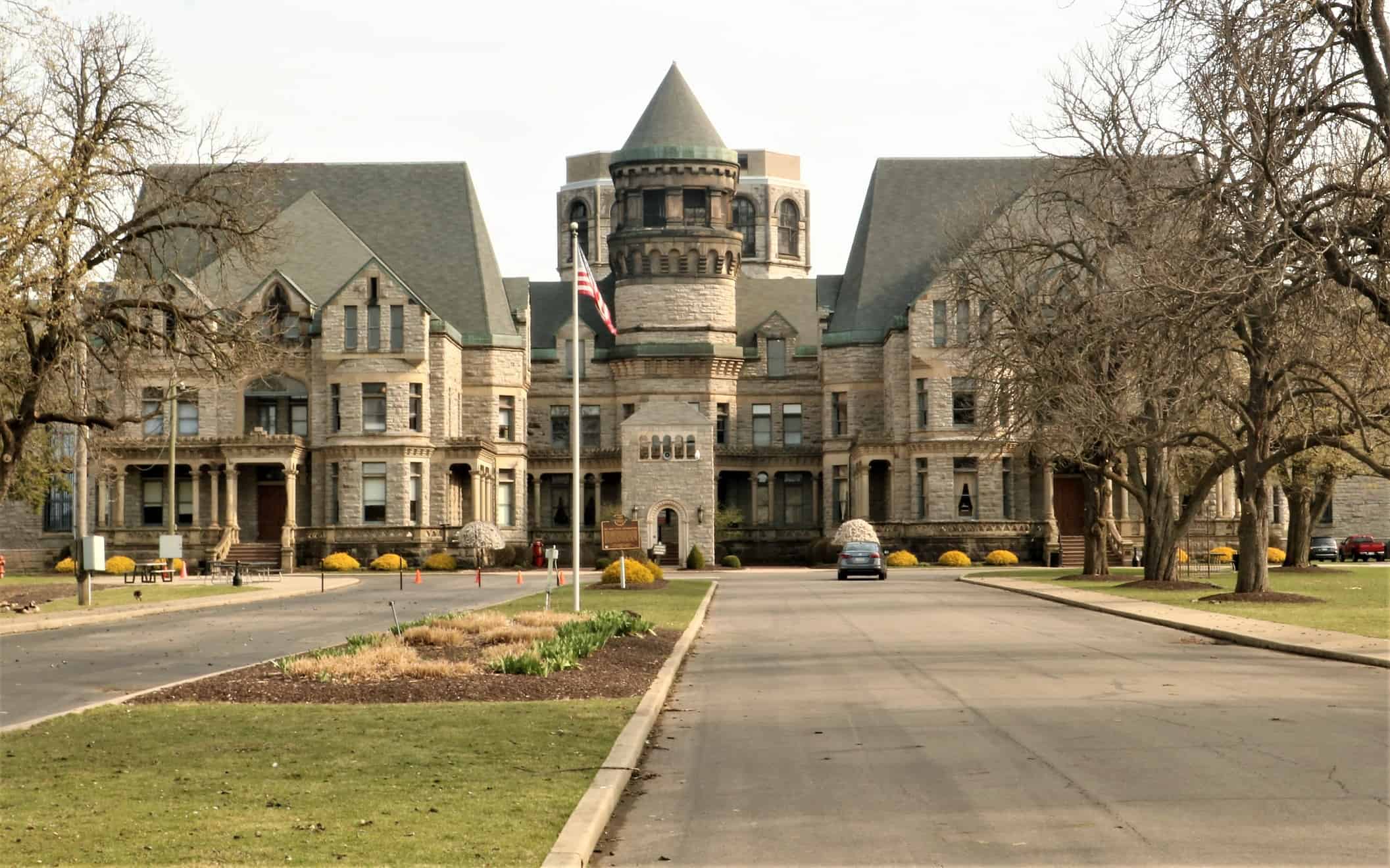 It’s widely known that name dropping can often spark excitement and interest in an ordinary conversation. If that’s really the case, Mansfield, a small Ohio town located between Cleveland and Columbus, certainly has plenty of fuel for local residents to heat up their small talk banter. How about Tallulah Bankhead and Lauren Bacall for starters?

Raison d’Être for a Visit

Mansfield has been on my bucket list of future visits for years, but I never got around to checking it off until this Spring. Home to the Ohio State Reformatory, where much of the movie “Shawshank Redemption” was filmed, I wanted to add the notorious prison to my list of seven other institutions of incarceration I’d visited before like Alcatraz and Eastern State Penitentiary in Philadelphia.

One weather-perfect weekend in early April, I finally made the trek to this central Ohio town. While I eagerly anticipated my tour of the “Reformatory,” I encountered a lot more than I expected during my stay starting with Malabar Farm and its surprising ties to Hollywood. Owner Louis Bromfield, earned a sizable income as a writer and Pulitzer Prize winning author. After living in France off and on for years, hobnobbing with Gertrude Stein, F. Scott Fitzgerald and Earnest Hemingway, then traveling to India several times, where he sometimes stayed for months, he returned to his agrarian roots near Mansfield. 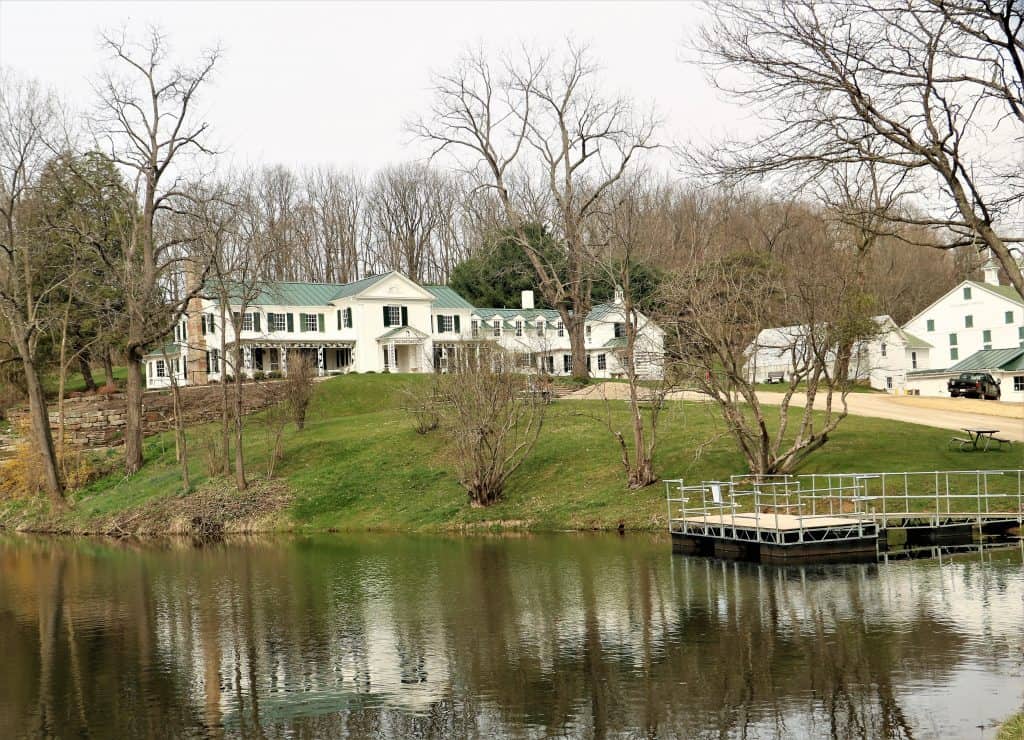 The “Big” House and Barn at Malabar Farm.

With money earned from his novel “When the Rains Came,” he bought a 600 acre farm on which he built a 32-room manse he called “The Big House” and adopted and promoted soil conservation practices.

The staircase at Malabar Farm where Lauren Bacall came down on her wedding day.

Because some of his novels were made into movies, Bromfield had a strong Hollywood connection, and several stars and celebrities of the day visited him at the farm. In 1945, Malabar Farm hosted the wedding of Humphrey Bogart and Lauren Bacall, an event that really put his experimental farm on the map.

Bromfield had one simple caveat for celebrities visiting the farm. They had to help out with the chores, and rumor has it that Tallulah Bankhead was once spotted selling vegetables at his roadside stand.

Following his death in 1956, the farm became a state park, the only one in the state considered a working farm complete with live animals  Visitors can take guided tours of the farm, big barn, outbuildings and Western Reserve-style home. 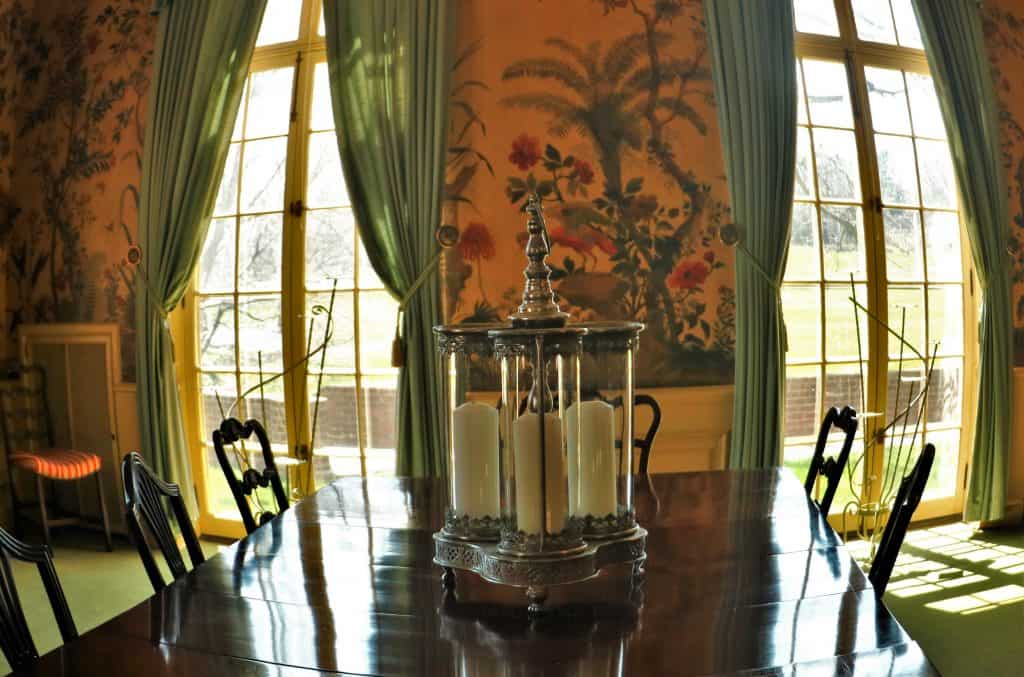 The farm also boasts four trails, most of which are about a mile in length. 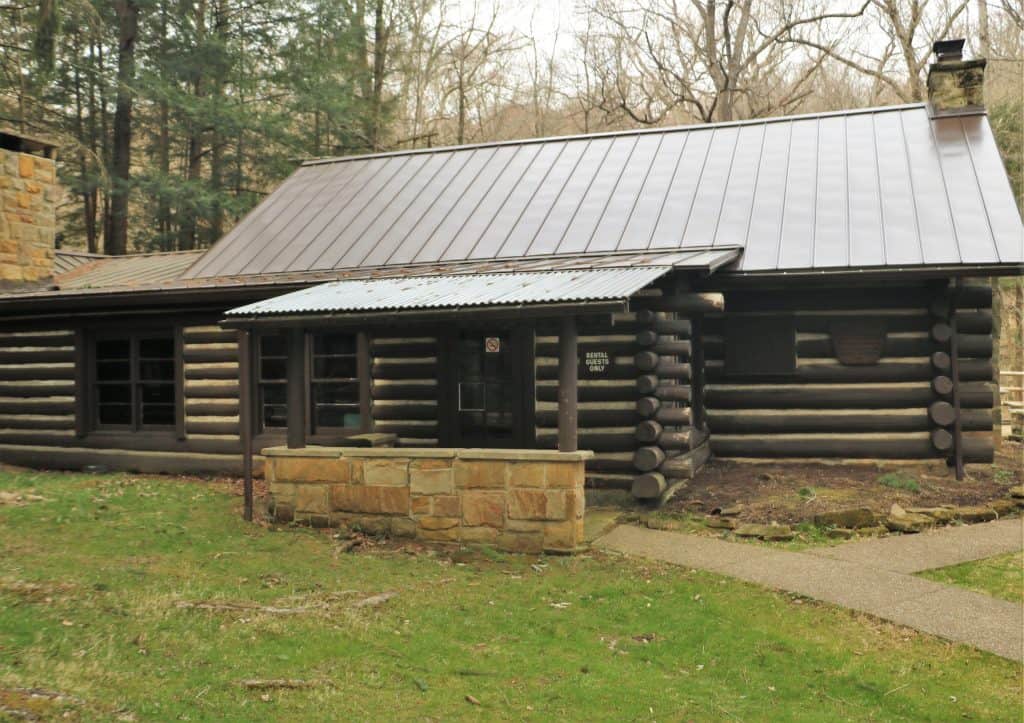 The Pugh Cabin at Malabar Farm.

Those interested in the film “Shawshank Redemption” might want to add the Pugh Cabin to their visit. The cabin, located at a remote site on the farm, served as the opening scene of the film where Andy was shown loading his gun in an attempt to shoot his adulterous wife and her lover. The cabin is one stop on what is now known as the Shawshank Trail, locales and buildings where the film was shot in and around Mansfield. Phone 419-296-6528 or Malabarfarm.org.

include the Bissman Building/Brewer Hotel  (now closed) at 193 N. Main St., where Brooks lodged following his prison release, KV Market at 359 W. Fourth St. which served as a grocery store, and the Revivals 2 Thrift Store at 345 Orange St. in Ashland, which functioned as the Trailways Bus Station in the film. 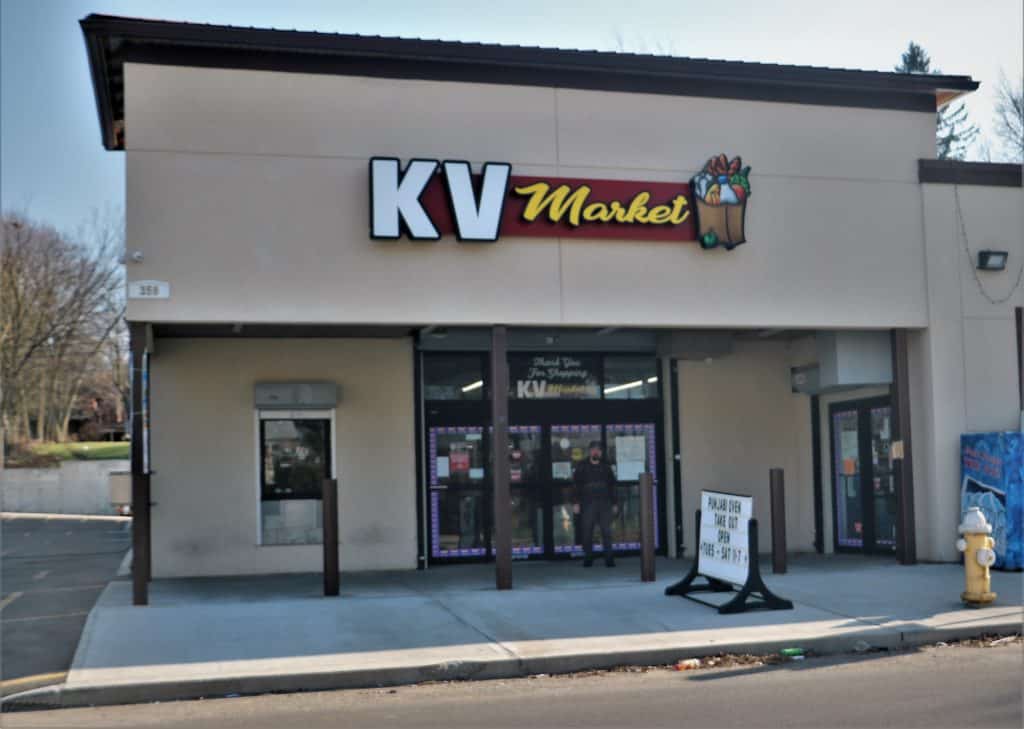 From the Movie the Shawshank Market. 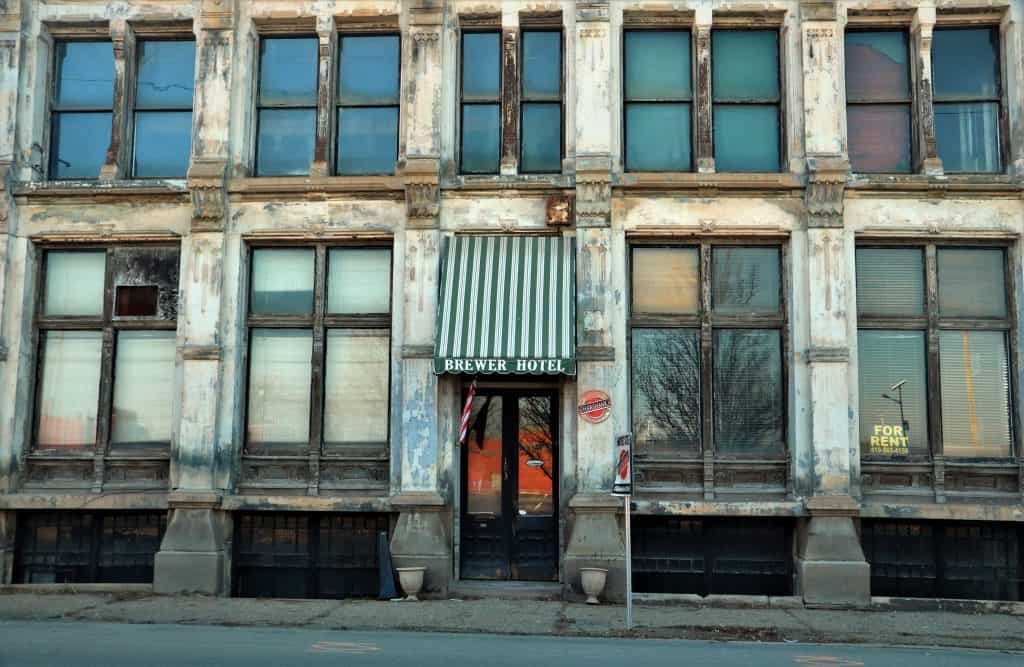 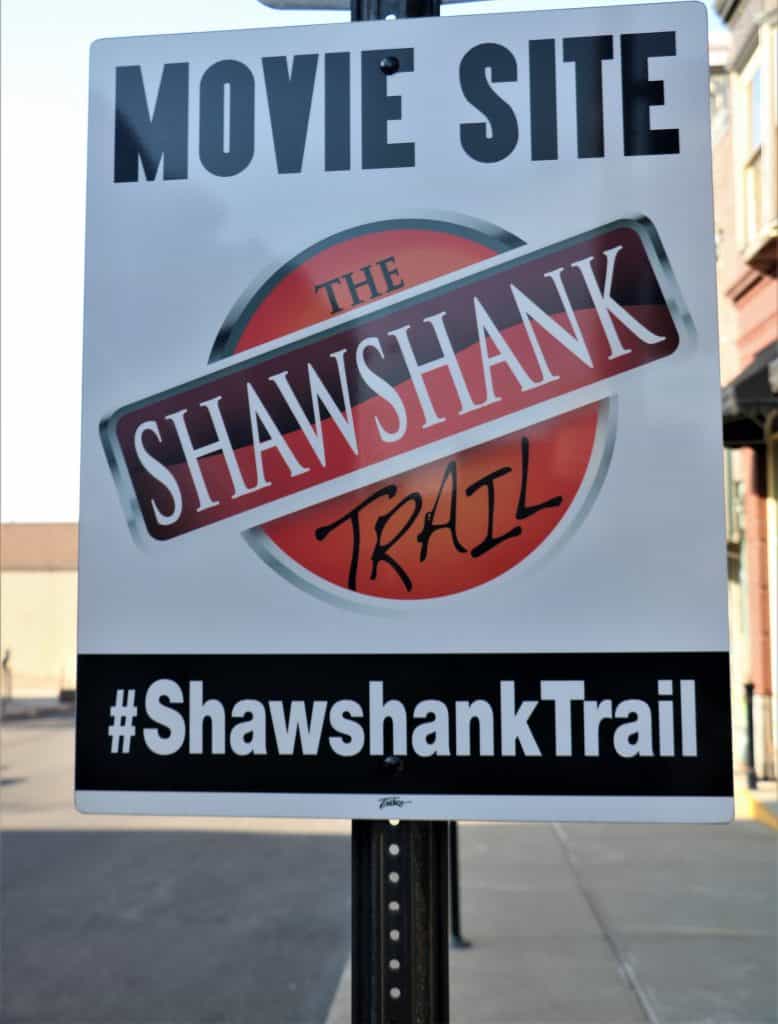 A Stop on the Shawshank Trail.

After leaving Malabar Farm, you might want to consider driving to the top of nearby Mt. Jeez, a scenic overlook from which  it’s said you can see seven Ohio counties. 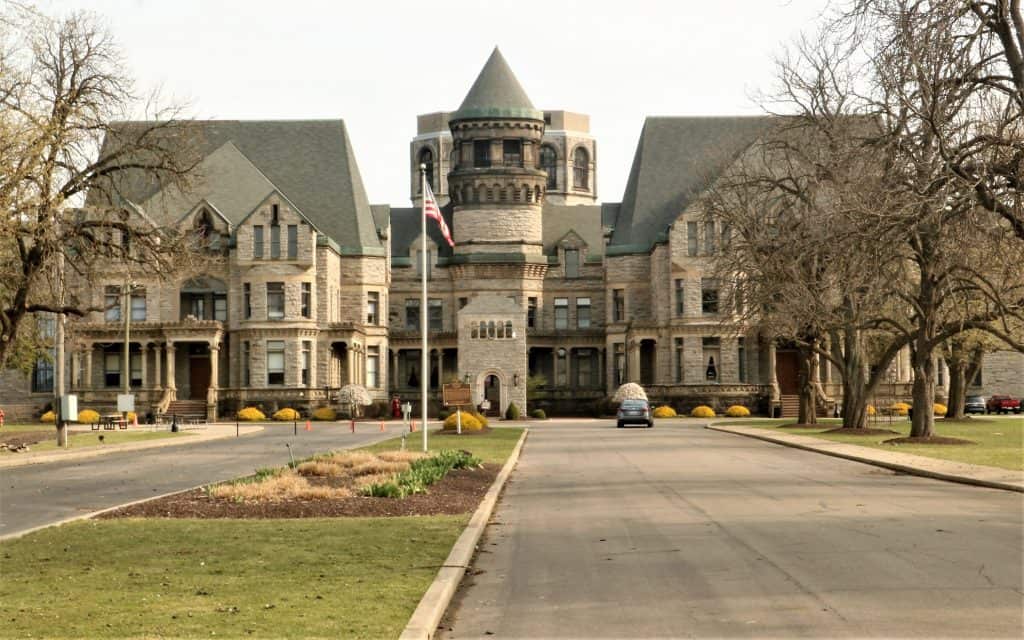 The drive up the tree lined roadway leading up to the Ohio State Reformatory is a pleasant one. Sadly, it was the last open green space the over 155,000 inmates incarcerated there over the years would see for quite a while.

From the outside, the building’s castle-like appearance is gorgeous. Architect Levi T. Scofield combined Victorian Gothic, Richardsonian Romanesque and  Queen Anne styles to create a building that would, he hoped, “inspire the inmates to return to spiritual values.” Scofield liked to say his building was “half German castle, half Gothic church.” 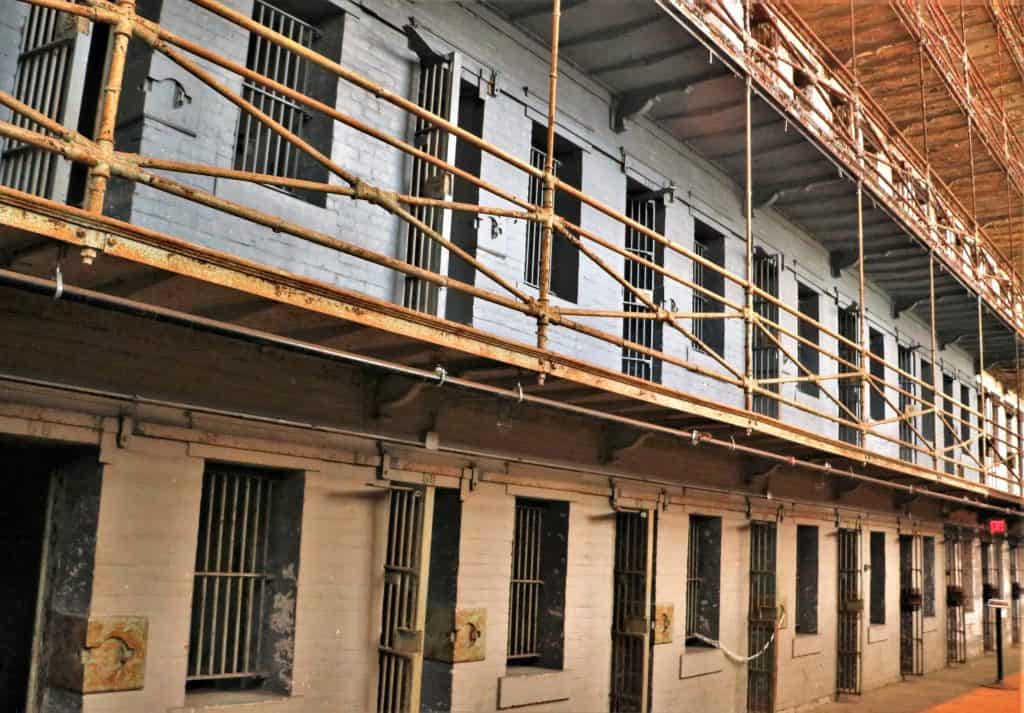 As an indicator of the reformatory’s massive size, the East Cellblock is 6-tiers high with 600 cells that held a total of  1,200 inmates. When completed, the cellblock was the largest of its kind in the world and broke a world record.

Inside the “joint,” as the inmates called it, was another story as the prisoners lived in small 8 by 5-foot cells which were badly heated in winter and often torrid in summer.

Eventually, the prison closed in 1990 by federal court order after the prisoners filed a class action suit claiming overcrowding and inhumane conditions. Ten years later, the Mansfield Reformatory Preservation Society bought the property for one dollar with the goal of restoring the prison and opening it up for public tours and events. 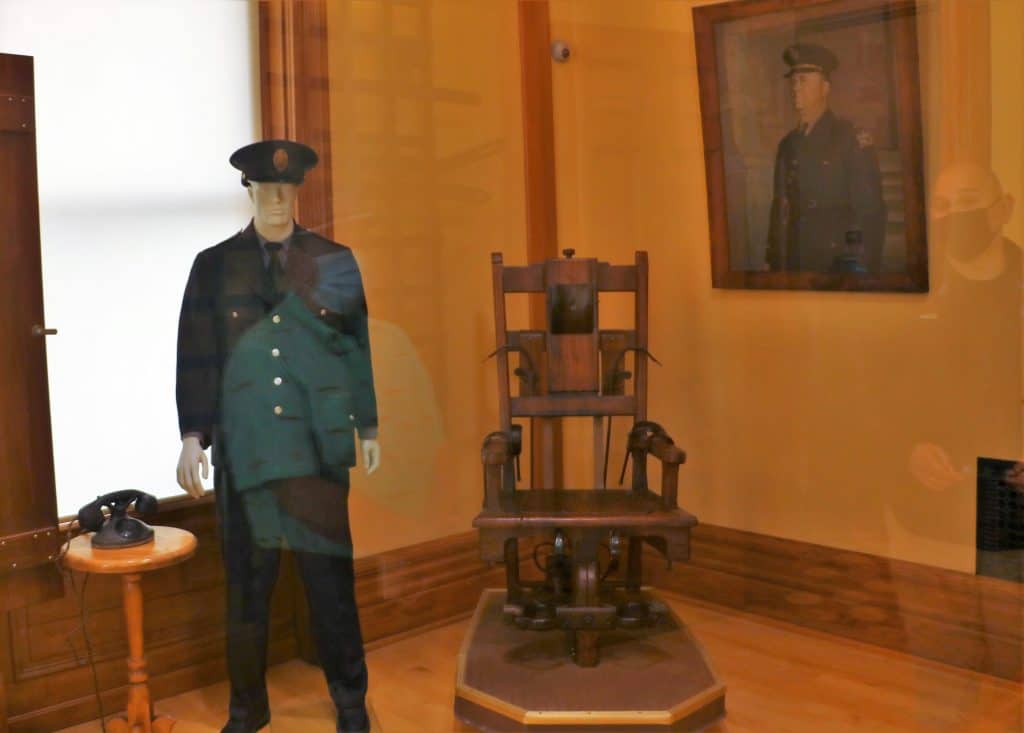 When you enter the building, you’re greeted by a stylish lobby area, but nearby the corrections museum of Ohio recreates the execution chamber, where 315 people were put to death via electrocution on “Old Sparky.” While the sentences were carried out in the now defunct Ohio Penitentiary in Columbus, the menacing chair is now displayed in the Reformatory. 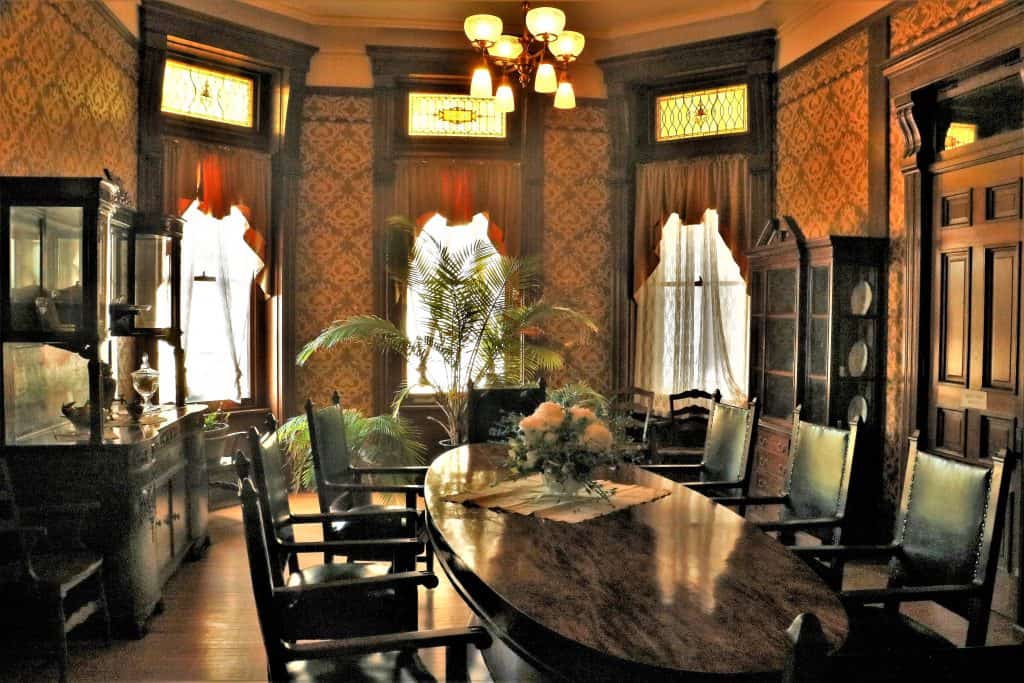 On the tour, visitors will see the administrative and residential quarters, including the warden’s newly restored  dining room, the chapel, central guard room and cell block and solitary confinement cells.

Six rooms on the second floor recreate scenes from the Shawshank film. These include Andy Dufresne’s office, the warden’s office and the pardon room. Some scenarios are brought even more to life with life size cardboard figures of the characters from the film. Props on display include the door from Andy‘s solitary cell, books from the prison library and signs from Brook‘s boarding house.

My guide, Ron Puff, who also serves as the maintenance superintendent, said that visitors who’ve seen the film but don’t know where it was filmed will sometimes tell him naively “this place really looks familiar.” Puff, despite his lackluster title, is a restoration advocate who’s also very informed about the site and its history. If you get him as a guide, consider yourself lucky.

Besides the self-guided tours, visitors can also reserve the History Meets Hollywood Tour, which focuses on the Shawshank film. The Inmate Confessions Tours are actually led by a former inmate who spent 14 months in the Reformatory in the late 1960s. For more information on the tours available, go to www.mrps.org/tours.

Because of the substantial number of deaths that took place in the OSR, the building is known for its long history of paranormal activity. As a result, OSR schedules a series of public ghost hunts, private paranormal investigations, ghost walks and ghost hunt classes.

Throughout the year, OSR also offers a Halloween and Haunters Convention, Parapsycon, a Home and Garden Show, Inkcarcerations (a tattoo and live music festival), Shawshank Hustle (a 7-K race) , Escape from Prison Blood and a Murder Mystery Theater.

For a Place to Stay 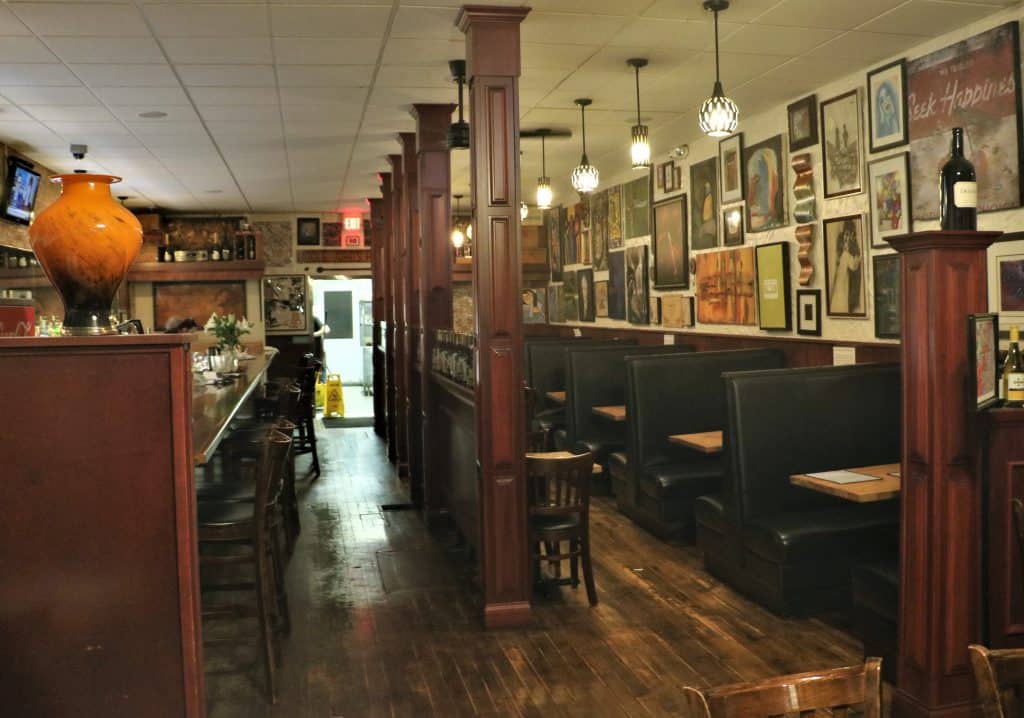 For a place to Dine, Uncle John’s Place, 18 S. Main St., Mansfield. Is a cozy, established restaurant in Downtown Mansfield. The menu features everything from starters to burgers to full dinners. Phone 419-526-9197.