In the closing months of World War II, allied forces conducted fire bombing raids on a number of German cities. Many were military or industries targets, but Dresden had none of these, just civilians including many thousands fleeing the war on the eastern front. Nevertheless, much of the city was distroyed and upwards to 150,000 people were killed (the actual number is unknown). American author Kurt Vonnegut in his book Slaughterhouse Five tells of his experience as a war prisoner in Dresden at the time. “Utter destruction” and “carnage unfathomable.” he recalls. The Germans put him and other POWs to work gathering bodies for mass burial. “But there were too many corpses to bury. So instead the Nazis sent in troops with flamethrowers. All these civilians’ remains were burned to ashes.”

Sixty seven years later, Dresden is completely restored to its former glory and is one of the most beautiful cities in Germany, perhaps all of Europe. Dresden’s opera house and concert hall, the Semperoper, was heavily damaged in the bombings. However, by 1985 it was fully restored and is today one of the finest opera houses in Europe. We were fortunate to attend a fine production of Donizetti’s The Elixir of Love here. Walking back to our hotel afterwards, we heard several talented young singers performing arias from the opera in the street. 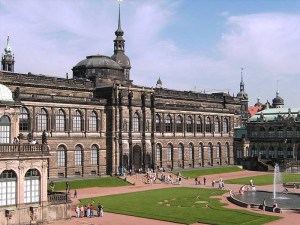 The Zwinger is a palace in Dresden built around 1216. It served as the garden, exhibition gallery and festival arena of the Dresden Court. Located on the northwestern edge of the Innere Altstadt (“inner old town”) and near other famous sights, including Dresden Palace and the Semperoper opera house. The Semper Gallery here displays more than 750 paintings from the 15th to the 18th century including major Italian Renaissance works as well as Dutch and Flemish paintings. The most famous painting in the collection is the Sistine Madona (1513-14) by the Italian Renaissance painter Rapheal. In the painting, the Madonna, holding the Christ Child and flanked by Saint Sixtus and Saint Barbara, stands on clouds while two distinctive winged cherubs rest on their elbows beneath her. Heavily marketed, today the cherubs have been featured in posters, postcards, t-shirts, and gift wrap. 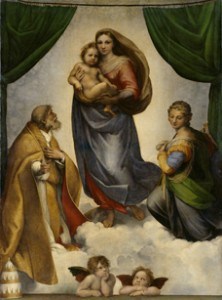 The Dresden Castle is one of the oldest buildings in the city. For almost 400 years, it was the residence of the electors (1547–1806) and kings (1806–1918) of Saxony. It is known for its different architectural styles from Baroque to Neo-Renaissance. It was heavily damaged in World War II, and restoration has taken many decades. It will be completed in 2013. Today, the Dresden Castle is a museum complex that contains the Historic and New Green Vault, the Coin Cabinet, the Collection of Prints, Drawings and Photographs and the Turkish Chamber. It also houses an art library and the management offices of the Dresden State Art Collections.

The Dresden area is well known for fine porcelain. Meissen is situated on the Elbe river northwest of the city. The world famous Meissen porcelain factory, located here, is a major tourist attraction since it has a supurb museum, a guided tour with live demonstrations by craft artists of techniques used in the production of Meissen porcelain, plus two restaurants and a large sales shop. While best known for its exquisite art peices, today Meissen also produces functional porcelain ware for the home, decorative fabrics (from Meissen designs) for home or office decor, and fabulous ceramic jewelry. Examples of all its products can be seen at the factory. 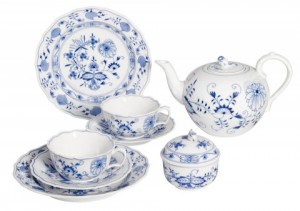 In the late 17th century Europeans were trying to duplicate the Chinese recipe for fine porcelain without success. Then in 1710, Augustus II, The Strong; Elector of Saxony and King of Poland together with a few very talented underlings discovered the secret. Since he had many freinds among the rich and famous of his day, he was able to produce and market magnificant works of art in porcelain. Meissen Porcelain continues today (despite two 20th century World Wars and 45 years of Soviet domination) to be a world leader in the production of fine porcelain. In 2010, Meissen launched its ArtCampus program which invites established mid-career artists to residencies at the Meissen factory where they produce art works using porcelain. Many of the works are exhibited at the Meissen museum. View www.meissen.com

The QF Hotel on Market Square, Dresden, was a most comfortable, ultra modern facility with great service and delicious breakfasts.