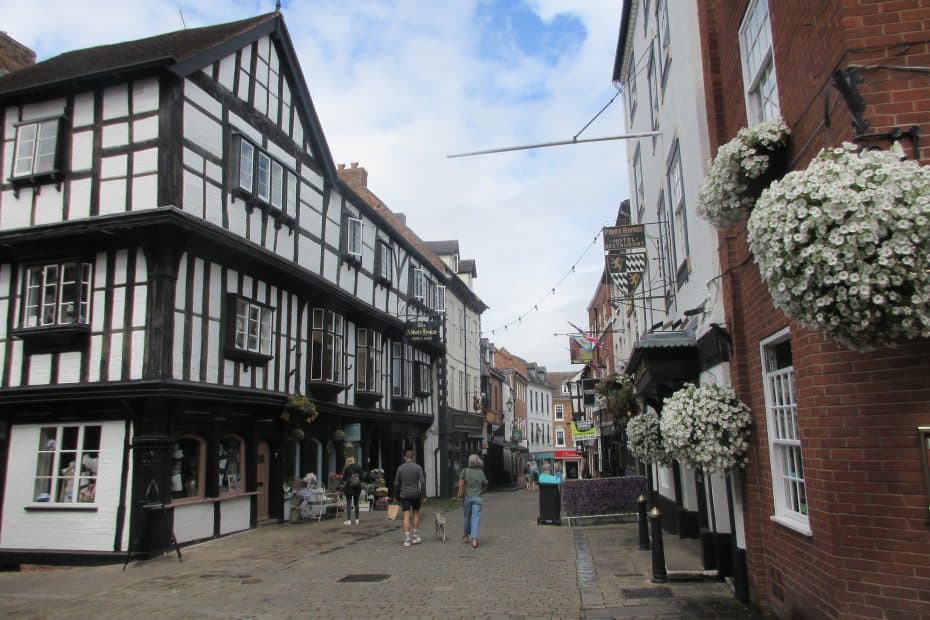 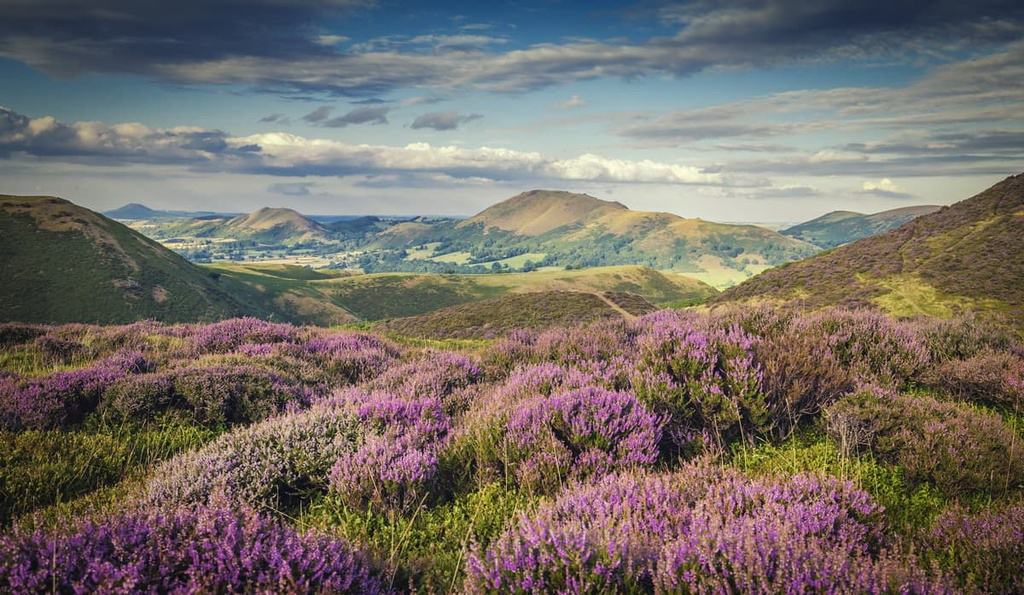 Shropshire Hills are some of the best natural landscapes in the West Midlands.

Shropshire’s picturesque countryside is dotted with stately homes, majestic estates, and idyllic farms that capture the quintessentially rural agrarian surroundings, resembling an English landscape painting. Amidst this tranquil setting one of the most impressive historic places is Shrewsbury,  which was built with a castle and abbey by Roger de Montgomery just after the Norman Conquest of 1066. The ancient structures have since been replaced by a stone castle that has been rebuilt on the original site. No wonder these medieval streets are bound to be of historic significance.

Off the High Street is the ancient passageway on Butcher Row that leads to tiny shops, half-timbered houses, and quaint pubs before reaching the secluded square where the spires of St. Alkmund’s Church rise above the town center.

Diagonally across from the square is the oldest hotel in Shrewsbury,  the Prince Rupert Hotel, which is one of the finest hotels in the area. Listed as a Grade II building, the hotel’s rooms and suites dating from the 12th century and 15th century, have been transformed through an extensive renovation program.

The property displays a rich history of Tudor and Georgian architecture and design. During the mid-17th century, Prince Rupert resided in the Mansion House, which formed part of the Prince Rupert Hotel, along with other illustrious figures of past eras. 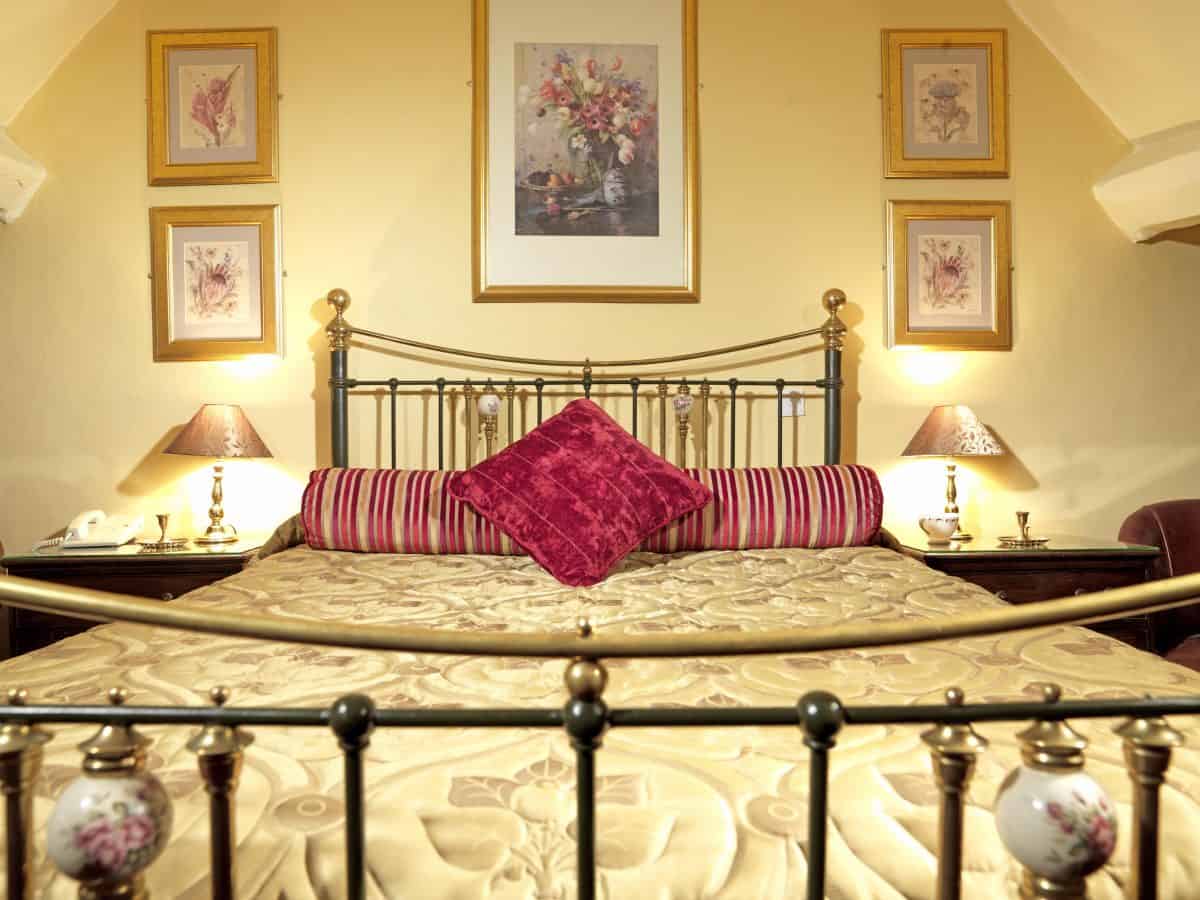 Aptly named after Prince Rupert, the Mansion House originally had a large forecourt, but was later divided into five separate houses. Now, the hotel has been extended and restored with much of its original features kept, including the stone vaulted cellar and the Jacobean staircase. 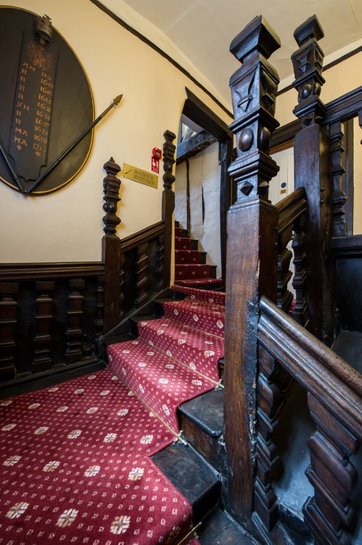 The Jacobean staircase has been restored to its original splendor.

This four-star property has been renovated to enhance the overall ambiance of the hotel. The building has been family-owned and managed since 1996 with the current owner installing modern fixtures in every room.

Especially appealing is the choice of accommodations that include modern style rooms or alternatively, period rooms and suites with beautiful four-poster beds, oak paneling, and exposed wood beams. 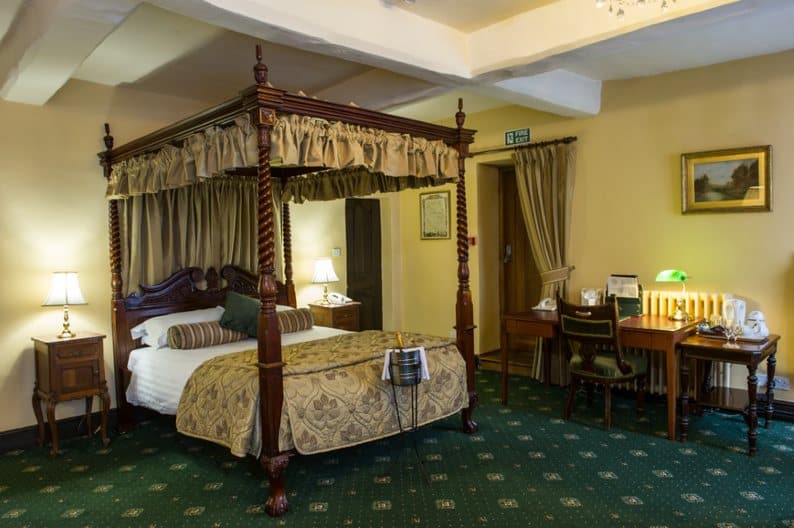 King Charles Room evokes a sense of royalty with a large four-poster bed and period furnishings.

A top feature is The Royalist Restaurant, which serves traditional English dishes that include locally sourced seasonal, fresh produce. The handsome Tudor furnishings, including the medieval suits of armor and beautiful tapestries, enhance the dining experience. 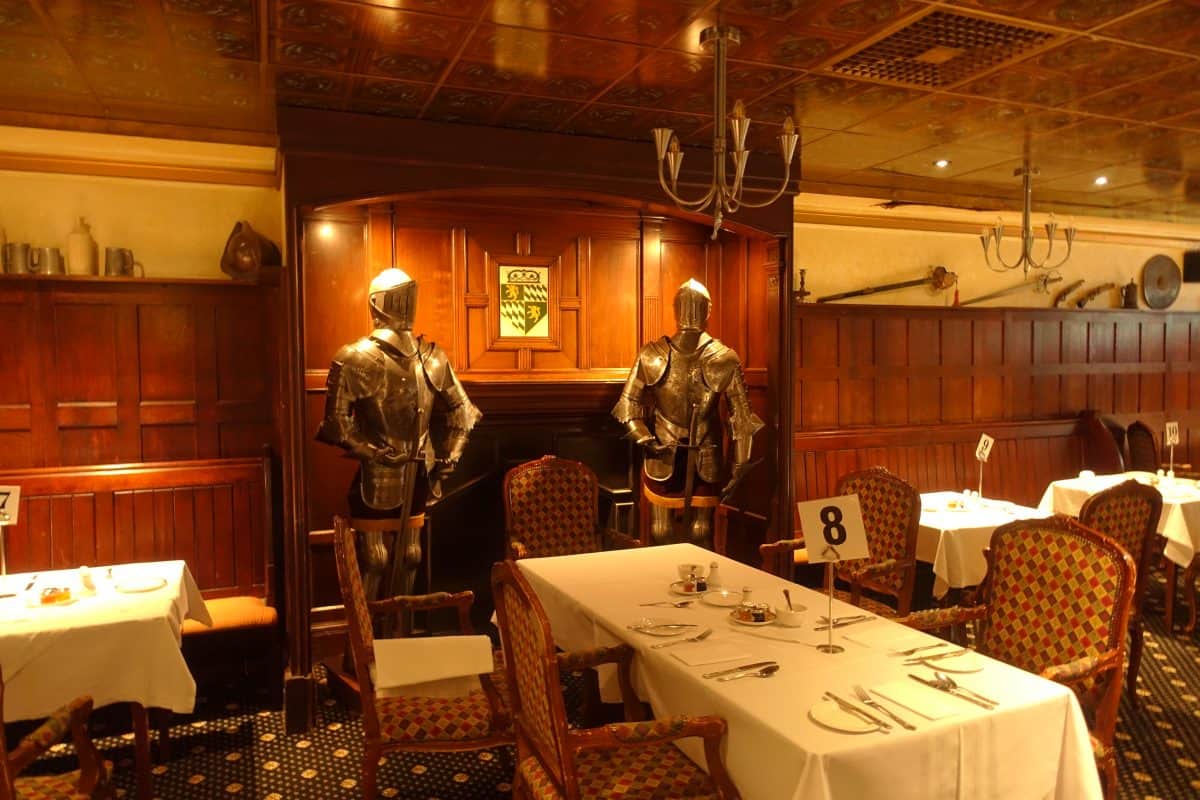 The medieval suits of armor in the dining room have a most imposing and impressive effect.

In many respects, the medieval setting makes the Prince Rupert Hotel an exceptional property that reflects an integral part of Shrewsbury’s history. This beautifully appointed, luxury hotel, which dates from the 12th century, has become a highly desirable place to stay.

The hotel’s central location in the town center provides easy access to many attractions and historical buildings. The medieval Shrewsbury Castle is just 5 minutes’ walk, and The Shrewsbury Museum and Art Gallery is less than 500 m (1,640 ft) away. 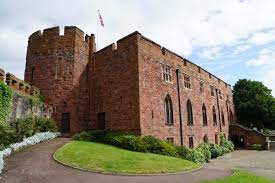 Shrewsbury Castle is a key attraction in the town center.

Shrewsbury is renowned for its cobbled medieval streets, Tudor architecture and many other historically listed buildings. The town provides a number of fascinating sites to explore the surrounding area. Among its top features are two World Heritage Sites, a Roman city, Britain’s first legally constituted Parliament, and the natural beauty of the magnificent Shropshire Hills.

Shrewsbury offers hundreds of years of history along with a vibrant, friendly atmosphere. This impressive town is a place to explore the history and traditions in Shropshire.

Locals often describe Shrewsbury as the “Gateway to Wales” since the town is ideally located on the border to Wales. All of the attractions (listed below), and more are great places to explore while using Shrewsbury as a base.

Shrewsbury Castle – The Castle displays a wide range of collections of the Shropshire Regimental Museum Trust, including military memorabilia, weapons and other equipment from the 18th century to present day.

Shrewsbury Abbey – this 11th century abbey church was founded by Roger de Montgomery and is the only substantial remain of Shrewsbury Abbey, a great medieval monastery beside the River Severn.

Quarry Park – this 29-acre park is on the western bulge of the town’s loop in the River Severn that is ideal for taking a leisurely walk from the town center.

Shrewsbury Museum and Art Gallery – The museum and art gallery feature exhibits including collections of fine art from a variety of periods and themes explored. The collections focus on examining how to see and interpret Shropshire.

Farmers’ Market – Over 30 producers offer fresh local meats, cheeses, fruit and vegetables from all over Shropshire. Open on the first Friday of the month in The Square.

Darwin Centre – Visit the Museum to learn about Darwin’s thinking on evolution.

Darwin Town Trail – Take a tour around the significant places in Shrewsbury that influenced young Darwin.

Charles Darwin Cruise – The Sabrina Boat offers this cruise with commentary about Darwin’s life in Shrewsbury.

English Bridge – This masonry arch viaduct crosses the River Severn connects the center of Shrewsbury with other areas of the town.

Attingham Park – This 18th century mansion that was built by the first Lord Berwick in1785 includes its own deer park.

River Severn scenic walks – Stroll along the beautiful circular walk around Shrewsbury, visiting the river Severn, and explore the castle grounds and the Quarry Park. Walk on the woodland trails, starting next to the train station at Shrewsbury Castle.

Shropshire Hills – Explore these natural landscapes in the West Midlands known for its outstanding natural beauty and one of England’s best-kept secrets. This protected area includes 156 named summits. The highest and the most prominent summit is Abdon Burf (540 m/ 1,771ft.). Among its top features are heathlands, commons, moorlands, and grasslands for exploring.