Home » Blog » Exploring the North Country of the Empire State

Exploring the North Country of the Empire State

Adirondack chairs at the Harren Brook Inn stare across majestic Saratoga Lake, the namesake of the mountain range that rises on the horizon. 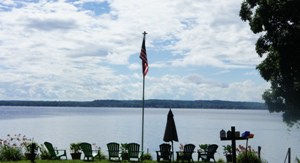 Anglers flock here each summer in pursuit of large and small mouth bass, northern pike and walleye.  But the season’s end ushers in another tradition in these parts: leaf peeping. Dotted by lakes, ponds and streams the Adirondack forests are home to towering ash, birch, red maple, oak, spruce and aspen, the last to turn colors.

The quandary: where to begin touring the vast stretches of the Empire State’s North Country?

We chose the Lakes to Locks Passage (it stretches over 200 miles) in upstate New York, where we followed the waterway that the super-powers of the 18th century — France and Great Britain — sought to control for the empire of North America.

We boarded the M/V Caldwell Belle near the village of Schuylerville for a two-hour historic narration tour along the upper Hudson River and Champlain Canal waterways. An authentic chain-driven stern-wheel riverboat, the M/V Caldwell Belle travels through locks from one crystal-clear, forest-edged lake to the next. It provides access to natural, historical, cultural and recreational sites of this historic and beautiful watercourse utilized by migratory birds and native peoples as well as famed explorers and commercial enterprises.

Next, we journeyed about 40 minutes north to Washington County where visitors time-travel back to a rural, simpler America. Rolling hills with scenic vistas appear at nearly every turn. A patchwork of farms serves up u-picks, stands and farmers markets. It is where Mom’s apple pies are made from orchard fruit, where locals bale hay and spin yarn. 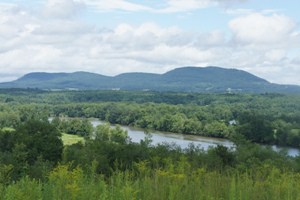 It’s snug between the tourist areas of Saratoga Springs and the Green Mountains of southern Vermont. Kids are fishing in the Batten Kill River. Placid Holsteins graze on tilted emerald hills, rustic barns in the background. This region is also celebrated as a four-season magnet for outdoor enthusiasts.

Home to America’s largest one-day Pro/Am cycling race, more than 2,500 racers compete over 62 miles of undulating terrain on both dirt and paved roads zipping through the wilderness of the Battenkill Valley. Set in early spring, the race winds its way along challenging back country roads before finishing in the scenic village of Cambridge.

It was a quiet rural community until 1855, when the Albany & Rutland Railroad connected it to Rutland, Vt. to the north and New York’s Capital District to the south. The Rice Seed Co., developed by Civil War veteran Jerome B. Rice, Sr., was a major employer and at one time was the second-largest seed company in the nation. A prisoner of war during the Civil War, Rice launched the Cambridge Fair which reportedly attracted 32,000 for the 1907 edition.

Today, the village of Cambridge lies between the towns of Cambridge and White Creek. The best known resident of White Creek was Anna Mary Moses, better known as Grandma Moses. When arthritis shut down her ability to embroider, she took up painting and became one of the country’s most famous painters in her late seventies. 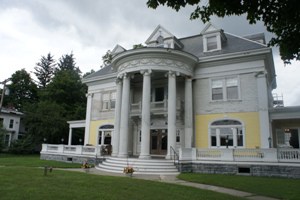 The Rutland & Washington Railroad reached Cambridge in 1851-1852. The train line was constructed to transport slate and marble from northern Washington County and Vermont to the bustling railroad centers of Troy and Albany, N. Y.

Today, the Cambridge Freight Yard is a vibrant, multipurpose campus. The once dilapidated buildings have been converted into shops, classrooms and galleries. The Freight Depot and the Beacon Feed building are now home to an expanded repertoire of visual arts, musical and dance classes, forums and events. The Lovejoy structure hosts the winter farmers market, historic exhibits and community events. A yellow brick walkway alongside perennial gardens brings the grassy park to life with color and charm.

Inside the passenger depot, the Battenkill Carousel showcases 25 hand-carved horses on which local artists have painted scenes of nearby agricultural and natural resources. The artists worked alongside master carver Gerry Holzman to celebrate the restoration of the 60-year old child-sized carousel. 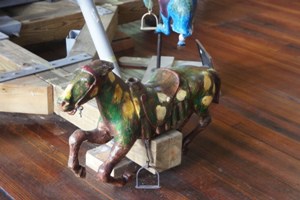 Hubbard Hall Annex, built as an opera house in 1878, is a thriving hub of cultural activity. It welcomes more than 36,000 visitors a year with dozens of weekly programs and workshops, critically-acclaimed resident theater and opera companies, as well as a popular dance and movement arts program. Next door Battenkill Books, an independent bookstore, has been an integral part of the community for 25 years.

The Round House Café offers an array of baked goods — hearth breads, cookies, muffins, and cakes as well as tasty lunch offerings — mostly organic and locally sourced – that include soups and stews, salads, and sandwiches. Breakfast options include pastries and frittatas and plenty of coffee selctions. It’s the morning hub of Cambridge life, where locals come to jaw and joke. 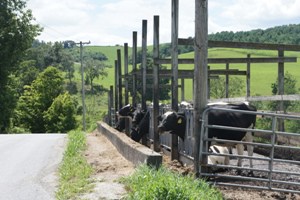 The “Girls” of Battenkill Creamery

Battenkill Creamery in Salem dates back to 1902. It was recently named the No. 1 highest quality milk in New York by Cornell University based on flavor, bacteria, butter fat, purity and shelf life. Today, the family dairy farm is home to 350 Holsteins, Jersey and Holstein-Jerseys crossbreds. Oh, don’t miss the ice cream – Battenkill churns that out, too. Made from scratch, my cone of black raspberry was splendid.

After a full day we returned to our home base at the Harren Brook Inn that is run by Keith and Eileen, a pair of former school teachers who make you feel welcomed and relaxed. The cozy inn comprises nine rooms that have been lovingly restored and expanded. Serenity is in high supply. The sitting room is full of Yankee memorabilia and that of champion racehorses such as Secretariat. We joined the innkeepers for cocktails and conversation there before heading off to Panza’s further south on the lake.

Launched as a bakery in 1897, five generations of Panza family members have been through the kitchen.  We started with the night’s special salad — mango, goat cheese, almonds and gathered greens with a delightfully light vinaigrette. We opted for the seafood cioppino– simmered clams, shrimp and calamari served over cracked pepper fettucini– and a traditional veal saltimbocca with spinach, provolone, prosciutto and sage. Our desert, a delicate pannecotta with caramelized peaches, also shined. 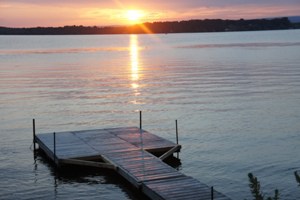 Before departing for our next morning’s adventures we savored a gourmet breakfast cooked up by Keith– superb blueberry pancakes and bacon-wrapped scallops teamed with home-baked breads and bowls of luscious fruit. Keith has also been known to send you out the door with a couple of sumptuous egg white and Canadian bacon breakfast sandwiches.

Autumn is prime time at the Harren Brook Inn. With gorgeous colors quilting the landscape, fresh-picked apples and blackberries, crisp days and the smell of woodstoves burning the first logs of the season, it brings out the best in this rambling slice of heaven known as the North Country.