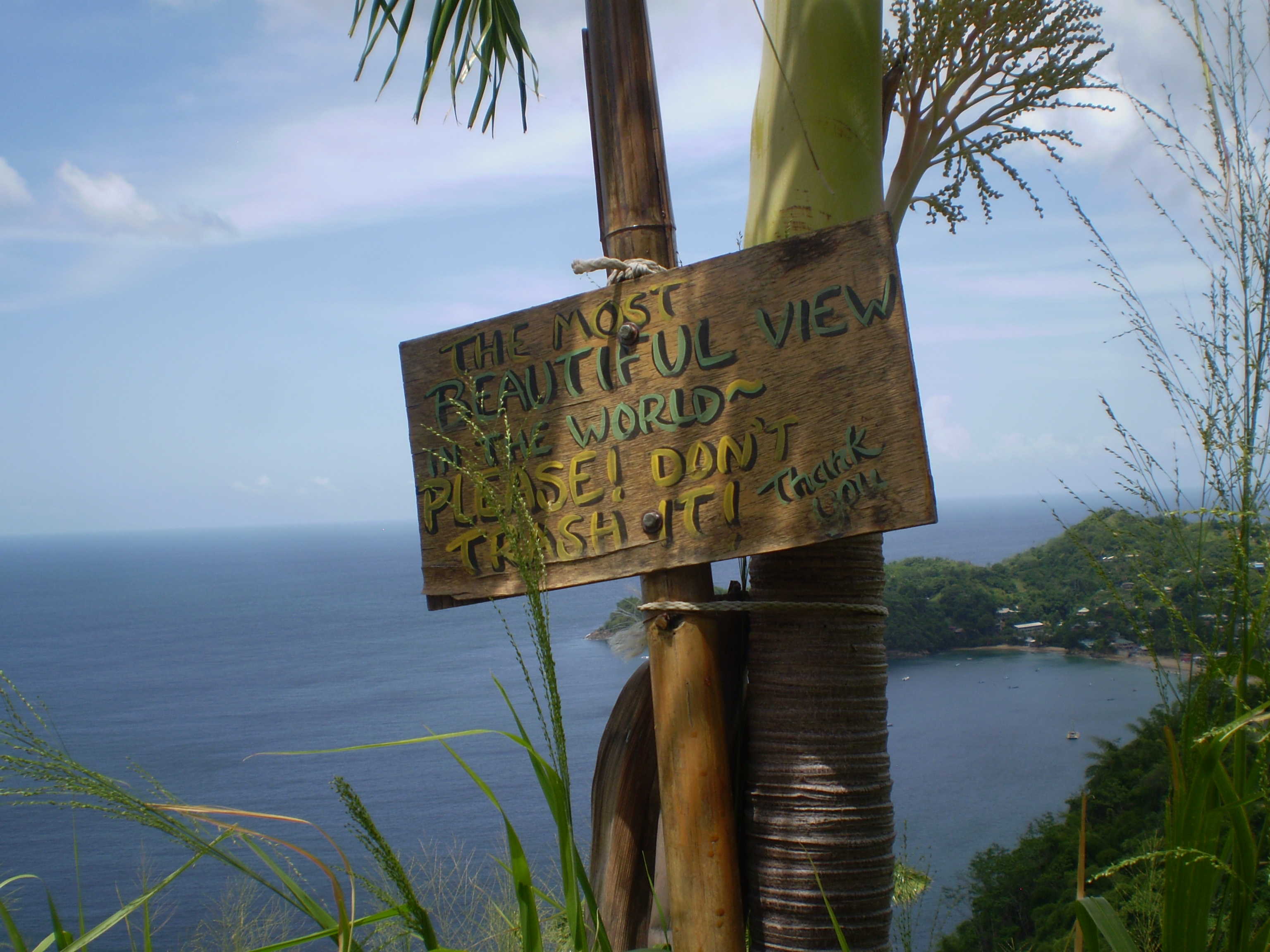 By Roland Leiser – –
Trinidad and Tobago, a two-island country off of Venezuela’s northeast coast, always fascinated me for its raucous Carnival (scheduled in Port of Spain for February 27 and 28, 2017),  its Nobel Prize-winning novelist V.S. Naipul, the hugely talented steel bands and an unusual ethnic mix. 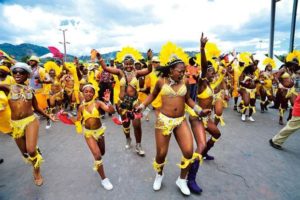 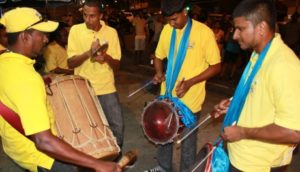 When the Society of American Travel Writers to which I belong scheduled a chapter meeting there, I looked forward to seeing a slice of this southernmost Caribbean nation of 1.3 million people.

A former British colony with Spanish and French roots, the country is also known for its beaches, especially in Tobago, scuba diving, the lush mountain scenery, ethnic and religious festivals, bird-watching, and swamp boat tours to view wildlife. Descendants of Africans make up 40% of the population, East Indians 40% with Chinese, Europeans and those of mixed ancestry account for the rest, according to the tourism office.
Some major web guides focus on Trinidad’s Maracas Bay Beach as a must-see, yet they are silent or sparse on details about a unique adventure from the beach over rough, mountain roads to the sprawling  mountain village of Paramin. Still, Wikipedia does provide insight into the village and its culture. 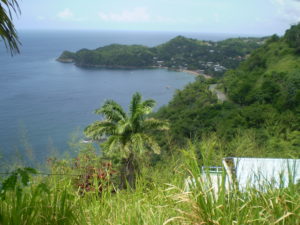 Extraordinary views from hills near Paramin Trinidad
Banwari Experience Ltd. twins the beach destination and Paramin into a single, all-day tour whose managing director Andrew Welch served as our guide.
To begin, the tour bus traveled the 14 miles from Port of Spain over the North Coast road to Maracas Bay Beach where we dined on a local specialty, Bake and Shark sandwich on fried bread. (I opted for a cheese filling for environmental and dietary reasons). 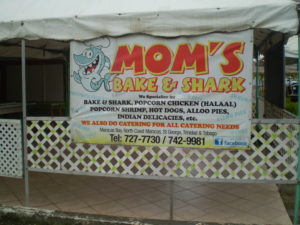 Mom’s Restaurant for Bake-Shark. Trinidad
Popular with both land and cruise passengers whose ships dock in Port of Spain, the ride to Paramin starts soon after we leave the beach area. But let the Uncommon Caribbean website explain: “No, the real reason Paramin leaves visitors at a loss for words is its roads. Its insanely narrow impossibly steep roads.” 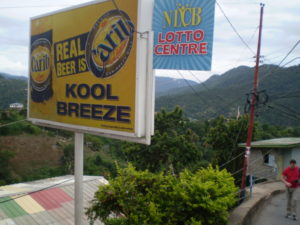 Kool Breeze, the start of our drive up to Paramin, Trinidad
To start this bone-rattling journey, we got off our bus at a tiny community to board a five-passenger Toyota Land Cruiser: four of us on bench seats in the back, the tallest passenger next to our intrepid driver, Kyle Gomez. Kyle was proud of his 1982 vehicle, affectionately named “Ginger,” and he thought he had put a million kilometers (620,000 miles) on the original engine. Even though it was late summer, the air conditioning was off to maximize engine power to climb and descend the crazy roads, but mountain breezes kept us comfortable. And Kyle did his job expertly. He seemed to know everyone on the route, waving to some locals or talking to others in his Caribbean accent often unintelligible to me. Or was it the local Patois? I’m not sure if this was an act or genuine, but who would care?
As we rounded curve after curve, I had to grab the side of the vehicle to keep from sliding into the passenger next to me. The road’s surface, in fact, resembled the early immigrants’ “scrubbing boards”  displayed at the Indian-Caribbean Museum of Trinidad & Tobago in Waterloo, a must to understand the island’s East Indian history.  As Andrew explained, the International Development Bank funded the roads and had them “scarred” to accommodate all vehicles during dry and wet seasons.  But the road was so narrow in parts that often one vehicle had to back up to let us pass from the opposite direction. 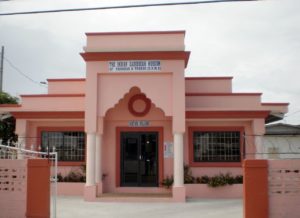 The road wound around switchbacks without guard rails as we peered down into dense foliage or steep terrain cultivated for a variety of vegetables. On these hills, farmers miraculously grew an abundance of tomatoes, cabbage, sweet peppers, eggplant and chives, which looked like large spring onions that were tied in bunches at local markets. Many of the vegetable plots in the mountain village abutted up to the edge of the highway. 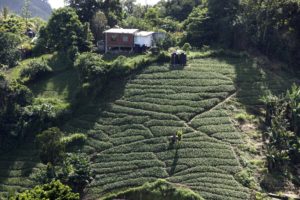 Hillside Farms of Trinidad
Simple dwellings lined the Paramin roads, but not all were kept up particularly well with an assortment of junk, trash and rusting hulks of abandoned vehicles, especially compared to the neatly-kept farms on neighboring Tobago. Frangipani with its white flowers were often seen along the roads.

Aside from that, you had to admire these farm folk who till the rich soil in what would otherwise seem impossible terrain. At the final destination, one of Trinidad’s highest points, we left the Toyota to stretch our legs, take photos, and view the robin’s egg-blue waters of the Caribbean below. Kyle found a wild guava tree and picked the fruit for us. There the group looked down at the coast with little islands in the distance and the very slight outline of Venezuela, Andrew reminded me. 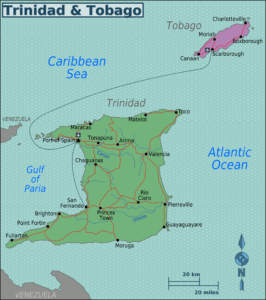 Map of Trinidad and Tobago.
Our starting and ending point of the Paramin tour was the tiny village where we sampled rum, said to be 15 years old, at the quirky Kool Breeze Bar. According to local lore, our savvy guide explained, “it’s bad luck to leave without emptying the bottle” and we didn’t, imbibing two-ounce shots mixed with ginger ale. Then we boarded the tour bus back to Port of Spain, but time in this unique mountain country just passed too quickly.
More information:
banwaricaribbean.com
discoveretnt.com
gotrinidadtobago.com
islandexperiencestt.com