Photos and Experience by Karin Leperi

This is my first time to Finland, so I admit my only preconceived notions of this Nordic country include that it’s the land of the midnight sun and they like their reindeer. I won’t experience either for I will be traveling to an area known as Lakeland for a summer opera in a medieval castle, and then a luxury stay at a National Park. 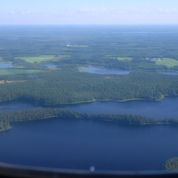 What I didn’t realize before my visit is that Finland is the land of lakes, with over 188,000 lakes, 180,000 islands, and 37 National Parks: It is the most water rich country in the world. I will be journeying through the heartland and visiting places of indescribable beauty. While the area is dear to Finns, Europeans, and Russians for cottage and spa getaways, most North Americans are in the dark about this Finnish hinterland. To shed light on the subject, I will be journeying through this heartland of waterways to experience boating, nature, saunas, Finnish cuisine, and, surprisingly, a Mozart opera in a medieval castle. A glacier-carved land of lakes, forests, saunas and spas, this is the real Finland – the “Authentic Finland” version.

I arrive mid-morning after my hour flight from Helsinki to Savonlinna and  met by my friend Tanja. “We’re off to Lomamokkila B&B for coffee,” she says. Tanja explains that cottage stays are a booming business in Finland, and the Lakeland area has the most. Lomamokkila is a rustic farmhouse oozing with charm that is close to the airport, close to the opera, yet in the middle of the lake region. Rated No. 1 on Trip Advisor, the owners speak English and ensure each person’s stay is memorable. 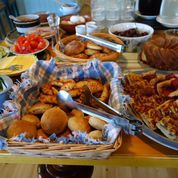 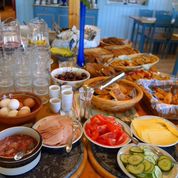 After coffee and a delicious buffet breakfast, (my favorites were the oatmeal porridge and the small cheese croissants), we journey to Punkaharju, witnessing glacial scars and ridges left by retreating glaciers from the last ice age. This iconic ridge is one of Finland’s national landscapes and is protected by a national reserve. Nearby and worth a stop is Lusto – a national forest museum focusing on Finnish forest culture in the past, present, and future. As a bonus you can discover the Finns near mystical connection with forests and nature, and their intricate world of fairy tale forest dwellers.

Few people know that the world’s largest Christian wooden church is located in Kerimäki, a small village in the southeastern part of the country. Built between 1844 and 1847, the Kerimäki Church measures 148 feet long, 138 feet wide, and 121 feet high. With over 3,000 seats inside the church, it has been estimated that it can hold upwards to 5,000 people including standing space. It is considered to be possibly the fourth or fifth church of the Evangelical Lutheran congregation, established in 1642. Though the church was designed and drafted by architect A. F. Granstedt (1800-1849), one of the most notable Finnish architects of his time, it was actually built under the direction of church-builder Axel Mangus Tolpo. His son, Theodor Tolpo took over after his father’s untimely demise, requiring all male townsfolk between the ages of 15 through 60 to take part in the construction of the building according to their income bracket. As a result, the church was finished in only three years. 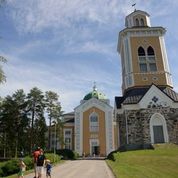 The world’s largest Christian wooden church is located in Kerimäki, a
small village in the southeastern part of the country. Built between 1844 and 1847.

According to the ground plan, it is a short armed double cruciform church and is considered to be a masterpiece of carpentry. Many have been confounded why such a large church was built in such a small town. Initially, it was thought that there was a mix-upin measurements  between meters and feet, from architect to builder. However, the original plan archived with the church shows that the dimensions are in accordance with the plan. Others have conjectured that the church was intended to accommodate half of the area’s population for religious services. Whatever the reason for the super-sized dimensions, the lack of heating in the main building restricts usage to summer months only. However, there is one major exception: Early on Christmas morning, parishioners gather in the church to light thousands of candles to provide warmth on this blessed day. Supposedly, Christmas Day is the only time men can wear a hat inside the church.

SAVONLINNA – HOME OF THE OPERA .

Then it’s off to Savonlinna, a popular spa town of about 37,000, built on a chain of islands in the heart of the lake district. This is also home to the world famous Savonlinna opera. “We have tickets,” Tanja proclaims with a smile. First is a VIP dinner cruise aboard the steam ship Paul Wahl, where we toast and dine on Finnish favorites like salmon, whitefish and arctic berries. 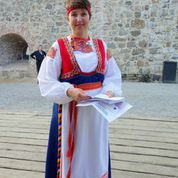 Greetings and Welcome to the Opera

Then, we arrive in time for a summer’s evening at the opera. The world famous Savonlinna opera festival is the largest opera venue in Finland. What makes it extra special is that the opera takes place in the medieval Olavinlinna castle. Built in 1475, it is known for its excellent acoustics. The castle dates back to when Sweden and Russia strengthened their borders with castles and fortifications. In the Middle Ages, Sweden controlled most of present-day Finland until the Great Northern War of 1714-1721, when Sweden lost its position of power. By 1743, the castle became a Russian border fortification. From 1855 to 1861, the castle’s military role ceased, and it served as a prison from 1855 to 1861. By the 1870’s, the castle was being transformed into a historical monument. It is the northernmost medieval castle in the world. Today, the Savonlinna Opera Festival is considered one of Finland’s finest cultural endeavors, and one that appeals to opera lovers the world over. It has grown from a one-week event into a month-long festival, celebrating Finnish opera at its best. Over 60,000 opera fans attend the annual venue, and about 10 per cent come from abroad.

Tonight we see Mozart’s The Magic Flute. This has been a flagship production since 1973,attended by at least two generations of opera fans. The opera is presented in two acts, with libretto by Emanuel Schikaneder drawing on various sources. Surrounded by a surreal, almost gothic, and yet fairytale atmosphere, I am mesmerized by the setting and the plot. And though it is sung in Finnish, it is easy to follow thanks to English subtitles. Looking around at the audience, it is clearly a favorite of young and old alike. On stage Tamino is the hero and sets off with a magic flute to help him rescue Pamina, daughter of the Queen of the Night, held prisoner by Sarastro. The Queen swears to seek revenge on Sarastro and challenges the sun with the brilliance of her song. But who is really on the side of goodness? The production is stellar and I can hardly wait for next year, when two Italian classics grace the stage. Puccini’s Tosca and Verdi’s La Traviata will be presented with their numerous popular arias. I plan to be there.

The evening is late and Tanja drives us to Jarvisydan for a night in one of their elegant log cabins. Located on the shore of Lake Saimaa – the largest lake in Finland – this is where you go for an encounter with the great outdoors. Paddling, fishing, hiking, rock climbing, sailing, and boating are some of the activities to while away lazy summer hours. However, because it is night I choose to luxuriate in my cabin sauna – occasionally swatting my back with freshly-cut birch twigs to stimulate circulation while scenting the moist steam. My log cottage is built of grand barkless pine and is close to a birch grove, the lakeshore and the restaurant. With two bedrooms, sauna, a Jacuzzi, and two bathrooms, cabin villas can accommodate up to six people. (There is also a steam cave, outdoor hot tub and two wood-heated saunas by the lakeshore.) Next morning, I walk to the centrally located rustic restaurant, inside a building brimming with local culture, history and artifacts. The Medieval Restaurant Piikatytto capitalizes on Savonian flavors of the 17th century, where fresh ingredients and genuine hospitality are part of the meal. Dishes are served on wood chips, in pottery bowls and on sizzling iron pans. The glow of an open hearth fire and candles illuminate evening meals. I am welcomed at breakfast as if I were part of an extended family. While I partake in a buffet featuring a variety of breakfast dishes as well as the luscious local berries, I learn that the history of Jarvisydan dates back to 1658. This magical  place amongst the virgin forests and lakes provides service in Finnish, English, Russian and German. After a boat cruise looking for wildlife and the critically endangered Saimaa ringed seal – world’s most endangered ringed seal inhabiting Finland’s Lake Saimaa – we then head to the Mikkeli region for more Lakeland fun.