Story and Photos by Reed Hellman

Even city-bound, high-rise urbanites know Yellowstone as the American wilderness. Started as an elitist game reserve, Yellowstone has become a national icon and a paradoxical blend of maximum accessibility and majestic isolation. Yellowstone is America’s–and the world’s–first national park. Established in 1872 to preserve unique geothermal anomalies and dwindling wildlife, the park was accessible only to “swells” with the money to hire guides and outfitting for extended horseback or hiking expeditions. Road building began in 1878 to accommodate horse-drawn stages carrying growing numbers of well-heeled tourists. The first automobile clattered its way through the spruce forests in 1915, opening Yellowstone’s spectacles to the eagerly waiting American–and international–public. This year, some 4 million people visited a landscape that is as it was before Lewis and Clark. Many visitors simply drive the Grand Tour for a day or two of front country sightseeing. In the midst of some of Nature’s most remarkable handiwork, most people rarely venture more than a quarter-mile away from the road. The 1 percent willing to extend their horizons can savor, often entirely by themselves, the most remote and pristine landscape in the continental United States. 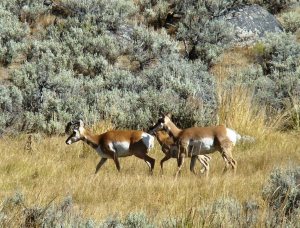 The bulk of Yellowstone’s 2.2 million acres is a high plateau surrounded by 10,000 to 13,000 foot mountains. The park’s center–the now infamous caldera—is a 30 by 45 mile wide crater of a volcano that blew out many thousand years ago. Potentially overdue for another blow out, a subterranean “hot spot” drives the famous geysers and the world’s largest and most active collection of superheated geysers, vents, hot springs, mud pots, and fumaroles spouting, bubbling, sizzling, or flowing in brilliant colors through basins clouded with dragon-like vapors.

The park’s wildlife—viewed in their natural habitats, at close range, without intervening bars or cages–is equally exceptional. Both the Lamar and Hayden Valleys, rightfully called “American’s Serengeti”, give homes to free ranging bison, elk, moose, pronghorn antelope, bears, wolves, and dozens of other varieties of animals and birds. Some bison herds crowd so close to the road that gawking motorists, stuck in extended “buffalo jams”, can hear the animals’ bellies rumbling as they forage. Many park users see Yellowstone as 200 miles long and 30 feet wide. Generations of sightseers delighted in touring the park roads connecting so many of the iconic splendors. Mammoth Hot Springs, the Grand Canyon of the Yellowstone, Norris Geyser Basin, Fountain Paint Pots, Fishing Bridge, and the ubiquitous Old Faithful Geyser have become drive-in attractions. Across the open plaza from the geyser, the Old Faithful Inn stands as the world’s largest log building. The central structure features an 85-foot tall lobby, huge rough stone fireplace, overhanging balconies, and railings made of spectacular twisted gnarled logs. A night at the Inn can include the sight of the geyser firing silver-white under a full, howling wolf moon.

Another Yellowstone “must-do”: Enjoy spinning-out stories about the day’s exploits while sipping a late afternoon “Indian Paintbrush” at the Inn’s Bear Pit Bar. The National Park’s information centers at Old Faithful also offer invaluable information about opportunities to visit the backcountry. Traveling any distance off of the road requires proper equipment and behavior. The Park Service publishes their rules and common sense recommendations for backcountry travel in Yellowstone Today, the park’s official newspaper. The paper also carries a park map and information on safety, travel logistics, campgrounds, fishing, wildlife, hiking, and the park’s major attractions. A relatively easy day hike out across the Lamar River Valley, in the park’s remote northeast corner, opens an unforgettable adventure beyond the parking lots and scenic pull-offs. Follow the Specimen Ridge Trail, keeping solitary Soda Butte behind your left shoulder. The road and traffic noises quickly fade. Walking the nearly level open prairie is thrilling for people used to crowded urban confines or shadowed forests. The vast plain runs into the hazy distance. The open aspect and expansive vistas sweeping to the far-off, snow-frosted mountains give a feeling of absolute freedom. The trail wanders for two miles across the level valley floor down to the river, passing numerous buffalo wallows–depressions worn in the red-gray sand by the shaggy giants rolling to scratch their backs and flanks. Dusty-green sagebrush and clumps of tall, yellowed grasses patch the ground, and only the wind and the ravens break the silence.

Silence and solitude are rare commodities at Mammoth Hot Springs, the park’s northern entrepot and administrative center. Two of the park’s main roads meet within sight of the famous thermal springs and steaming, white terraces. Park headquarters and organizational buildings, staff residences, a clinic, post office, courthouse, store, gas station, and the Mammoth Hot Springs Hotel complex sprawl next to a large, open lawn that once served as a US Cavalry parade ground. In the autumn, Big Bob, a boss bull, commandeers the parade ground and bugles his rampant, rusty-hinge squeal at his harem of three dozen cows.

At Mammoth, the backcountry and front country mingle in a bizarre ballet. Cars, grumbling big trucks, recreational vehicles, and noisily gabbling legions of tourists maneuver around Big Bob as he chases his potential mates and spars with rival bulls on the parade grounds and boulevard medians. Park rangers scramble to keep the crowds clear of the massive animals. Traffic swiftly backs up in three directions and hotel guests gingerly tiptoe past cows and yearling calves resting unconcernedly on manicured lawns made wildly green by liberal application of elk patties. In the Mammoth Grill, burger-and-hotdog-toting patrons, craning their necks for a better view, jockey for tables next to the front windows. Unaware of the gawking, pointing human audience, two bulls on the median use their spreading, twelve-point antlers to shove and jostle for ownership of the placid cows. Finally, with a single snorting heave, Big Bob throws his contender back onto the macadam street. The contender loses his footing on the pavement and slams into a hastily parked minivan. The fight is over. The crowd quickly disperses and Big Bob, panting and with one damaged ear hanging askew, goes back to bugling and corralling his fickle harem until the next contender comes along. While Mammoth and Old Faithful may be iconic, visiting Lone Star Geyser epitomizes Yellowstone-beyond-the-windshield. A few miles south of Old Faithful, Lone Star spouts its 40-foot plume in near seclusion. An old black-topped road–restricted now to walkers and bikers–follows the bank of the Firehole River 2.5 miles to Lone Star’s basin. Don’t look for crowded bleachers, interpretive rangers, or concessionaires ringing the geyser’s cone. However, every 3 hours or so, Lone Star rips off a steaming, roaring Venturi eruption, all the more impressive because geyser-gazers can approach as close as prudence allows. 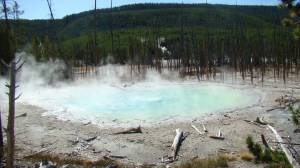 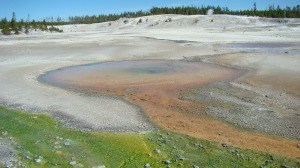 Lone Star’s paved path makes a superb destination for people with restricted mobility who want to get beyond the pull-offs and scenic viewpoints. On the surrounding hills, steam rising above the trees pinpoints several other geothermal vents. Elk, deer, and buffalo frequent Lone Star’s natural arena, and the nearby Firehole River holds classic fly-fishing. With an easy walk from the trailhead parking lot, this relatively uninhabited slice of Yellowstone offers all of the Park’s signature essentials. That paved, gently graded 2.5 miles is just far enough to put Lone Star–and figuratively most of Yellowstone–beyond the reach of the motorized multitude content to experience Yellowstone National Park from the right hand lane of the Grand Loop Road.

For Further Information: Yellowstone National Park, WY 82190, or call 307-344-7381. Find their Internet home page at: http//www.nps.gov/yell.   Reed Hellman is a professional writer living in Alberton, Maryland. Visit his Website at www.reedhellmanwordsmith.com, or e-mail your questions and comments to RHWay2Go@yahoo.com. 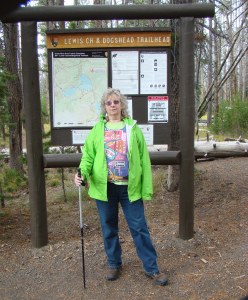