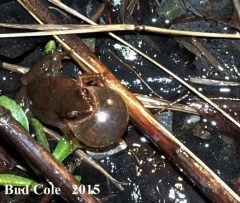 There are many natural signs and sounds that announce the arrival of spring, even when winter weather attempts to hang on well beyond the vernal equinox, the first day of spring. Although there are equal hours of daylight and darkness, many spring plants and animals delay their normal appearance.

There is one harbinger of spring, however, that never is concerned about cold weather or late snowfalls. It produces antifreeze that protects it from the cold, but most people have neither had the opportunity to observe this tiny elusive amphibian, nor would they be able to identify it if they found one.

These small tree frogs known as peepers are covered by colors that blend in with their habitat and are very difficult to find even when people search for them. It is known to most of us only by its sound and is familiar to millions of people across the eastern and central United States.

Its voice is well known as one of the first signs of spring, and while the spring peeper is slightly more than one inch in length it has a powerful call. During the spring these frogs gather in large groups and form a chorus calling back and forth as the sun begins to set.

Like most frogs, spring peepers produce calls by moving air across a series of vocal cords by first filling their lungs with air and then closing the opening to the mouth and nostrils. Air is then pushed forward inflating a vocal sac, or pouch, and as the air moves back and forth between the lungs and the balloon-like structure the continuous air flow over the vocal cords produces their distinctive call.

Peepers have a call that is a series of sharp, shrill bird-like peeps of a single clear note usually lasting about three seconds. They repeat the call at intervals of about one second, and calls are unique to only members within the same species to eliminate the possibility of females breeding with males of another species.

Shortly after emerging from their winter hibernation the males begin calling to the females as peepers usually breed in temporary areas of water called vernal pools. These temporary pools hold water for two months or more and are important habitats to many different animal species, as they provide a safe haven for breeding amphibians because there are no fish in the pools to eat eggs and tadpoles.

This chemical serves as natural antifreeze for the frogs by preventing its cells from freezing during very cold conditions. Production of glycerol allows these freeze-tolerant frogs to survive subfreezing nights and extended cold periods that might occur after they emerge from hibernation.

If it is too warm they move to a cooler spot, move back and forth between shaded and sunny areas or into and out of water. This allows them to continually adjust their temperature.

When fall temperatures begin to drop, peepers taper off their activity level to the point where they stop eating. Before their heart and respiration functions drop to hibernation levels, they dig down below the eventual frost line to await warmer temperatures in late winter or early spring — returning to the surface when conditions become favorable.

When searching for spring peepers, the best method is to follow their calls and look for the distinctive “X” on their back. They are not easy to find, as their colors vary from shades of yellow, brown, gray and olive, and before long they will become silent for another year.