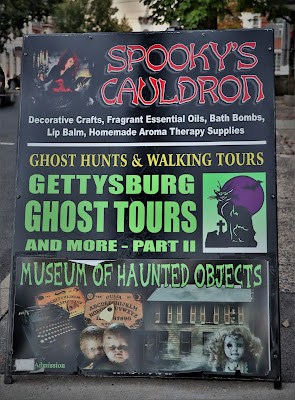 Looking for a destination that might close out the summer and segue into a Halloween frame of mind, I checked out online spooky spots like Salem, Mass., the Lizzy Borden House in Fall River, Mass. and the Day of the Dead in Oaxaca, Mexico. Short on time and wanting something close to home, I zeroed in on Gettysburg, almost as famous for its ghost tours as its renowned battlefield.

Over the course of three days in July of 1863 around 72,000 Confederates clashed with close to 94,000 Union soldiers resulting in nearly 51,000 killed, wounded or captured. All this carnage has led to the contemporary belief that Gettysburg is rife with spectral activity. In fact, the Travel Channel proclaimed some sites to be the nation’s “most haunted” while Gettysburg has made the Discovery Channel’s  “10 Most Haunted List.”

At the moment, six different companies offer two dozen or more themed ghost tours and, for those with a curious bent, some even offer private paranormal investigations. During the course of a two-day visit, I managed to squeeze in four guided and candlelit tours. Here’s a photographic glimpse of what I experienced along with some photos of other area attractions.

During my two day stay in Gettysburg, I managed to sign on to 4 different tours, all led by guides in period costumes and carrying candle lit lanterns. The tours run year-round and last anywhere from an hour to 90 minutes and go over fairly even terrain on city streets with some easy uphill inclines.

Held in the evening after sunset, the tours have an ominous, eerie feel. Surprisingly, tour takers also get a primer on the battle as well as ghost and paranormal stories as the guides include related information about the battle in their narrative.

The guides are master storytellers who mentioned ghostly apparitions in some of the building windows, strange, unexplained odors like cigar smoke and perfume, cries and voices, even horse neighing and cannonball bursts. A couple pointed out the shadow of Abe Lincoln cast on the outside corner of the 1776 Dobbins House.

Ghost Tours of Gettysburg schedules 20 different routes, some of which are offered only occasionally, some every day. One of them titled “Black Cat” takes you off the streets into a darkened park-like area and ends at the Ruff House, where the former owner experienced the battle up close and personal. Witnesses have reported numerous ghost-like apparitions and other paranormal events on the house’s porch and interior.

Ghostly Images of Gettysburg is the only company that takes you inside the house where the only civilian casualty of the battle died. The tour includes all the rooms in the authentically furnished house including the mirrors which often reflect paranormal events. Inside the house, visitors can see the spot where a bullet hit and immediately killed Jennie Wade, who had been kneading bread at the time.

The kitchen door through which the bullet passed is the subject of an old legend that has it that any unmarried woman who put her ring finger in the hole will receive a proposal within the year. The house is also been known for doors opening and closing without cause, unexplained footsteps and someone or something pulling the hair of visitors.

One of the most gruesome sights takes place in the basement where a mannequin lying on a cot is meant to represent the slain young Jennie.

Other Area Attractions
Venture out into the countryside to see some of Pennsylvania’s lush farmland and impressive fruit belt, a massive wooden round barn built in 1914 that holds a produce and local product market and the Thirsty Farmer brewery and cidery, where you can try the Apple Graff, a unique blend of cider and beer.

A truly amazing experience can also be had at Mister Ed’s Elephant Museum and Candy Emporium, home to 12,000 elephant figurines now on display in all shapes sizes and colors, including 5 life size pachyderms on the beautifully landscaped property.

The grounds outside are beautifully landscaped.

The second component of the site showcases 2,000 different kinds of candy, including as many as 36 flavors of fudge. www.mistereds.com.

Gettysburg has many restaurants and eateries. Here are a few suggestions:

Named after native son and pitching great, Edward S. Plank (1875-1926),  the restaurant has something for everyone from burgers to a full dinner menu. Be sure to check out the Plank memorabilia highlighting the career of the first southpaw to win 300 games and the MVP of the 1913 World Series who out dueled Christy Mathewson in the 5th and final game.

Besides its array of authentic Irish fare made with many of the owners’ family recipes and ingredients imported from Ireland, the Garryowen Irish Pub and Restaurant  stocks 120 plus Irish whiskies and the best of Irish drafts including Guinness.

For a Place to Stay, the 1797 Gettysburg Hotel, 1 Lincoln Square, is in the center of town and across the street from the house where Lincoln spent the night before delivering his Gettysburg Address. Phone 866-EST-1776 or www.hotelgettysburg.com.

For more information on Gettysburg, phone 717-334-6274 or www.destinationgettysburg.com.