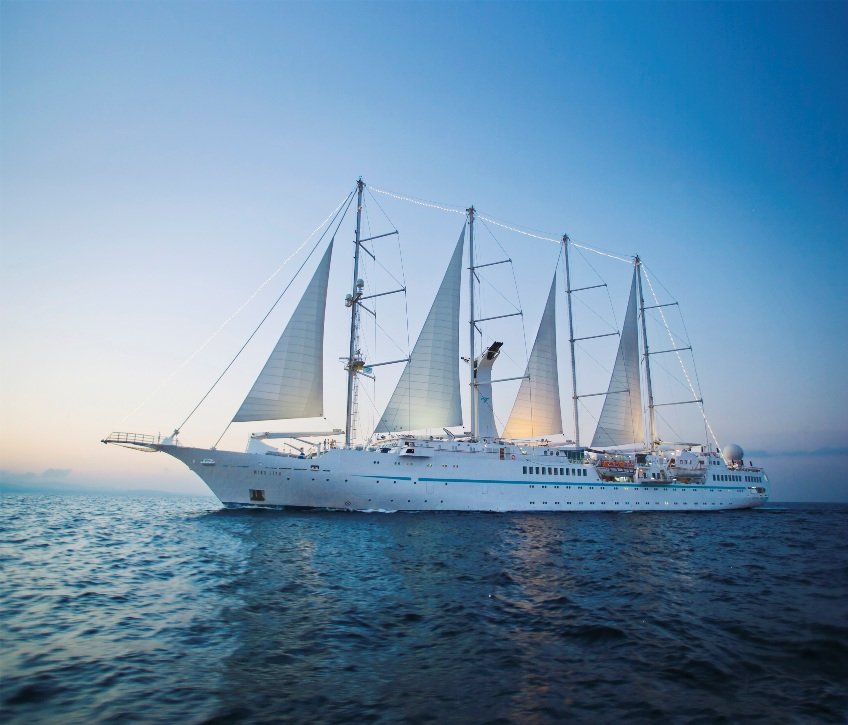 The Greek Isles and Turkey is a voyage that is best experienced on a sailing ship. I had visited the Greek Islands and Turkey before, but never on a yacht with sails. This was also my first experience on Wind Star, a 148 passenger, four deck vessel with six self-furling, bridge-operated sails. It seemed as if the sea and the ports were custom made for this smaller ship allowing passengers to fully experience the areas just as they were centuries ago.

In most of the ports, the Wind Star was the only ship in port allowing passengers to enjoy the islands without the crowds created by thousands of cruise ship passengers.

The voyage began in Istanbul and I opted for a private tour of the city as my time was limited and I wanted to make the most of every minute. What a wonderful sight it was to see Yusuf Bardavid of Milk and Honey Tours, waiting for me and my daughter at the airport with a sign in his hand welcoming us. He took our luggage to a van and off we went for a whirlwind tour of the city.

In just five hours we managed to tour the Blue Mosque, Hagia Sophia Museum, see pottery made by a local artesian, visit a carpet factory and shop at the Grand Bazaar. Our guide was efficient, helpful and made our day in Istanbul stress-free. He also transported us to our ship docked at Karakoy right on time for departure. 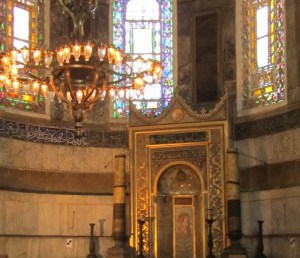 Checking in on Wind Star was a simple process with just 130 passengers, there was not much of a wait and we were guided by a steward to our stateroom which was prepared for our arrival with bottles of water, fresh fruit and a bouquet of red roses, my favorite flower.

Sailing away from Istanbul with the sails unfurling, the call to prayer from a nearby mosque and music from the 1992 movie about Christopher Columbus, 1492: Conquest of Paradise, was an awesome experience. It seemed to me that this spectacular sail away experience was something that a small ship that sails the Aegean Sea on a regular basis plans for its passengers. 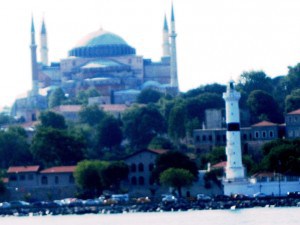 The first day on Windstar was at sea giving passengers a little rest and relaxation from a day of traveling. We selected a book from the library and spent the day on deck, reading, lounging, taking a dip in the swimming pool and whirlpool and meeting fellow passengers. There were no bingo games, art auctions or parades. The ship has a small casino, but most passengers preferred to enjoy the on deck upscale experience of the yacht. Some also opted for a spa treatment, while other guests enjoyed a yoga class. On deck, attentive waiters brought passengers their favorite beverages, put up umbrellas and made guests feel at home in their new environment. With 148 passengers and 90 crew members, the service was exceptional. In the evening we dined in the elegant restaurant with its comfy booths and tables. The dress code was casual elegance. No need to bring formal wear on Windstar. 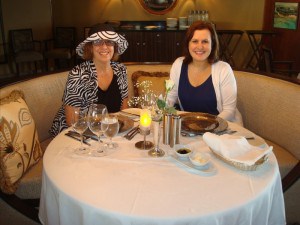 Phyllis and Debbie in the main dining room.

The ship offered group and private tours at the ports visited for an additional cost. The activity level of the tours on the ship varied from easy to moderate and high, allowing guests to experience the areas at their own pace.

Kusadasi was our first port of call. Here, we wandered through the cobblestone streets Ephesus, one of the greatest outdoor museums in Turkey. The ruins of ancient city include a theater dating back to the Hellenistic period. During the first century A.D. it was reconstructed and expanded by the Romans with a seating capacity of 25,000. The ruins also include an impressive Corinthian-style Celsus Library and Hadrian Temple. 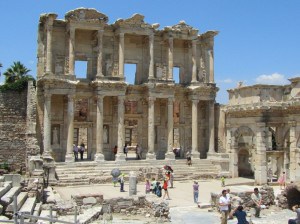 Sailing next into Rhodes was like stepping back in time. The walled city surrounding the port was built in the 14th century by the Knights of St. John to protect the city from its enemies.  The island has an Old City with cobblestone streets and the Palace of the Grand Masters, an archeological museum and ancient churches. The city also has the country’s oldest synagogue, Kahal Shalom, built in 1577. The synagogue also has a museum that tells the story of Rhodian Jews. Rhodes also has a new city which boasts beautiful resorts on the sea, designer shops and modern buildings. 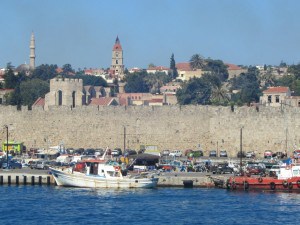 The Turkish port of Bodrum which boasts an International Marina was our next port of call. Tours included a visit to Bodrum Castle, built by the Crusaders in the 15th century. The area is also famous for its gullet cruises for cruise passengers visiting the port. A gullet is a wooden sailing boat for two, equipped with a restroom and sunbathing area. Passengers on this tour wore their swimsuits and dived in the water for a swim from the gullet boat.

My daughter and I opted for a walk around the ancient city with knowledgable tour guide, Sukin Gozutok, who helped us navigate the narrow streets, visiting places of interest, such as a leather shoe shop where a craftsman was making sandals, by cutting pieces of leather and designing them into beautifully crafted shoes. We also had lunch at a local Greek taverna and took a tour onboard a yacht moored in the marina. 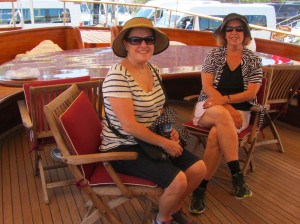 Debbie and Phyllis on a yacht in the marina.

When we arrived back to the ship the Watersports Platform on deck 2 was open and we enjoyed kayaking around in the deep blue waters of Bodrum. The complimentary water sports toys for passengers also included mats for lounging in the sea, snorkeling and scuba diving equipment. The sports platform is open for guests, weather permitting at the various ports. 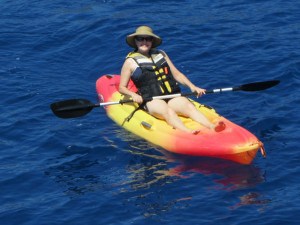 In the evening we enjoyed a dinner on the pool deck at Candles. Here, we watched the sunset as we feasted on a variety of grilled entrees. Later in the evening a Turkish dance troop entertained in the ship’s lounge.

Sailing on to Santorini, Greece, the spectacular sight from the sea is unforgettable. The stark white-washed buildings scattered along the cliff top blue and white village stretches out from black volcanic sands. This lovely landscape is the place for a perfect picture and many paintings of the area are for purchase at area gift shops.

Our ship tour included a bus ride to the top of the mountain. We explored the city on our own and took a cable car back down to the port. Some adventurous people rode a donkey up to the hill top city. 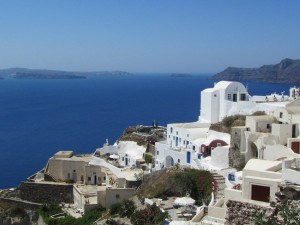 The beautiful backdrop of Santorini was not overlooked by the master of the Windstar yacht. A bountiful buffet was scheduled for the evening while the ship was still in port. Greek favorites from spanakopita and souvlaki to plaki and mousaka were served on the pool deck along with grilled lobster and lamb chops and a dessert table featuring a chocolate fountain and acres of delicious sweets. Following the festive meal, the crew performed for guests with music and dancing for all until the wee hours of the morning. 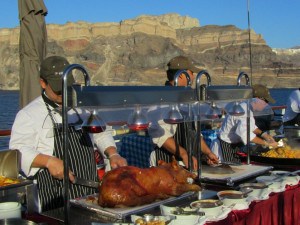 The island of Mykonos, Greece with its native fisherman and brisk blowing winds was our next port stop. This UNESCO World Heritage site with its cobblestone streets, unique shops and Greek tavernas is a pleasant way to spend a day, recover from the previous evening’s festivities and do some souvenir shopping.

The seven-night cruise came to an end all too fast and we were docked in Athens, where we opted to stay an extra day at the Athens Hilton, an excellent choice, because of its prime location, close to the city centre and 25 minutes from the airport. Our room was stylish and contemporary and we enjoyed the opportunity to lounge at the beautiful outdoor swimming pool. The hotel also has an indoor pool, four restaurants and two bars. We took the elevator up to the rooftop bar where we had a magnificent view of the acropolis. We also had a view of the acropolis from our room. 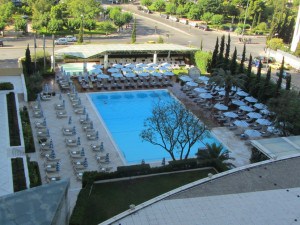 Pool at the Hilton.

Opting again for a tour guide, we saw Athens with local guide and historian, Helen Premeti, a graduate of history and archeology at the University of Athens. Premeti gave us an  informative tour of the Acropolis Museum completed in 2007 just south of the Acropolis. The museum contains the antiquities of the rock and its slopes dating back to the 5th century BC.

Premeti escorted us through the Old City of Athens and we lunched at Diogenes, a Greek taverna.

In the evening, we ventured to the Old City for dinner. Fisherman’s Taverna Restaurant was recommended to us and we experienced an appetizing and delicious meal at this local landmark. The restaurant has many outdoor tables on different levels and was a pleasant and picturesque place to end our evening in Athens. 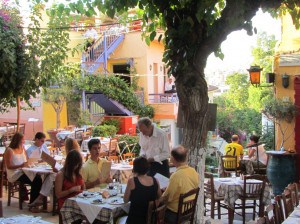 The buffet brunch at the Hilton Athens was yet another highlight of the trip. It was more lunch than brunch with an eclectic assortment of cuisines from Asian and American to Greek and Turkish. There were eggs, fish, yogurts, fruits, veggies, meats, acres of breads and rolls and along with a huge assortment of desserts, there were two kinds of halavah, one of our favorite desserts.