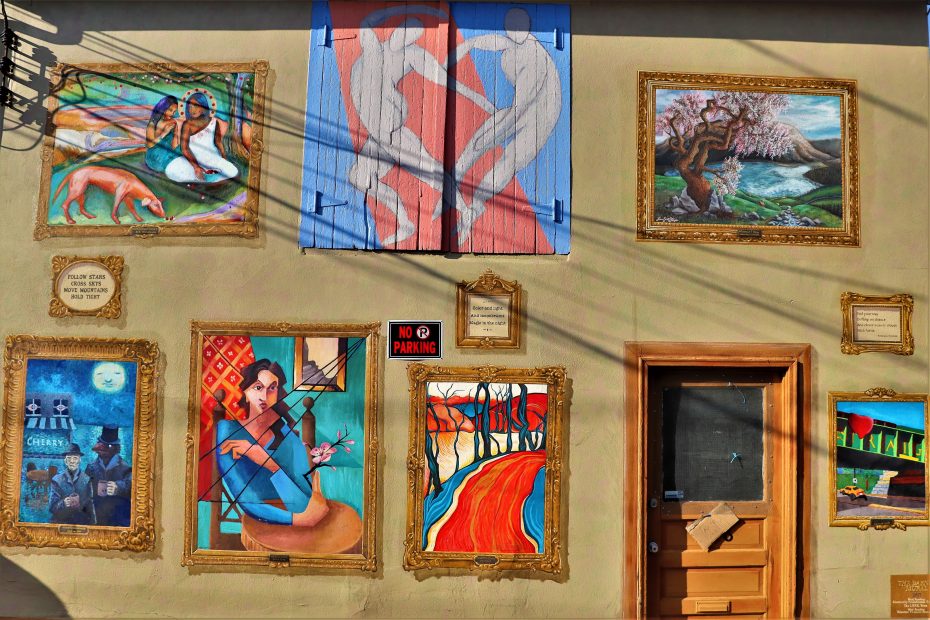 My morning hike to the top of Hawk Mountain at the beginning of October was a pleasant one. Clear, sunny skies, mild temperatures, and the promise of seeing eagles, hawks, and other birds-of-prey flying by made the climb enjoyable. Fall foliage just beginning to turn in beautiful Berks County, Pa., made the trek even nicer.

Making my way uphill to the North Lookout, I found several birders eagerly looking skyward for sightings. One of them, Dan Knarr of New Ringgold, Pa., has been a birder since age 16. In the 1970s, he served as a bird spotter, one of the volunteers who keep records of passing raptors.

Why even bother to count you might ask. The answer is that raptors are at the top of the food chain and give biologists a good idea of how healthy some of the world’s ecosystems are faring. It’s also a way to estimate the population of the normally reclusive birds.

Another spotter, Jason Deeter proved an early bird riser. He started his count at 6:45 in the morning and, by noon, had already recorded in his log one black vulture, 26 sharp-shinned hawks, 1 cooper’s hawk, 29 red-tail hawks, and 2 broad-winged hawks. 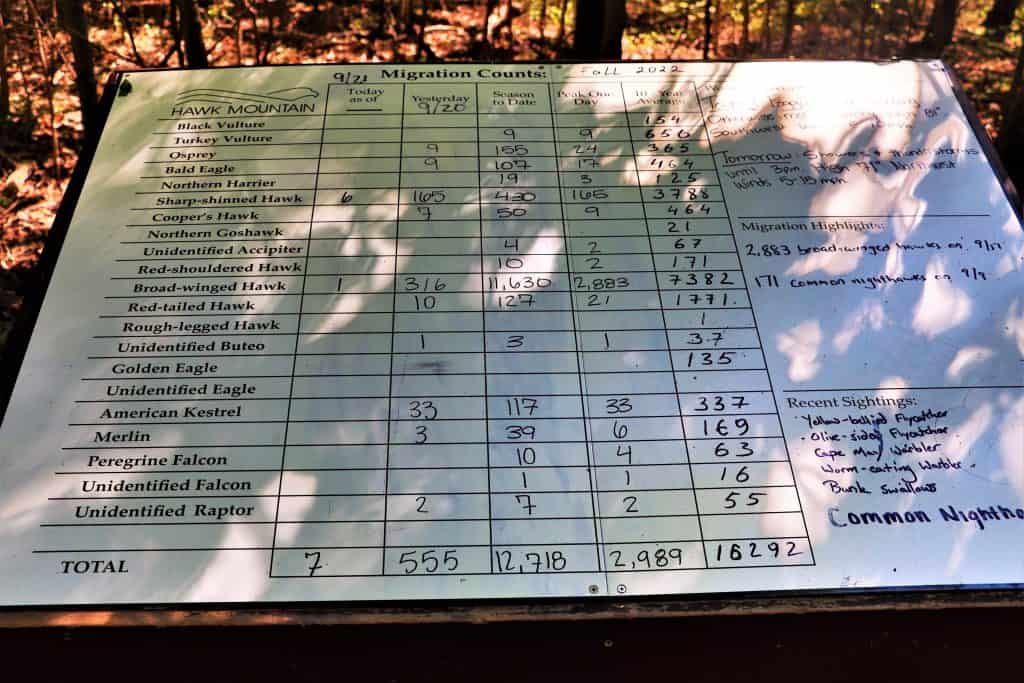 Glancing around, I noticed a cloth owl figurine mounted at the top of a pole on the lookout. I couldn’t help but ask what the odd fixture was all about. Turns out hawks and eagles are owl enemies because the latter raid their nests. The owl figure was meant to draw competitive raptors closer to the spotters. Sometimes the hostile avians attack the mounted decoy, despite the fact that humans are close by.

But why is Hawk Mountain such a popular venue for raptor fans you might wonder? Turns out the Appalachians run northeast to southwest. Prevailing winds arising from the northwest blow into the ridges causing significant updrafts. The migrants take advantage of the phenomenon and seemingly “surf” their way south while migrating.

Hawk Mountain wasn’t always a safe thoroughfare for migrating birds, however. According to Hawk Mountain Chronology, at one time, the Pennsylvania Game Commission offered hunters $5 for every goshawk shot during migrating season, as the birds were considered pests. Appalled by this slaughter, birder Richard Plough photographed hundreds of killed birds and published his photos in “Bird Lore“ magazine in 1932. Note: Photos of the massacred birds are exhibited in the Hawk Mountain Visitor Center.

Two years later, Rosalie Edge, horrified by what she saw, unilaterally ended the annual shoot by buying the property, changing the name of the mountain to the present one and turning it into a sanctuary.

Annually, about 24,000 raptors of all kinds pass by Hawk Mountain, making it a hot spot for birders and nature lovers. The official raptor count begins in mid-August and runs through mid-December. Species-wise, September is best for viewing bald eagles, ospreys and broad-wing hawks. In October, it’s sharp-shinned and Cooper’s hawks, while November is red-tailed hawks and golden eagles’ season.

If you’re not an early riser, you’re in luck. The thermals along Kittatinny Ridge don’t usually start up until 8 a.m., when the birds start using them to ease their way south. Interestingly, spring migrations in the northern direction are not as exciting as those in the fall because the winds disperse the returning birds over a much larger area. 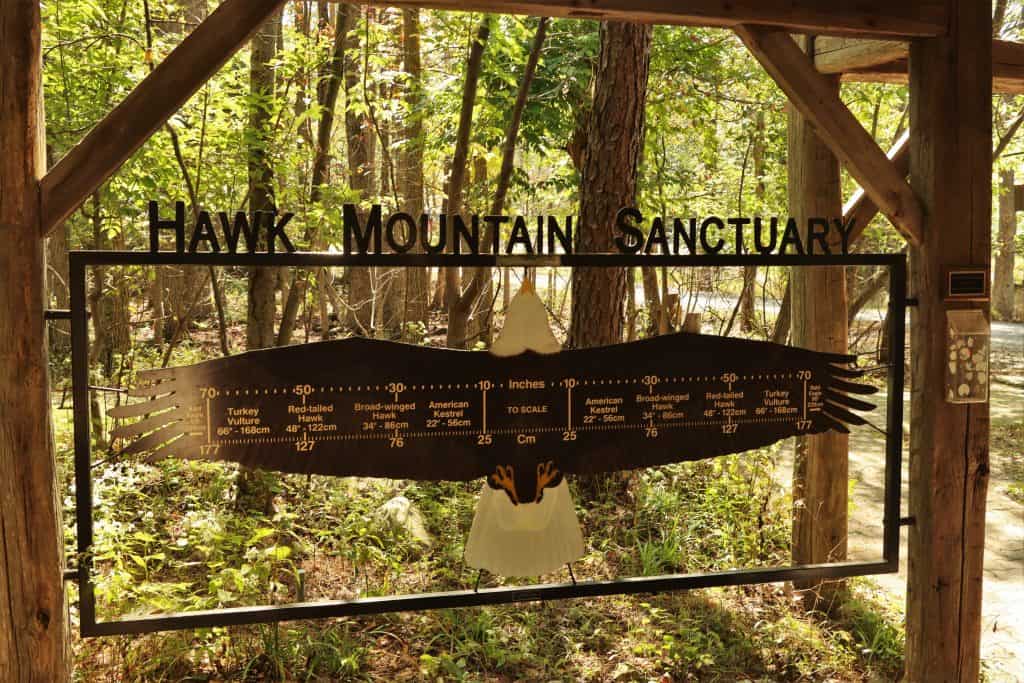 Staff at Hawk Mountain Refuge conduct avian-themed, guided walks, lectures and classes on weekends, and the 2,500-acre, non-profit sanctuary has more than 8 miles of hiking trails. Hiking is permitted only from dawn to dusk and includes a $10 admission fee.  Advance purchase is recommended online at hawkmountain.ticketleap.com. For more information, phone  610-756-6961 or hawkmountain.org.

The road from Hawk Mountain to the Yuengling Brewery in Pottsville takes you through some beautiful Pennsylvania countryside. Along the way, you’ll find several star or “hex” signs painted on the barns. Iconic Pennsylvania Dutch symbols, the star signs are a good example of large-scale folk art. So popular are the geometric paintings, the signs are featured in a driving tour that identifies some of the more than 500 star barns in Berks County. To access the brochure, go to visitpaamericana.com. 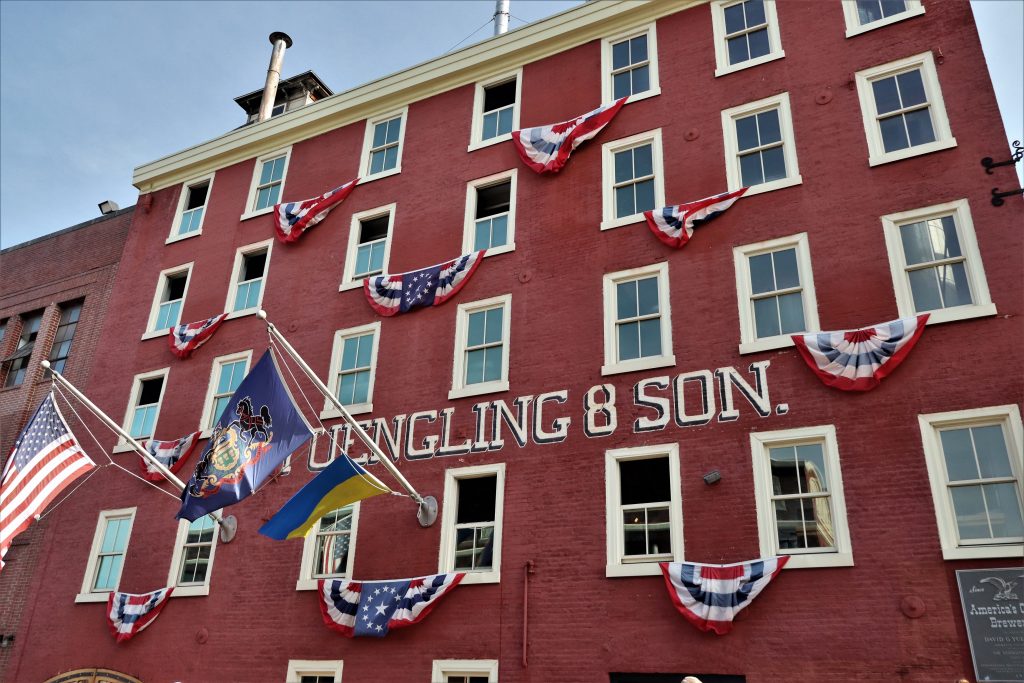 The D.G. Yuengling & Son Brewery is America’s oldest operating brewing company in the U.S. Founded in 1829, the brewery offers tours every day but Sunday and include a walk-through hand carved tunnels where the beer had been kept cool and a look at older beer-making equipment still in use. At the end of the tour, visitors get to choose two 7-oz. samples from a tap of 11 available beers. www.yuengling.com.

In Reading, the 7-story, landmark, Japanese-style Pagoda at the top of Penn Mountain often comes as a surprise to visitors.  In 1906, the curiosity was commissioned by businessman and politician William Abbott Witman Sr., who hoped it would become a luxury resort. Witman is said to have been unable to get a liquor license for the Pagoda and his hopes were dashed. Financial difficulty followed, and the bank financing the project foreclosed on the property. 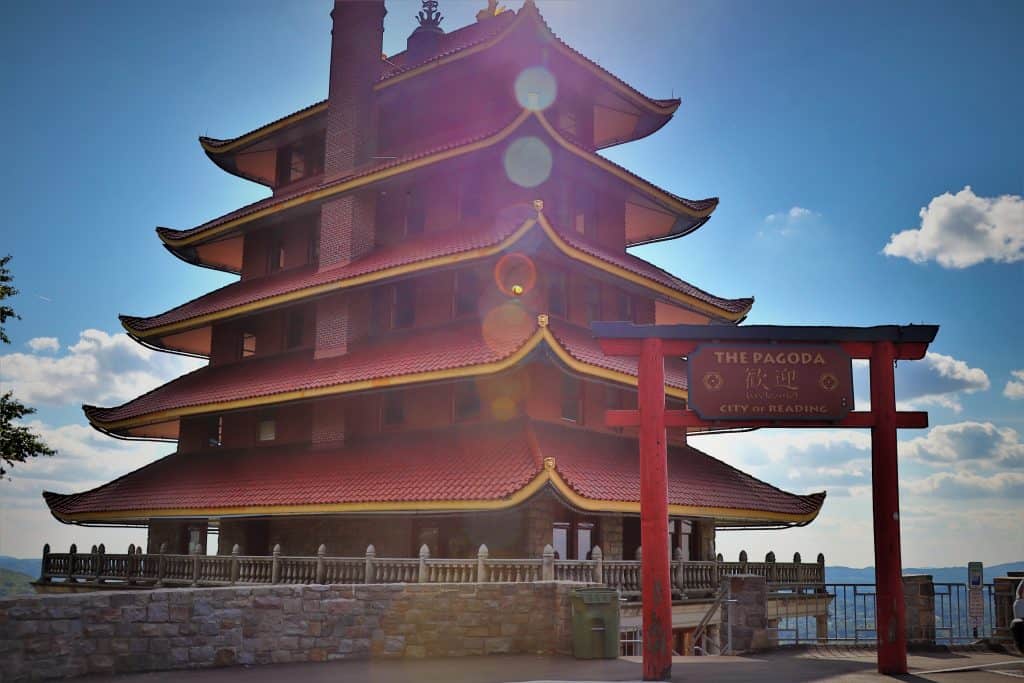 The Landmark Pagoda atop Penn Mountain

Today, the city maintains the property. Although the Pagoda is closed to the public, the up-close look at the structure and the 30 mile vista from the top of the mountain is worth the drive.  www.readingpagoda.com.

Just a mile down the road, the William Penn Memorial Fire Tower is a Work Projects Administration construction built in 1939. Standing at 120-feet, the tower is currently closed but it’s interesting for both its architecture and historical significance. 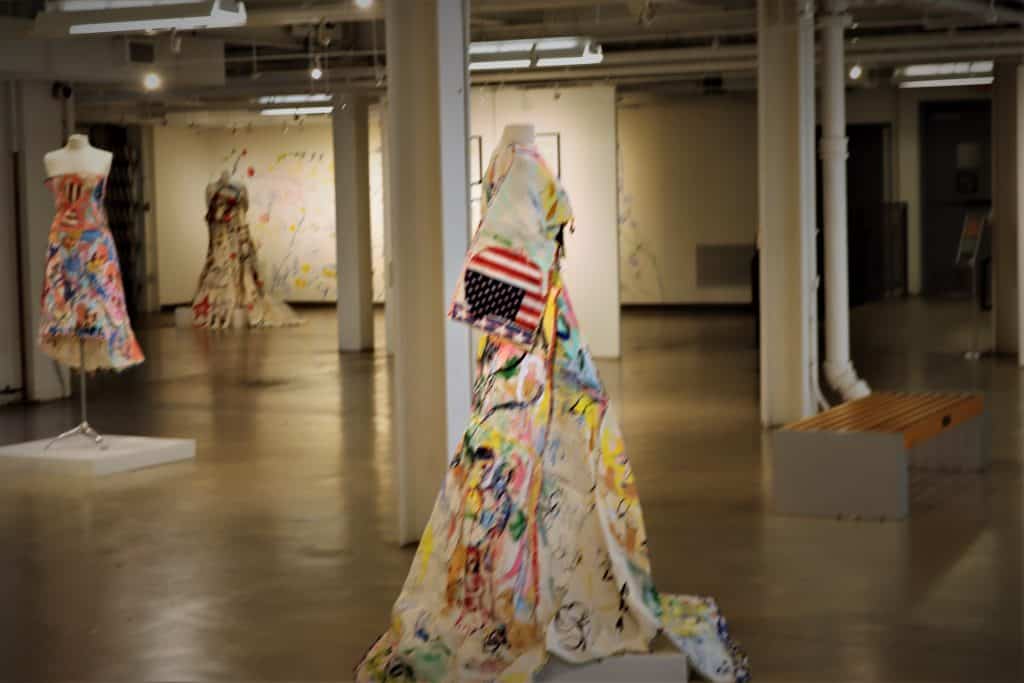 In town, the 5-story GoggleWorks Center for the Arts gets its name from a former goggle manufacturer and is an amazing showcase for the arts with several exhibition galleries, teaching studios, a 130-seat theater and a gift shop with tantalizing inventory of works by in-house and area artists. 201 Washington Street. www.goggleworks.org. 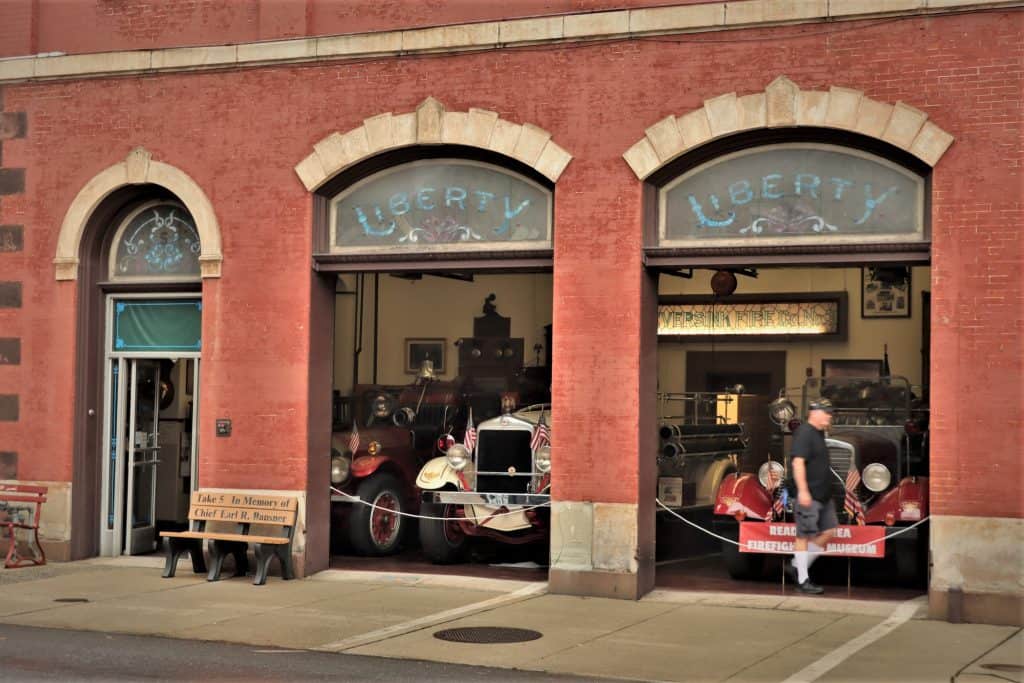 Outside the Reading Area Firefighters Museum

The Reading Area Firefighters Museum is no ordinary museum. Housed in the 1876 Liberty Fire Company, one of the most important and best preserved architectural and historic landmarks in both the city and Berks County, the building still contains the original furnishings from 1876. 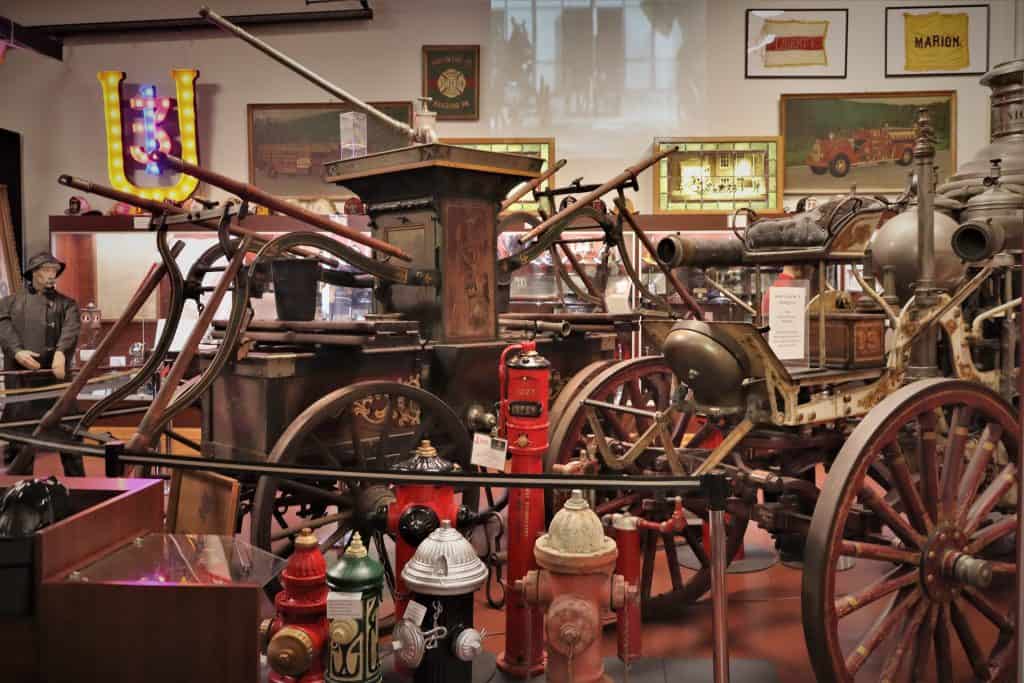 Some of the Items in the Extensive Collection at the Firefighters Museum..

With hundreds of prized artifacts in the collection, the museum the explores the history of firefighting and how communications and firefighting techniques have changed and improved over the past two hundred plus years. 501 5th St. www.readingareafirefightersmuseum.com.

In West Reading, a stroll along beautiful and bustling Penn Avenue will introduce visitors to a blend of shops, eateries and craft breweries. the next street over, Cherry Street, is lined with buildings sporting a series of imaginative murals, many worthy of a camera shot and selfie. 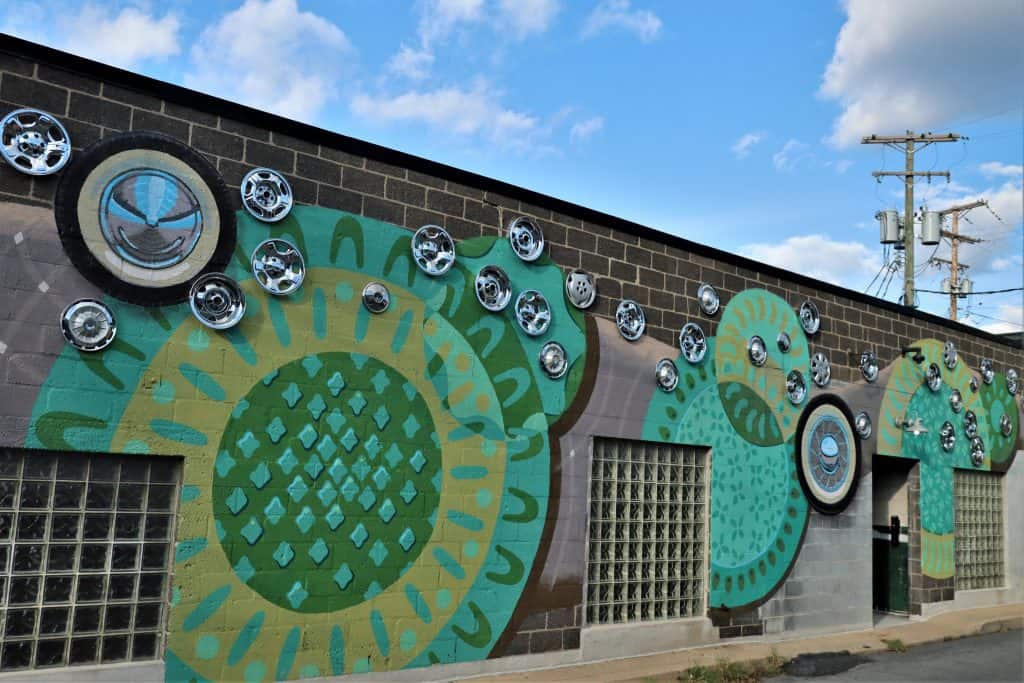 A Mural on Cherry Street in West Reading.

For a Place to Stay, the Doubletree by Hilton, 701 Penn Street, is in the heart of Downtown Reading. This exceptional hotel boasts a fabulous multi-item breakfast buffet, free shuttle service, a creatively designed lobby and first floor, an indoor pool and a 24-hour fitness center. Phone 610-375-8000. www.reading.doubletree.com. 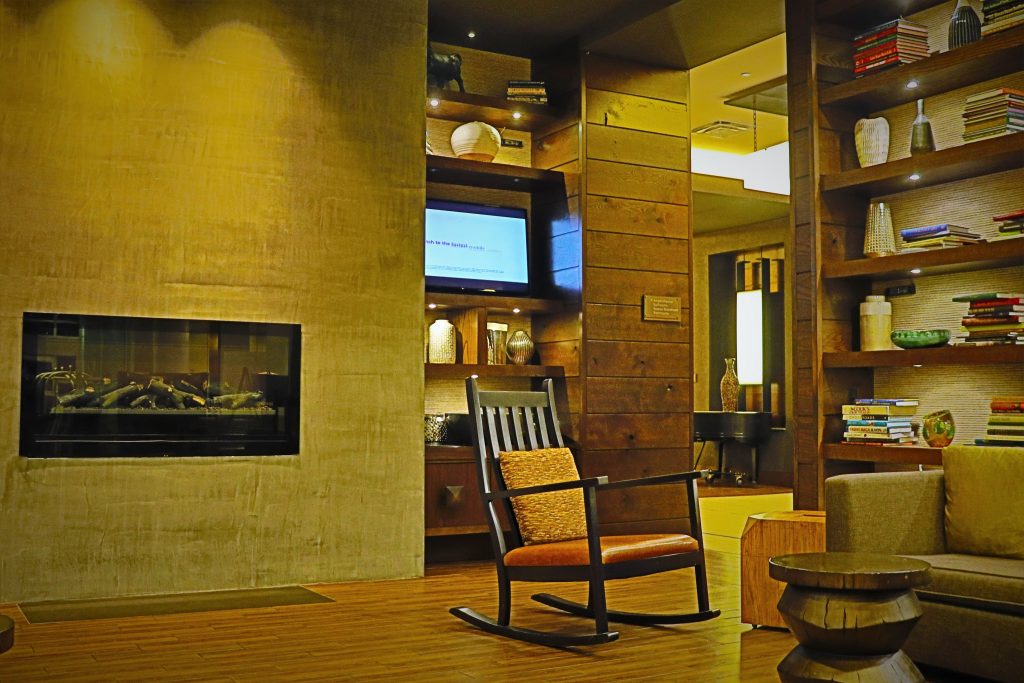 A Cozy Nook at the Doubletree Hotel.

For a Places to Dine, the Peanut Bar and Restaurant, 332 Penn St., has been in the same location since 1933 with three generations of the Kramer family tending the business. Look for bowls of peanuts on each table, a tradition since 1935, as is the patron practice of throwing their empty shells on the floor. 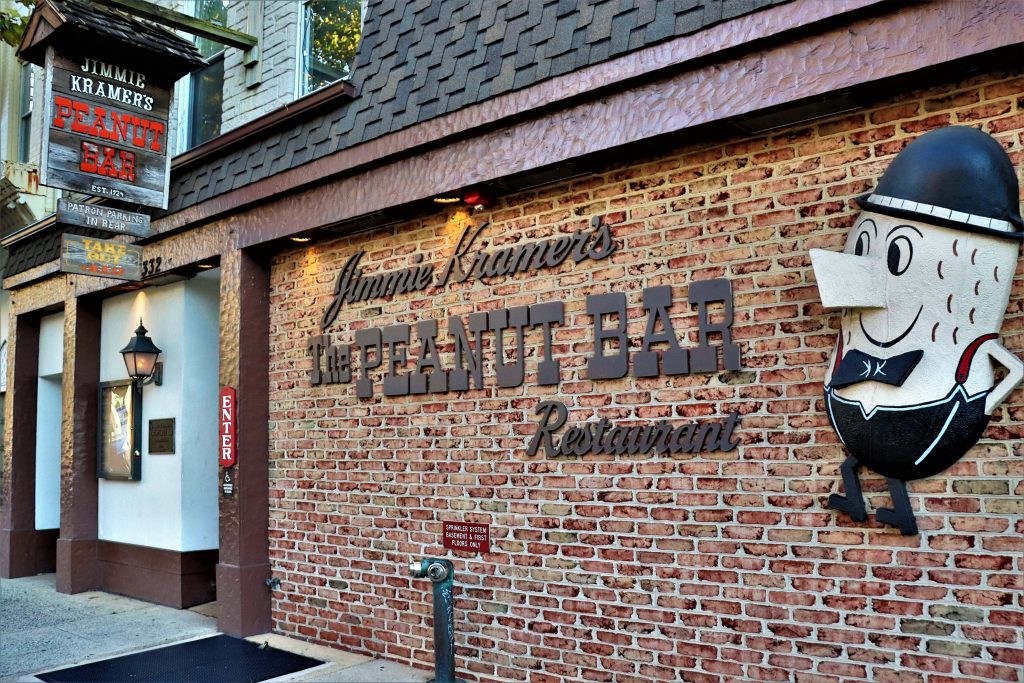 Outside the Peanut Bar. 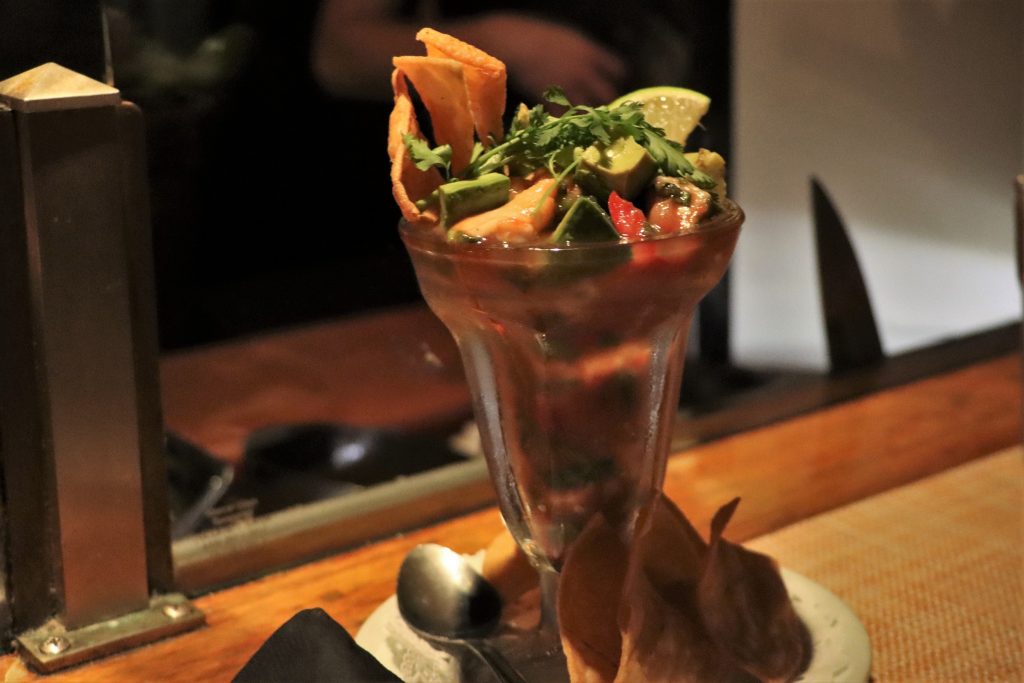 Seafood Ceviche at Judy’s on Cherry.

Judy’s on Cherry calls itself a hearth-fired Euro café that serves Mediterranean fine dining. The creative menu includes everything from wonderfully crafted appetizers and entrees to scrumptious desserts.  For an enhanced experience, try to get a seat at the counter overlooking the hearth fired oven where you can watch the chefs work behind Plexiglass windows turning out everything from freshly baked focaccia to crispy, gourmet pizzas, pastas and tapas-like small plates. 610-374-8511 or www.judysoncherry.com.

For more information on Hawk Mountain and the vicinity, phone 800-443-6610 or www.VisitPaAmericana.com.