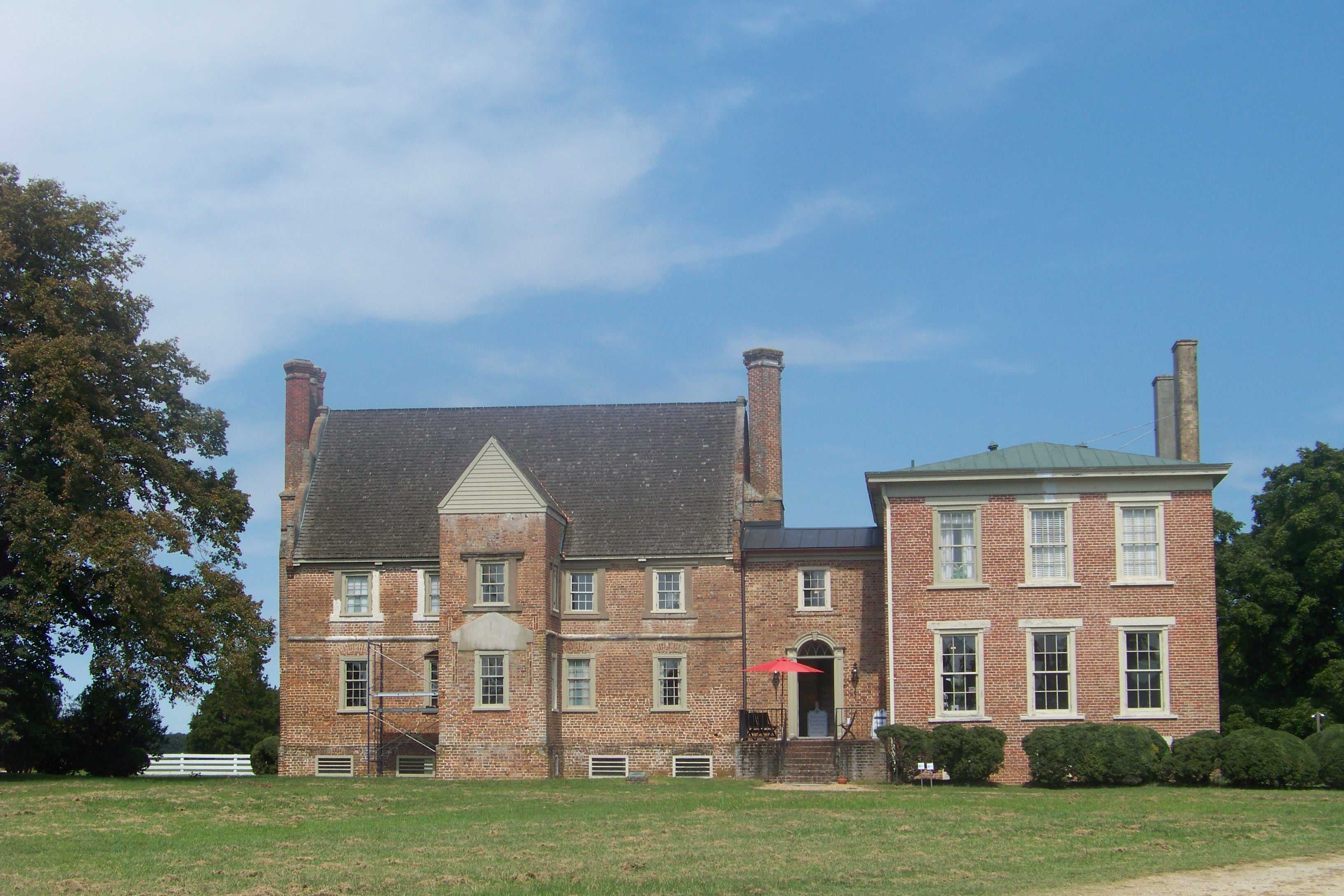 Many of us occasionally yearn for a quiet ride into the countryside “ far from the madding crowd” to escape and just breathe for a bit. Sometimes something different and unique is found along the way and we discovered just such a find in Bacon’s Castle. Getting to Bacon’s Castle is quite unique as you can follow each shore of the historic James River and arrive there. Follow picturesque Route 5 along the north shore to Wiilliamsburg or via Route 31 on the south shore. Ah one might say how does one get over the river?  Answer: By ferry and it’s FREE . A short fifteen minute ferry right between Surry and Williamsburg allows for wonderful views of  the Jamestown settlement from the river as the first colonists saw it and it also is a nice break from the heavily trafficked areas on the Route 17 corridor which is another way to visit Bacon’s Castle but far less pleasureable.

After SurryCounty was formed in the Royal Colony of Virginia in 1652, Arthur Allen built a Jacobean brick house in 1665 near theJames River, where he and his wife Alice Tucker Allen lived. He was a wealthy merchant and a Justice of the Peace inSurryCounty. Allen died in 1669, but his son, Major Arthur Allen II, inherited the house and property. Major Allen was a member of the Virginia House of Burgesses.

Eleven years after the “Arthur Allen Brick House” was built between 1676 and 1677 the Commonwealth embroiled in a provincial rebellion later named “Bacon’s Rebellion”.  Bacon’s Rebellion was a short-lived protest led by recent English settlers, freed indentured servants fromAfricaandEurope, and some Native Americans who objected to Virginia Provincial Governor Sir William Berkeley’s establishment policies.  Some of these policies failed to address western settler’s requests to provide for common defenses against western Native American attacks.  Under the direction of Nathaniel Bacon, one of his captains took seventy rebels south of theJames RiverintoSurryCountyand captured and occupied the “Allen Brick House”.  Allen was an ally with and friend of the Royal Governor.  Before his 30th birthday in December 1676 while hiding inGloucesterCountyafter having burned the Jamestown Statehouse Bacon died from what some believe to be a form of malaria.  Soon thereafter the rebellious forces inGloucesterand Surry were captured, many of whom were tried and hanged, and peace resumed in the Colony.  By the early 19th-century for reasons unclear the Allen Brick House became commonly known as “Bacon’s Castle” both for its association and occupation under Bacon’s Rebellion and its use as a temporary military fortification as a “castle”.

Bacon’s Castle is a rare example of American Jacobean architecture and the only surviving “high-style” house from the 17th century. It is one of only three surviving Jacobean great houses in the Western Hemisphere — the other two are in Barbados.Notable architectural features include the triple-stacked chimneys, shaped Flemish gables, and carved compass roses decorating the cross beams in many of the public rooms. The house is listed on the National List of Historic Places.

We were  given a wonderful tour by Bacan’s castle Director Todd Ballance. and a room by room story unfolded regarding the many changes the house has seen over the years. Thoughtful planning has allowed for many of the architectural elements to be exposed so a visitor can see quite clearly how changes were made and rooms and additions adapted. Between the mid to late-nineteenth century, Bacon’s Castle underwent several modifications. An original one story service wing was replaced by a taller Greek Revival wing.

Around this time, the entrance was moved from the center of the main block to the hyphen between the original house and addition, and diamond-pane casement windows were exchanged for double-hung sash windows. Moving the door left a scar in the location of the original pedimented surround. All of these changes were maintained in the restoration.

The many outbuildings on the property are excellent examples of structure use such as the smoke house (the oldest remaining one in Virginia,) the slave quarters, barns and stables.

The historic gardens have and are being interpreted to the earliest times of occupancy and are reflective of both the food and fauna of a colonial era plantation. The 1983 discovery of the largest documented 17th century garden in America at Bacon’s Castle changed the history of landscape gardening in America. Before 1983, scholarship of Virginia’s garden history began with the 18th century and all 17th century gardens were thought to have been utilitarian. But, the archaeological evidence at Bacon’s Castle indicated a very large garden of a formal English Renaissance design, with alcoves in the hedge on the west side featuring places to sit and enjoy the garden.The restored garden includes border beds filled with fruits, shrubs, and flowers; a forcing wall and starting beds; and extensive vegetable plots. The G arden Club of Virginia is taking on further restoration as an upcoming  project. ( Unfortunately the bountiful fig trees had been picked clean by local creatures before I could get to them !)

The Gardens at Bacon’s Castle

Bacon’s Castle was acquired by Preservation Virginia  (formerly known as the Association for the Preservation of Virginia Antiquities) in the 1970s and restored some at that time. Preservation activities continue, as with most historic properties,  while guests can continue to visit the Site.

Bacon’s Castle as well as operating as a house museum and historic site with 40-acres of outbuildings and dependencies is an excellent place for weddings, conferences and other events. It’s pristene setting offers an excellent backdrop for these occasions.

You can also simply sit on a bench by the gardens and have your bag lunch.

Between March and November guests may tour the Castle ($8 per adult) and purchase merchandise in its gift shop on Fridays and Saturdays between 10 a.m. and 4 p.m. and Sundays between 12 and 4 p.m. Group tours are available with advance reservations. This is a historic property with stairs to climb. Lots of free parking. For further information please call or visit online the following sites.