Where to begin with the black Americans’ quest for equality, underscored by the Woolworth sit-in at Greensboro, NC? The date was Feb. 1, 1960. As good as any beginning is the city’s North Carolina Agricultural & Technical State University. There, statues of the four freshmen in front of the Dudley Memorial Building commemorate their courageous mission to desegregate the downtown lunch counter then for whites-only. But it took almost six months to achieve. Of the four, Ezell Blair, Jr. and Joe McNeil are still living at this writing; the other two David Richmond and Franklin McCain are deceased but not forgotten.

To learn more about this momentous event, head to the International Civil Rights Center and Museum in Greensboro, the state’s third largest city and named for Gen. Nathanael Greene of the American Revolutionary War. At the museum, which opened in 2010, prepare for an understanding of how African-Americans suffered in the Jim Crow South, but it’s not easy to take. In a short film, actors are shown in a dorm room planning the sit-in. 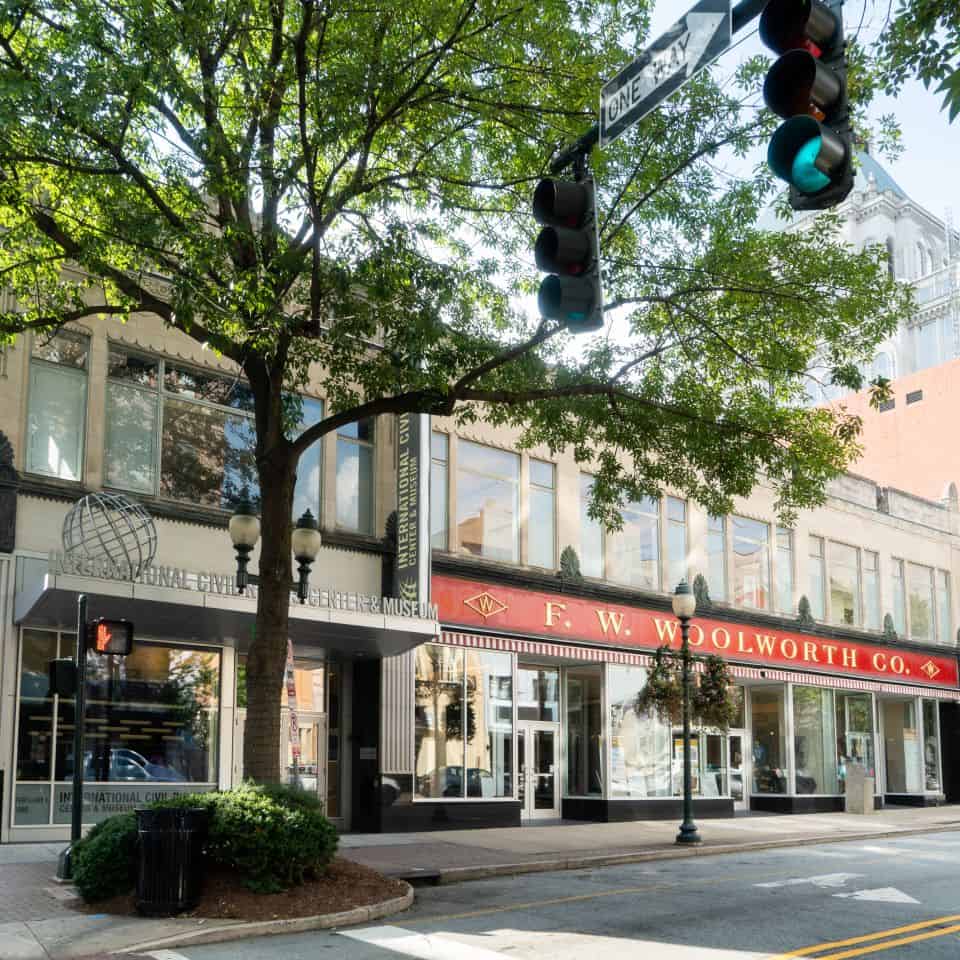 Today an average of 75,000 visitors a year tour the two-level and bottom-level museum, which was the five and dime store. But visitors might pass it up unless they see the original F.W. Woolworth and Co. sign over the entrance. Admission is charged.

I toured these historic sites with the Society of American Travel Writers as part of an eastern chapter meeting.

At least in the south, black segregation was set by law. It became real when as a youngster I drove with my mother and brother from Missouri to Dallas to visit my dad. (My parents were then divorced). On a public bus, authorities required blacks to sit in the rear; today I think how a country founded on freedom could tolerate segregation in Greensboro and elsewhere. But of course, it did.

As our group descends to the museum’s bottom floor, we see an L-shaped lunch counter with at least 53 seats in their original location. On a wall are signs advertising, for example, a cup of coffee for a dime, a cherry pie15 cents, and a turkey club sandwich, 65 cents. After all, this was more than 60 years ago.

In contrast, segregation’s brutal side was set out in the museum’s Hall of Shame with disturbing photos of atrocities committed against young blacks and the Freedom Riders. They are definitely not for the squeamish. Angelea Joyner, a guide, carefully explains the photos, which are strangely framed in non-rectangular shapes. One photo shows Emmitt Till, a teenager murdered for allegedly offending a white woman. For 5th graders and lower, the hall is not recommended, says Will Harris of the museum staff. Not surprisingly, it’s informally known as the “hall of grief.” There is an exhibit of a KKK robe that was donated by a relative. 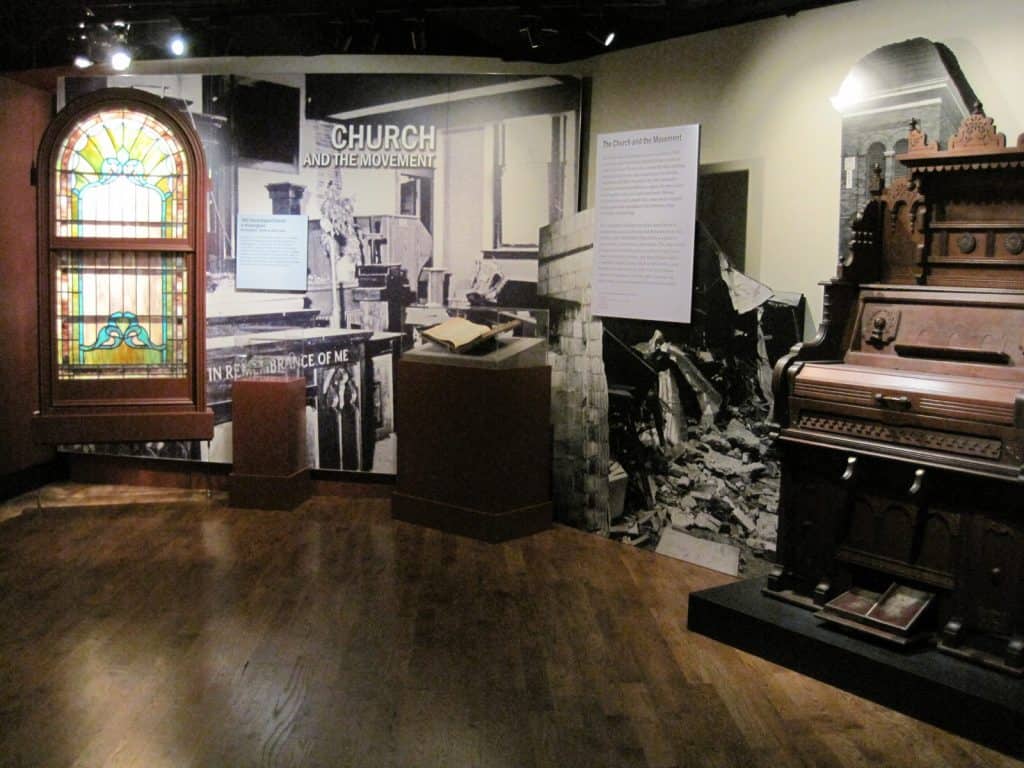 One of many exhibits.

Some 13 galleries are packed with photos, artifacts, and interactive exhibits. The museum’s hours are from 10 AM to 6 PM, October to March, and from 9 AM to 6 PM, April to September. It’s closed on Sundays.

Further on in Greensboro, we visit the Historic Magnolia House. This restaurant/museum was included in The Negro Motorist Green Book, a travel guide to non-segregated facilities from the 1950s and 1960s. 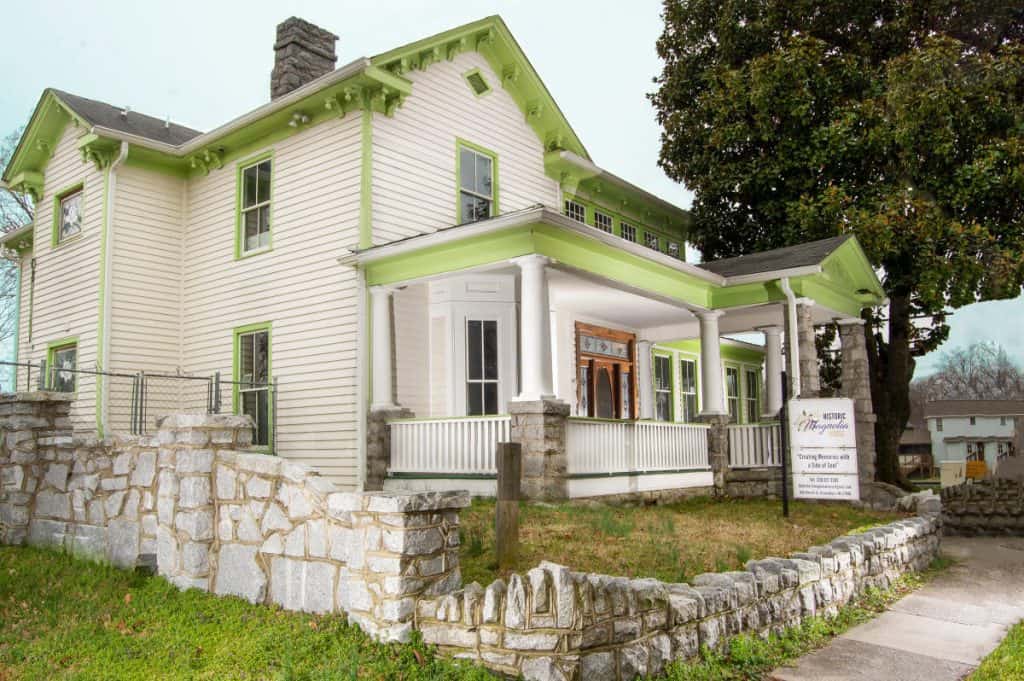 At the Magnolia, located in a nondescript neighborhood, we dined on Magnolia’s Shoebox Lunch in a 6 1/4 by 9-inch container–the shoebox– with historic information printed on three sides. In earlier times, households assembled boxed meals for travelers, which might include cold fried chicken, pound cake, a ham sandwich, and fruit.

Famous names of Magnolia’s guests reads like a who’s who of black culture. They included Ray Charles, Jackie Robinson, Louis Armstrong, and James Baldwin, according to the city’s tourism office.

Today, the rates at Magnolia House’s four rooms begin at $220 a night but some have a shared bathroom. It’s a modest-looking place but you’d never think of it as a museum. But a museum it is, which is listed with the National Trust of Historic Places. Photos of historic events and backgrounds hang from the walls and displays for The Green Book and the New Age of the Black Traveler. Artifacts from the era are displayed in glass cases.

As we motor to Durham, we stop at the now-vacant home of Pauli Murray, a civil rights leader who grew up in the city. The home is undergoing restoration. She was associated with the Center for History & Social Justice, and her life is chronicled in a series of kiosks in front of the home lined up from the street. A bookmark that we got portrays the face of this talented woman with the words, ” P is for Pauli Murray”. Aya Shabu is our guide at Murray’s home. As we wander around the uncut grass, she leads us in breathing and stretching exercises. Why I never did ask. 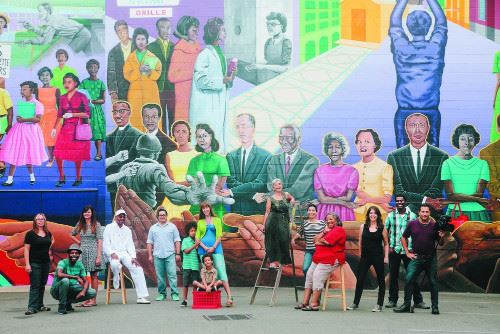 In Durham, we see an outdoor mural in a parking lot with paintings of people associated with the black rights movement. Named the Durham Civil Rights Mural, it portrays more than 50 involved with civil rights. Elsewhere, Black Wall Street within a four-square block area includes the North Carolina Mutual Life Insurance Co. and the Mechanics and Farmers Bank from an earlier age. Maya Angelou, civil rights activist, poet, writer, and professor at Wake Forest University, lived in Durham. She had addressed former President Bill Clinton’s inaugural at the U.S. Capital in January 1993. At the Rofhiwa Book Cafe in east Durham, books on civil rights and black culture appeal to a wide range of interests. Operated by Naledi Yaziyo from Capetown and Bev Tumi Makhubele, it opened in May 2021. Frankly, I never knew so many black writers have been published, and I bought The Fire Next Time by James Baldwin. It also sells online. The store’s name in a Southern African language means “We have been given,” explains Yaziyo. The excellent coffee made fresh comes from a black-owned roaster.

In Winston-Salem near Greensboro and Durham, the city’s visitor center publishes an African American Arts & Culture Guide with a suggested itinerary of sights.