See the Best of Istanbul 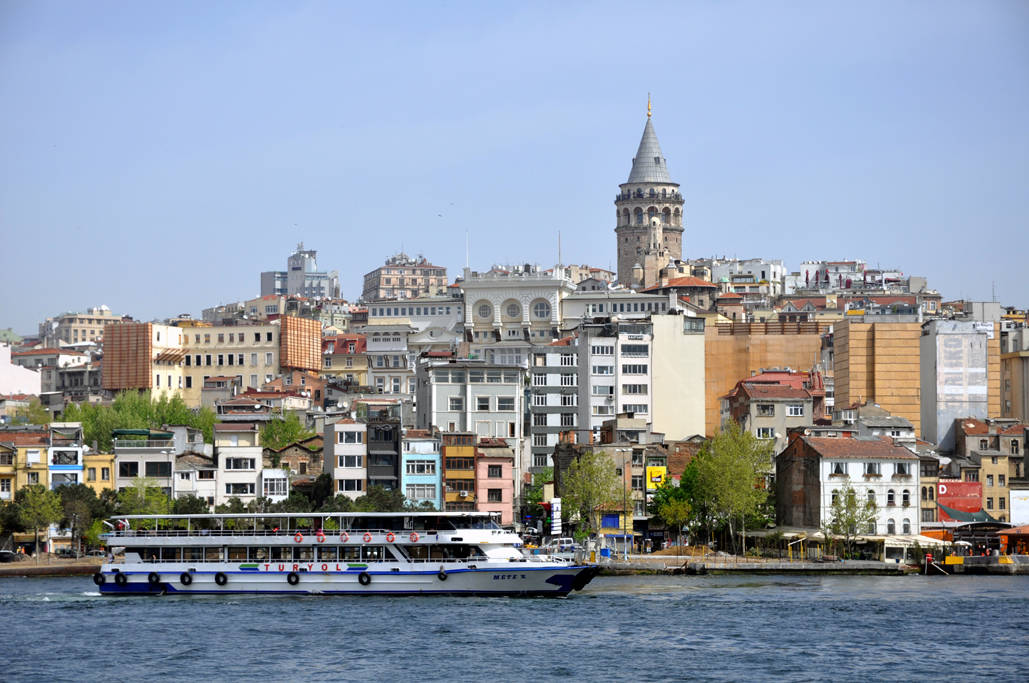 Formerly called Constantinople and Byzantium, Istanbul is the only city that spans two continents. Over 16 million people live in this dynamic metropolis. The historic and commercial portion lies in Europe where I stayed at the upscale Hilton Doubletree.

I can vouch that the Turkish people are most hospitable. Pet lovers will be glad to know that homeless dogs and cats are cared for by the municipality.

“In 2015, Turkey hosted 784,917 visitors from the USA,” says Gorkem Kursunlu Karakus, Counselor with the Culture and Tourism Counselor’s Office,
Embassy of Turkey.
…………………………………….
With myriad attractions and finite time, how do you choose what to do in this ancient yet evolving city? Ten places/activities are not to be missed.

Separating Europe from Asia, this 17-mile waterway joins the Black Sea to the Sea of Marmara. Near this stretch, the five-mile-long Golden Horn is an inlet dividing a portion of Europe.

The Bosphorus Strait with boat tours from Istanbul.

My guide Emrah and I board a ferry at Uskudar, one of the oldest inhabited areas in Asia. Our two-hour leisurely cruise is a welcome oasis from the bustling city, twice the size of New York.

Midway the Bosphorus is Maiden Tower, a beloved aged “landmark” with a stormy legend. We glide by a university, fortress, and forested slopes draped in redbud trees. The captain turns around at a second bridge and meanders by Asia’s shoreline adorned with elegant homes and mosques.

Back at Uskudar, the bridge is lined with fishermen. A level below there’s an array of divine seafood restaurants with the fresh catch of the day. At Galapera Restaurant, we dine on delectable bream, shrimp, garden salad, baklava, and fruit. Turkish cuisine is nourishing, fabulous, and reasonably priced. 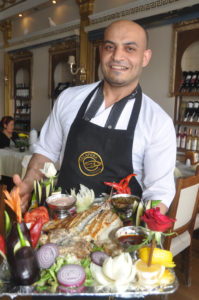 This conical-shaped structure dominates the Istanbul skyline. In 1348, the Genoese erected this 220-foot high hillside structure as a defense. Formerly a jail and fire tower, the edifice is now a restaurant and overlook. An elevator whisks us to the top to glimpse the stunning western portion of the city, the Golden Horn, and Sea of Maramara.

Constructed in the 19th century, this opulent palace lies along the European shore of the Bosphorus. A lovely fountain and winding walkway graced with tulips leads to the 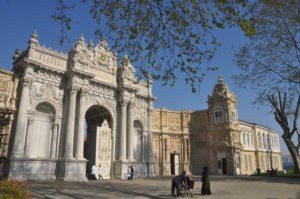 front door. The Ottoman-style interior is an adaptation of a traditional Turkish house in majestic scale with brick interior and stone external walls and timber floors. “Every eight to ten years, it takes 45 days to disassemble 10,000 pieces of the elegant chandelier for cleaning,” the tour guide explains.

This soul of Old Istanbul (the Old City) contains a wealth of dated art and architecture. My guide and I stroll through the Hippodrome onto a series of concentrated narrow, curving streets.

In an open roped off area, men kneel. Islam is the main faith in Turkey. There are 3000 mosques in Istanbul. Five times a day muezzins call people to pray.

Parallel to the Blue Mosque is the “Church of Holy Wisdom.” Commissioned by Justinian as the greatest ever place of worship, Hagia (Aya) Sophia was finished in 537 A.D. Over time, it has withstood earthquakes, looting, and conquests. 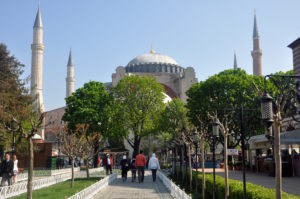 The Hagia – Sophia, Church of Holy Wisdom in Istanbul.

In 1935, Ataturk transformed the grand building covered with thousands of gold tiles into a museum. A restoration project exposed Christian mosaics dating to the 9th century. Once the cathedral of Constantinople, Hagia Sophia stands nearly 18 stories high and 100 feet across. Few may know that Turkey is the acclaimed “Cradle of Christianity.”

After a day of sightseeing, a Hammams (Turkish bath) can be therapeutic. A favorite centuries-old pastime of Istanbul residents, genders are administered separately. The experience begins with a tasty glass of berry juice. A masseuse scrubs the patron’s dry, dead skin with a kese, rough loofa-like sponge. This is followed by lathering, rinsing, and a massage to one’s specification.

Emperor Justinian ordered the construction of İstanbul’s largest surviving Byzantine cistern. This incredible 336-columned subterranean reservoir is an excellent retreat on sweltering summer days. Originally known as the Basilica Cistern, it was designed to service the Great Palace and surrounding buildings. It could store over 2.82 million cubic feet of water delivered by more than 12 miles of aqueducts from a pool near the Black Sea. Strolling along raised wooden platforms, visitors feel water dripping from the vaulted ceiling as schools of carp crisscross the water.

Embracing Europe’s tip (“Seraglio Point”), this beautiful palace is considered the pulse of the Ottoman Empire. Over 20 sultans as well as thousands of slaves and concubines lived here. 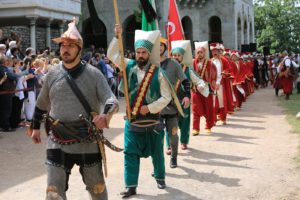 Conquest Celebration at the Topkapi Palace in Istanbul.

Despite its grandeur, much blood was shed on-site. Now, it showcases a treasure of Islamic art. Marble-paved terraces overlook the Bosphorus Strait.

Every visit to a new place requires a little shopping or browsing. Established in the 15th century and covering 65 streets, the Grand Bazaar is the world’s oldest and largest shopping center. Vendors offer food samples and Turkish tea. There is no pressure to buy. Haggling is the norm. Lovely carpets, ceramics, jewelry, metal wares, and leather goods are amongst the sundry items for sale.

On a different day, of course, my guide and I pause for a different mouthwatering lunch at nearby Semazen Kebab & Grill.  Tasty lamb & chicken kabob on rice, a bread loaf, and water sate our palates.

In April, check out the Tulip Festival.  The national flower, tulips were first produced in Turkey and later introduced to Holland. 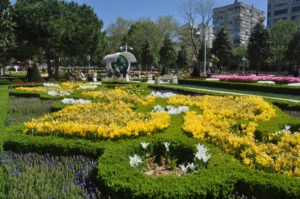 Tulip Festival throughout Istanbul every Spring.

It is better to hire a taxi driver than drive yourself. Employing a private guide will make your trip easier and more meaningful. For the hypervigilant, bear in mind that traveling with a group or on a cruise ship draws more attention.

Turkish Airlines is a distinguished company with transcontinental and domestic flights. The food trumps many competitors. Service and movies are wonderful.

Editor’s note: Persons with disabilities planning to visit Turkey should read the Turkey Travelers forums on  Trip Advisor for assistance.

Some or all of the accommodations(s), experience(s), item(s) and/or service(s) detailed above were provided at no cost to accommodate this review, but all opinions expressed are entirely those of the author and have not been influenced in any way.