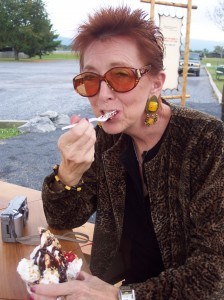 Writing biographical information for me, is an exercise akin to composing my obituary. What do I want to be remembered for? How do we distill a lifetime of big and small experiences into a few paragraphs? Should one tell the good, the bad and the ugly? Do you care if I stole flowers from the neighbors garden when I was six?

Always seeking that brief moment of fame—leave your headlights on, I’ll put on a show, my first brush was in baby-sitting. As a young teen in our blue collar South Minneapolis, Minnesota neighborhood, once or twice, I sat for the children of Charles Schultz (Peanuts creator). Obviously this was B.H.B.S.—before his big success.

During my early twenties, I worked for RCA Victor in Hollywood writing pay checks for Elvis Presley and all the other RCA recording artists. They laughed me out of an interview at the Pink Pussycat. Impressed yet?

In the 70’s I was elected to office in suburban Minneapolis. This was early enough in women’s political history to make national news. Later a controversy over nude dancers at a local nightspot threw me back into the national media spotlight.

After many years in the real estate and contracting business, I gave into wanderlust leaving Minnesota for Europe and a few years of constant travel. I lived—read changed suitcases—in that wonderful metro DC area: Arlington, Virginia for 20 plus years and now reside in the Charleston, SC area minutes from the Atlantic. We still hit the road one to four weeks a month and love every minute of it.

Twenty years ago a commercial real estate client, that just happened to be an international cable television company, encouraged me to get involved in television. That launched a another new life. I’ve played bit parts in bad movies including a recent episode of  televisions “Reckless” filmed in Charleston, major parts in training films, appeared in commercials and public service announcements,  photographed for many print publications, hosted local television, produced programs for cable broadcast in several states and been the guest travel expert on radio and television.  I appeared on Washington DC’s CBS affiliate WUSATV news for several years as the travel expert, have done live radio reports for Travel World Radio and was with one of the worlds largest selling newspapers, The Weekly World News, for eight years.

Gallagher’s Travels on the web and anywhere else, is to help you get more out of your journeys by relating my extensive travel experience  and that of our guest journalists. We personally visit every site written about on these pages.