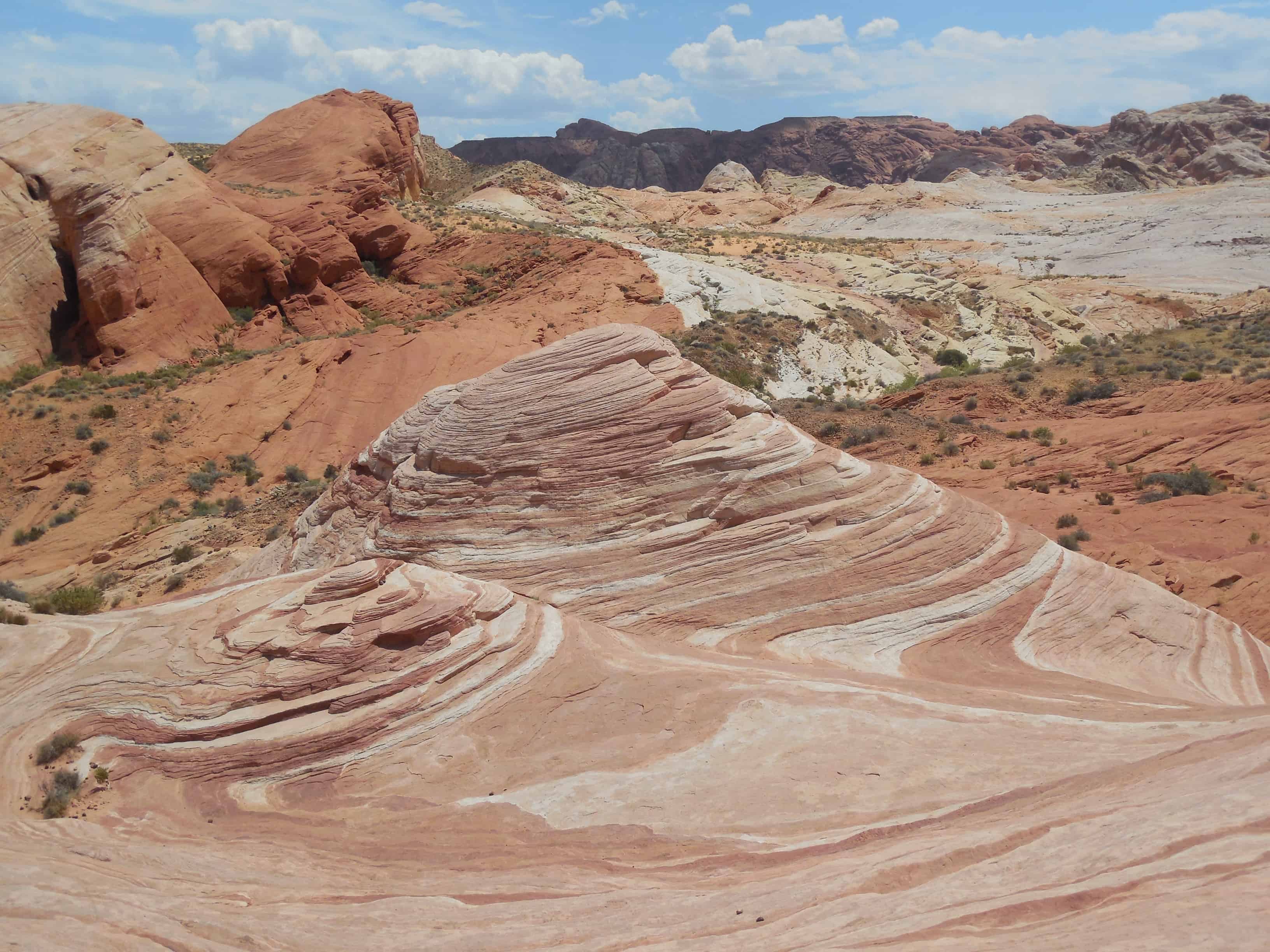 Text  by Jeff and Stephanie Sylva

Ah, Las Vegas – the dazzling lights, the excitement of the play on the casino floor, the secrets that remain in Vegas, and the stunning beauty of its natural treasures. Wait – what’s that? Stunning natural beauty? Isn’t Las Vegas in the middle of the desert? That may be, but a number of beautiful, scenic parks are within easy driving distance of Sin City. We recently spent five days in Las Vegas avoiding The Strip and visiting two gorgeous natural parks and a few of the city’s noteworthy museums. 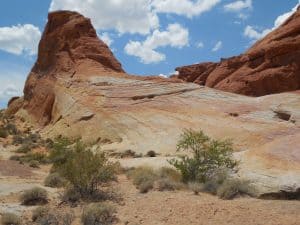 Our first visit was to Valley of Fire State Park, Nevada’s oldest and largest state park. It didn’t take long after entering the park to know the reason for its name.

Striking red sandstone formations with amazing color variations present an other-worldly landscape. The park has a variety of scenic drives that make it very easy for those not interested in hitting the trails to experience and appreciate the park’s beauty. Valley of Fire State Park is 55 miles northeast of Las Vegas.

We decided to hike two of the park’s easy to moderate trails and would highly recommend them. 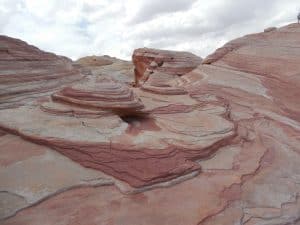 The Fire Wave in the Valley of Fire State Park

White Domes is an area of sandstone formations with brilliant contrasting colors. The 1.25-mile hike took us down a gorge with towering brilliant rock formations on both sides and then to a cool slot canyon.

Our second hike was the 1.5-mile Fire Wave Trail. At the end of this trail is the stunning rock formation Fire Wave; the reason for its name was instantly obvious once we saw it. Brilliant red sandstone deposits in swirling formations resembling rivers – or red waves – are frozen in time.  In addition to colorful rock formations, the park also has a number of 3,000-year-old petroglyphs and exhibits of petrified wood.

Crimson glory rising from the desert 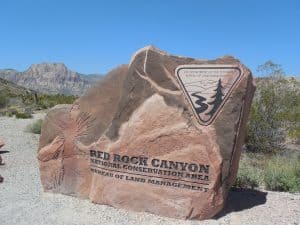 The second park we visited was Red Rock Canyon National Conservation Area. The canyon is aptly-named because of the crimson-colored rock formations that rise almost magically from the arid floor of the desert. The park has excellent hiking trails, outstanding rock-climbing areas, and a visitor-friendly 13-mile scenic drive.

Just like the Valley of Fire, Red Rock Canyon is accessible for all visitors to enjoy the park’s stunning rock formations from the scenic drive stops. At one of the park’s overlooks, we remarked that is was amazing that this serene view is only 15 miles from the frenetic spectacle of The Strip. The park has an excellent Visitors Center with a number of well-developed interpretive exhibits and displays. 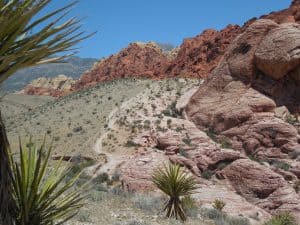 Another natural area, located just 45 minutes from Las Vegas, is Mount Charleston, part of the Spring Mountains National Recreation Area. We didn’t have time to visit Mt. Charleston, but it is a year-round recreation area offering hiking, camping, picnicking, skiing, snowshoeing, and snowboarding.

Mount Charleston can be a perfect respite from the Las Vegas heat since the temperatures here are usually 15-20 degrees cooler.

A museum with “connections”

Another unique way to experience Las Vegas is to visit some of the museums that take a peek into the past. One we strongly recommend is The Mob Museum, located in a former courthouse just minutes from Fremont Street.  According to its mission statement, “The Mob Museum is a nonprofit organization with a mission to advance the public understanding of organized crime’s history and impact on American society.” Obviously, the story of the mob and its influence has a major chapter in Las Vegas and The Mob Museum provides a fascinating history of the mob’s presence in Sin City. 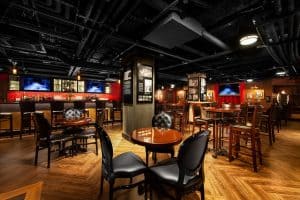 The Underground – The Mob Museum’s Speakeasy

But this Museum also presents an in-depth study of the origins of organized crime and its spread throughout major U.S. cities. Exhibits include a number of authentic artifacts including the actual wall from the St. Valentine’s Day Massacre.

After spending several hours viewing the museum’s exhibits, we relaxed over classic cocktails in the museum’s newest venue. The Underground, a Prohibition-era exhibit with a working distillery and a speakeasy. 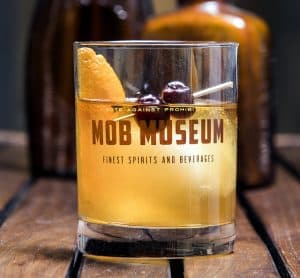 enforcement encounter and the responses they must consider. “Crime Lab Experience” includes hands-on experiences to examine cause of death, DNA, and fingerprint analysis.

One Las Vegas myth is that people often come to town looking for a sign. Well, you can find more than 200 of them at The Neon Museum. The one-hour guided tour of the museum’s outdoor exhibit space – The Boneyard – is part history and part art. 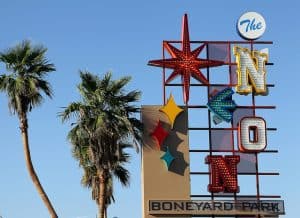 The neon signs, 11 of which have been fully restored, are rescued signs and architectural landmarks from some of the city’s most celebrated properties dating from the 1930’s to the present day.

During the tour, you will hear some quirky stories about who created each sign, what inspired it, where and when it was made, and how it fits into the development of Las Vegas and the city’s rich history. Some of the more familiar signs include ones from Caesar’s Palace, Binion’s Horseshoe, the Golden Nugget and the Stardust.

In addition to The Boneyard, the museum includes The North Gallery, which contains approximately 60 additional signs and is also the site of the museum’s newest program “Brilliant!” The museum’s visitor center is cleverly housed in the former La Concha Motel lobby. 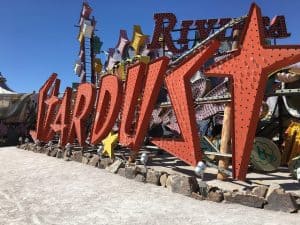 The Neon Museum also maintains an Urban Gallery – a collection of nine public art installations along Las Vegas Boulevard. The first installation was the Hacienda Horse and Rider on Fremont St. Other signs include Binion’s Horseshoe, The Silver Slipper, the Lucky Cuss Motel and others.

A blast of a museum

The final museum that intrigued us was the National Atomic Testing Museum. Established in 1951 the Nevada Test Site was the site of the Cold War’s most unnerving practice – the detonation and recording of the destructive effects of America’s nuclear bombs. Through a variety of exhibits and a wealth of artifacts, the museum, which is located just off The Strip on Flamingo Road, tells the story of America’s nuclear weapons testing program at the Nevada Test Site. They present a sometimes chilling but fascinating history of the development and testing of America’s nuclear arsenal. One exhibit that was especially immersive was the simulation of an above-ground nuclear test.

As sobering as the history of nuclear testing is, there is a kind of strange humor in the city’s 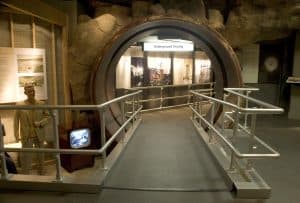 fascination with the bomb testing. Las Vegas actually took to calling itself “Atomic City, U.S.A.” People in Las Vegas would hold “bomb parties” on the roofs of hotels hoping to catch a view of the bomb’s flash and resulting mushroom cloud. The museum has scores of artifacts recording this fascination –  pictures of the “bomb parties,”  pictures of Miss Atomic Bomb 1957 clothed in a cotton mushroom cloud, authentic food and cocktail menus listing such items as “Atomic Punch”  and “Megaton Burger.” This rather carefree attitude about such a destructive practice just seems to fit with the image Las Vegas aspires to – one where nothing should be taken too seriously.