Leipzig, Germany: One Of The World’s Leading Cities For Music. 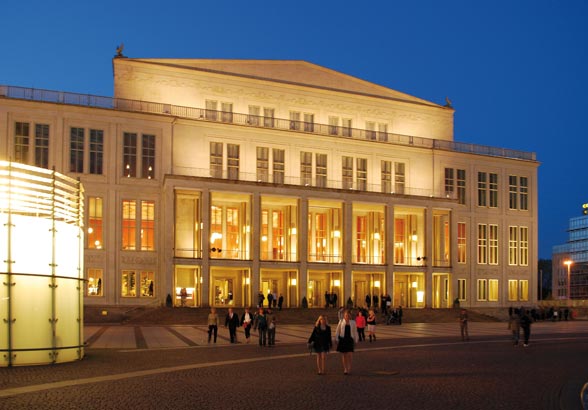 To aid visitors the city has installed a series of stainless steel markers (shaped somewhat like boomerangs) in the sidewalk pavement to guide people along the three mile long “Leipzig Music Trail” where 23 music sites are located.  The city is seeking to have the “Trail” declared a UNESCO heritage site. 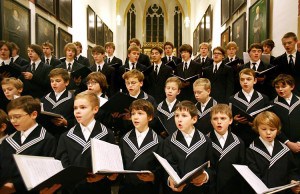 One of the most popular sites is St. Thomas Church home of the world famous St. Thomas Boys Choir which is celebrating its 800th anniversary this year. The choirboys attend the church school and practice their singing several hours each day.  They sing during worship services as well as on concert tours worldwide. Bach is buried beneath the floor in front of the alter marked by a large bronze plaque  His grave was relocated here in 1950.  He was cantor (music director) here from 1723 to 1750.
Originally Catholic, St. Thomas Church is a Lutheran church today.  There are beautiful stained glass windows in the church honoring Bach and Felix Mendelssohn.  The Bach Archives (museum) is located nearby and each year a Bach Festival is held at the church.

The Mendelssohn House in Leipzig is the only remaining private residence of the composer Felix Mendelssohn. His family moved into the apartment here in 1845. It has been carefully restored and since 1997 has been the a museum.

Letters, sheets of music, water colors painted by Mendelssohn himself, authentic furniture, the composer’s study, the music salon all reveal insights into Mendelssohn’s life. His years in Leipzig were the most important and influential period of his short life. He died at age 51. Because of his Jewish heritage, the Nazi powers tried to eradicate all recognition of Mendelssohn including destroying monuments in his honor, despite the fact that Mendelssohn was one of the most significant composers of the first half of the 19th century. 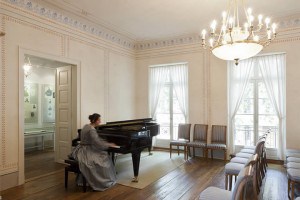 Robert Schumann and his wife Clara Wieck Schumann also lived and worked in Leipzig, as did Edvard Grieg and Richard Wagner.  Sites associated with these composers are part of the Leipzig Music Trail.  A new museum dedicated to the life and works of Wagner will open in here in 2013. 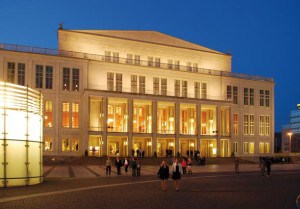 Leipzig Opera House, one of the world’s
best located on the city’s main square. The lighted structure on the left is a (controversial) stairway to underground parking.

One of the world’s finest collections can be viewed at the Museum of Musical Instruments. Housed in the newly renovated Grassi Museum, it is conveniently located near the Leipzig city center, a short walk from the Opera House and the Gewandhaus, the famous concert hall. The Museum, part of Leipzig University, opened in 1929 and contains more than 5,000 fine antique musical instruments. 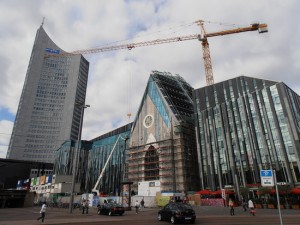 University Church now under construction
replaces an ancient church that survived World War II bombings only to be destroyed under
Soviet rule.

Located on Augustusplatz. the city’s main square, is the new (still under construction)
University Church.  Although the original St. Paul’s Church built in 1231 survived allied bombings during World War II, it was dynamited in 1968 during the communist regime of East Germany. A decision was made not to rebuild the old church, but to build a modern one with a facade that recalls the former structure.

Near Augustusplatz is St. Nicholas Church where the Peaceful Revolution of October 1989
was born.  Following a series of meetings here, a group of people opposed to the Soviet controlled East German government (GDR) lead a peaceful protest demonstration in the city center that drew more than 70,000 people.  Demonstrations continued here and in other German cities and marked the fall of the communist state and the beginning of German reunification.

Leipzig is a city rich in history and musical heritage and an inspiring place to visit.  Learn more at www.leipzig.de/int/en/tourist/; or www.german-travel.