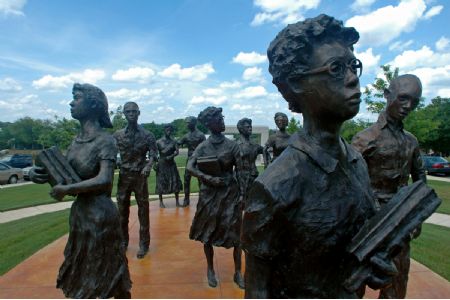 There are many historic sites throughout the nation where important battles were fought, but none more important as the one in Little Rock, Arkansas.  In 1954, the U.S. Supreme Court had ruled that racially segregated public schools and the policy of “separate but equal” was unconstitutional.  The first southern high school to be integrated was in Clinton, Tennessee in 1956.  Months later, on a Sunday morning, three massive explosions demolished the entire building.  School integration was a hot issue, especially in the south. 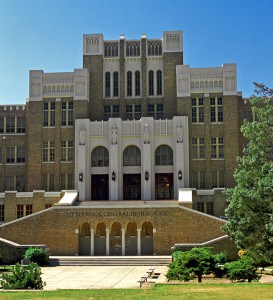 Despite this, Mrs. L.C. “Daisy” Bates who headed the Little Rock Chapter of NAACP was committed to the integration of Little Rock Central High School in 1957. Letters were sent to families with children at Dunbar High School, the black school, asking for student volunteers.  Over 400 students and their families responded.  Dunbar was separate, but far from equal in any respect. When used, outdated textbooks provided by the Little Rock School District were delivered; it was in a garbage truck that dumped them at the front door. 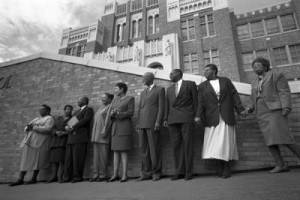 Over 1956-57 school year, the 400 student volunteers were narrowed to nine, the very best students at Dunbar, and the ones best able to meet the many difficult challenges they would face.  Everyone realized it would be an intense struggle, but they were totally committed.  There were training session and detailed plans were made.  But, no one expected that Arkansas Governor Orval Faubus would activate the Arkansas National Guard to prevent the black students from entering the school.

On September 2, 1957, the day before the ten black students were to enter Central High, National Guardsmen surrounded the school. In a televised speech that night, Governor Orval Faubus explained that he had called the National Guardsmen because he had heard that white supremacists from all over the state were descending on Little Rock. He declared Central off-limits to blacks and the black high school, off-limits to whites. He also proclaimed that if the black students attempted to enter Central, “blood would run in the streets.”

The black students did not attend the first day of school.  Early on Wednesday, September 4, Daisy Bates called to tell them that they were to meet a few blocks away from the school and walk in together. Unfortunately, Elizabeth Eckford did not receive the message and attempted to enter the school alone through the front entrance. An angry mob met her, threatening to lynch her, as the Arkansas National Guard looked on. She turned to a white women in the crowd asking for help and the woman spit in her face. Finally, she was able to escape.  The other nine black students were also denied admittance by the Arkansas National Guard, under orders from Governor Faubus. 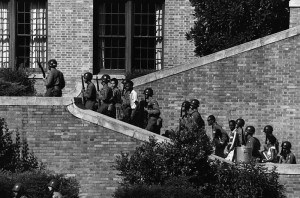 President Dwight Eisenhower received an urgent call from the Mayor of Little Rock asking for federal intervention to avoid a potential “race riot.”  When negotiations between the state and federal officials failed to resolve the situation, President Eisenhower ordered 1,500 troops of the 101st Airborne Division at Fort Campbell, Kentucky to Little Rock. On September 25 (three weeks after the first attempt), federal troops surrounded Central High and escorted the nine black students into the school.  It would be easy to say this was the end, but it was just the beginning.

The events of the following months are well documented in several books, two films, and numerous internet sites.  The troops were removed after several months, but harassment of the black students continued.  However, in May 1958, Ernest Green, Jr. (of the Little Rock Nine) became the first black student to graduate from CentralHigh School.  Dr. Martin Luther King, Jr. attended the graduation ceremonies.

Governor Faubus continued his crusade against school integration.  He was able to secure a public referendum that closed Central High School and Horace Mann High School, the new black school, for the 1958-59 school year.  Called, the “Lost Year” many white citizens blamed blacks for causing the closure.  The Little Rock School Board opened the schools the following year.

At this time the American Friends Service Committee (Quaker) was working with both white and black community leaders to improve race relations and move ahead with school integration. I was on the communications staff at the Service Committee’s nation office at the time and knew Thelma Babbett who headed the Little Rock program.  To visit Central High fifty six years later was a emotional experience for me.

Today, Little Rock Central High School is the leading academic school in all of Arkansas.  Fully integrated it attracts the best students in the city and surrounding school districts.  The National Park Service, with offices across the street from the school, operates informational tours of the building during school hours. This is the only way to visit inside the school and well worth the time.  Learn more at the National Park Service website.  http://www.nps.gov/chsc/index.htm