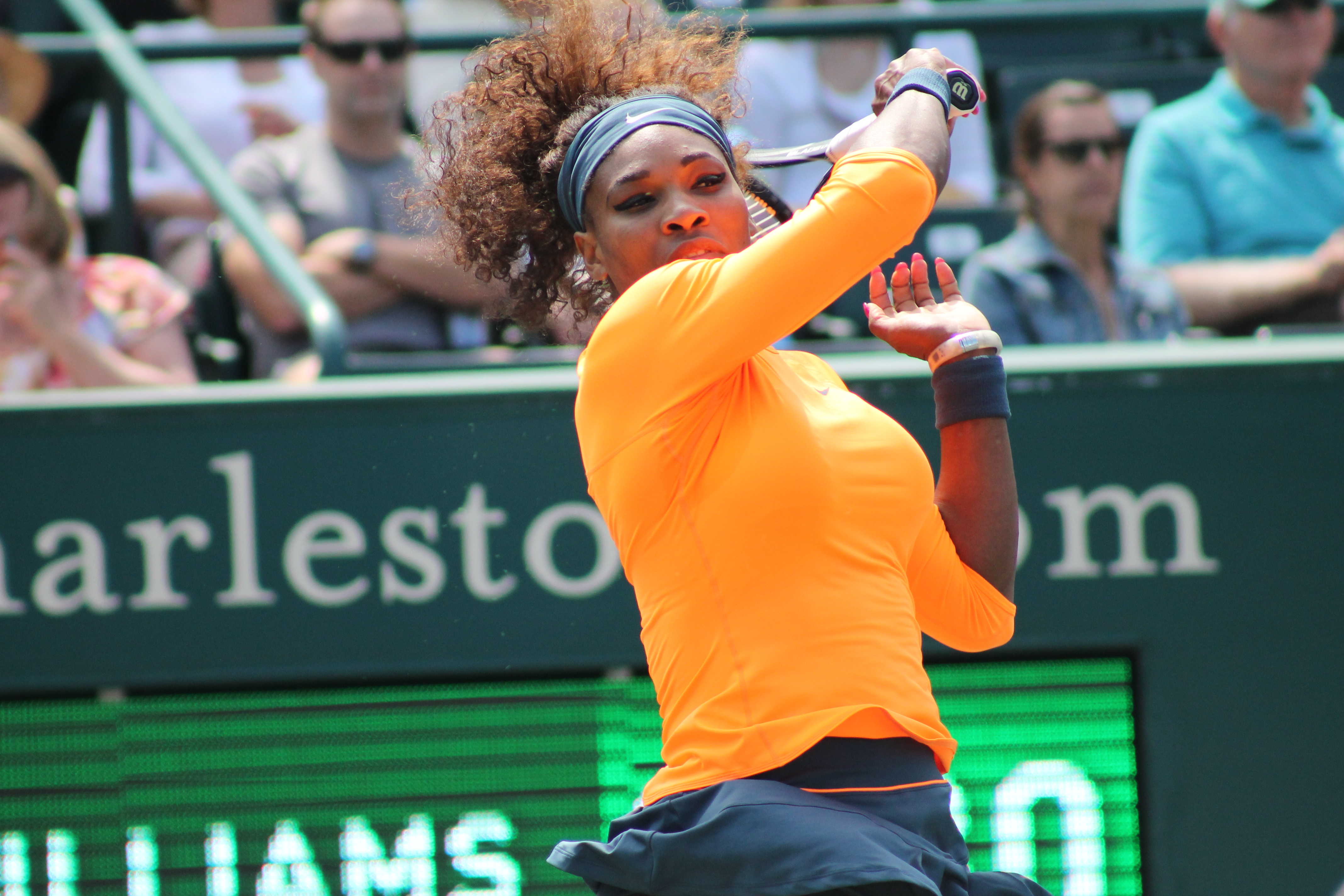 Stories, comments and photos by Will A. Davis

Gallagher’s Travels is proud to be one of the media outlets  chosen to cover the 41-st Family Circle women’s tennis tournament in Charleston, South Carolina March 30 – April 7.

This is the largest women’s only tennis event in the world and will feature five past champions including Serena Williams, Sam Stosur, Caroline Wozniacki, Jelena Jankovic and Venus Williams.

Young American players will be looking to make their mark including Sloane Stevens, Christina McHale and Melanie Oudin to mention just a few.

We will also be doing daily coverage of many of the off court events including the outstanding programs designed for the whole family.

Scroll down to follow the daily stories and photos from the Family Circle Cup !

Opening Day !  Fun for Kids, Nerves for Qualifiers.
The 2013 Family Circle Cup opened with thirty two players from around the world seeking to garner one of the eight qualifier slots to Monday afternoons First Round play. 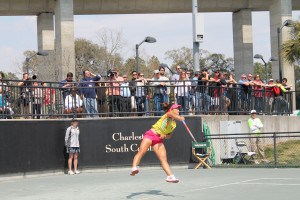 Grace Min with an acrobatic return during her qualifying match
While many fans watched with much interest the match between Charlestonian Shelby Rogers and Grace Min, Min won in a hard fought battle and seeded players such as Jelena Jankovic and Sabine Lisicki sharpened their games on the practice courts. 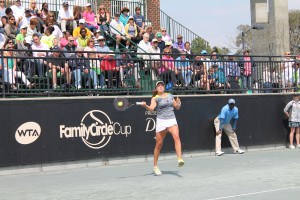 Shelby Rogers returns serve during her match with Grace Min
Practice time in tennis is much like golf practice   rounds where players are more laid back and accessible often joking with fans or being available for photo ops.
Kids also had the opportunity to participate in various activities from face painting and magic shows to tennis oriented events like learning to volley and returning a serve by hitting a service by an automated server. Shops and boutiques were open for those who wanted to shop between matches and the Racquet Club was serving good eats along with many other vendors. 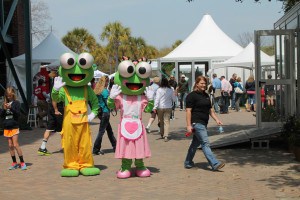 Play began today at 1 p.m. with the continuation of the qualifying rounds. The passion of the players to reach the main draw is evident in the close scores and excitement in many of today’s matches.

An Easter Egg Hunt with over 3000 “hidden” eggs was a fun event for the children and adults.

Qualifying rounds will continue Monday morning and first round play will begin on the Billie Jean King Court, the Althea Gibson Court and Courts 3,4,and 5.

Titanic catches were the rule of the day as three set struggles and tiebreakers were in abundance. A beautiful day gave it’s wings to the First Round of the tournament and Julie Hampton and Olga Govortsova did not disappoint with an epic two and one half hour battle with Govortsova taking the match.

Other three set battles were staged by Francesca Schiavone and Silvia Soler-Espinoza, Jessica Pegula and Garbine Muguruza, as well as Vavara Lepchenko and Chistine McHale.  #12 Seed Lepchenko as well as Soler-Espinoza and  Pegula were the victors and moved ahead to the next round.


The Jankovic/Oudin match is now into it’s third and decisive set in a classic see-saw stuggle.

The most interesting event of the day has been the wheel chair tennis. Incredible movement and talent. Talk about dedication ! See pics added.  Caroline Wozniacki, and Jelena Jankovic moved forward. 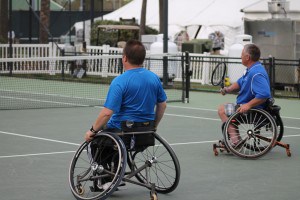 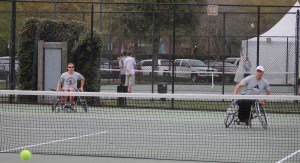 Day 6-Thursday April 4
Heavy rains have postponed most of the matches for the day events. The night events are on hold to see how the weather man treats things ! Some matches were completed with #3 Seed Samantha Stosur having to retire because of a leg injury. (Perhaps fom playing in the rather damp and cold evening match as it seemed an injury she had been rehabilitating gave out.)) 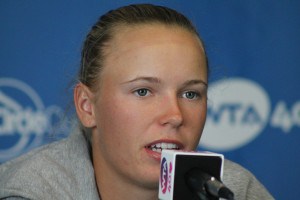 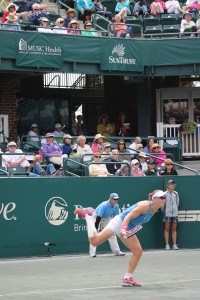 Day 7-Friday April 5-
Many of the players today will have to play two matches today as a result of the rain out for most matches yesterday. Venus and Serena Williams are included in that group. Two key macches today included Madison Keyes one of the two remaining Americans in the tournament moved on with a thrilling two set victory over Bethanie Mattek-Sands, and Venus Williams defeated Vavara Lepchenko in her match. Both will play a second match this afternoon. 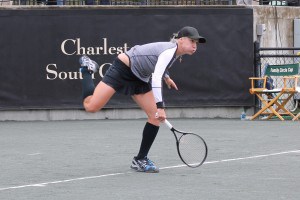 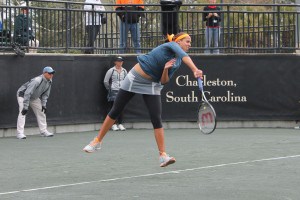 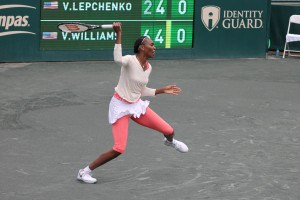 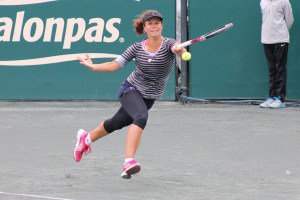 Second matches of the day have begun for some  with Venus Williams facing off with Madison Keys also the second go round for Keys today, now the only American remaining form the “Young Americans” group  which so impressed tennis fans at this Family Circle Cup 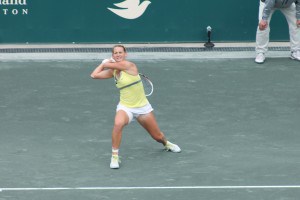 Stefanie Voegele’s upset of #2 Seed Caroline Wozniacki has set up a dream match for the FCC  event as today #1 Seed Serena Williams the top ranked player in the world will meet her “big” sister Venus in one of the two semi-final matches today. It is their first on court meeting since 2009. Venus Williams has been battling a auto imuune problem for the last year or so and it might tell in the match as she had to play two matches on Friday because of the rain outs on Thursday. Serena also had to play back to back matches on Friday. The other semi final match is between the aforementioned Voegele and the #9 Seed here Jelena Jankovic who has been playing very well all week.