Love Is in the Air in St. Michaels! 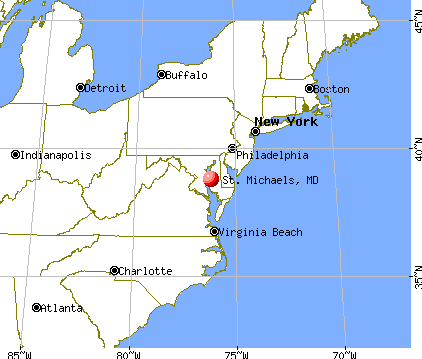 Unlike the path of Cupid’s arrow – straight and true – Maryland Route 33 snakes its way through Talbot County from Easton to Tilghman Island. When the highway passes through the heart of St. Michaels, it runs by Christ Church and the local food pantry on Talbot Street.

The Pantry is housed at Christ Church and staffed by church volunteers. It serves any Talbot County resident who requires food assistance. It is supported through individual food contributions and financial donations. 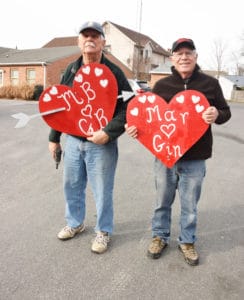 Heart Hangers. These gallant gentlemen don’t wear their hearts on their sleeves but climb ladders and post the hearts on utility poles along Talbot Street St. Michaels.

When it comes to fighting hunger, St. Michaels appears to be all heart – in more ways than one.
Driving into St. Michaels, Maryland, on Talbot Street, symbols of affection catch the eye. Crimson hearts on the utility poles with names of couples painted in white hang curbside on telephone poles as the traffic passes.

Walking along Talbot Street and taking photos of all the posted hearts would take some time. Early in the fundraising campaign, the hearts totaled 25 in number. The total has grown exponentially over two weeks.

John Booth and his wife Bonnie started this as a fundraiser for St. Michaels Community Food Pantry which is located in the Parish Hall of Christ Church. The Pantry is open two days a week. They are currently in their 7th year. 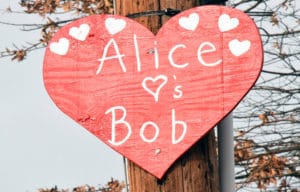 The small white hearts indicate on the large heart the number of times Alice or Bob – or both have supported this annual St. Michaels fundraiser.

The lumber to make the painted wooden hearts was donated by The Lumberyard owners Marge and her husband JD. Heather Sally from Five Gables Inn handled all the paper work for the heart orders and actually did the hand lettering while John and his friend George Clark cut the symbols out, sanded them and painted them.

“The first year we did 97 hearts and sold them at a cost of $50 per heart,” said John Booth. “The posted hearts are not returned to those that bought them because we put them up again next year. They have to pay $50 again,” he explained.

Some of the posted hearts have small little white hearts painted on them. That indicates that the heart has been hung for another year. Local visitors start to notice the hearts exhibited on utility poles each year toward the end of January. They remain posted until President’s Day weekend.
“This year we hope to get 250 hearts hung,” said Booth.

Several other times throughout the year, other hangings – patterns – are affixed to the poles. At Christmas, there are gold stars. Shamrocks are placed on Carpenter Street and on certain buildings. “We only get 25-30 of those placed at $100 each,” said Booth.

“SMASH is another wonderful fundraiser -St. Michaels After School – is placing large cutout crayons on the poles,” said Booth. “Those are done for $25 each, and they have anywhere from 100 to 200 hung.”

The funds raised from the SMASH (St. Michaels After School) crayon campaign go to support after school programs in St. Michaels.

Robert and Alice Petizon lend a hand with the posting of the hearts. “I’m helping Bonnie out because her husband is no longer able to put the hearts up,” said Alice Petizon. “My husband and I agreed to take on that part of the project, but they (John and Bonnie Booth) are the impetus, founders, and guiding light of the project.”

St. Michaels is fewer than 200 miles from Hampton Roads. It is only 80 miles southeast of Washington, D.C. It is full of friendly people, great food, and numerous shops. There are museums, places to stay, and opportunities for outings on the Chesapeake Bay. 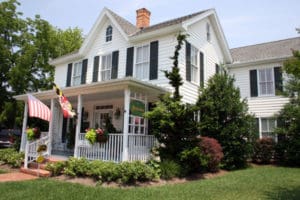 Right on Talbot Street – Route 33 – within walking distance of everything in St. Michaels is Five Gables Inn where visitors can stop, stay, and visit with John and Bonnie Booth, owners and operators of the inn – and initiators of St. Michaels heart project.

“My passion is the food bank – what comes out of the hearts. It’s not about me,” said John Booth. “As of a few days ago, 150 hearts had been hung.”

Driving through St. Michaels before Valentine’s Day with the dozens of inscribed red hearts posted on nearly every telephone pole on Talbot Street, it was apparent that – in St. Michaels- love was surely in the air. 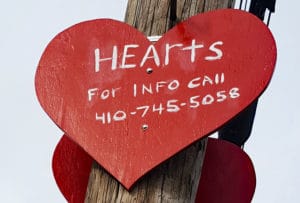 Local folks and caring visitors may call this number to arrange contributions to the food bank.

That is manifested in more than one way in this caring community on the Miles River. Those who buy the hearts and have them placed, love and care deeply for the person whose name is cited on the heart.

For John and Bonnie Booth, that too is also true. Without a doubt, the Booths have an affection for the St. Michaels Community Food Pantry and the members of the community that it serves.