Lufthansa Crew Takes Off In Traditional Bavarian Dress During Oktoberfest 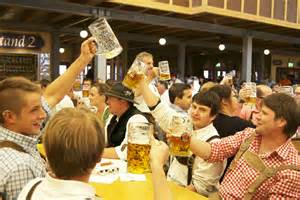 By Jim Weaver
During the Oktoberfest season (September 21 to October 6), Lufthansa’s cabin crew will dress in traditional costumes to get passengers in the mood to celebrate the annual Bavarian festival on flights from Munich. The special “Oktoberfest crew” are part of an ongoing tradition that has proven popular with passengers. Fourteen in-flight teams, consisting of twelve female and two male flight attendants, will be heading to destinations in North America and Japan. 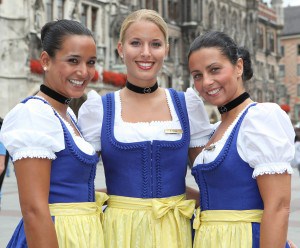 The traditional Bavarian costumes worn by the crew are provided by Angermaier Trachten, specialist outfitters based in Munich. The dirndl designed for the flight attendants reflects Lufthansa’s corporate colors – royal blue, yellow and white. The bodice is yellow with delicate blue printed flowers, while the skirt is blue-and-white striped and will be worn with a blue silk apron. Male flight attendants will wear lederhosen, combined with a janker – the traditional Bavarian jacket – and a waistcoat. Their ties will complement their colleagues’ dirndls.  During the Oktoberfest, Lufthansa’s customer service staff in Munich are encouraged to wear their own traditional Bavarian costumes to work. 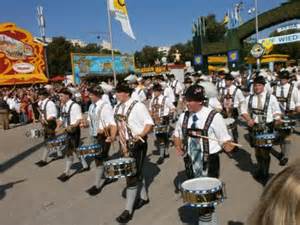 The “Oktoberfest on board” theme is not only restricted to Munich. In September and October, Business Class passengers on all long-haul flights departing from Frankfurt, Munich and Düsseldorf will be offered a range of Bavarian delicacies. These include hearty specialties such as landjäger and radi (cold smoked sausage with radish), trout, tafelspitz (boiled beef), obazda (a spicy cheese specialty) and knödel with schwammerl (dumplings with mushrooms).

Meanwhile, on the audio channel, a special program will offer Bavarian music to get passengers into the Oktoberfest mood. 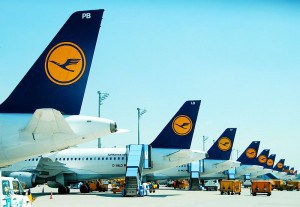 Its been more than 50 years since Lufthansa flight attendants first exchanged their uniforms for traditional Bavarian costumes. In 1957, the airline reported: “During Oktoberfest, Lufthansa stewardesses dressed in dirndls will be tending to the needs of passengers aboard the Super Constellation from New York to Hamburg. In 2005, after an interval of a number of years, Lufthansa revived the Oktoberfest crew tradition.