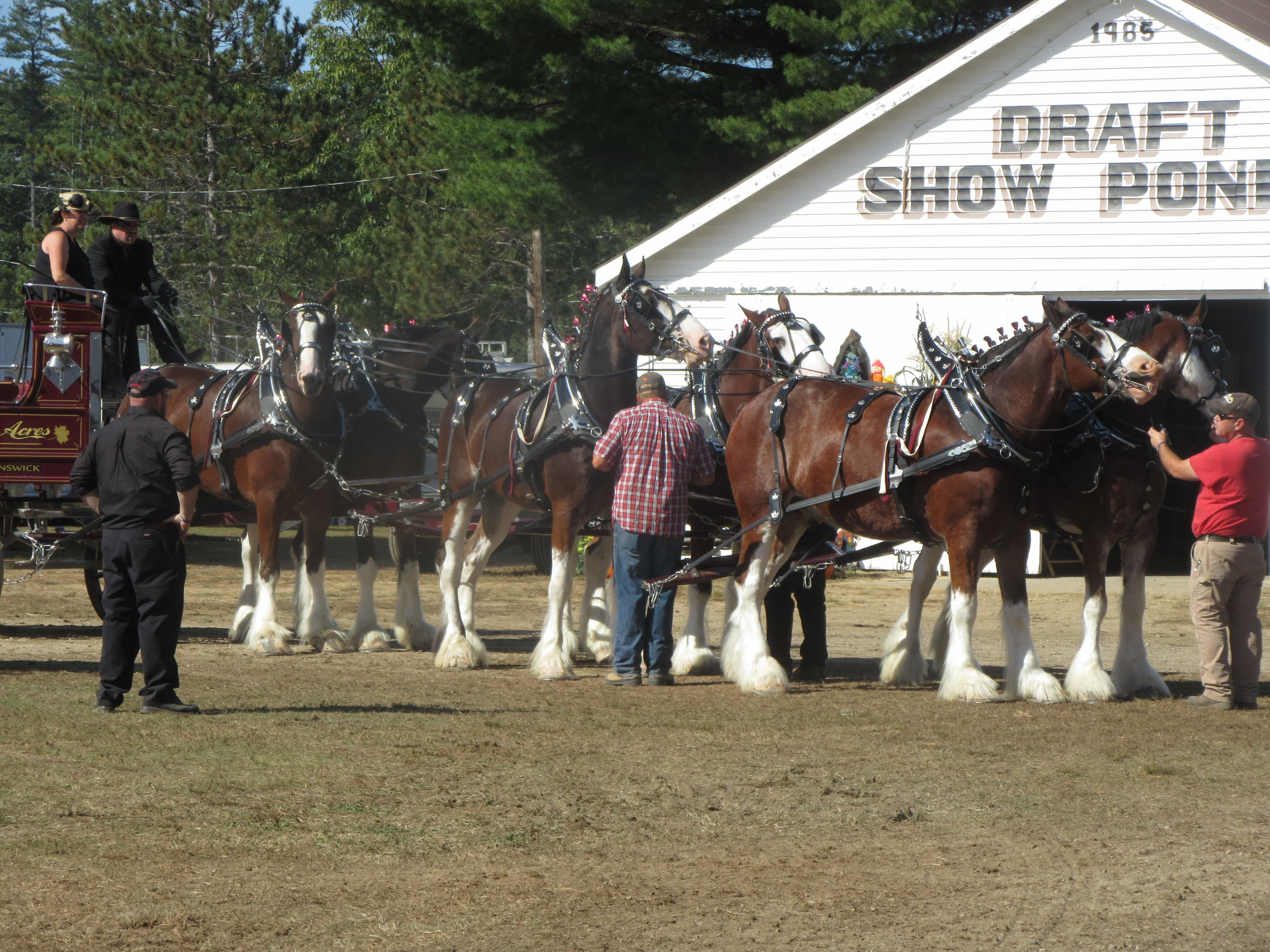 Story and photos by Will A. Davis

Some things after 166  years are just old. Some things just keep getting better. The Fryeburg Fair the second largest agricultural fair in the United States is one of the latter. Not only better but bigger and in this case, bigger is better. 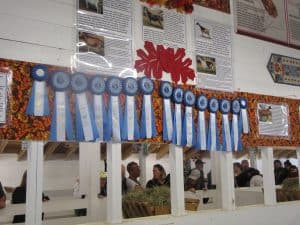 I first visited the Fair many years ago as a young boy with my parents and over time I have been back many times and probably enjoying it more than ever.  Many we met had been coming for multiple years and some since childhood like myself.

Maine’s Blue Ribbon Classic always held the first week in October, is a harvest of agricultural adventures as well as a myriad of gastronomical choices to the delight of almost anyone’s taste. Not just fried food anymore! (Although still plenty of those choices.) We had Mexican, pizza, lots of french fries, egg sandwiches for breakfast,  giant turkey legs are available, Gyros sandwiches, bacon anything, stuffed potatoes, meatball or sausage heroes and a few dining halls. Actually, there is a food booth of some kind every few yards. 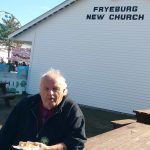 The author refueling and resting for the next round!

The Fryeburg Fair seems to be a right of passage for many as winter looms in New England after the kaleidoscopic treasures of the foliage season and an earlier fair season in many northeastern states.

Fryeburg is a small town on the border with New Hampshire, near the White Mountains and is also noted for the oldest academy style public and private school in the country: Fryeburg Academy.  But it’s the Fair that really puts Fryeburg on the map for a least one week every year. 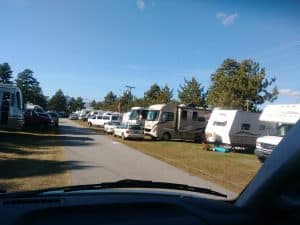 You can travel to the fair by car or as we did take your RV and park in one of the two campgrounds located right across the road from the grounds. Sure makes for an easy “on foot” commute! At any rate, once you enter through the gates the choices are enormous. The Flower Show is a great way to start. Watch beautiful arrangements being made and then auctioned off.  Then go out and steps away to the Water Wheel Park area, listen to some great and diversified music and check out your fair map for areas of interest.

The Midway is almost always open so that is an option especially for kids  (young or old ) looking for fun and thrilling rides.

It is best to plan two to three days at the fair. Speaking of kids don’t miss Old MacDonald’s Farm a learning and visual treat for the little fair visitors! 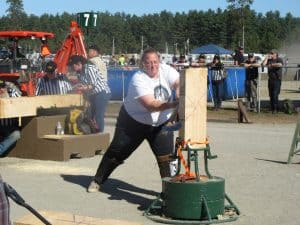 Spectacular events happen every day from the opening parade on Sunday, the world-class Woodsmen’s Field Day on Monday (Get there early!), harness racing from Tuesday until Sunday and many other events such as the popular Skillet Throwing Contest for women and the anvil toss for men.

It’s sheer delight watching the kids chase the piglet of their choice (or not) in the  Pig Scramble. Men and women compete in the Pulling Barn where powerful oxen and horses vie to pull the most weight the longest distance.  Four H Clubs have their own display areas and are always fun. Poultry, rabbits, cows, horses, llamas, donkeys and other farm animals are on display at one or the other of the many buildings on the fairgrounds. 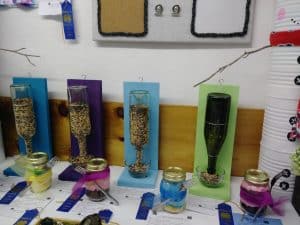 We didn’t always agree with judges choices for blue ribbons but the creativity and devotion by competitors of every age were impressive.

A large and could be larger Fiber Center building held everything for knitters, weavers, and crafters using wool, fur, and other natural materials to create hats, gloves, socks, blankets, rugs and more. Llama wool and a large wallboard with samples of fur from various dog breeds were particularly interesting. 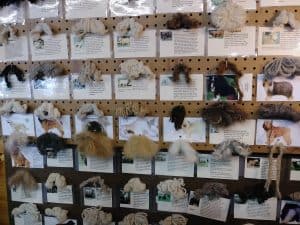 Educational board identifying and samples of dog hair for knitting?

If your a little shaky on your skills lots of booths offered kits for almost anything you can think of. Felting was very big too in wall masks, other decor items as well as hats etc. 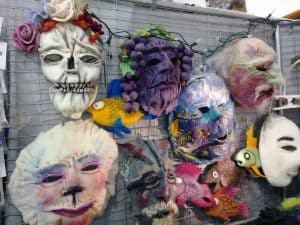 Incredible Felted Masks in the Fiber Arts Building at the Fryeburg Fair.

Directly across the way were the Llamas, always crowd pleasers. 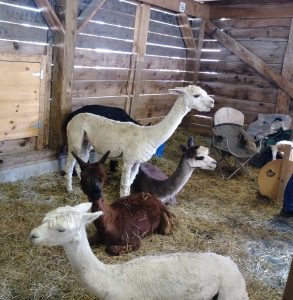 Sheared Llamas at the Fryeburg Fair. 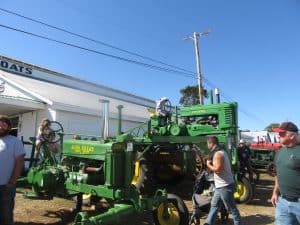 Commercial Row features the latest in new farm technology, home, building and many other offerings and as always the ever happy ever present “barkers” sellingtheir “miraculous” goods to any and all! Confession: I did buy a tube of TopBrite metal polish which amazingly doesn’t work as well at home!

The entertainment at the fair goes on continuously from the four stages to roving instrumentalists and other unique performers (Professor Paddy Whack!)  The main stage at the race track stands features nationally famous acts. Over the years performers such as Clint Black and Lady Antebellum have appeared just to name two. These are free concerts that are part of the daily admission. Daily admission also allows guests to can come and go as you please via a hand stamp.

Formed in 1851 as the West Oxford  Agricultural Society by a gathering of like-minded individuals to preserve, protect and endorse the agricultural lifestyles of many people, the Fair has grown each year by putting funds back into the Fair to repair, add new and modernize many of the buildings as well as creating new and lasting events. Most importantly retaining the country flavor that attendees cherish.

Even the parking can be unique as many village residents offer up their yards as pay parking lots providing a fun and convenient income for the individuals involved via the public’s dollars. Of course, large traditional parking lots are located in different areas surrounding the fairgrounds also.

Add the fair to your calendar for next year September 30-October 7, 2018. RV spots need to be reserved early too. I don’t think you will be disappointed.

For further information on the fair please see the link below.