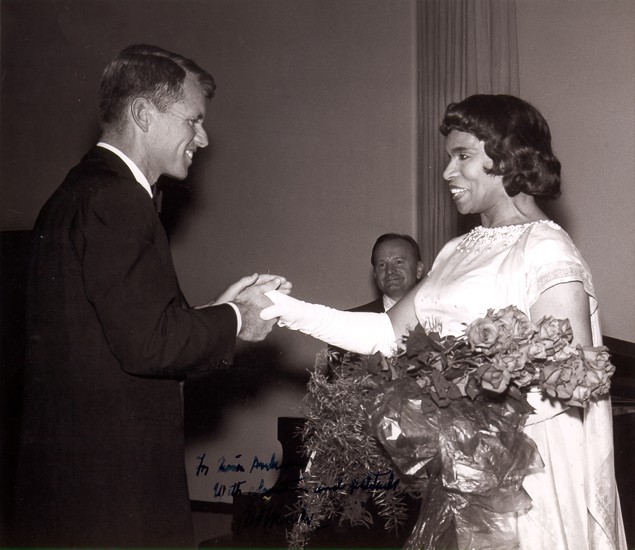 The orange-and-black velvet ensemble Marian Anderson (1897-1993) wore during her Easter Sunday performance on the steps of the Lincoln Memorial in 1939 has entered the collection of the Smithsonian’s National Museum of African American History and Culture.

Occupying the last available space on the National Mall, the Smithsonian’s National Museum of African American History and Culture will be situated prominently between the National Museum of American History and 15th Street, next to the Washington Monument. When it opens to the public in 2016, the museum will be a centerpiece venue for ceremonies and performances, as well as a primary exhibition space for African American history and culture

In honor of the 75th anniversary of that historic concert—one seen by more than 75,000 people gathered at the Lincoln Memorial—the museum will put the classic skirt and blouse on display at the entrance to its gallery in the Smithsonian’s National Museum of American History. It will be on view from Tuesday, April 8, until September 2014. April 9 is the 75th anniversary of the concert. 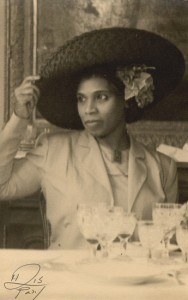 The concert attire is part of a collection donated to the museum by Ginette DePreist, the widow of the celebrated conductor James DePreist (1936-2013) who was Anderson’s nephew. Also in the collection is a framed photograph of Anderson posing with other luminaries who, in 1978, were the first recipients of the Kennedy Center Honors: Fred Astaire, George Balanchine, Richard Rogers and Arthur Rubenstein. Also in the collection is the blue dress Anderson wore to that awards ceremony.

“We are always looking for iconic pieces from iconic moments and Marian Anderson singing at the Lincoln Memorial falls under that heading,” said historian Dwandalyn Reece, curator of music and performing arts for the museum. “Marian Anderson wanted to be known as a singer, and she also recognized her place in history. This ensemble gives us the opportunity to discuss her career and her impact from a three-dimensional perspective.”

The fabric for the form-fitting blouse is shantung silk, historically from the province of Shandong in China, and often used for bridal gowns. The trim and matching buttons are made of black, crepe-back satin and embellished with gold sequins, miniature gold braid and glass turquoise beads in a geometric pattern. The trim circles the neck, waist and cuffs and runs the entire length of the bell-shaped sleeves. The full, flowing skirt is made of silk velvet; it is gathered and attached to a yoke at the hip. The back of the skirt is longer than the front and features a sweep train, also known as a chapel train.

Ginette DePreist had the blouse repaired shortly before Anderson’s death in 1993. She hired a French tailor to replace the original low-pile fabric with shantung silk in the exact shade of orange. She added set-in sleeves, a wide box pleat and shoulder pads; it was shortened to reach mid-hip. The renovated blouse makes use of the original jeweled trim and matching buttons. The velvet skirt has had no changes. With permission from Anderson, DePreist actually wore the ensemble to a ball in Philadelphia, one honoring her husband’s work as a conductor, but she knew nothing of the story behind what she was wearing.

“It never occurred to me to ask Aunt Marian where she had worn that dress,” said DePriest. “I had no idea it was the dress until I saw a picture of her in it after the [Lincoln Memorial] performance. I get terribly emotional about it. She and my husband [James DePreist] were very simple people. She didn’t want it that way, but that day she stamped her name in the book of history.”

By the time Anderson gave that Lincoln Memorial performance, she had established a stellar reputation in Europe. But despite her successes abroad, racial discrimination in the United States continued to create obstacles in her career. Howard University wanted to host Anderson for a concert engagement in Washington, D.C., and approached the Daughters of the American Revolution about using Constitution Hall. DAR had a policy that barred the use of the hall by African American performers, and Howard had made similar requests in the past without success. Once again, the DAR denied the concert planners’ request. DAR’s refusal to let Anderson perform at Constitution Hall became a national story when First Lady Eleanor Roosevelt publicly resigned her membership in the organization: “You had the opportunity to lead in an enlightened way, and it seems to me that your organization has failed.” In response, Walter White, executive secretary of the NAACP, and Secretary of the Interior Harold Ickes arranged for Anderson to give a public concert on the steps of the Lincoln Memorial on Easter Sunday, April 9, 1939. 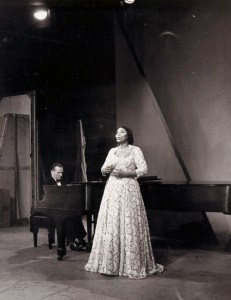 It was a watershed moment in civil rights history, with Anderson providing music celebrating principles of freedom, justice and equality. At 5 p.m. on that day she sang “My country, ’tis of thee, Sweet land of liberty, of thee we sing.” Many historians believe Anderson’s slight change in the lyric, “I” to “we,” captured the significance of the moment, echoing the collective sense of responsibility shared by so many on that important day.

Despite the fact that she was the country’s third-highest concert box office draw in 1939, Anderson was still subject to the racial bias of the time. When she traveled in the United States, she was restricted to “colored” waiting rooms, hotels and train cars. Her European debut in Berlin in 1930 paved the way for command performances before King Gustav in Stockholm and King Christian in Copenhagen. She sang in German, Russian, Swedish, French, Italian; she sang arias and spirituals.

A year after her successful Carnegie Hall debut in New York, she became the first African American to be invited to perform at the White House, then sang there again when Franklin and Eleanor Roosevelt were entertaining the King and Queen of England in 1939. In 1955, she became the first African American to perform at the Metropolitan Opera. Three years later President Eisenhower named her a delegate to the 13th General Assembly of the United Nations. And in 1963, President Lyndon B. Johnson awarded her the Presidential Medal of Freedom.

Anderson gave her final performance at Carnegie Hall in 1965. In her later years, she continued to work on behalf of humanitarian causes and in support of the arts. She died at the home of her nephew, James DePreist, in Portland April 8, 1993.

The National Museum of African American History and Culture was established by an Act of Congress in 2003 making it the 19th museum of the Smithsonian Institution. Scheduled to open by the summer of 2016, it is under construction on the National Mall in Washington, D.C., on a five-acre tract adjacent to the Washington Monument. Currently, the museum is hosting public programs, assembling collections and presenting exhibitions at other museums across the country and at its own gallery at the Smithsonian’s National Museum of American History. More information can be found on the museum’s website.