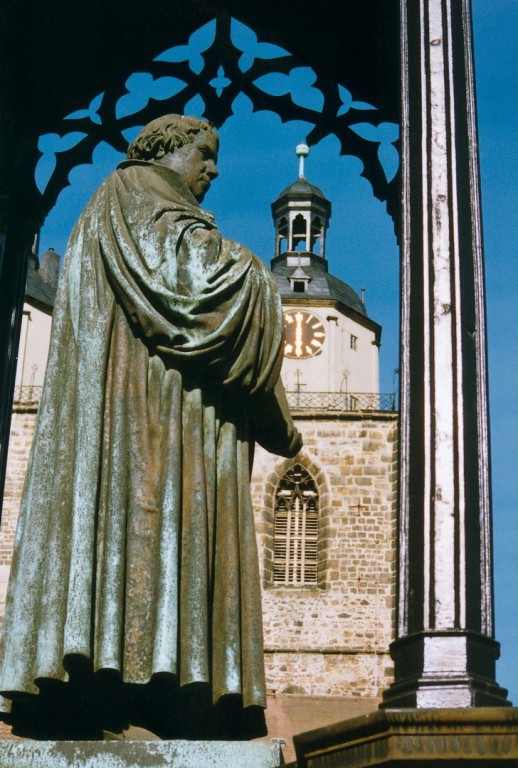 It’s so important an anniversary that a single year of commemoration is not sufficient.  It’s the 500th anniversary of Martin Luther’s Reformation and during the decade ending in 2017 a series of events are being held to mark the anniversary. It may be helpful to know that Luther was nine years old when Columbus discovered America.

Actors pose as Luther and his wife

It can be rightfully said that no one in the past 500 years has had a bigger influence on religious belief and practice than this German university professor.  For those who may not know the story, the Roman Catholic Pope was raising money to help pay for construction work at St. Peter’s Cathedral at the Vatican by selling indulgences (get out of hell tickets) to poor believers.

Luther thought it wrong and said so in writing in what became known as his 95 Thesis.  It got him in a lot of trouble and might have cost him his life without the help of some friends in high places.  Luther was a Catholic monk and was promptly excommunicated, but there were other reasons he displeased church leaders.  He helped 12 young nuns escape from a convent in empty fish barrels and married one of them, Katharina von Bora. He also began teaching that all sin was forgiven by God’s grace (love) not through good works and further, in the priesthood of all believers (direct access to God), both in opposition to Roman Catholic doctrine.

While he was hiding out from those who would have killed him (he had a price on his head), he translated the Bible from Latin to German.  In the next decade thousands of German Bibles were in circulation and the flames of reformation were spreading throughout central Europe.  Luther’s Bible later became the basis for the St. James version in use today.  He also wrote some hymns including “A Mighty Fortress Is Our God” a standard heard in many churches today.

Today Germany is a predominantly Catholic nation and Pope Benedict is German.  I recall once asking my guide at the Cologne Cathedral (Catholic) if it had ever considered adopting Lutheranism. In the old days, he said, they would beat up Lutherans and drive them out of town. In Heidelberg, however, the main church is Protestant and has been for many centuries. 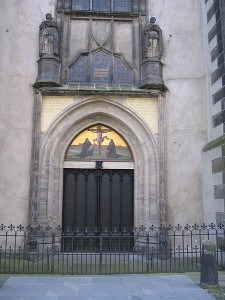 Lutherstadt-Wittenberg, known as the ‘Cradle of the Reformation,’ is where Luther lived and worked for much of his life.  It’s a lovely town and the sites associated with Luther are all within easy walking distance.  Castle Church (officially All Saints Church), where Luther may or may not (there is no clear evidence) have nailed his 95 Thesis to the door is a must for visitors. Luther is buried here in a simple stone sarcophagus below a beautiful hand carved wooden pulpit.  There is a tourist information center directly across from the Castle Church where you can see an excellent video about Luther.  My favorite Luther quote is “Trust God and sin on boldly.” 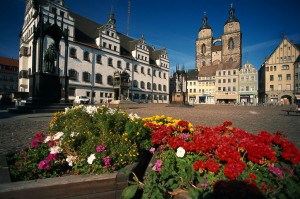 The Lutherhaus (Luther house) is a former Augustinian monastery building where Luther lived and taught.  It’s a museum today and preserved much as it was 500 years ago.
Other must-sees include the pulpit from the Town Church (officially St. Mary’s) where Luther preached and was married, and the Refectory with the Ten Commandments painting by Lucas Cranach the Elder, a Lutheran Bible from 1534, a portrait of Luther from 1520; and a letter of indulgence.

There are many good places to stay in Lutherstadt-Wittenberg.  No coincidence, we chose the Luther Hotel (with a contemporary bronze statue of Luther in the lobby), a new hotel near local attractions with a good restaurant and top floor sauna.  See www.luther-hotel-wittenberg.de. .

It’s clear you don’t need to be a Lutheran or of any faith to find Wittenberg and its unique history of great interest.  Learn more at www.visit-luther.com.  and  www.lutherstadt-wittenberg.de. .  Also see www.germany.travel/